By any reasonable standard, Cam Doody's done pretty well for himself – he's a co-founder of Bellhop, now the nation's No. 2 moving company according to U.S. News & World Report, and is a founder and managing partner at Brickyard, a business incubator.

That's a lot of good decisions made along the way. But Doody says the best decision he ever made happened long before Bellhop or Brickyard.

"Auburn University," the 36-year-old says. "I grew up in Knoxville. My best friends, parents and brothers are still there.

"(Auburn) was a departure from that culture. It felt like a different planet. To go there and meet a completely different group of people, I was happy to have been able to do that."

But school generally? Not so much.

"Wasn't something I was all that interested in," Doody admits. "Never really took it seriously. Did the bare minimum to get by."

He graduated in 2009, in the midst of what would become known as the Great Recession.

"I had a lot of anxiety," he recalls. "I wanted to start marching, but nobody was hiring. A lot of my friends just took a year off."

Doody says he eventually landed a job at a large international bank where his brother-in-law was one of "50,000 or 60,000 employees." He remembers punching in and out for the day. Helping customers with PIN numbers for their debit cards. And the whole thing "scared the dog (crap)" out of him.

"It was why I didn't like school," he says. "I was learning what somebody told me was important. I wanted to get on the internet and go down rabbit holes. I wanted to do something with autonomy. I wanted to start a company -- I just didn't know what."

Turned out it was a company that specialized in helping college students move into their dorm rooms. The idea struck around 2011, about the time that everybody began to have mobile technology in their pockets.

"We built an app connecting students. The supply already existed," he recalls. "We just had to connect the dots."

That business is now Bellhop, which, as of last summer, had completed more than 300,000 moves in the last decade and operates in 24 states and the District of Columbia. Doody says that in 2012, he and co-founder Stephen Vlahos moved to Chattanooga to get their new business under the wing of the Lamp Post Group. Doody had also recruited Matt Patterson, whom he'd met at his banking job.

"Matt was a legend," Doody recalls. "The average telephone banker there was making 70 or 80 calls a day. Matt was making 400. He was just a machine. We scaled a medical equipment company (later). He was head of operations; I was head of sales. We realized how well we worked together."

Ted Alling and Barry Large of Lamp Post "were these mythical characters," Doody says. "Some of the companies (Lamp Post) invested in a decade ago are among the most prolific in Chattanooga -- Chattanooga Whiskey, Steam Logistics, Reliance Partners," among others.

"Brickyard is really a continuation of Lamp Post with far more resources," Doody says, adding that Alling and Large are among Brickyard's general partners, while he and Patterson are managing partners.

Doody says that as venture capital has been easier to come by over the past decade, the "founder ethos has kind of gotten soft -- there's almost a celebrity to it, founders sitting on panels at this or that conference, spending two weeks in New York or Miami. They don't know how hard it is (to start a company)."

That, Doody says, is why Brickyard's approach is to have founders sign up for at least a year in Chattanooga. There's room for 11 founders in a 7,000-square-foot home 100 yards behind Brickyard's main building, he says, and the incubator has some 40 founders and 17 companies in its fold.

"We're insulating them from that noise and bull a lot of (founders) are participating in," he says, "but not from other founders. Everyone here has opted in for the most hours they'll ever work in their lives. Hype doesn't matter. Grinding matters. Building what the customer wants matters.

"We're building a campus of serious founders," Doody says, adding that each of the companies those founders are launching "has the potential to be the largest employer in Chattanooga."

Many of the new founders will fall in love with the city they're having an impact on, he says. And there's a good chance that in 10 years, Brickyard could bring hundreds of high-growth companies to Chattanooga.

"We all want to be back in the trenches again," he says. "Having Brickyard kind of lets us do that by proxy."

The Brickyard bus just got a lot more crowded.

Some 18 months after the Chattanooga-based startup incubator wrote its first check from a $3.25 million pilot fund raised by its seven managing partners, Brickyard has closed its second fund, having raised $17.5 million from 65 limited partners (LPs).

"And we have the ability to tack on another $2.5 million," says Doody, who added that each of those new limited partners calls Chattanooga home.

"Every one is local, and we did that on purpose," he says, adding that only eight LP candidates passed on Brickyard's pitch.

Doody says that while those pitch meetings took about five weeks, Brickyard's brain trust spent about a year showing those potential investors the incubator under construction.

"We wanted them to see it in process and tell them why we were doing this," Doody says. "Ours is actually a pretty contrarian take on early-stage venture capital. In a world that's increasingly remote, you can build a company where the founders are living in multiple cities.

"Our take is that, if you want to go fast, you have founders come together in the same place, next to other founders at the same stage, and build in person. And we believe in insulating (founders) from noise in the early days. Chattanooga serves a purpose in that it's not a major metro with a ton of distraction," he says.

Doody says money from the most recent fund will go to 10 startups per year for the next four years -- about 100 founders in all, he figures, each of whom will relocate to Chattanooga for at least a year.

"They're committing to relocate to a city they've never been to, or thought about moving to, for the sole purpose of radical focus and building fast toward product-to-market fit," he says.

"This is going to be a lot of work, because the bar for Brickyard is extremely high," Doody adds. "Our expectation for ourselves is that we are the most selective early-stage program in the world." 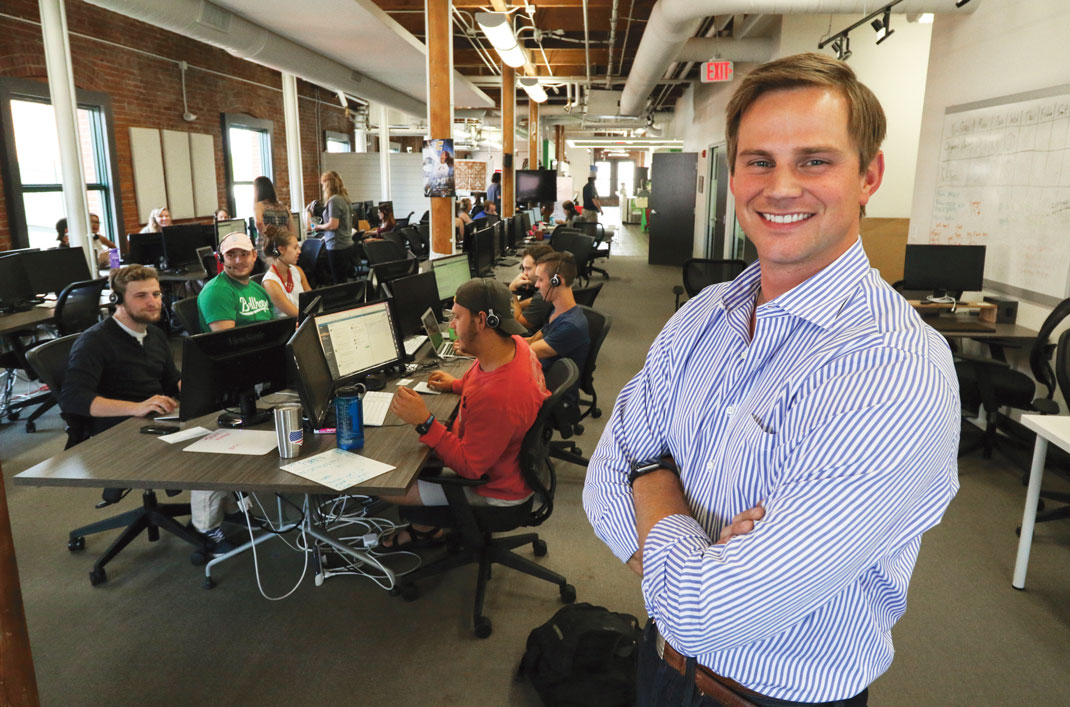 EDGE archives / Cam Doody, cofounder and president of Bellhop, and staff at the company’s office in Warehouse Row in September 2016.