The new year brings with it many traditions: eating black-eyed peas and greens or deep cleaning your home, for example. And another that seems to be growing in popularity: polar plunges.

The name "polar plunge" is nearly a perfect description for the activity, which involves jumping into a body of frigid water, either as a way to raise money for a cause or as a challenge to one's self. The events are often scheduled early in the new year. As Cody Roney, executive director of Lula Lake Land Trust and frequent participant in its annual polar plunge, explains, "I think it's just a fun and sort of symbolic way of washing off the old and welcoming in the new in terms of the new year. It's a very exhilarating experience."

Lula Lake Land Trust, a prime destination for hiking, typically prohibits people from swimming in its iconic lake, which pools at the base of a 120-foot waterfall. The one exception is during its annual polar plunge and fun run, scheduled this year for Jan. 14.

Participants may choose to start the event with a 3-mile run through the property, or they may head straight to the lake for the plunge -- followed by hot cider, hot cocoa and camaraderie around a large fire pit. But amid all the cheer, it's important to take necessary precautions.

"It's best to do a polar plunge with a group of people because many don't realize how slightly paralyzing the experience can be," Roney says. "At Lula Lake, we have someone standing on the bank and yelling at all times so participants can follow that voice." 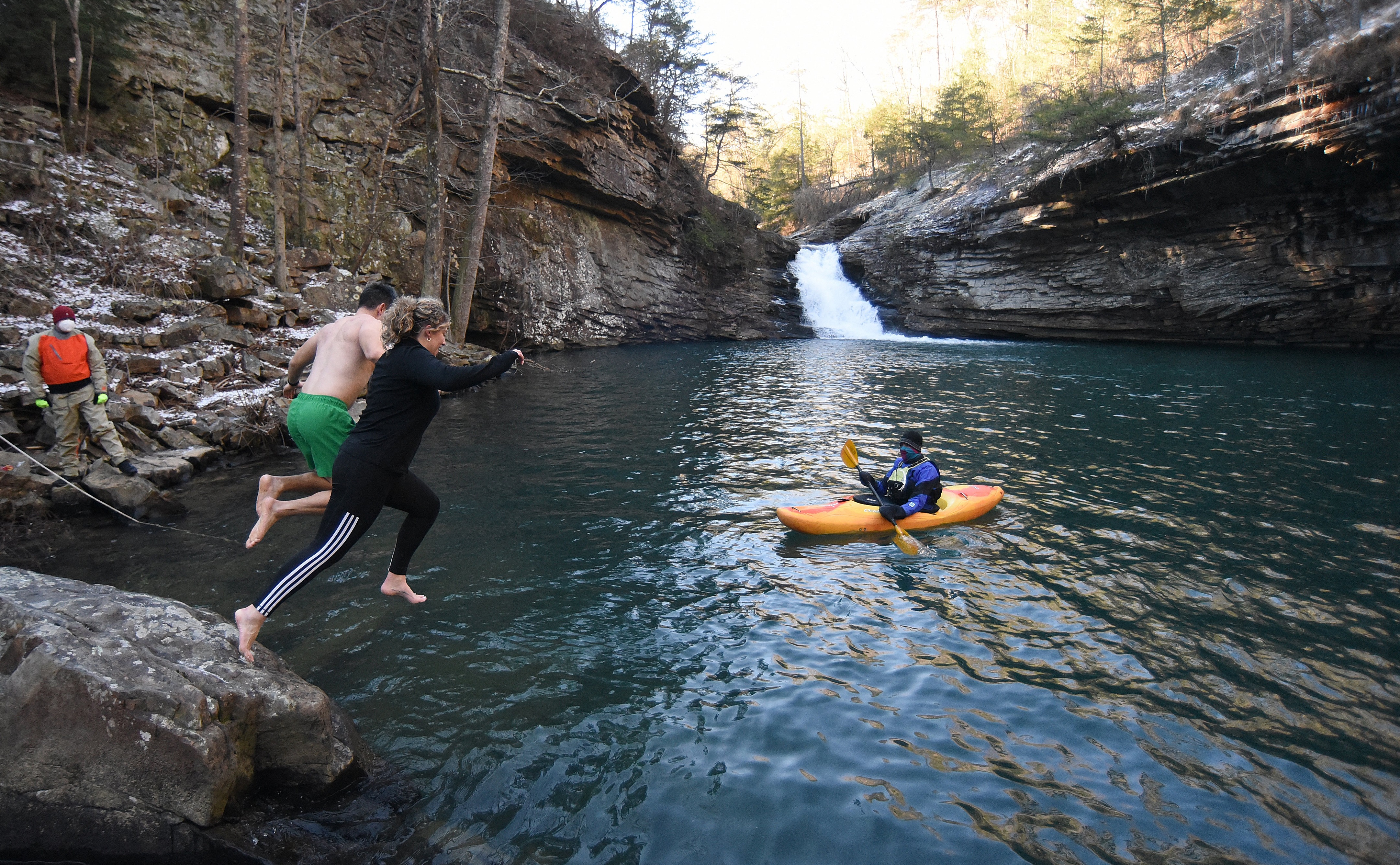 Staff Photo by Matt Hamilton / Atlanta residents Peter Le and Corina Edwards hold hands as they jump into the frigid waters during the 2022 Polar Plunge event at Lula Lake in Lookout Mountain, Georgia.

The trust also has a team of safety boaters in the water as well as volunteers on the bank ready to assist swimmers if needed. Those taking the plunge are encouraged to wear outdoor sandals with foot support to avoid slipping on rocks or ice around the lake, and to bring extra hats, gloves, towels and blankets.

According to the American Red Cross, to prepare for a polar plunge, a person should familiarize themselves with common symptoms of hypothermia, which can include shivering, lack of muscle coordination and impaired judgment. Moreover, they should have someone on the bank ready to hand over dry clothes immediately following the plunge.

"A lot of people think it's a crazy thing to do," Roney says. "It probably is a little crazy, but it's something I would recommend everyone experience at least once."

Tickets for Lula Lake's 2023 Polar Plunge and Fun Run are $50 and can be purchased at lulalake.org.

Other polar plunges in the Chattanooga area