With CCS eighth-grader Aubriyanna Camp putting on a spectacle with 13 of her game-high 37 points in the first quarter, the Lady Red Raiders needed a spark in their Division II-AA East Region battle.

Trailing 15-10 after one quarter, Oleksik scored nine of her team's 24 second-quarter points as Baylor (12-9, 2-0 region) outscored the visitors 43-25 over the next two quarters. Oleksik finished with a team-high 20 points.

The Lady Chargers (14-6, 0-2) fought back from a 14-point deficit make it a five-point game with a minute left. Camp finished 14-of-15 from the charity stripe in the defeat.

Baylor finished the sweep of CCS as the Red Raiders had seven players finish in double figures scoring in a 77-63 win in which Nyziah Whaley led the way with 20 points. Dre Jackson scored 25 for the Chargers. 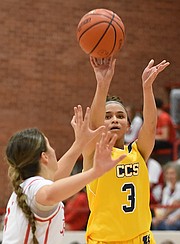 STARS OF THE NIGHT

› Brevin Massengale, Ringgold: He scored 12 of his game-high 25 points in the final quarter as the Tigers topped Coahulla Creek 92-61 to even their Region 6-AAA record at 5-5.

› Matthew Sharpe, Central: The junior guard scored 31 points in a 65-58 loss against Tyner.

› Kimora Fields, Bradley Central: The 6-foot freshman forward made 10-of-11 field goal attempts on her way to 22 points in the Bearettes' 87-33 road win over Ooltewah.

› Tyree Smith, East Ridge: The senior guard scored 29 points and made 11 free throws in a 89-81 win over Signal Mountain.