That was when he received a blessing at a prayer meeting and a sort of calling to speak his mind when necessary.

"If I thought I should, I did," U.S. Navy veteran Stokes said in October as he sat at his home in Bradley County, Tennessee. "I didn't care who it was."

Stokes, 86, is a retired U.S. Navy chief petty officer who volunteered as a 128-pound, 17-year-old farm boy to serve his country in Korea and in Vietnam. He participated in more than 250 combat patrols while engaging the enemy more than 40 times, according to a citation signed by U.S. Navy Vice Admiral J. H. King Jr., who was commander of U.S. naval forces in Vietnam.

Stokes in the U.S. Navy 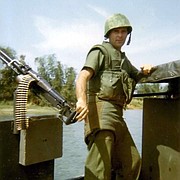 While he was a very young boy, Stokes' family lived in Harrison in Hamilton County until they were relocated in 1937 to the Birchwood area after the Chickamauga Dam became operational and the family home in Harrison was inundated with water. Stokes had a limited education as a child and went to serve his country unable to even write a letter home. Despite his struggles to read and spell, he found he had a knack with numbers and machinery.

Stokes' first assignment was on the tanker U.S.S. Passumpsic, which had the duty of refueling the fleet, a sometimes harrowing experience in rough seas with warships lurching in the waves just feet away from the fuel-filled tanker. The Passumpsic, where Stokes remained for his entire first tour, steamed all over the Korean theater.

After he completed his first tour in 1955, he returned home and married in 1957. But after finding little good-paying work in Tennessee, Stokes decided to reenlist in 1958 and remained in the Navy for another 15 years.

"Chief Stokes' professionalism, courage under fire and devotion to duty were in keeping with the highest traditions of the United States Naval Service," Admiral King wrote of Stokes' year of service in Vietnam from 1969 to 1970.

Stokes said he was just doing what he knew was right, just like he'd done throughout his life.

When Stokes talks of those years, the waves wash over his eyes and his voice is filled with the roar of the sea, the rumble of a PT boat, gunfire and explosions.

The first of his three tours in Korea was a 15-month cruise that included stops in Japan, Philippines, Hong Kong, Formosa, and another stop in Japan before returning to the United States, he said. He said he couldn't count the faraway places he'd seen and, as he described them, his stories jump from one ship to another.

On one occasion, Stokes was on watch around 2 a.m. and he saw a sailor standing near the side of the ship when it became clear something was wrong.

"He stood there just a minute and then he made the sign of a cross," Stokes recalled. "I put my hand over on the life ring, he went over the side and I threw the ring and got on the P.A., 'Man overboard!' and I piped my boatswain's pipe."

The man was brought back aboard because someone was there at the right time.

Stokes went to Vietnam in 1969 at 34 years old. There he served most of his time on a PT boat used to patrol the interior rivers and waterways looking for the enemy and taking soldiers into hostile territory and bringing them back.

"You got used to getting shot at to where it was an everyday thing," he said. "You could hear bullets zinging by your head."

The scariest part of Vietnam for Stokes was patrolling rivers.

"Anytime you went on the river, you could get killed. It didn't matter which way you went," he said.

Stokes seems to see his service as something akin to destiny. He doesn't look back with any regrets.

"I was proud of every minute of it," he said of his service. "Like I tell people, there's a lot of bad times but I'd say the good times outweighed 'em."

He reflected on what he might have done differently.

"I'd probably do some things different but I don't know what," he said. "I always thought I knew what I was doing.

"When I was 5 years old, they had a prayer meeting at our house," Stokes recalled.

After the prayer meeting, Stokes said one of the benches the family used as chairs was used as an alter.

"There were about four or five people went to the alter," he said. "The preacher got down there and was talking to these people and he got down to where I was at.

"I remember him putting his hand on his head and he woke me up," Stokes said. "He said, 'God bless his little heart, he went to sleep praying.'"