The legal contract could help guarantee local hiring, diverse contracting, higher wages and sustainable development related to construction of the recently approved stadium, although the specific goals of the agreement have yet to be finalized by the growing community coalition, which began forming Monday night at a meeting in the City Council chambers, with more than 50 residents and group representatives.

Chattanoogans in Action for Love, Equality and Benevolence, or CALEB, is spearheading efforts to organize neighborhood groups, churches and residents affected by the planned development. Organizers have two weeks to solidify a community coalition that can enter into a legal contract and negotiate commitments from Hardball Capital, which has previously expressed willingness at a public meeting to discuss a deal.

Repeated calls to Hardball Capital CEO Jason Freier were not returned. The city's newly created Sports Authority will meet early next month to secure the lease agreement with Hardball Capital that will play a significant role in the stadium bond repayment.

The group has raised enough money to secure a lawyer for contract negotiations and plans to raise more for attorney's fees.

"As development happens, we need to be engaged, involved. We need to know that we can have amenities and benefits," Janice Gooden, an East Chattanooga neighborhood leader and co-chair of CALEB's economic mobility task force, told those gathered Monday night.

Maria Noel, who heads the South Chattanooga Community Association, said equitable hiring should be prioritized in the agreement, while Marie Mott -- a local activist who is competing in a runoff election for the District 8 seat on the City Council -- said she wants to make sure the people living in the stadium development footprint, being most affected by these decisions, are going to be at the negotiating table.

"We can't have this conversation without talking about gentrification," Mott said. 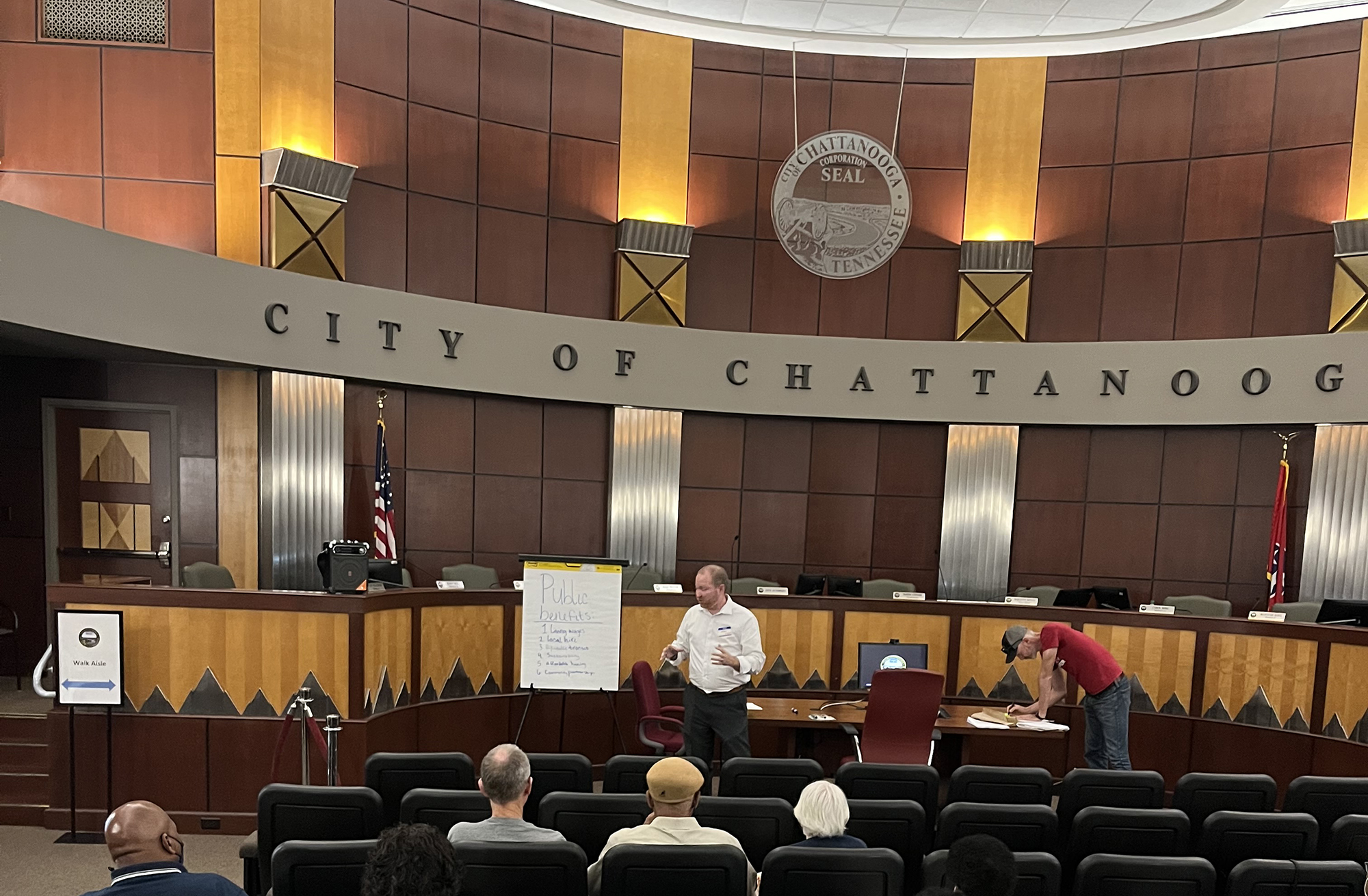 Lori Quillen, a program officer with the Benwood Foundation, said public school impact was her concern, and several others present -- including alumni of The Howard School -- said they wanted any deal to ensure benefits for the school.

"I hope this will be precedent-setting, and that promises made will be promises kept," said Edna Varner, a former Howard principal and one of the newly appointed members to the Sports Authority, which will manage the business of the future stadium for the city.

"The master developer has power and discretion over how this full site is going to be developed, as well as nationally recognized experience in adaptive reuse and brownfield development and its impact on the community," Gilliland said. "We hope to be able to secure clear, explicit community benefits that are going to address and recognize needs for Southside and Chattanooga as a whole."

Such contracts are trending across the nation as communities question the socioeconomic impact of development, especially in light of growing public subsidies and an acute affordable housing crisis nationwide. In some places, elected officials have refused to approve projects in which developers wouldn't negotiate a deal.

An agreement was sought for a $61 million Nippon Paint plant before the pandemic, but a contract was never reached.

Was two weeks enough time, and was it worth the effort, they asked.

"This is history!" Angelica Acevedo, a community organizer with CALEB, told the crowd. "The next time someone comes into our town and tries to build something, we will have the know-how!"

The coalition plans to meet again at 6 p.m. Monday at the City Council chambers to establish priorities and elect members of the negotiating team.