If you’ve been to Athens, Georgia, lately, you know it’s more than a college town. The food scene proves there’s more to this town than Georgia Bulldogs football in the fall. It’s a place where you can sample American classics as well as foods from innovative chefs that take food to a new level of flavor.

The oldest restaurants in town are still going strong. The Mayflower, serving fried chicken and other comfort foods since 1948, is but one example. New restaurants, such as ZZ & Simone’s, offering a brilliant Italian menu, have joined in to help turn this college town into a true dining destination.

“The dining scene has dramatically changed over the past 10 to 20 years, transforming from a landscape of cheap college eats and meat-and-three spots to a vibrant foodie scene full of creativity and variety,” says Shannon Dominy, communications specialist at the Athens Convention & Visitors Bureau.

Here are some examples of that variety and creativity. 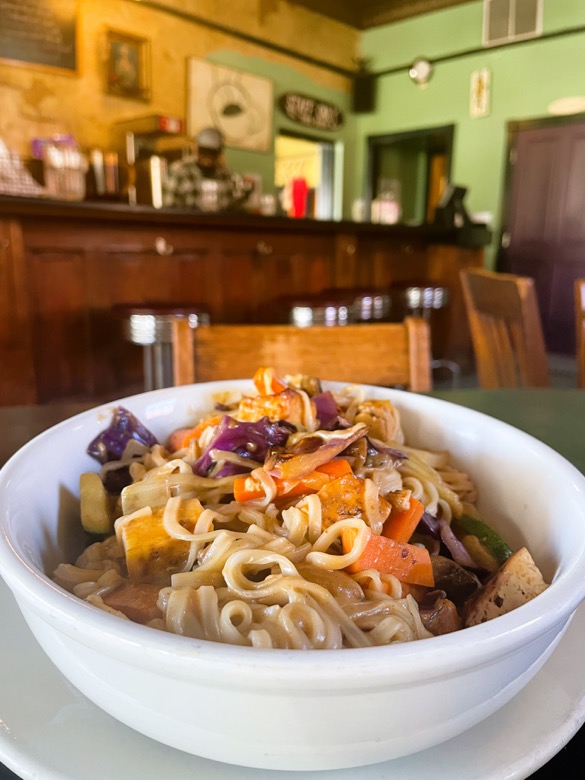 Photo by Anne Braly / Hot noodle bowls are a specialty at The Grit in Athens, Ga. The vegetable and sauce selections change daily, and the vegetarian fare can be adapted to vegan.

The Grit’s been around for a while but still packs locals in as soon as the doors open for lunch each day. Just a step out of the main downtown corridor, this is the place to find some ingenious vegetarian and vegan fare.

“There seems to be more vegan-seeking people these days,” says manager Toby Cole.

Particular favorites are any of the bowls, following a national trend toward big bowls of rice or noodles combined with veggies and meats — or in the case of The Grit, tofu — and some kind of sauce. At The Grit, it’s always some kind of Asian-inspired mixture that changes daily, such as miso-coconut sauce with rice noodles, carrots, mushrooms, onions and zucchini.

Other vegetarian dishes include Tofu Reuben; a falafel; loaded nachos with cheese, black bean chili, onions, sour cream and house-made salsa; and the Grilled Cheese Smelt — billed as Athens’ “biggest and best grilled cheese sandwich.” Most every vegetarian dish can be converted to vegan, including substituting non-vegan for vegan cheese for a $1.50 upcharge. And all desserts — cakes, pies, brownies and cookies — are made from scratch.

The Grit offers substantial seating in two dining areas inside with a mishmash of wall decorations that includes a portrait of Jesus and another picture of Planters’ Mr. Peanut.

Outside, there are a good number of tables surrounding the 1930s-era building in front along Prince Street as well as in the alley to one side. Take a seat on a nice afternoon and sip a glass of wine from the restaurant’s small but broad wine list. 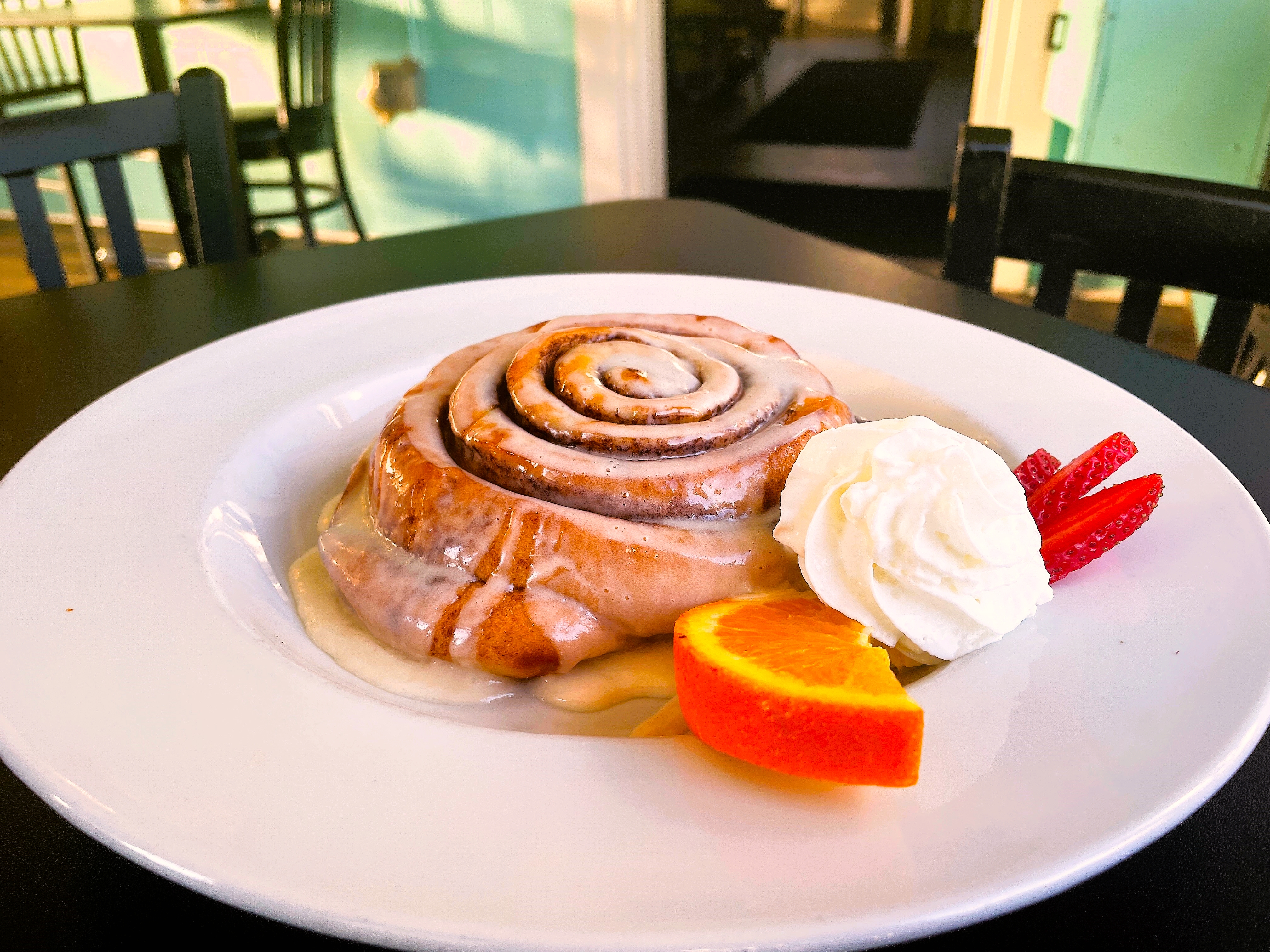 Photo by Anne Braly / The size of the homemade cinnamon roll at Mama’s Boy in Athens, Ga., makes this specialty a shareable treat.

Rise and shine! Even if you choose to sleep in, you have until 2:30 every afternoon to eat like a local for breakfast. Mama’s Boy is a place the college students frequent since it’s close to so many of their apartments. It’s also a haven for anyone wanting cinnamon rolls as big as a dinner plate and French toast as sweet as a Georgia peach. It’s also a place where you can live out a childhood dream and have chocolate cake for breakfast — a big piece of it topped with fruit and whipped cream.

Want something on the savory side?

Enjoy a mouthwatering biscuit stuffed with pulled pork smoked on-site, house-made pimento cheese and an egg. Or try one with fried chicken or sausage, egg and cheese. One might think your mama’s in the kitchen, but it’s only chef Colin Mayes.

Breakfast is served all day, and so is lunch. The pimento cheese burger is a house favorite, Lynch adds. And, she says, when the smoker gets going, the smoke draws people in for a pulled pork sandwich with jicama slaw or pulled pork tacos with beans, jicama slaw and an egg with tangy mustard barbecue sauce.

It’s little wonder that this small eatery along the North Oconee River Greenway has been around for 15 years and now has a larger, second location out on Macon Highway.

Fare warning: On weekends, especially when the Georgia Bulldogs have a game, good luck getting a seat during the height of the breakfast hours. Plan accordingly. 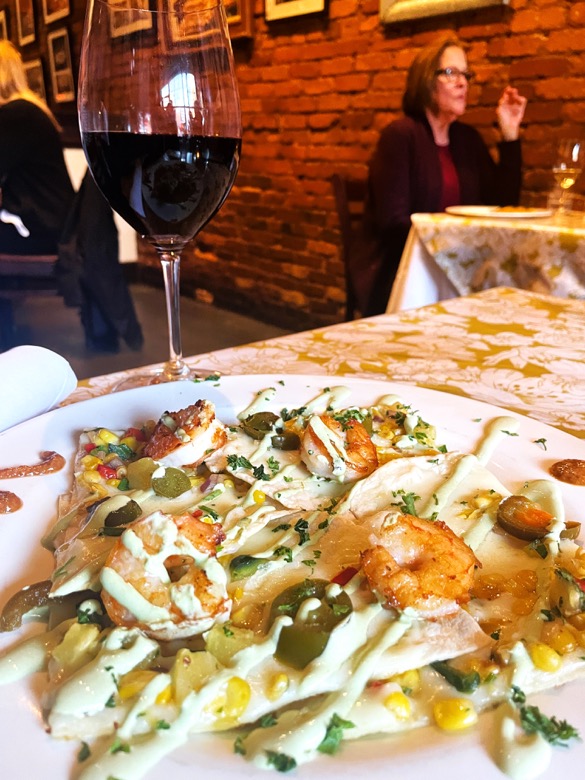 Photo by Anne Braly / The shrimp quesadilla at the Last Resort Grill in Athens, Ga., is prepared with the ingredients piled on top instead of inside the tortilla. It’s one of several appetizers that can easily make a meal.

The original Last Resort opened as a music club in 1966 and was frequented by a long list of performers, including Townes Van Zandt, Doc Watson and Jimmy Buffett. Now, the Last Resort Grill should be your first choice for a creative take on Southwestern cuisine with a nod to the South.

Located in the heart of downtown, it has a menu filled with familiar favorites presented in surprising ways, such as Carolina crab cakes with chipotle remoulade; crispy pork belly with cactus vinaigrette; and a shrimp quesadilla on the deconstructed side with shrimp, charred corn salsa, Monterey Jack cheese and pickled jalapenos piled atop, instead of inside, a large tortilla.

Not a fan of Southwestern fare? How about some flavors straight out of Georgia? Try the fried green tomatoes with Vidalia-bacon dressing or the signature dish, Last Resort’s Praline, a chicken breast stuffed with a medley of cheeses, topped with walnut-honey drizzle and served with green beans and grits.

Among the most-impressive aspects of this restaurant is its extensive wine list. Pick from vintages from around the globe — Italy, Lebanon, Australia, France, Spain and, yes, plenty from California. Enjoy a glass outside in the new wine garden, a pleasant patio space with trees, picnic tables and a full-service bar.

Mimi Maumus opened Home.Made in 2006 as a home-based catering and personal-chef business. In 2013, she moved into a brick-and-mortar location on Baxter Street and now offers a menu of Southern favorites: fried chicken, tomato pie, shrimp and grits, grilled oysters. Plus, she has a signature line of snacks, such as house-made pickles and cheese straws that Garden & Gun magazine praised, writing, “Few chefs have thought more about how to make a great cheese straw than Mimi Maumus.”

Recently, Maumus expanded her culinary empire with the opening of Sidecar in a space adjacent to Home.Made. The bar specializes in craft cocktails, but has a menu that allows the chef a departure from the elevated Southern fare she offers in the restaurant. Try a classic whiskey sour with a plate of Smoked Fish Gyoza — pan-crisped smoked fish and cream cheese dumplings with scallion dipping sauce. Or try a Pear of Gins and Tonic — gin with house-made ginger/pear shrub and tonic — with Brown Butter Pecan Whipped Goat Cheese served with pear chips and local honey. 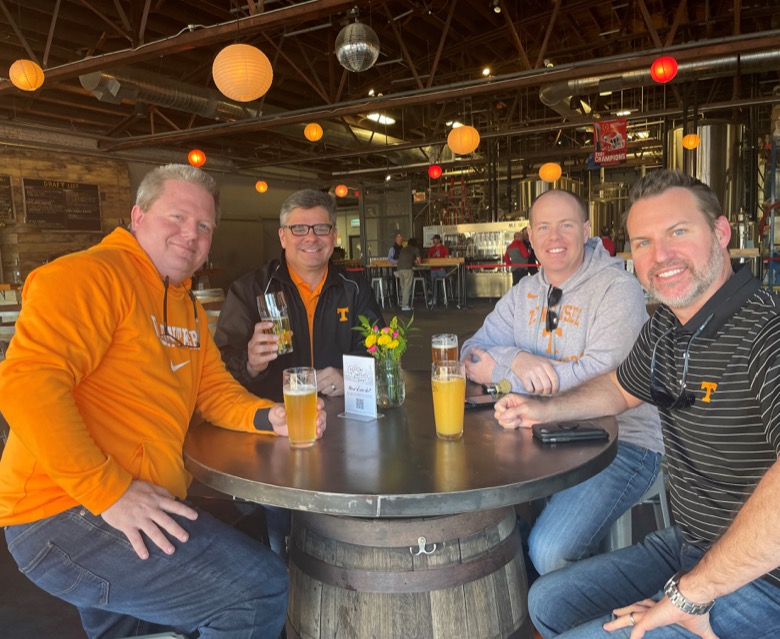 Photo by Anne Braly / Alumni from the University of Tennessee try out the offerings at Creature Comforts Brewery and Taproom in Athens, Ga., before a game. From left are Scott Lee, Rusty Christopher, Justin Cook and Greg Johnston.

The craft-beer craze had a strong foothold in Athens before Creature Comforts opened in 2014. What set it apart from others along the Athens Beer Trail was its focus on flagship brews, which created a strong local following. Seven years into the brewery’s mission to “build an industry-respected craft brewery that helps people navigate the beautiful and complex world of beer,” it has been recognized as one of the fastest-growing breweries in the United States by the Brewers Association, the trade group that represents small and independent American craft brewers.

It all started in Athens, but the company has expanded its offerings into other cities, including Nashville, and is about to open a second brewery and taproom in Los Angeles.

The brewery does not offer food, but you can bring in your own victuals and eat it in the outdoor area, or choose one of the frequent days when Creature Comforts hosts food trucks (the Facebook page keeps the schedule). 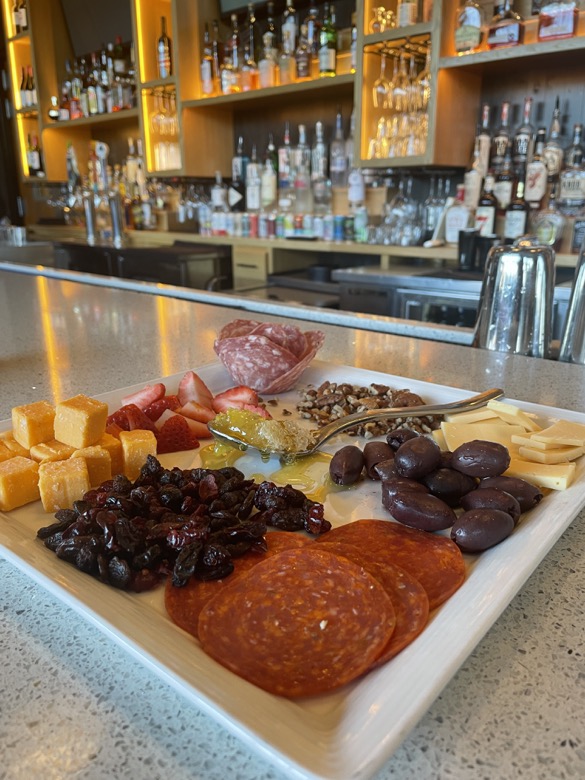 Photo by Anne Braly / Piled with meats and cheeses, charcuterie plates are among the appetizers meant for sharing at Madison Bar & Bistro inside the Hotel Indigo in Athens, Ga.

Hotel Indigo was opened about 13 years ago by a group of five University of Georgia alumni, so naturally, the décor is filled with bits of local flavor, including the menu at its restaurant, Madison Bar & Bistro. Lemon pepper salmon, sausage and peppers, and a selection of mouthwatering burgers, salads and sandwiches are among the dinner choices. Or start your evening off at the bar with a glass of wine, cocktail or Creature Comforts beer and one of several appetizers meant for sharing, such as the charcuterie plate, loaded with meats and cheeses, or a massive order of nachos, loaded with cheeses, beans and jalapenos.

History buffs will appreciate the furniture found around the hotel using reclaimed wood from various sources made by Sons of Sawdust, a local business specializing in creating masterpieces out of old pieces of wood. Of note is a long table in the bar made of wood from the floor of the house of Maj. William Skinner in Augusta, Georgia. Skinner served in the Revolutionary War and welcomed President George Washington into his home for breakfast in 1791, so even though Washington didn’t sleep at Hotel Indigo, you can sit at the table where he walked. 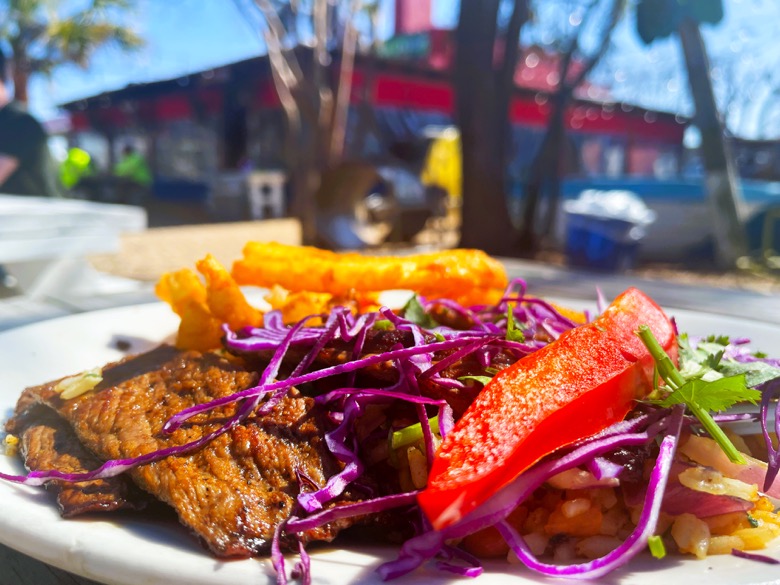 Photo by Anne Braly / Cali n Tito's Tacu-Tacu is a beautiful plate of marinated beef strips with tender beans and rice. Order it with a side of fries, considered some of the best in town.

There are just times when one must sit down and eat a plate of french fries at Cali n Tito’s. They’re just that good — hot, crispy and perfectly seasoned. But if that’s all you order, you’ll be missing out on some great fish tacos, a tacu-tacu plate, Cuban sandwiches, burritos and a host of additional Latin-American creations.

This place is one of those don’t-let-the-outside-fool-you restaurants. You’ll stand in line to order, then take a seat inside, on the plastic-encased patio or at any of the mismatched picnic tables outside in the gravel yard, maybe in the shade of a palm tree. Orders are delivered to your table.

This place exudes the funkiness of any Caribbean bar. Just ignore the busy four-lane road behind you or the big white Sigma Delta Tau sorority house across the street and focus on the food that comes out of this little red shack.

There’s a second location in town at 1245 Cedar Shoals Drive. It serves the same menu but doesn’t have quite the same rustic charm as the Lumpkin Street location near the university. 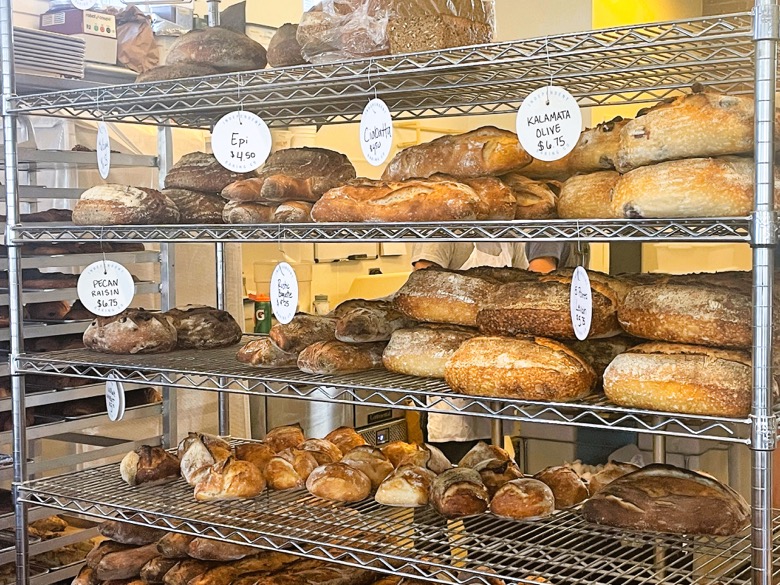 Photo by Anne Braly / The "best bread in Georgia," as deemed by Food & Wine magazine, is baked fresh each morning at Independent Baking Co. in Athens.

It’s hard to resist checking out a bakery deemed by Food & Wine magazine to have the Best Bread in Georgia. That’s something to live up to, but this bakery does it with gusto. It’s in the Five Points community, a retail/residential neighborhood near the university campus. Once you’ve figured out the rather confusing five-way intersection of Lumpkin Street, Milledge Circle and Milledge Avenue, you’ll find the small, unassuming building with its simple “Bakery” sign above the door.

There are no tables, so you’ll need to get your daily bread to go. This bakery should be on your radar when you visit Athens.