ATLANTA (AP) — No one's job is safe for the struggling Atlanta Falcons.

That was the message from coach Arthur Smith as the Falcons (5-8) headed into an off week searching for ways to snap out of a skid that has led to four losses in the last five games.

“We’ll evaluate everything, every job,” Smith said after the latest setback, a 19-16 defeat to the Pittsburgh Steelers. “There’s a lot that needs to be evaluated, talked about and discussed.”

Much of the talk during the bye will undoubtedly center on quarterback Marcus Mariota, who has struggled to spark an offense that isn't blessed with a whole lot of weapons — especially since tight end Kyle Pitts went down with a season-ending knee injury.

Mariota completed just 13 of 24 passes for 167 yards against the Steelers, with one touchdown and a late interception that sealed Pittsburgh's victory. His 72.7 efficiency rating was his third-lowest of the season.

Smith wasn't ready to commit to replacing Mariota with rookie Desmond Ridder, a third-round pick who has yet to take a snap this season.

“We're still working through that,” the coach said Monday. “We'll have some very intense meetings the next couple of days. Obviously, I know where we're at. We understand, too, that there's been some close games lately, but we need to get back over the hump. There will be changes. Anything we decide to do, we'll be as transparent as possible.”

Mariota downplayed the perception that his days as Atlanta's No. 1 quarterback are numbered.

“At the end of the day, they have to make a decision that’s best for the team, and whatever happens, happens," he said. "But I’m not really thinking about that right now.”

The running game continues to produce, even though opposing defenses know they don't have to worry much about the Falcons throwing the ball.

The Falcons must generate more production though the air, which is surely why Smith is considering a quarterback change. Atlanta has gone five straight games without passing for 200 yards. While Mariota has undoubtedly struggled, the Falcons also are hampered by a lack of quality receivers and a conservative, run-oriented game plan.

Drake London. The rookie receiver had the best game of his young career, hauling in six passes for 95 yards. No other Atlanta player managed more than two catches. London totaled more yards receiving against the Steelers than he'd had in the previous four games combined. 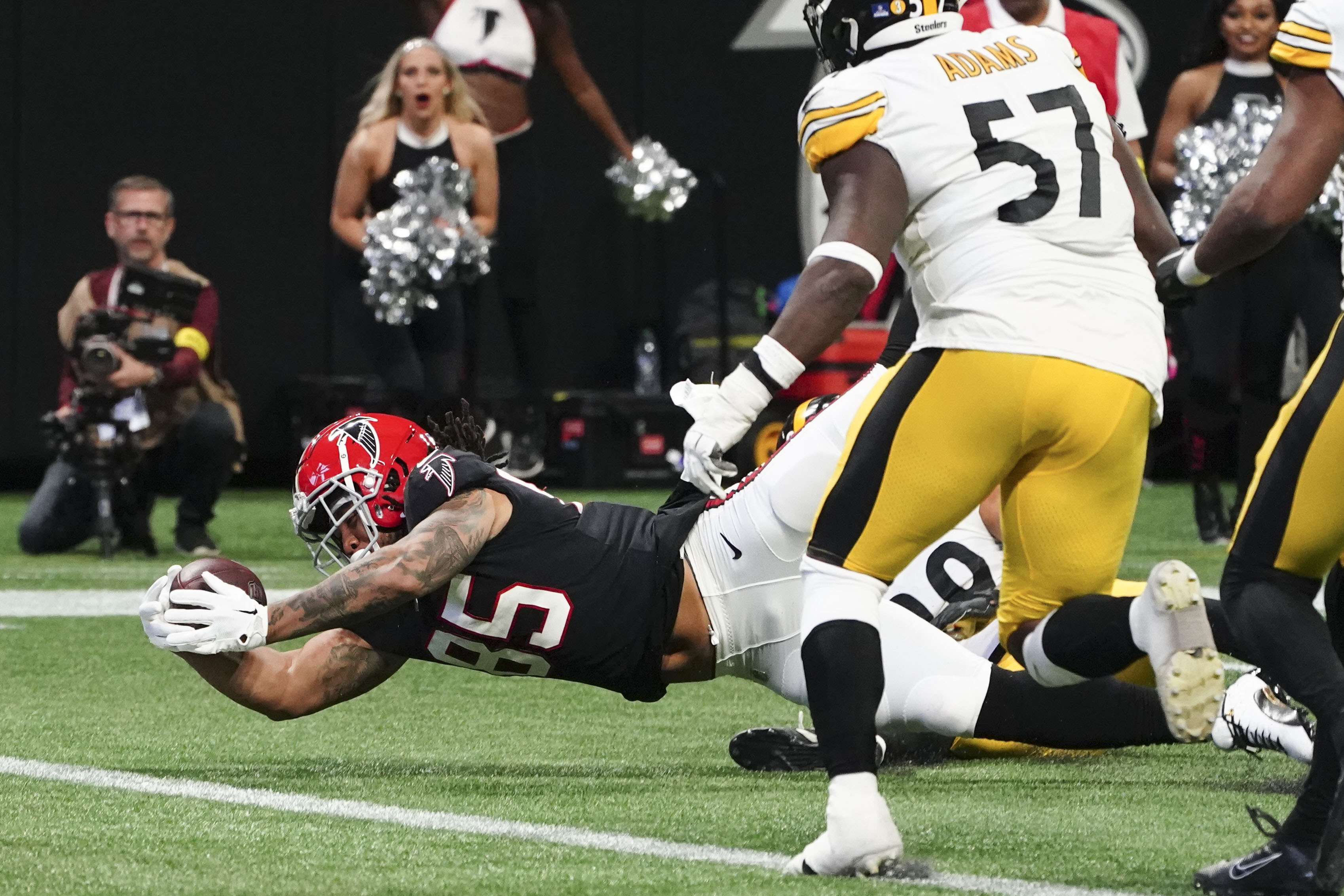 Atlanta Falcons tight end MyCole Pruitt (85) dives into the end zone for a touchdown after a catch against the Pittsburgh Steelers during the second half of an NFL football game, Sunday, Dec. 4, 2022, in Atlanta. (AP Photo/John Bazemore)

Mariota. A few weeks ago, the 2015 No. 2 overall pick by Tennessee was showing signs of reviving his faltering career in Atlanta. Now, he appears on the verge of losing the starting job, just as he did with the Titans. The Falcons are averaging just 17.6 points over the last five games, which has forced Smith to consider giving Ridder a look.

On Monday, at least, Mariota had more important things on his mind than whether he'll remain the starter. His wife went into labor with what will be the couple's first child.

The Falcons came through Sunday's game in good shape. LB Troy Anderson (ankle) was the only announced injury. Smith is hopeful ailing players such as offensive linemen Elijah Wilkinson and Matt Hennessy (both on injured reserve), as well as offensive lineman Chuma Edoga and defensive lineman Jalen Dalton, who were inactive Sunday, will be in the mix to return for a Dec. 18 game at New Orleans.

3 for 10 — The Falcons' success rate on third down, largely because they kept putting themselves in long-yardage predicaments. Not counting two plays that were wiped out by penalties, the Falcons faced an average of 8.5 yards to convert on third down. Not surprisingly, the only ones they made were when they needed just 2, 1 and 1 yards. Six times, they had to get at least 10 yards for a first down. They failed to convert any.

“We need to get more than 20 points,” Smith said. “We need to be a little cleaner, extend drives, get into the red zone.”

The Falcons must decide during the off week if they're really going to shake things up or settle for more measured changes. While Atlanta fans are eager to see if Ridder has the potential to spark the offense and get a head start on 2023, this team still has hopes of improbably making the playoffs in a weak division. Going to a rookie who hasn't played all season could scuttle those prospects, even with a favorable schedule that includes only one remaining opponent (Baltimore) that has a winning record. 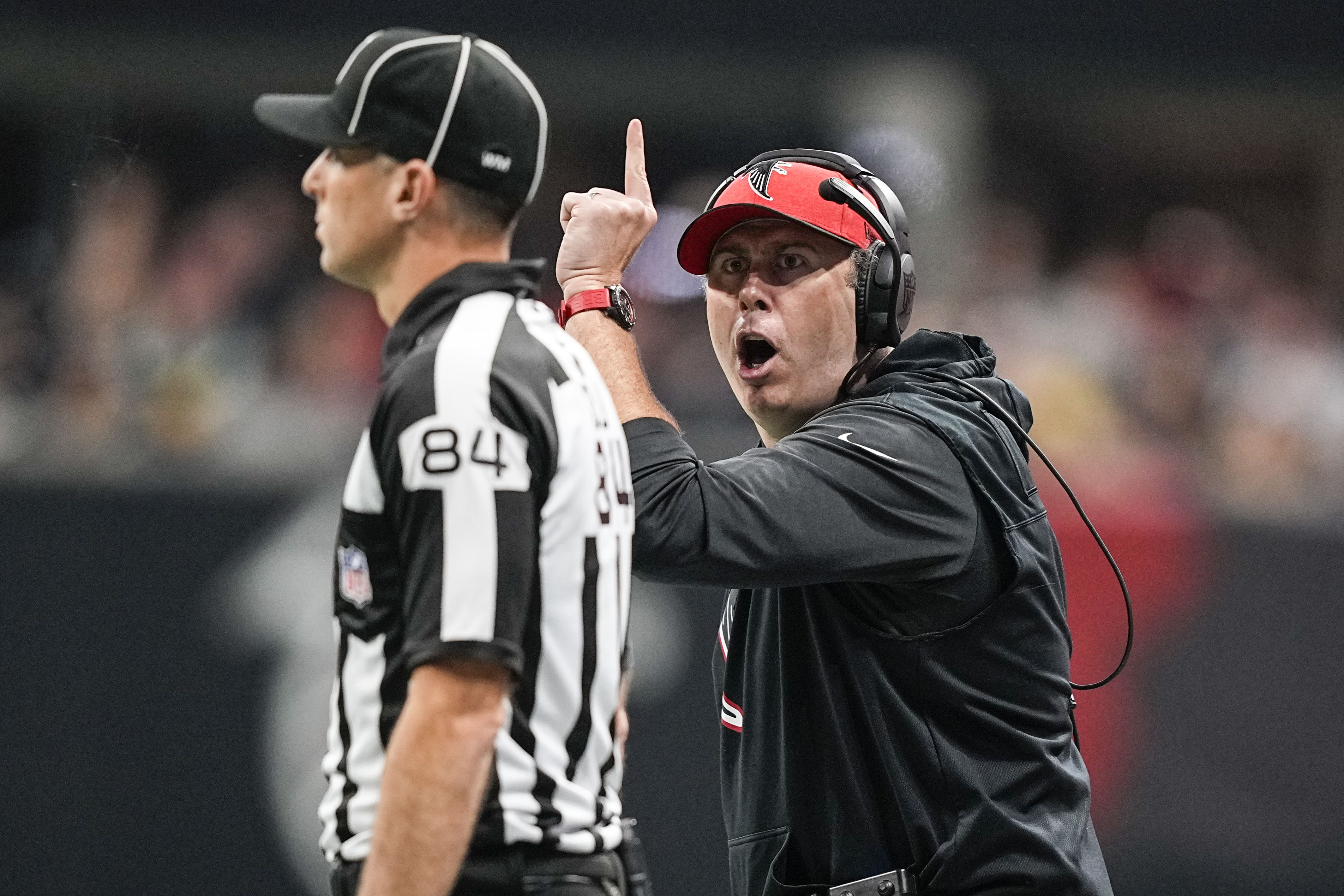 Atlanta Falcons head coach Arthur Smith speaks with line judge Mark Steinkerchner (84) during the second half of an NFL football game between the Atlanta Falcons and the Pittsburgh Steelers, Sunday, Dec. 4, 2022, in Atlanta. (AP Photo/Brynn Anderson)