NASHVILLE, Tenn. (AP) — The Tennessee Titans have to improve across the board if they want to do more than simply win a bad division for a third straight year.

Coach Mike Vrabel made crystal clear after a 35-10 loss in Philadelphia that his Titans are at a crossroads with five games remaining. He went further Monday, saying they have to start playing their best football now that the NFL season has reached December with teams jockeying for playoff position.

It's not an answer that any Tennessee fan wants to hear with the Titans (7-5) matching their number of losses from all of last season when they used an NFL-record 91 different players and had 26 players on injured reserve.

The Titans now have 16 on injured reserve after adding wide receiver Cody Hollister on Monday, a list that includes two other receivers this offense desperately needs. They also signed outside linebacker Tarell Basham.

Being in the AFC South. The Titans at least have a big lead in the AFC's worst division, already having swept the Colts (4-8-1) so they are assured of a home playoff game. That allows them to try and heal up as much as possible before the wild-card weekend.

They still have a pair of games remaining against Jacksonville (4-8) and Houston (1-10), giving Tennessee a chance to reach double-digit wins.

This franchise hasn't won three straight division titles since its start in the original AFL. 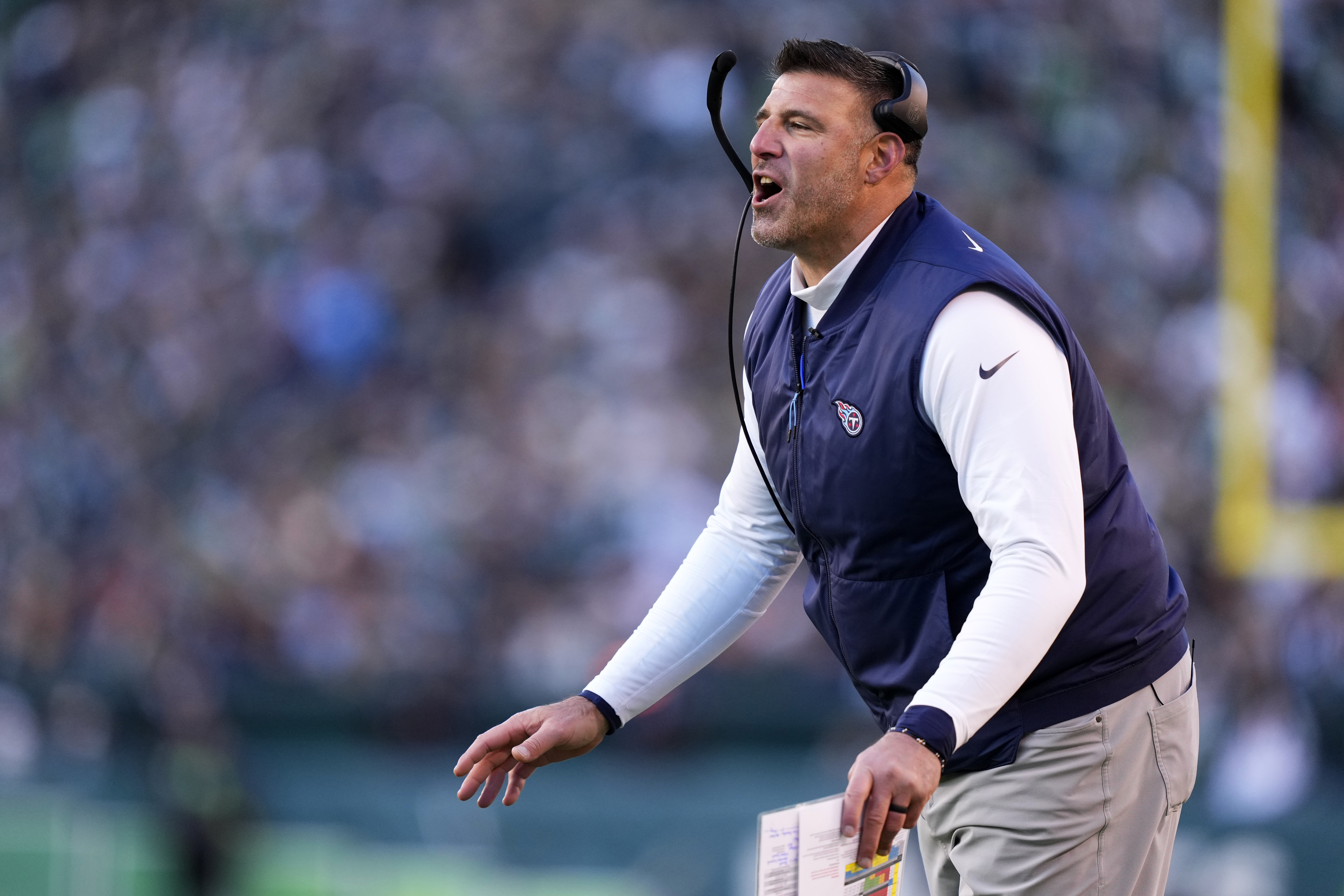 Tennessee Titans' Mike Vrabel shouts to his team during the second half of an NFL football game against the Philadelphia Eagles, Sunday, Dec. 4, 2022, in Philadelphia. (AP Photo/Matt Rourke)

The offense. It's been among the NFL's worst in a few categories much of the season, and Tannehill wound up sacked a season-high six times in Philadelphia. Tannehill also was the Titans' leading rusher, which isn't a good thing with two-time NFL rushing champ Derrick Henry around.

With a passing attack that ranks 30th, averaging a mere 171.4 yards per game, Tannehill and the Titans can't take the pressure off defenses focusing only on stopping Henry. He still ranks third in rushing in the NFL, but has been held to 38 and 30 yards rushing in Tennessee's two-game skid.

Treylon Burks. The rookie showed why he was the 18th pick overall when he went up and caught his first career TD pass with a defender on him.

Unfortunately, a second defender hit him in the face mask, knocking Burks out of the loss to the Eagles on the Titans' second offensive series.

LT Dennis Daley. The Titans traded for him to help their depth, and the season-ending injury to three-time Pro Bowler Taylor Lewan pushed him into the lineup. He struggles to pass block no matter the move used by defenders and needs too much help.

Vrabel said Daley is going to work hard and Le'Raven Clark will get a chance to compete, but the coach added: "That's who we've got on the roster right now.”

Burks, ILB David Long Jr. (hamstring) and CB Kristian Fulton (groin) all left the loss in Philadelphia with injuries. Burks has to clear the concussion protocol, though Vrabel said the rookie looked good when he talked with him Monday. Vrabel said WR Racey McMath, who has been on injured reserve since Aug. 31 with an injured hip, and DB Josh Thompson might have a chance to start practicing this week.

3 — The number of games the Titans have remaining both at home and against teams with losing records. They leave only to visit the Chargers (6-6) and the regular-season finale in Jacksonville. The only team left on the schedule with a winning record is the Dallas Cowboys (9-3), who visit Dec. 29.

Get DL Denico Autry back soon from the knee injury that has sidelined the team sack leader two straight games. His value to the pass rush has been even more obvious in his absence. Also hope McMath is healthy enough to get back on the field with his speed giving Tennessee a chance to stretch opposing defenses. 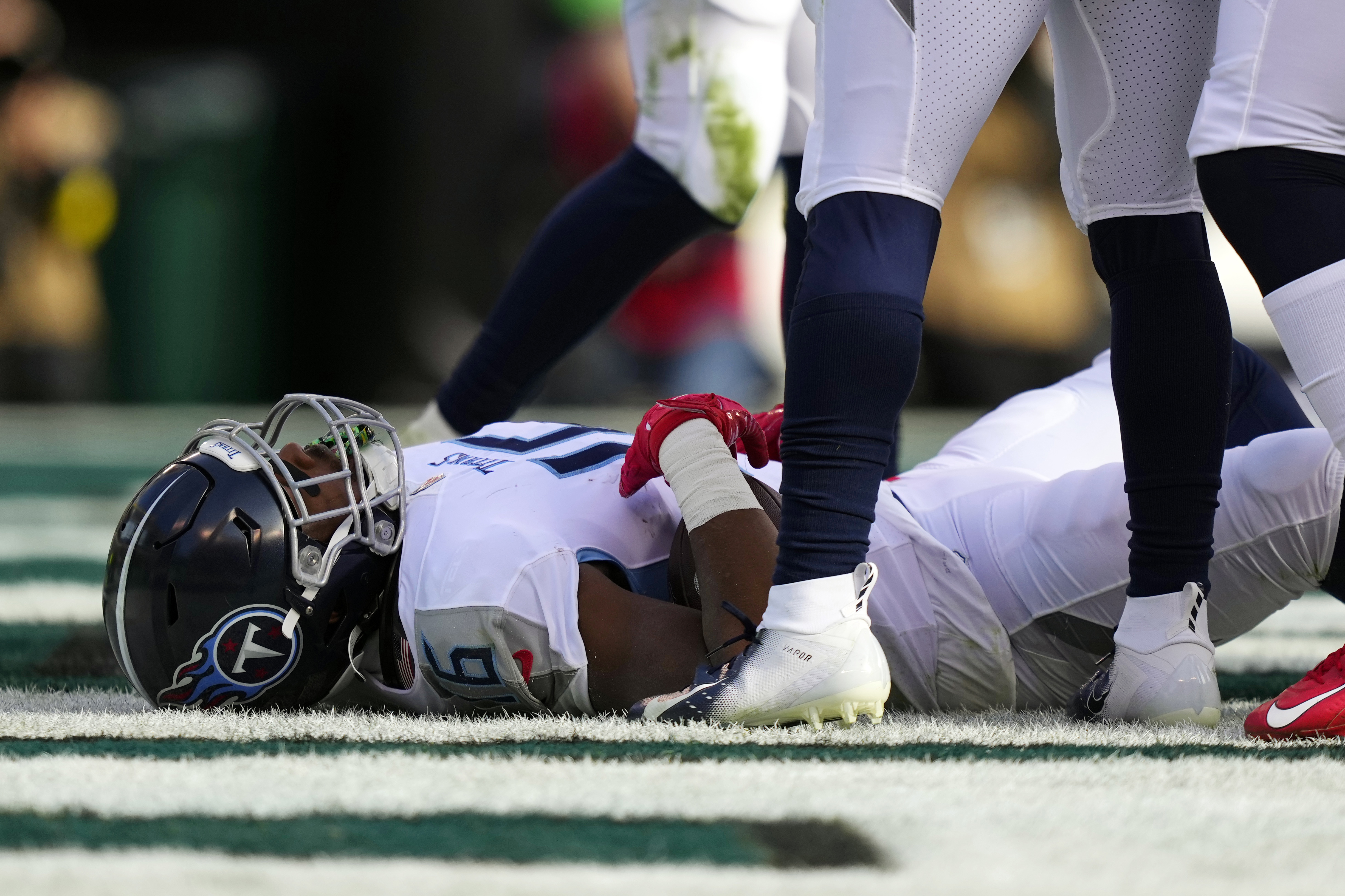 Tennessee Titans' Treylon Burks lies on the ground injured after scoring a touchdown during the first half of an NFL football game against the Philadelphia Eagles, Sunday, Dec. 4, 2022, in Philadelphia. (AP Photo/Matt Slocum)
Advertisement
Advertisement