Of all the thoughtful touches at Bolt Farm Treehouse, one of Tori Bolt's favorites is the guestbook.

"The way people pour their hearts out in here is not normal," the co-owner says, flipping through the pages of handwritten notes detailing special moments shared at the 55-acre nature retreat. "To me, that shows you what this meant to them."

The growing getaway in nearby Whitwell, Tennessee, offers a high-end experience away from it all. Well-appointed treehouses and geodesic domes huddle along a bluff overlooking the area's patchwork of farms and rippling mountains. The artfully selected details within are second only to those outside, where guests can shower, soak in a private hot tub, dine or just relax on their oversized deck as they take in the scene that surrounds them -- "a space to dream, have inspiration and breakthroughs," Tori says, adding, "I hope they leave a little lighter. I hope they leave with greater strength in relationships and just truly feel relaxed."

With a rough blueprint in hand for the property's two treehouses, which are based on the one Seth Bolt built for Tori before their wedding, designing the eight domes was her and Seth's "pandemic project," she says, citing his creativity and pioneering spirit for the retreat's growing footprint of unique accommodations. Now, the year-old retreat is adding five "mirror cabins," the first of their kind in the United States, says Tori. 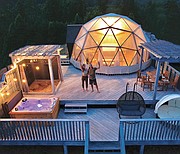 "As a pioneer, he always wants to be the first to try the next thing," she says, listing some 200 such cabins in Europe and one in Mexico as the reflective rooms' only other locations. "This really is a unique experience in the great outdoors."

The Bolts' cluster of cabins is set back in the woods, each offering a sense of privacy while completely immersing the occupants in the forestscape on the other side of the glass facade that stretches along three sides of the 200-square-foot structures. A carefully curated selection of the treehouses' and domes' features and amenities await guests, but "nature is the star of the show," Tori says.

Even when taking advantage of the gleaming grill, pizza oven, private hot tub or hammock that flank each cabin's exterior, the wooded scene is front and center, reflected in the mirrored facade, which acts as a sort of one-way mirror.

"During the day, we did a privacy test, and you cannot see in here," she says, though as an extra assurance, frosted glass was installed on each cabin's bathroom wall before the first guest in early October.

What Tori calls "a hotel room in nature," the minimalistic cabins offer a sense of "the Bolt Farm touch," but carry a much different aesthetic than the property's other guesthouses. Outfitted in the style of the honeymoon retreat Seth built for Tori in 2015, the treehouses and the domes offer a romantic interpretation of luxe living. Old World meets New in the French Country and Victorian finishes, pillowtop mattress and copper soaking tub.

The mirrored cabins, each about the size of a cargo container, are pared-down versions, providing the same creature comforts amid a modern ambiance. "We chose things you can really interact with," Tori says, pointing to touches like a therapeutic coloring book, vintage-style record player, classic games and mounted movie projector. "Just things we love or that our guests have loved."

While designing each new space, the couple lives in one of the units to ensure the best guest experience for those who come after. "We are picky guests," says Tori. "We will obsess--'Let's move that outlet.' 'The light's too harsh, let's get dimmers.'"

Because she does not want to have to do dishes while on vacation, she added four sets in the two-person cabins. The coloring book is a fan-favorite touch carried over from the initial treehouse. The French press and antique coffee grinder tie in with the Bolts' desire to help people disconnect from the everyday and plug into the experience at hand. "Sure, a Keurig is faster, but the grinder and French press intentionally slow you down," she says.

Guests are provided with a video tutorial on how to use the equipment and can opt for additional experiences like making their own pizza with a kit included with the VIP Experience (additional packages available) or by booking with the Bolts' local partners for everything from an onsite massage to an ATV adventure exploring the surrounding woods, which are abutted by 5,000 acres of preserved land.

Despite the cabins' minimal aesthetic, the rooms feel cozy and inviting. Various wood-tone finishes help ground the interior in the surrounding scene, while monochromatic accents brighten and elevate the space without detracting from its immersive environment.

"This is our first time doing an indoor shower," Tori says, explaining that while the interior is highly customized, the prefabricated shell and some of the manufacturer's stipulations made that standard Bolt Farm amenity unfeasible. "They literally come out and vet the property. They have turned people down," she says of the cabins' Estonian creator.

With room to expand the number of cabins on the property, she hopes to work with the manufacturer in the future to customize them even more should they prove successful. Judging from the initial response, they will be. "We saw overwhelming demand, more than we expected," the experienced hotelier says. "I think it's that sense of wonder. People are like, 'Oh, gosh, I've never seen anything like this.'"

In the meantime, the couple is in the process of building four more "honeymoon treehouses" -- in the style of their former Charleston properties featured on Netflix's "The World's Most Amazing Vacation Rentals" -- which Tori expects to come online early next year.

Good to know: Max guest occupancy for the units is two adults, though a small selection of the domes and treehouses are child-friendly and sleep 4-6. Most require a three-night minimum stay, though the mirror cabins can be booked for two-night stays. Pets are not allowed. The property does have Wi-Fi.