What home cook hasn't felt a moment of righteous satisfaction when presenting the turkey platter at Thanksgiving dinner? After all, a golden roasted bird is the centerpiece of this food-centric holiday.

That importance is also why cooking the turkey can be so intimidating, especially for a first-time host. But armed with the right information and prep tools you won't have to wing it.

Roast or fry? Brine or not? Stuffing or dressing? Read on for how-tos and recipes provided by Butterball and tips from your neighbors.

Remove one teaspoon orange peel and one teaspoon lemon peel from fruit. Cut peeled lemon and orange into quarters and set aside.

Drain juice from turkey and pat dry with paper towels.

Place turkey, breast side up, on flat rack in roasting pan that is 2 to 2 1/2 inches deep.

Season cavity with remaining one teaspoon of salt and one teaspoon of pepper. Place peeled orange, lemon quarters, two shallots and rosemary sprigs into cavity. Tie legs together with kitchen string. Turn wings back to hold neck skin in place.

Rub 1/4 cup butter mixture all over turkey. Cut remaining two oranges and one lemon into quarters. Place those and remaining shallots around turkey. Insert oven-safe meat thermometer deep into the lower part of thigh without touching bone.

Brush turkey with melted butter once an hour for first two hours. Then cover turkey loosely with foil after 2 hours to prevent excess browning. 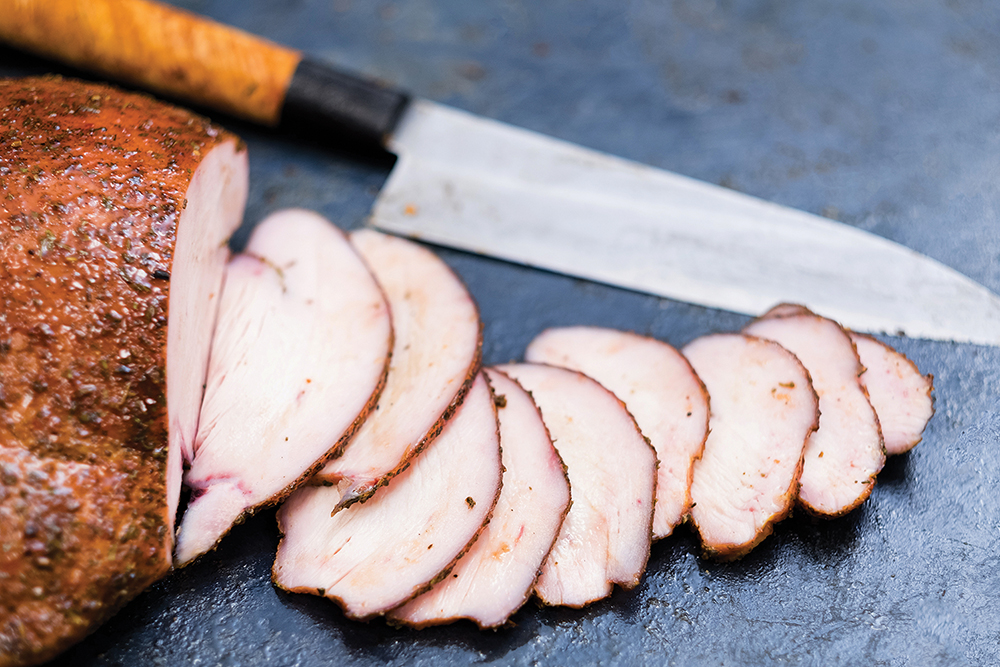 How to choose the right size turkey: How many people are you serving? Figure 1 ½ pounds of turkey per person. So 10 guests equals a 15-pound bird.

How to carve a turkey: Use a sharp, straight-edged knife and carving fork. Let the cooked turkey sit for at least 20 minutes before carving. Begin halfway up the breast and slice down with an even stroke. When the knife reaches the cut above the wing joint, the slice should fall free. Continue to slice breast meat by starting the cut at a higher point each time.

How to thaw: In refrigerator, thaw the turkey breast side up in unopened wrapper on a tray in the fridge at 40 degrees F or below. Allow at least one day of thawing for every four pounds of turkey. Use turkey within four days of thawing.

How to stuff: Prepare stuffing using only cooked ingredients. Use pasteurized products, not raw eggs.

Place prepared stuffing into completely thawed turkey just before roasting. Stuffing the night before can cause food-borne illness. Allow ½ to ¾ cup of stuffing per pound of turkey. Don't pack too tightly.

Stuffing should be 165 degrees F in center when done.

Do not deep-fry a stuffed turkey because the turkey will be done before the stuffing, and there is the possibility the stuffing might ignite in the frying oil.

In an unofficial survey on social media, local cooks shared these tried-and-true tips for juicy turkey.

"We used to roast, then we fried, now we smoke our turkey. If you fry, use LouAna cooking oil and don't forget the Cajun injector. Be liberal with that thing!" -- Christian McDonald

"Roasted, stuffed (no dressing in this house -- it's stuffing all the way) and cooked in an oven roasting bag after slitting the breast skin and placing thin slices of butter under the skin." -- Jeannette Austin Davis

"We use an outdoor oil-free electric turkey fryer. Works great and faster than the oven." -- Valerie Napolis

"Brining the turkey makes for the best roast turkey around. I also add herb butter under the skin." -- Mindy June Kelly

"I roast with butter and herbs under the skin, with onions and citrus stuffed inside." -- Julie Laird

"I roast the turkey in a browning bag with nothing but Wesson Oil rubbed all over it." -- Jane Kaylor

Although the words stuffing and dressing are often used interchangeably, there is a difference: Stuffing is a mixture inserted (stuffed) into the neck and cavity of the turkey before cooking. Dressing is prepared, cooked and served from a separate pan than the bird, like a side dish.

WHY BRINE A BIRD

To brine or not to brine?

Brining is making a salt solution, in which the turkey is submerged for several hours before roasting. The idea is that the salt will help the turkey retain moisture while cooking.

Not all home cooks believe brining is needed, but those who do are divided into two camps: wet or dry brining.

A wet brine is a solution of salt and water, often with aromatics added.

Dry brine means only salting the bird, often with herbs and spices added, then letting the bird sit in the refrigerator for several hours. The premise is that salt draws moisture to the surface of the turkey, which mixes with the salt before being absorbed back into the bird. The turkey is brining in its own juices. 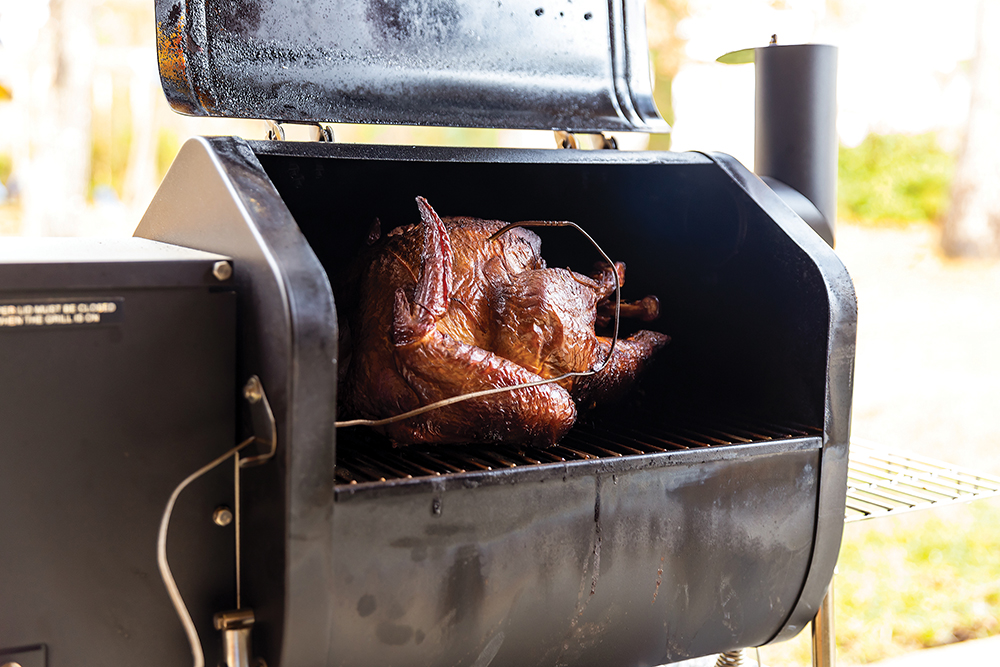 Rick Neufeld has been smoking his Thanksgiving turkeys since 1999. The East Brainerd resident began brining his birds after watching Food Network chef Alton Brown demonstrate brining on an episode of "Good Eats."

Brining the turkey: Combine brine with water and ice in a 5-gallon bucket. Place thawed turkey (with innards removed) breast side down in brine. Make sure the bird is fully immersed and cover.

Refrigerate or let sit in a cool area for eight to 16 hours, turning once halfway through. When time to remove the bird from brine, rinse thoroughly inside and out with cold water. Discard brine.

Neufeld says he brines the night before in an ice-filled 5-gallon bucket.

"I leave it on the back porch all night because it's usually cold enough by then. I rinse it off in the morning," he says.

He next fills the bird's cavity with aromatics such as onions, sliced apples and allspice before starting his Weber Smokey Mountain charcoal/wood smoker.

"I smoke a turkey from three to five hours, depending on its size," he says, using hickory or pecan wood in the smoker.

"I put a temperature gauge in the meat, smoke it at around 220 degrees, and it's ready when the temperature reads 160 to 165 degrees. When you cut into it, you can see a nice smoke ring on it. Smoking gives the turkey a more complex taste through layers of flavor. It never dries out -- that's why it's so nice," Neufeld says. 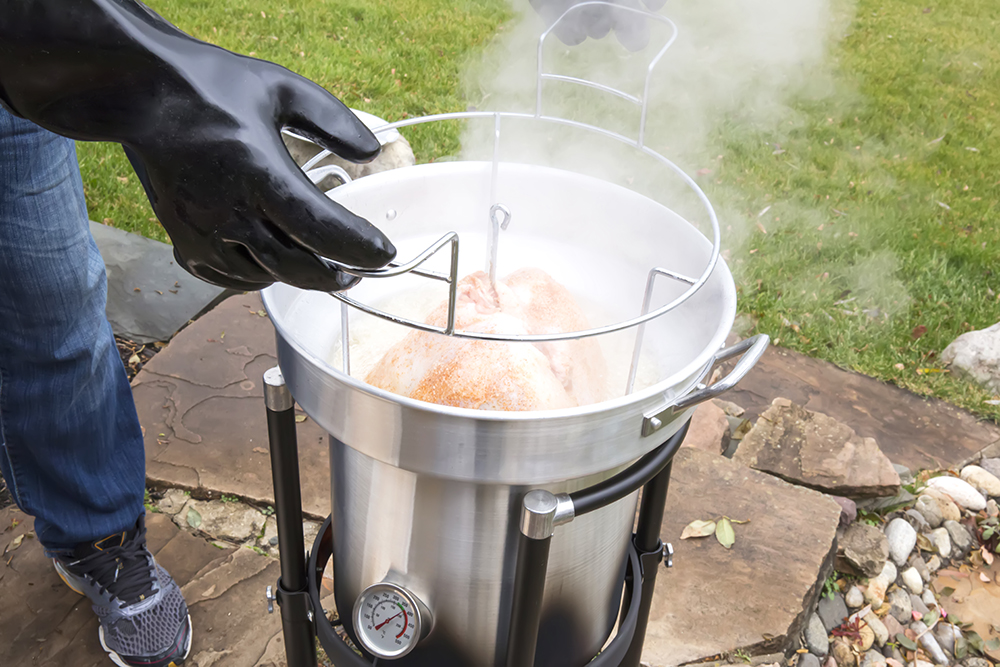 FRYING YOUR BIRD: A TURKEY TREND

The newest -- and most controversial -- trend in turkey technique is deep-frying the bird.

Proponents of frying point out its quick cooking time (just 3 to 4 minutes per pound), that it frees up space in the oven and that crispy skin on the bird is assured.

On the flip side, it's dangerous. The risk of fire or being burned is high, it requires a special fryer and kit and you can't fry a stuffed bird because, again, fire hazard.

The turkey must be thoroughly thawed and patted dry with towels before being lowered slowly into the fryer because any meat still frozen or water on the bird will cause a fiery splatter when it comes in contact with the hot oil.

Ooltewah resident Tommy Rayburn has been frying turkeys for a dozen years. He had a couple of successful years under his belt before having his first cooking flare-up.

"You have to thaw your turkey completely and we thought we had -- it had been thawing about four days -- but apparently there was still ice inside. I lowered the bird very slowly, but when it hit the oil, the oil came bubbling out and over the sides onto the concrete starting a fire."

Because there was a light rain that Thanksgiving, Rayburn had pulled the fryer under the eaves of the house. While he downplays the bubbling overflow as "small enough to put itself out when it hit the concrete," his family members say, "Let's just say there were flames involved. Let's also say those flames got so high they nearly caught the garage on fire."

"The turkey is cold and wet, and water and hot oil do not jive," Rayburn says.

But one bad year out of a dozen is still a good track record using his propane gas fryer.

Rayburn uses peanut oil in his fryer "because it tolerates heat better than other oils."

After attaching a thermometer with a long probe to the side of the fryer, he allows 20 to 25 minutes for the oil to heat.

While it heats, he injects the bird with Cajun spices before setting it on the hook to lower it very slowly into the fryer.

He heats the peanut oil to 400 degrees F before inserting the bird into the fryer.

"You have to keep the oil at 350 when frying. Once you lower in that turkey, you will lose about 100 degrees of heat, so I start it high so I don't lose as much heat. Once it's submerged I start the clock; it takes about an hour and 10 minutes to cook a 16-pound turkey."

Once fried, he removes the bird and puts it in a plastic container to drain before slicing the meat.

Before he began frying, Rayburn says his family roasted their turkeys, but he prefers frying "because the meat tastes better, and the skin is really crisp. And it takes a little over an hour instead of all day to cook the turkey."

YES, YOU CAN AIR FRY

If you own an air fryer, it is possible to air fry a whole turkey breast. Butterball shares six steps for juicy meat with a light fry.

1. When turkey breast is thawed, use kitchen shears to cut out rib cage.

4. Place breast in fryer basket skin side up.

6. Let the breast stand for 10 minutes before carving.

Note: If using a boneless breast, skip step one.

GOOD TO KNOW: Cooked leftover turkey is good for up to three days, or pop it into the freezer for up to six months.