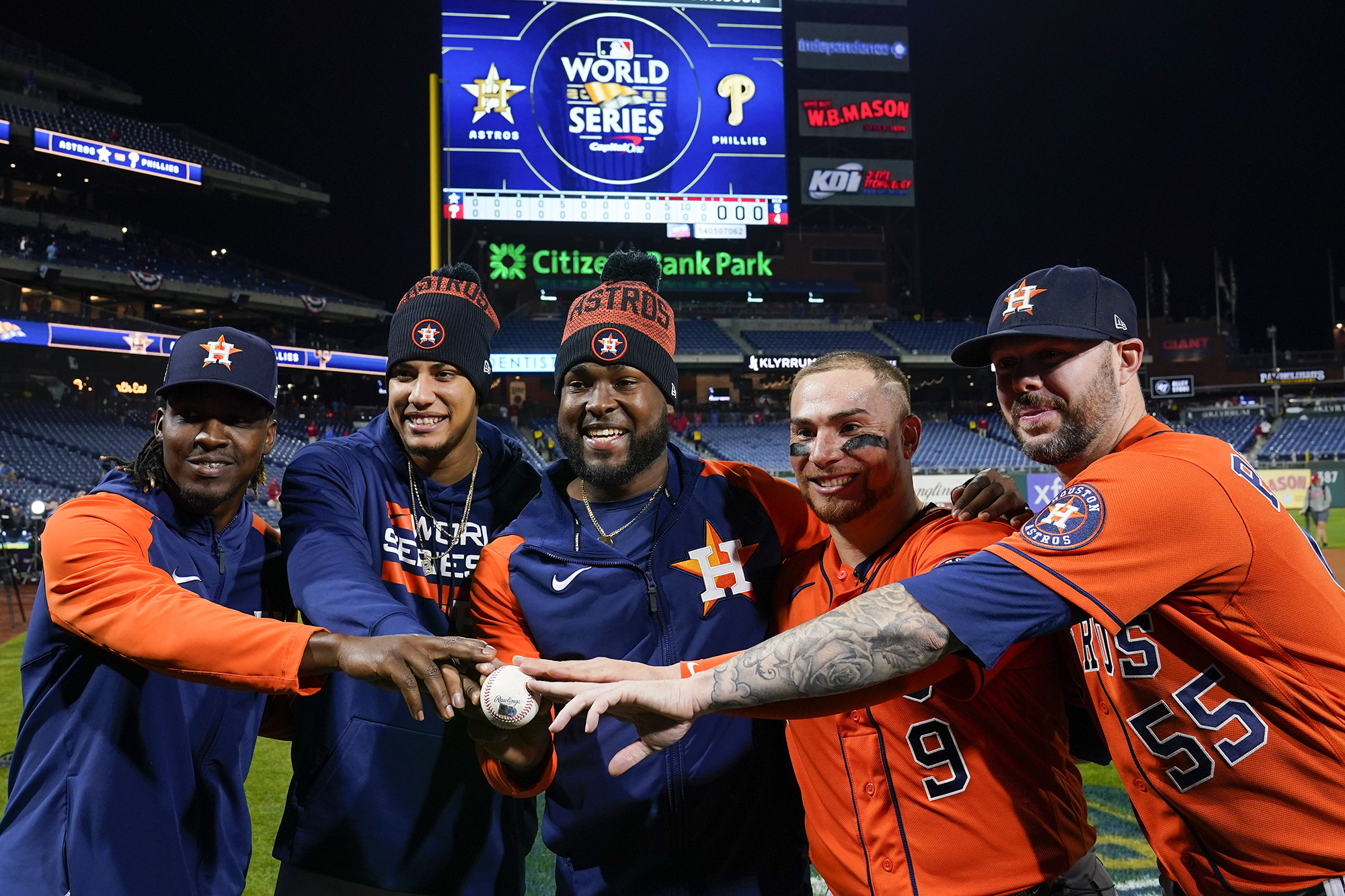 PHILADELPHIA — Hammered by the Philadelphia Phillies the night before, the Houston Astros desperately needed to figure out how to keep Bryce Harper and Co. in the yard Wednesday.

How about a no-hitter — would that do?

Houston starter Cristian Javier and three relievers combined on just the second no-hitter in World Series history, silencing a booming lineup and a boisterous ballpark as the Astros blanked the Phillies 5-0 to even the best-of-seven matchup at two games each.

"You get slapped in the face yesterday, and you want to come back today and make a statement," closer Ryan Pressly said.

The only previous no-hitter in the World Series was a perfect game by Don Larsen of the New York Yankees against the Brooklyn Dodgers in a Game 5 on Oct. 8, 1956.

Javier and three relievers weren't perfect in this Game 4 at Citizens Bank Park, but they were close.

Plus, the Astros had done this before: Javier, the starter in a combined no-hitter against the Yankees in June, was pulled with a no-hitter in progress after six innings and 97 pitches this time.

Bryan Abreu, Rafael Montero and Pressly each followed with a hitless inning for the first combined no-hitter in postseason play. They totaled 14 strikeouts in ensuring this year's MLB title will be decided this weekend back at Minute Maid Park.

Soon after J.T. Realmuto weakly grounded out to end it, the quartet of pitchers posed with catcher Christian Vázquez near the visiting dugout, each putting a hand on the game ball for a photo. It's a picture no one could have envisioned 24 hours earlier, when Philadelphia clubbed five home runs, tying a World Series record in a 7-0 romp in Game 3.

The four pitchers and Vázquez also signed a ball headed to the National Baseball Hall of Fame.

Javier said his parents predicted Tuesday night he was going to throw a no-hitter. The 25-year-old right-hander from the Dominican Republic said his father, Cecilio Javier, arrived in the United States on Tuesday, and this was the first time his dad saw him pitch.

"I just came out holding on to God, trying to be positive, trying to attack the strike zone," he said via translator. "Thanks to God I was able to accomplish that." 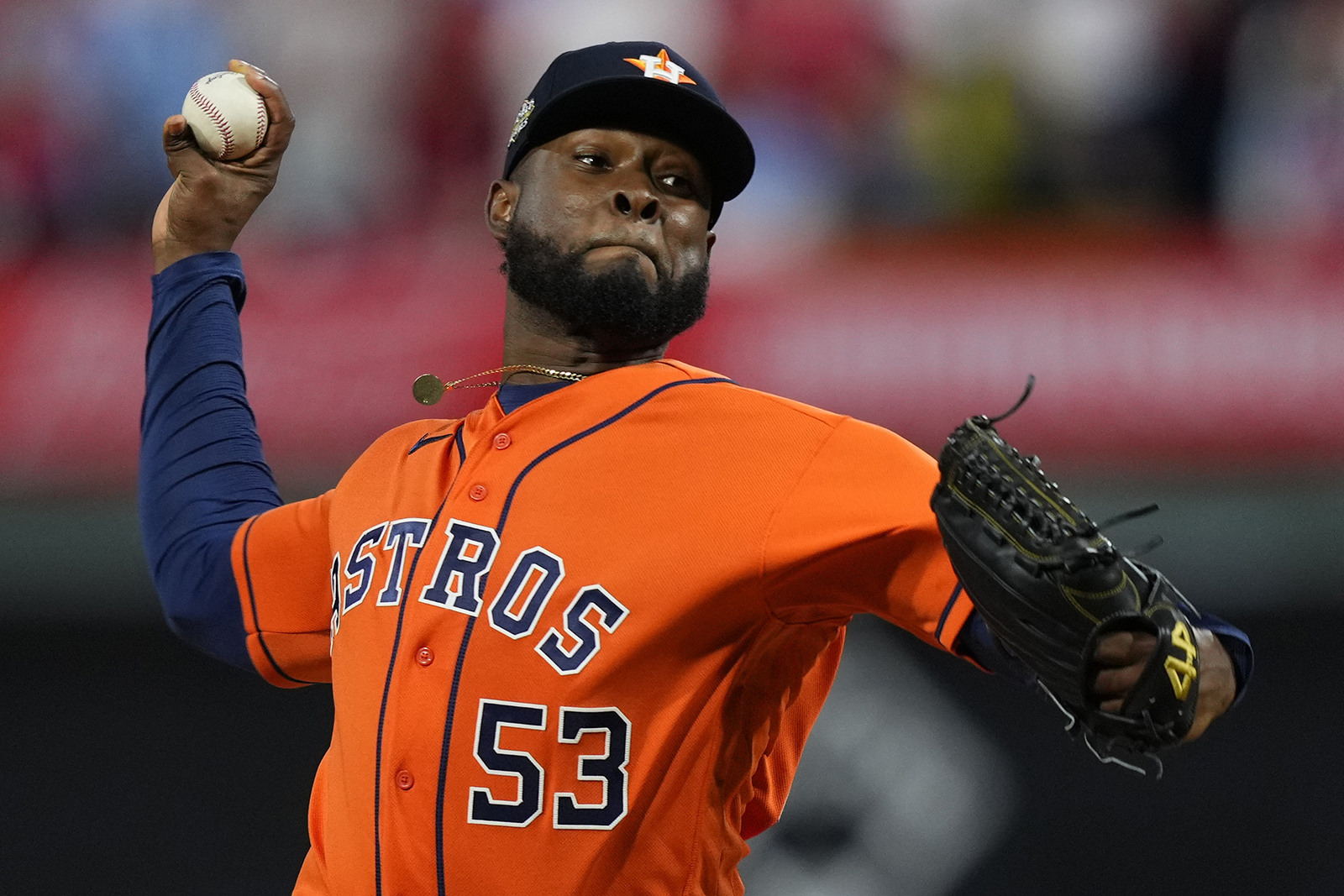 "Oh, yeah, I was on the other end in this ballpark. I mean, that's what's strange about life," Baker said.

With Larsen and the Houston combo, those are the only three no-hitters in the postseason.

The closest the Phillies came to a hit was in the third inning, when Kyle Schwarber grounded a hard foul past first base. On fair balls, nothing.

"It's cool," Schwarber said, sarcastically. "We'll be in the history books, I guess."

They can only hope to pitch as well as Javier.

By the time he exited, the only hit maker on the Philadelphia side who showed up on the scoreboard was rocker Bruce Springsteen, surrounded by the home team’s fans.

And a few innings later, as fans started leaving the stadium, there actually were boos for postseason star Harper and the Phillies. First lady Jill Biden, a noted Phillies fan, was among those in the crowd of 45,693 who had little to shout about.

"For me? I mean, a loss is a loss," Phillies manager Rob Thomson said. "That's the way I kind of look at it."

Alex Bregman delivered the hit Houston desperately needed, a two-run double in a five-run fifth inning, and that was plenty for the Astros.

Completely in charge, Javier struck out nine batters, walked two and hardly allowed any loud contact. He tamed a club that had been 6-0 at home this postseason while hitting 17 home runs.

Opponents hit only .170 against Javier during the regular season, the lowest mark in MLB among pitchers with at least 130 innings.

"When I first met him, he told me he had a disappearing fastball, and I'm like, ‘There is no such thing.’ But I guess so," Baker said.

Javier threw 70 fastballs, and the Phillies barely touched him.

"I think it's the best fastball I've ever seen," Vázquez said.

Very still on the mound, Javier carved his own quiet spot in the middle of the Phillies' storm. Backing off onto the grass, straightening his hat, rubbing the ball, taking deep breaths, he proceeded at his own pace.

Next year, Javier won't be able to work quite this way. Major League Baseball is instituting a pitch clock — 15 seconds to throw with the bases empty, 20 with someone on — and Javier often surpassed those limits on this evening, drawing boos from a crowd eager for action.

This performance by Javier came a year after the Atlanta Braves’ Ian Anderson was taken out after pitching five hitless innings against Houston in the World Series.

"We came back the next day and won," said Thomson, then the bench coach. "So these guys, they’ve got a short memory."

This was the fourth no-hitter of the season, with Los Angeles Angels rookie Reid Detmers responsible for the only individual performance to go with the two combos by the Astros and one by the Mets.

Maybe it was the team's switch to orange tops, or the lucky lunch Baker had at a Philly hoagie spot, but the Astros sure looked different than the previous night, when they got shut out on a feeble five singles.

Blanked for 16 innings, Bregman and the Astros chased Phillies starter Aaron Nola in their big fifth.

Houston's hits resonated far away, too.

Chants of "Let's go, Astros!" erupted when highlights and the score were shown at the Toyota Center as the Houston Rockets hosted the Los Angeles Clippers in an NBA game.

And there figure to be Astros cheers at NRG Stadium in Houston on Thursday night, when the Texans host the Philadelphia Eagles, the NFL's only unbeaten team, in a matchup that will be played at the same time as Game 5.

It was quiet in Philly, though, as fans who came wanting to see a win were reduced to merely hoping for a hit.

Even social media struck out where the Phillies were concerned.

Wawa encouraged Philadelphia fans hungry for a Game 4 win to dig in for a bite of their sandwiches during the game. One problem: The popular Pennsylvania-based convenience store chain tweeted of the Phillies an hour before first pitch, "Each time they get a hit, take a bite of your hoagie!"

Twitter fans had a field day at Wawa's expense.

Famished fans tweeted photos of skeletons next to untouched sandwiches. One snapped a photo of an unwrapped hoagie resting on a pants leg. Others cracked they died of starvation. Some asked what they should do with their stale hoagies.