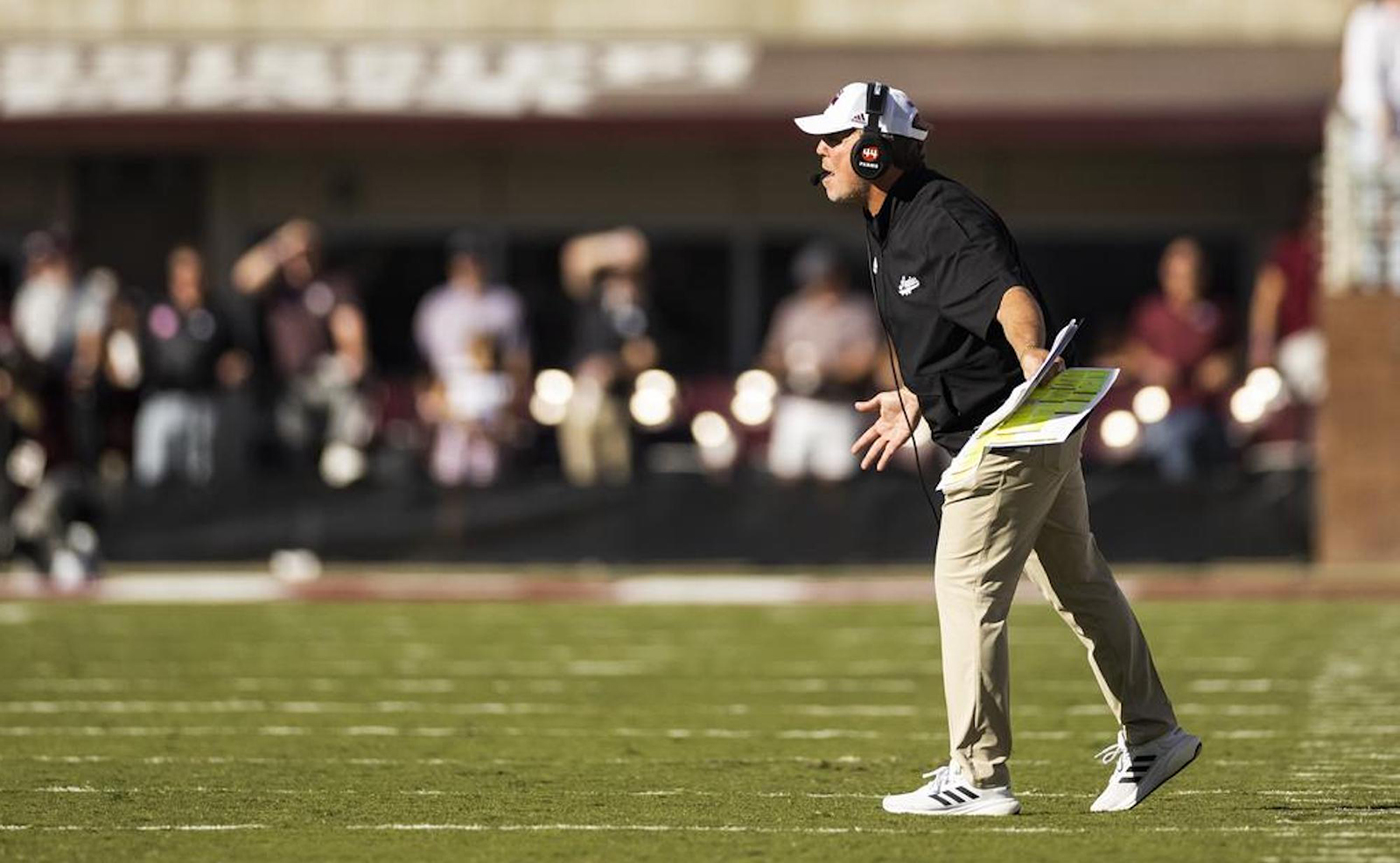 Texas A&M photo by Craig Biscare / Texas A&M football coach Jimbo Fisher began this season with a team ranked sixth in the country, but his Aggies are 3-5 heading into this weekend’s game against visiting Florida.

There are two gargantuan games with division implications Saturday in Southeastern Conference football, and neither involve Jimbo Fisher.

The Georgia-Tennessee contest in Athens is the biggest SEC East matchup of this season without question. The Alabama-LSU showdown in Baton Rouge is impactful as well, but a Crimson Tide victory could result in their trip to Ole Miss next week being the biggest SEC West pairing of the year.

Wouldn’t it be wonderful, even for a millisecond, to enjoy Georgia-Tennessee and Alabama-LSU from a conference excitement standpoint instead of a College Football Playoff angle?

Of course, Fisher isn’t enjoying much of anything these days, as his Texas A&M Aggies have plummeted from the nation’s No. 6 preseason team to a 3-5 mess that has dropped three consecutive one-possession contests. The Aggies have been bowl-eligible each of their first 10 seasons in the SEC and need three wins in their final four games to extend that streak.

“You have some guys here who are very proud of what they do and how they do it,” Fisher said Wednesday. “You get to play 12 games a year, and every time they put something on film, it’s for their future. They’re being evaluated on the future of their business or their business venture of trying to be a pro player.

During Josh Heupel’s second season as Oklahoma’s starting quarterback in 2000, the Sooners jumped from a 7-5 record to a 13-0 national championship squad.

Now in his second year as Tennessee’s coach, Heupel has followed a 7-6 debut season with an 8-0 start and a No. 1 ranking in the College Football Playoff standings.

“There are parallels to that when you’re talking about a program that was fragmented in some ways when we first got here similar to when I first got there,” Heupel said. “There was a clear vision and everybody jumping in the boat together and pulling as hard as they can and competing. This group continues to grow and continues to get better.”

Auburn travels to Mississippi State on Saturday night in the debut of Carnell “Cadillac” Williams as interim coach of the Tigers.

Williams replaces Bryan Harsin, who was fired Monday with a 9-12 record.

“It’s been a bittersweet 48 hours,” Williams said. “There are coaches and staff who lost their jobs on Monday, so it’s been tough. Lord knows I’m appreciative of Coach Harsin and what he gave to Auburn and our team the last two years. I’m truly thankful of the opportunity he gave me to be a part of this staff, and I’m just honored for this opportunity as someone who bleeds orange and blue.

“This school has given me everything.”

Harsin was the first Auburn coach to spend at least one full season on the Plains and have a losing overall record since Earl Brown from 1948-50. One SEC coach who has been mentioned as a potential candidate for the vacancy is Lane Kiffin, whose Ole Miss Rebels are 8-1 heading into their open date.

“We don’t really comment on those things,” Kiffin said. “They happen every year, and all they are is a product of players performing well and assistant coaches. We’re extremely happy here, and we’ve got something really special going. We have great support here from the administration.”

With a nonconference schedule containing Cincinnati, Brigham Young and this week’s hosting of 23rd-ranked Liberty, the Arkansas Razorbacks are hardly facing a bunch of cupcakes this season. Their easiest game was expected to transpire against Missouri State on Sept. 17, but the Hogs trailed 24-17 entering the fourth quarter before rallying for a 38-27 triumph.

That has left Arkansas second- and third-teamers relegated to the sideline.

“We’ve been here 31 games, and we’ve total subbed twice,” Arkansas third-year coach Sam Pittman said. “A lot of that has continued to do with building our program, and a lot of it has to do with who we’ve been playing. This is our third nonconference team that’s been ranked this season in the top 25, so that makes it difficult.

“It’s about morale at practice, too, if you don’t feel like you’re ever going to get in a game as a backup. It’s hard, and I get it, because only two of 31 is what we’ve done wholesale-wise.”

Kentucky at Missouri: Doesn’t it seem like these two teams along with South Carolina are in a constant spin cycle in the middle of the SEC East? Tigers 23, Wildcats 20.

Florida at Texas A&M: These two programs in talent-rich states would love to be in the middle of the SEC pack given their matching 1-4 league records. Aggies 26, Gators 24.

UTC at The Citadel: This is UTC’s first trip to Charleston since March 2021, which still seems strange. Mocs 34, Bulldogs 17.

Tennessee at Georgia: Given Georgia’s No. 3 CFP ranking, is this a last-stand situation for the Bulldogs? Bulldogs 37, Volunteers 34.

Alabama at LSU: The Crimson Tide have allowed an average of 9.4 points in their past five trips to Baton Rouge. Tide 30, Tigers 23.

South Carolina at Vanderbilt: At 13 games, the Gamecocks have the longest winning streak over the Commodores of any SEC East team. Gamecocks 17, Commodores 13.