PHILADELPHIA — Justin Verlander beamed as if he had just been called up for the first time, and the Houston Astros feted the 39-year-old with 244 MLB wins like a baby-faced rookie.

"They put me in the cart and rolled me in the shower and just doused me with all sorts of stuff," he said. "And it was one of the best feelings in my career."

After 16 years of trying, Verlander finally gritted out his elusive first World Series win on the mound.

A two-time Cy Young Award winner who is expected to soon receive the American League honor for a third time, he overcame an early jolt, rookie Jeremy Peña hit a go-ahead homer and drove in two runs, and the Astros beat the Philadelphia Phillies 3-2 Thursday night to head home with a 3-2 lead in the best-of-seven matchup.

"I can say I got one," Verlander proudly proclaimed.

Buoyed by defensive gems from Trey Mancini in the eighth inning and Chas McCormick in the ninth, the Astros moved to the brink of the franchise's second championship — the other was the 2017 title that was later tainted by the scandal. They can close out the Phillies on Saturday night at Minute Maid Park.

"There's going to be a lot of energy in our park," said Houston's 73-year-old Dusty Baker, one win from his first title in 25 seasons as an MLB manager.

Philadelphia, wearing powder blue uniforms in the Fall Classic for first time since 1983, lost consecutive games for the first time this postseason.

Of previous World Series tied 2-2, the Game 5 victor has gone on to win it all 31 of 47 times. Three years ago, the Astros lost the sixth and seventh games at home to the Washington Nationals.

"I think it matters that we've already won there this series," the Phillies' Rhys Hoskins said. "Should give us a little more confidence."

Verlander is one of just five Astros remaining from the team caught using video to steal signs in 2017. He had been 0-6 with an unseemly 6.07 ERA in eight World Series starts dating to his rookie season with the Detroit Tigers in 2006, a blotch in a career that will likely lead to his induction into the National Baseball Hall of Fame.

Pitching with an extra day of rest for his arm and stubble on his face, the veteran right-hander gave up just the one run and four hits over five innings with four walks and six strikeouts. He lowered his World Series ERA to 5.63, a celebratory cap on a season in which he returned from Tommy John surgery and returned to his former status as the AL's best starter.

Houston went ahead just four pitches in against Noah Syndergaard on Peña's run-scoring single. Then Kyle Schwarber hit his fifth postseason homer leading off the bottom half, harkening to the five-run lead Verlander wasted in Houston's 6-5 loss in 10 innings in the opener last week.

"It just sucks because of the moment and obviously all the questions and weight," Verlander said. "But you have to rely on the hundreds of starts and the thousands of pitches I've thrown before and just kind of say, 'OK, I've given up leadoff home runs before. Let me bear down.'"

Philadelphia loaded the bases in the second on Jean Segura's single and a pair of walks. After a visit from pitching coach Bill Murphy, Verlander wiggled out of trouble by striking out Hoskins on a slider.

"It was kind of a tricky thing because my first start, my slider and curveball was what I got hurt on most," Verlander said. "Once we started leaning on them a little bit, it was almost like testing the water, sticking your foot in the pool and seeing how cold it is."

Verlander threw exclusively fastballs in 17 pitches to Bryce Harper, who doubled with two outs in the fifth. Baker left Verlander in to face Nick Castellanos.

"He's been one of the best of getting out of trouble and, to me, that was his game," Baker said. "Who can you bring in that's better than the guy that's out there?"

Castellanos, whose single off a slider started Verlander's Game 1 downfall, followed with an epic 10-pitch at-bat. After trying two fastballs, two curveballs and his only changeup of the night, Verlander threw his fifth slider of the plate appearance and retired Castellanos on a flyout to short left, pumping a fist twice in excitement.

"It's a game of centimeters," Castellanos said. "If I'm on top of that ball a little bit more, we're in a different situation."

Peña had three hits: an RBI single through a drawn-in infield in the first after Jose Altuve's leadoff double, a homer in the fourth on a hanging curveball (his fourth shot of the posteason) for a 2-1 lead, and an eighth-inning single that set up Yordan Alvarez's run-scoring groundout. The shortstop also made a leaping catch to foil Castellanos in the third.

After Segura's one-out RBI single off Rafael Montero in the eighth, Ryan Pressly escaped a first-and-third jam by striking out Brandon Marsh and Schwarber on a nearly 100 mph one-hopper that was snagged over first base by Mancini.

Mancini, the backup first baseman, pinch hit in the top half after 2021 Gold Glove winner Yuli Gurriel hurt his right knee in a collision during a rundown. Playing defense for the first time since the regular-season finale, Mancini fell into foul territory and reached back with his left foot to touch the bag.

McCormick, who grew up a Phillies fan in the city's suburbs, helped Pressly finish a five-out save. The center fielder ran 91 feet to made a leaping backhand catch against the chain-link fence in front of the right-center scoreboard on J.T. Realmuto's fly ball for the second out of the ninth.

"I was going to run through a wall and catch it no matter what," McCormick said.

After Harper was hit by a pitch, Castellanos bounced to shortstop, ending a 3-hour, 57-minute thriller.

"Zero complacency," Verlander said. "We've been in this situation before. You can see how quickly momentum can change in this game."

This was the third game in November, marking the first time a majority of the World Series was played in the 11th month of the year, and it's not over yet.

Houston left-hander Framber Valdez is set to start Saturday, when the Phillies will counter with right-hander Zack Wheeler. Valdez allowed one run, four hits and three walks over 6 1/3 innings in Game 2, when Wheeler gave up five runs (four earned) and three walks over five innings, including Alex Bregman's two-run homer. 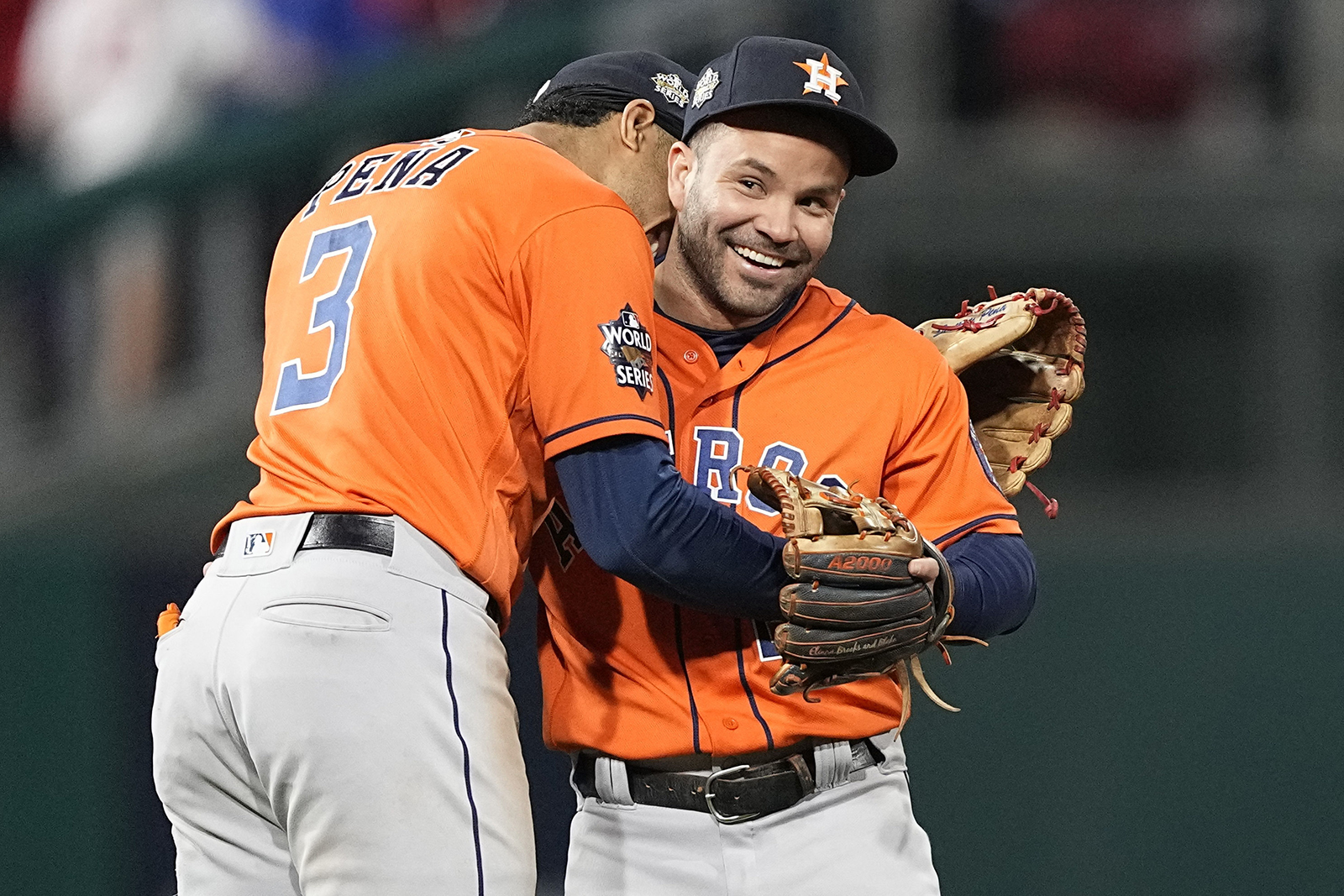 AP photo by David J. Phillip / Houston Astros second baseman Jose Altuve, right, and shortstop Jeremy Pena celebrate Thursday's 3-2 win against the Philadelphia Phillies in Game 5 of the World Series. The Astros hold a 3-2 lead in the best-of-seven series as it heads back to Houston for Game 6 on Saturday night.
Advertisement
Advertisement