The expanded world of the college football postseason can result in teams having a better chance at the national championship than their own conference championship.

Such as this year's Tennessee Volunteers.

Saturday's 27-13 setback against Georgia inside Sanford Stadium has left the Vols 8-1 overall and 4-1 in Southeastern Conference play with games remaining against Missouri, South Carolina and Vanderbilt. The Bulldogs are 9-0 and 6-0 within the league, needing only a split against Mississippi State and Kentucky the next two weeks to secure a fifth SEC East title in the last six seasons.

The likelihood of Georgia losing to both MSU and Kentucky is minuscule, thus making Tennessee the longest of long shots to be in Atlanta on December's first Saturday, but the Vols are very much in the hunt for one of the four College Football Playoff spots. The SEC comprised half the playoff field after the 2017 season and after last season as well.

"There is a whole month of football," Vols coach Josh Heupel said Monday in his weekly news conference. "There is a lot of ball left to be played by everybody in the country. Up until this point, we've done a lot of things right, obviously, and in this last ball game, credit to Georgia.

"There is nothing that we can control other than who we are and how we approach it and how we go play and compete. At the end of the day, it's about finding a way to be the best team on the field for 60 minutes. That's all we're concerned about."

Tennessee was No. 1 in last week's CFP rankings and expects to be somewhere among the top five when the latest order is revealed Tuesday night.

"The biggest message is we can't look forward," defensive lineman LaTrell Bumphus said. "With social media and stuff, it's hard not to see those things, but it's very important that we focus on this week. Without this week, we can't reach those goals, so we've got to go back to work and get back on track."

Said quarterback Hendon Hooker: "It's huge that we come out and get back to how we play, and that's real fast and having fun out there." 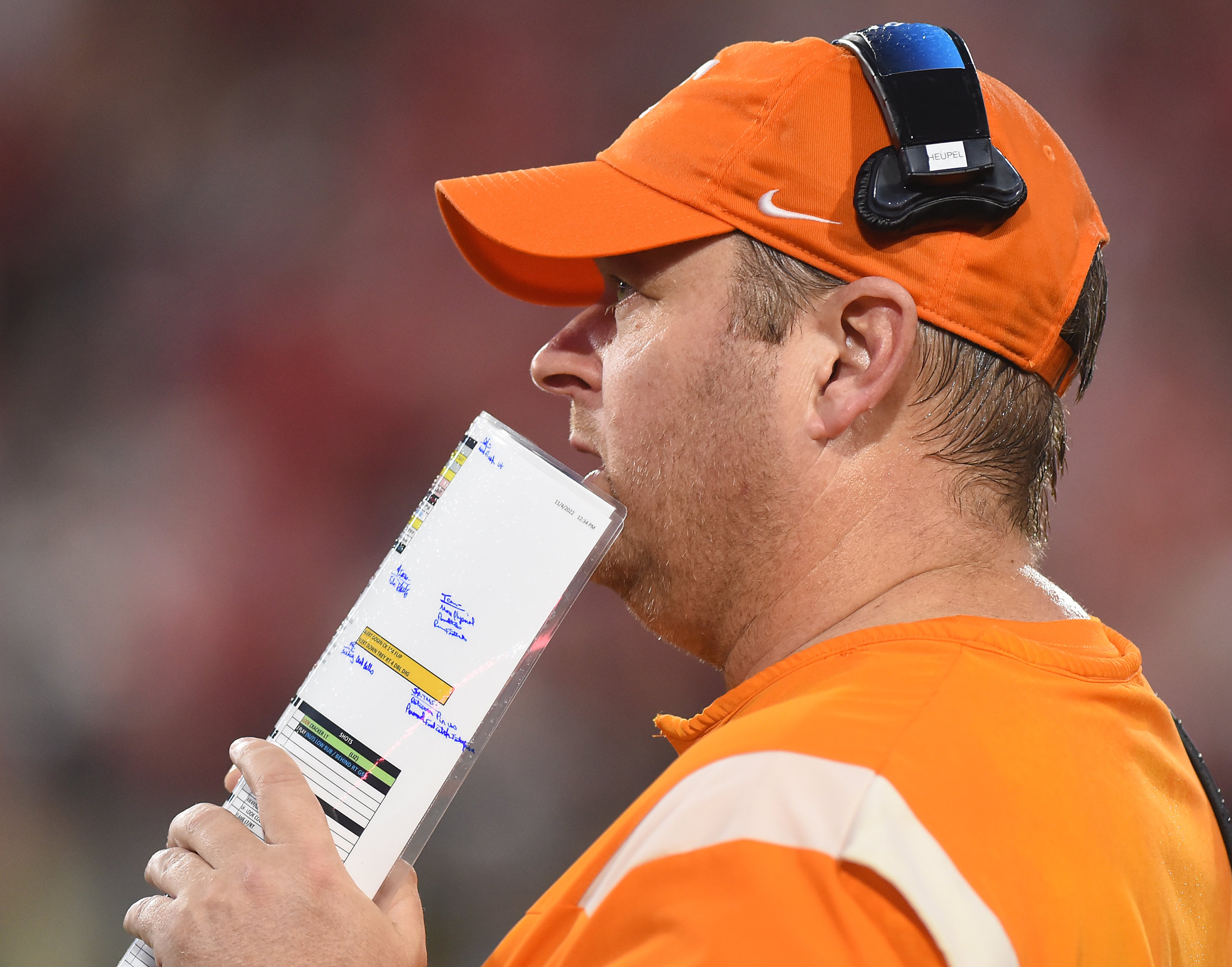 Staff photo by Matt Hamilton / Tennessee Josh Heupel watches the action from the sidelines at Sanford Stadium in Athens, Ga. on Saturday, November 5, 2022.

Missouri is 4-5 overall and 2-4 in conference games, having lost at home to Kentucky 21-17 this past weekend. It certainly can be argued that Tennessee's up-tempo attack under Heupel took hold in last season's matchup between the two, as the Vols bounced back from a 38-14 loss at Florida with a 62-24 thrashing of the Tigers in Columbia.

"When you look at them statistically on the defensive side of the ball, they've been really good against the run," Heupel said. "They've played tight pass coverage, too. They have played at a really high level, and they make you earn it. Offensively, they have some weapons on the outside who are explosive and can create big plays. We've got to do a great job of handling the line of scrimmage and applying a lot of pressure to the quarterback, too."

Said Bumpus: "They'll come in with a chip on their shoulder. We know we're going to get their best and that we can't overlook them for any reason at all."

This will mark the earliest home finale for Tennessee since 1927.

Heupel said the first practice of the season coming off a loss was a good one.

"The energy in the building was good," he said. "Were guys disappointed after the game? Yeah. If they weren't, then we would have real issues. Players had an opportunity to go into their position meetings and just see the landscape from the coaches' perspective.

"They watched how the game unfolded and saw things that we did that can control a game and make it play out differently. As a competitor, you're only as good as the next one, and that's true after a win or a loss."

Tennessee has won eight straight games at Neyland Stadium dating back to last season, the longest such streak since a nine-game run in 2006-08. ... The Vols are still No. 1 nationally in total offense (523.7) but have dropped to No. 2 in scoring offense (45.3) ... Missouri and Tennessee have split their 10 meetings since the Tigers joined the SEC in 2012, but the Vols have won the past two by a combined score of 97-36. ... Tennessee's game next week at South Carolina will either be on ESPN at 7 or on the SEC Network at 7:30. ... Hooker when asked about getting sacked six times in Athens: "Yeah, I'm sore. It's Monday."