Alan Outlaw began his career with Home Depot and worked for nearly a decade with the giant hardware retailer managing stores in Chattanooga.

But at age 31, Outlaw decided to trade his 80-hour workweeks at Home Depot and venture out with a friend to do some construction and remodeling. Unfortunately for Outlaw, his building venture was launched just as the housing market soured in the 2008-2009 recession, and Outlaw later injured himself at his home, temporarily disabling him from working and his regular runs.

As a long-time runner, Outlaw had made friends with folks at Fast Break Athletics getting the right footwear and gear for his runs. When Outlaw was injured, Joey Howe, who has been a runner and worked at the store since he was 16 years old, visited Outlaw at home and asked if he wanted help the store out with the business while he was recovering. Outlaw worked at the store for nearly a year and a half before deciding to buy the business nearly a decade ago.

"The values that founder Dick Dillard brought to the store every day in his tenure as the owner are still present today at Fast Break Athletics, and that has been a huge component of its long-running success," Outlaw said during a recent interview at Fast Break's current location on Hamilton Avenue in North Chattanooga. "We wouldn't have made it nearly half a century without the continuous support from both our long-time and newer customers in the Chattanooga community."

Fast Break Athletics, originally known as Athletic Attic, was founded in 1977 by Dillard and other Chattanooga-based partners. In 2013, Outlaw purchased the business from the store's second set of owners, brothers Bill and Zach Winchester, who purchased the business from Dillard when he retired in 2009. To this day, the 80-year-old Dillard works most every Wednesday at the store to fit loyal, long-time and more recent customers for shoes.

Outlaw, who is now 45 years old, said he learned the value of customer service and innovation during his work in the early days of Home Depot as the Atlanta-based retailer was growing rapidly. He said he has tried to bring those skills to the hometown running store concept that Fast Break developed in Chattanooga. Outlaw brought a point-of-sale system and has stressed to his staff to work with consumers to meet their needs. That has kept customers coming back, Outlaw said. 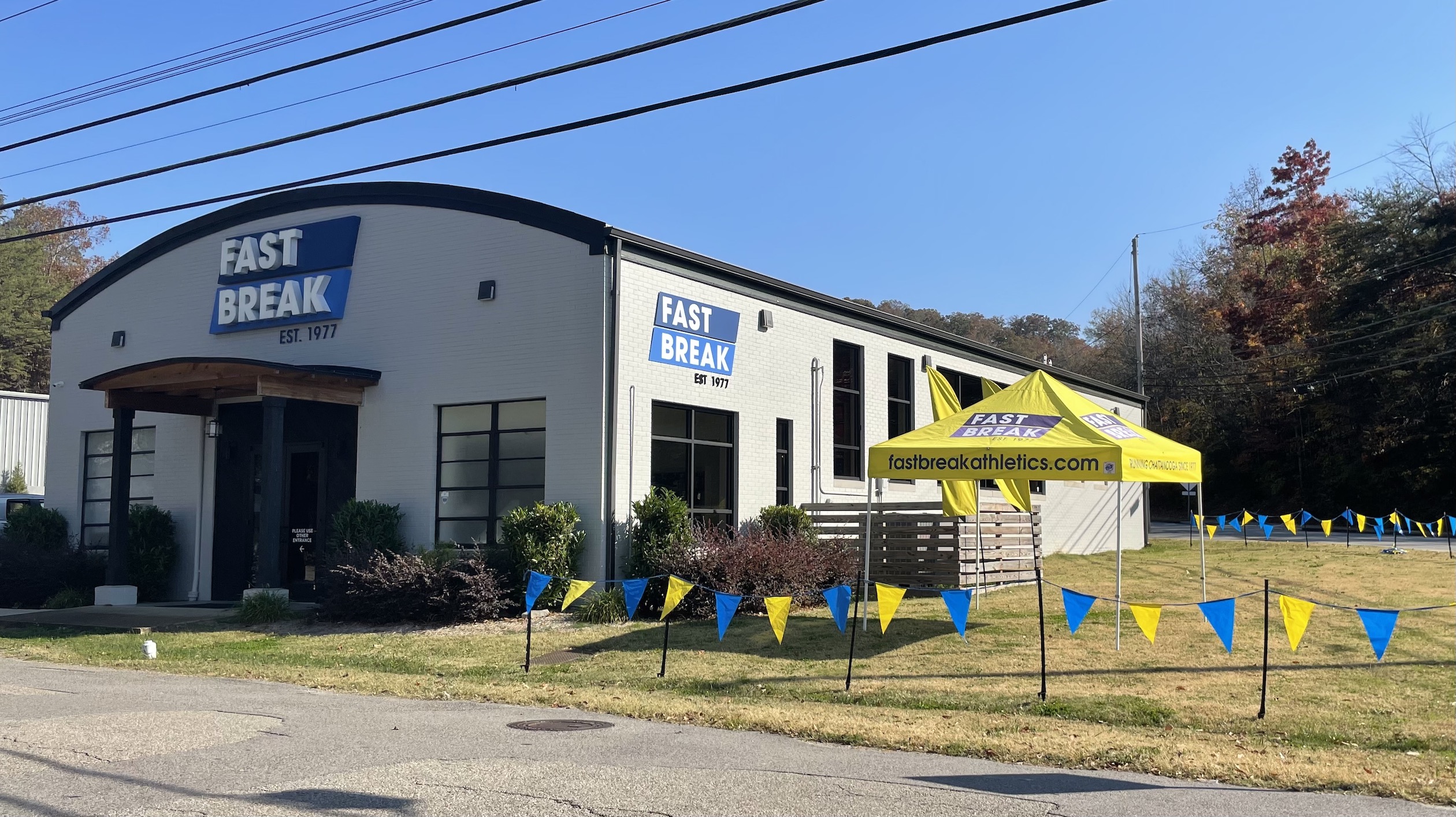 Staff photo by Dave Flessner / Fast Break Athletics sets up outdoor tent at its store on Hamilton Avenue in North Chattanooga for one of its running events. The store is celebrating its 25th anniversary this month.

Fast Break is the oldest specialty running shoe retailer in Tennessee and one of the 20 oldest such stores in the country, Outlaw said.

The store not only sells running shoes, equipment and apparel, but it is also an active supporter of local running tournaments and events as one of the prime sponsors for the annual Cam Run and the Chattanooga Chase, among other runs. Every Sunday morning for more than eight years, runners gather at the North Chattanooga store for an early morning fun run around town.

"The legacy that I want Fast Break to continue, even beyond my lifetime, is that it's not all about the numbers and making a dollar. It's about supporting each other in our community to better ourselves through health and fitness, however that looks to each of us," Outlaw said.

With an inventory of over 3,000 shoes and retail connections with most of the major running shoe manufacturers, Outlaw said Fast Break is able to maintain supplies and prices to compete with big box and online retailers. Outlaw bought the current store location at 802 Hamilton Ave. in March 2021 and, after renovating the 3,800-square-foot building, opened the store a year ago. The structure opened in 1952 as the Cherokee Creamery, distributing Cherokee milk and ice cream in the Chattanooga area.

But Outlaw said the key advantage for Fast Break is the experience and knowledge of its staff, which collectively have more than 150 years of experience finding the right footwear for runners, walkers and others.

"Our comparative advantage is our people," he said. "You can find the products sold in our store in other places, but to find our level of customer service and expertise -- collectively more than 150 years of experience on our team --elsewhere is like finding a needle in a haystack."

Fast Break has focused on personalized measurements and service throughout the company's history, but that was challenged during the pandemic when the store was forced to close it brick-and-mortar location on Cherokee Boulevard. The company shifted to social media connections and personal shoe deliveries to its customers when the store couldn't open.

Joey Howe, who store employees refer to as "the manual" after working in the business for 36 years, recalls working at the store when it began at Eastgate mall as a franchised location of Athletic Attic, which once had five area stores. Through different locations and owners, Howe said the passion for running and personal service has remained and that has helped build a community of runners and enthusiasts for Fast Break.