Staked to a four-shot lead Sunday in the Houston Open, Finau stretched it to eight strokes on the back nine and sailed to his third PGA Tour victory of the year. With three bogeys that affected only the margin, he closed with a 1-under-par 69 and won by four.

Finau won only once in his first 185 tournaments upon joining the PGA Tour. Now the 33-year-old Utah native has four victories in the past 30, including three wins in this calendar year. Sunday's triumph was his first of the tour's 2022-23 schedule; he had back-to-back wins in July at the 3M Open (by three strokes) and the Rocket Mortgage Classic (by five strokes).

He also won the 2016 Puerto Rico Open and the 2021 Northern Trust, both times in a playoff.

"I've always had belief, but confidence when you win is contagious," Finau said. "I'm starting to put together a full-package game."

It certainly showed over four days at Memorial Park. Finau seized control with a 62 in the second round Friday morning ahead of the change in weather and was superb in his bogey-free round of 68 in Saturday's cold and wind. No one came close to catching him Sunday.

He finished at 16-under 264 and moves to No. 12 in the Official World Golf Ranking after shaking off some rust and missing the cut the week before in the World Wide Technology Championship at Mayakoba.

PGA Tour rookie Tyson Alexander won the de facto B flight Sunday, and it was a big deal.

Alexander made a 30-foot birdie putt on the 18th hole for a 66 and moved out of a tie for second to be the sole runner-up. That was worth enough FedEx Cup points that the 34-year-old from Florida should be a virtual lock to qualify for the postseason next summer.

"Great week for me," Alexander said. "I wish Tony would have taken the week off."

Finau said he felt uncomfortable with such a large lead at the start of the round, and he conceded he had some doubts about how he would play. Those didn't last terribly long. He rolled in a 15-foot birdie putt on the second hole, then quickly pulled away from the field.

"It was one of those days I fought and fought, and I made a lot of nice putts that calmed me," Finau said. "I've never been in this position. I had a lot of nerves. Overall, as the round went on, I felt better. I was happy to get the W today."

He didn't make a bogey until the 10th hole, and then he dropped two more shots along the back nine from a bunker and with a long three-putt. Even so, no one ever got closer than the four-shot margin at the end of the round.

Noren moved to No. 45 in the world. He will need to stay in the top 50 by the end of the year for any hope of an invitation to the Masters in April.

Scottie Scheffler, the reigning champion of that major tournament, closed with a 67 and tied for ninth at 6 under. He needed a win to replace Northern Ireland's Rory McIlroy at No. 1 in the world.

McIlroy will play in the DP World Tour Championship that starts Thursday in Dubai, wrapping up the European circuit's season, while Scheffler will next play at the Hero World Challenge on Dec. 1-4 in the Bahamas, a 20-man field that offers world ranking points.

The group level with Scheffler on the leaderboard included Chattanooga resident Stephan Jaeger (67) and Chattanooga native Keith Mitchell (68) — it was the first top-10 finish of the new season for each — and they made up half of a quartet of Baylor School graduates in the tournament. Harris English (73) tied for 39th at par and Luke List (77) tied for 57th at 5 over. 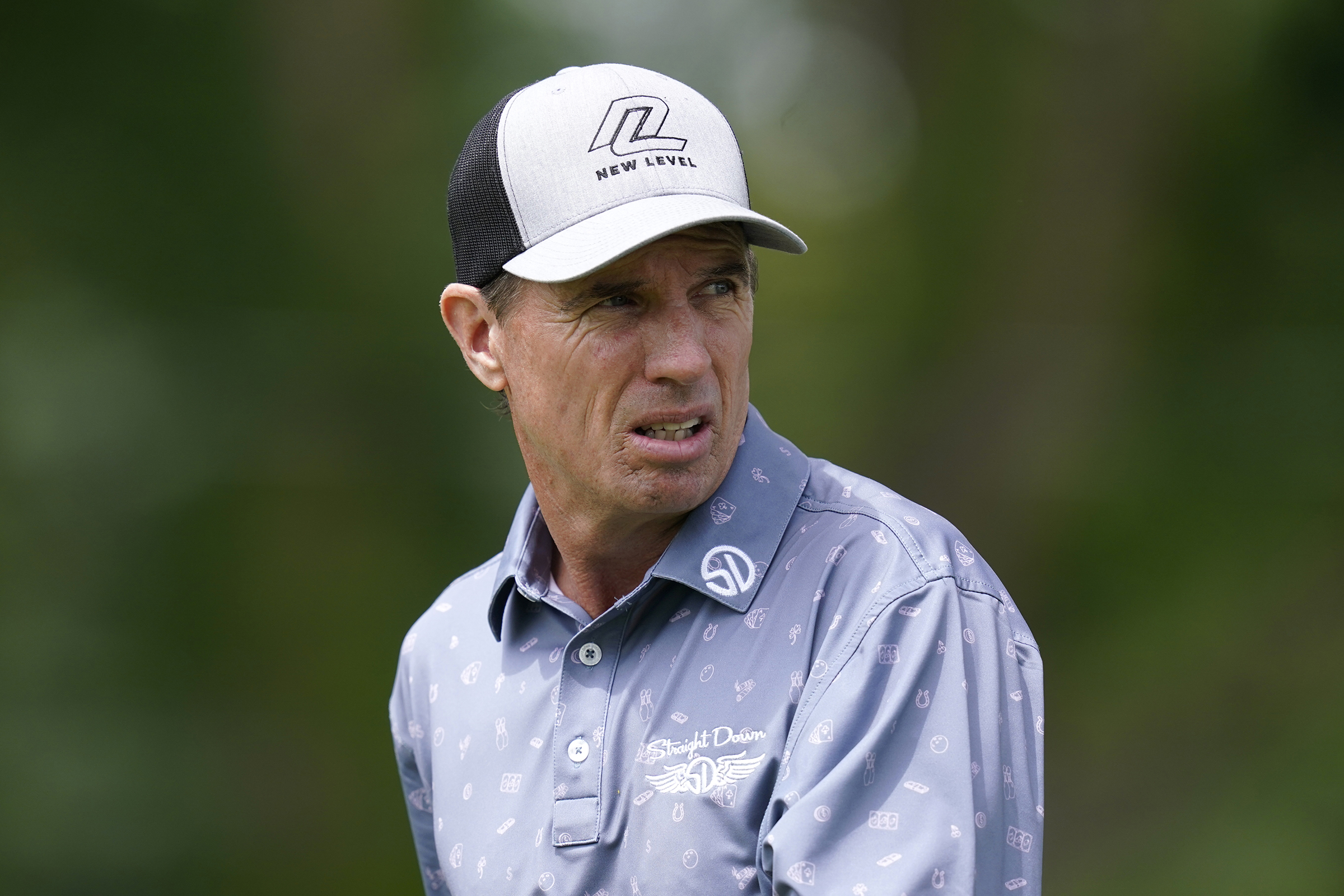 PHOENIX — Steven Alker played around the world on whatever tour would have him.

He started at home in New Zealand in 1989, had stints on the PGA Tour, in Europe, Asia, Canada, minor league circuits — anywhere he could keep alive the dream of playing professional golf.

Alker's circuitous path reached a pinnacle on the PGA Tour Champions, where a late-career mulligan allowed him to transform from journeyman to champion.

Alker shot a 3-under-par 68 to finish third behind record-setting Padraig Harrington in the Charles Schwab Cup Championship, with the 51-year-old New Zealander securing the season-long Schwab Cup on the 50-and-older tour.

"I've played everywhere; I think that kind of helped today, in a way," Alker said. "It's been an amazing journey, and just to be here is amazing."

Harrington's path to the Schwab Cup required not only winning but having Alker finish outside the top five. The 51-year-old Irishman took care of the winning by running away from the field, shooting 65 in breezy conditions at Phoenix Country Club.

He finished at 27-under 257 to break the senior circuit's 72-hole record of 258 set by Tom Lehman at the 2012 Schwab Cup Championship. He also matched Jack Nicklaus' record of 27 under at the 1990 Kaulig Companies Championship.

"To play was Padraig was difficult because, do I chase him? Do I protect?" Alker said. "I just tried to play my game as good as I could. He played amazing and deserved to be champion."

Alker trailed Harrington by five shots heading into the final round, but the players behind were his only concern in terms of the Schwab Cup, and it got tight on the back nine.

Alex Cejka made an early move, opening eagle-birdie to move ahead of Alker on the front nine. Alker had his first bogey of the tournament when he had to punch out after his tee shot on the par-4 12th landed against the lip of a fairway bunker. He added another on the par-3 13th hole, dropping to 17 under.

That put American player Lee Janzen a shot behind Alker, with Miguel Angel Jimenez two back and Stephen Ames still within reach at 14 under.

Alker gave himself more of a cushion with a 15-foot birdie putt on the par-4 14th and added another at the short par-4 16th. He left a birdie putt on No. 18 on the lip to finish at 19 under and take the tour title.

"The pressure's been on him right from the start of the year all the way through," Harrington said. "He had a lead, and several of us were catching him all year. It's very impressive that he's not just held on, but he's won in style."

The PGA Tour Champions gave Alker another opportunity in a career that took him around the world, including three seasons on the PGA Tour and two in Europe. His best year was 2014, when he earned $261,901 on what is now the Korn Ferry Tour, and he reached his highest world ranking at No. 191 in 2002.

Alker started his PGA Tour Champions career as a Monday qualifier at the Boeing Classic in August 2021, picking up a top-10 finish that earned him a spot in the following week's tournament. He followed with four more top-10 results to keep playing, earned his way into the postseason and eventually won to secure a full card.

The confidence snowballed into this season, when he won five times while earning more than $3.3 million.

Korda on top of the world (again)

BELLEAIR, Fla. — A year Nelly Korda would like to forget is ending with the 24-year-old in a more familiar position as the No. 1 player in women's golf.

Locked in a battle with Lexi Thompson along the back nine, Korda pulled ahead with birdies on the 16th and 17th holes and held on for a 6-under 64 and a one-shot victory in the LPGA Tour's Pelican Women's Championship.

Thompson closed with a 66 to finish the 54-hole event at 13-under 197, two shots ahead of Allisen Corpuz (69) as Americans took the top three spots in the final event before the season-ending Tour Championship, which starts Thursday in Naples.

Korda won at Pelican Golf Club for the second straight year, and this time it pushed her past Thai teenager Atthaya Thitikul to No. 1 in the world. Korda started the year in the top spot, but then she missed four months with a blood clot in her left arm and struggled to regain her form. Her only victory in 2022 had been a team event on the Ladies European Tour.

The tears when it was over Sunday — she finished the 54-hole event at 14-under 196 — showed how much this win meant.

"It's been a tough year," she said. "I missed two cuts in Arkansas and Dallas, but I kept my head high and worked really hard. It feels really good to be on top."

SUN CITY, South Africa — Tommy Fleetwood ended three years without a victory as he closed with a 5-under 67 to win the Nedbank Golf Challenge for the second straight time.

The 31-year-old English player overcame a three-shot deficit and held on to win the 72-hole event at 11-under 277, one ahead of New Zealand's Ryan Fox, who closed with a bogey for a 68. Fox could have moved past Rory McIlroy atop the DP World Tour points list with a win.

India's Shubhankar Sharma (69) was third at 9 under.

Fleetwood also won this tournament in 2019, and it was canceled the past two years because of the coronavirus pandemic.