Bale converted the resulting penalty kick in the 82nd minute, giving Wales a 1-1 draw Monday night that left the Americans feeling frustrated and made their path to the knockout stage more precarious.

“You feel like you have the game and you’re going to win the game,” midfielder Brenden Aaronson said. “It’s a punch in the face.”

Tim Weah put the Americans ahead in the 36th minute off a pass from Christian Pulisic, scoring in front a crowd that included his father, former FIFA Player of the Year and current Liberia President George Weah.

Back in the World Cup after missing the 2018 tournament, the United States had only to close out the final minutes. But Brennan Johnson made a throw-in that Aaron Ramsey cut back to Bale, who had his back to the goal near the penalty spot. Zimmerman's sliding tackle took out Bale's left leg, and Qatari referee Abdulrahman Al-Jassim pointed to the penalty spot.

“He probably just puts his leg not for the ball but to try and get in the way of me hitting the ball," Zimmerman said. “So I kind of went through him and I think I still got the ball. But clever move — I wish I would have seen him out of the corner my eye.”

Shooting in front of the Red Wall of supporters, Bale sent his kick past goalkeeper Matt Turner for his 41st goal in 109 international appearances, salvaging a point for Wales in its first World Cup match since 1958.

“Obviously, a difficult game,” Bale said. “First half was not how we wanted to play and the United States played really well. We played quite poorly.”

Next up for the United States is a high-profile matchup Friday against England, which opened with a 6-2 rout of Iran. Wales faces the Iranians.

“It think it’s pretty clear — a disappointing result for us,” Turner said.

Weah, just 22, was part of a new-look American team that is the tournament's second-youngest.

Yunus Musah, at 19 years, 358 days the youngest American to start a Cup match, started the move to Weah's goal when he headed the ball to Josh Sargent at the midfield stripe. Sargent dished off to Pulisic, who burst up the middle of the field. On his fourth touch Pulisic rolled the ball ahead to Weah, who timed his run perfectly to break in ahead of Neco Williams. 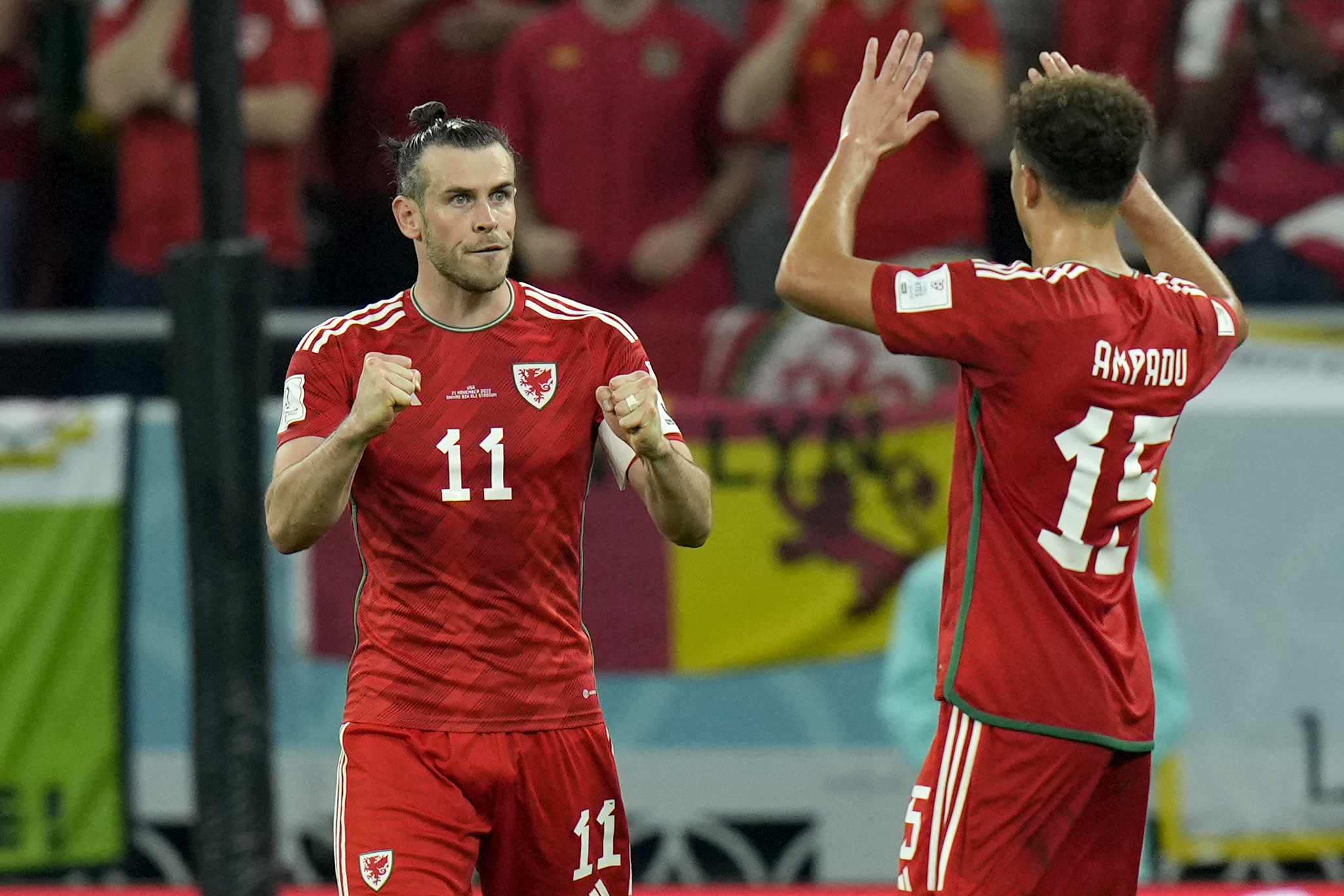 Wales' Gareth Bale celebrates with Ethan Ampadu, right, after scoring his side's first goal from the penalty spot during the World Cup, group B soccer match between the United States and Wales, at the Ahmad Bin Ali Stadium in Doha, Qatar, Monday, Nov. 21, 2022. (AP Photo/Francisco Seco)

From near the penalty spot, Weah used the side of his right foot to poke the ball over the left thigh of sliding goalkeeper Wayne Hennessey for his fourth goal in 26 international appearances.

“It's a dream come true for every attacker, for every player to score in a World Cup,” Weah said, "and I did that tonight in front of my fans, my teammates, my family."

In the 750th international U.S. match, the Americans started a U.S. Cup record 10 players from European clubs, with only Zimmerman from Major League Soccer. DeAndre Yedlin, who entered in the 74th minute, was the only American with previous World Cup experience.

Sargent nearly put the Americans ahead in the 10th minute when he hit a post with a header from Antonee Robinson’s cross.

After the U.S. dominated the first half with 66% possession, Wales switched to a three-man attack and had 67% in the first 15 minutes of the second. Ben Davies’ header in the 64th minute was pushed over the crossbar by a leaping Turner.

The match was played in the Arabian desert west of Doha at rebuilt Ahmad bin Ali Stadium, lit in brilliant colors and featuring an exterior facade meant to replicate undulating sand dunes. The U.S. Soccer Federation sold about 3,300 tickets, and Secretary of State Anthony Blinken was on hand in the crowd of 43,418.

“The nerves were there,” Pulisic said. “Now we have to figure out how to put that together for 90 minutes.”

U.S. midfielder Gio Reyna was held out because of what coach Gregg Berhalter said was tightness without specifying. Berhalter envisioned him playing against England. 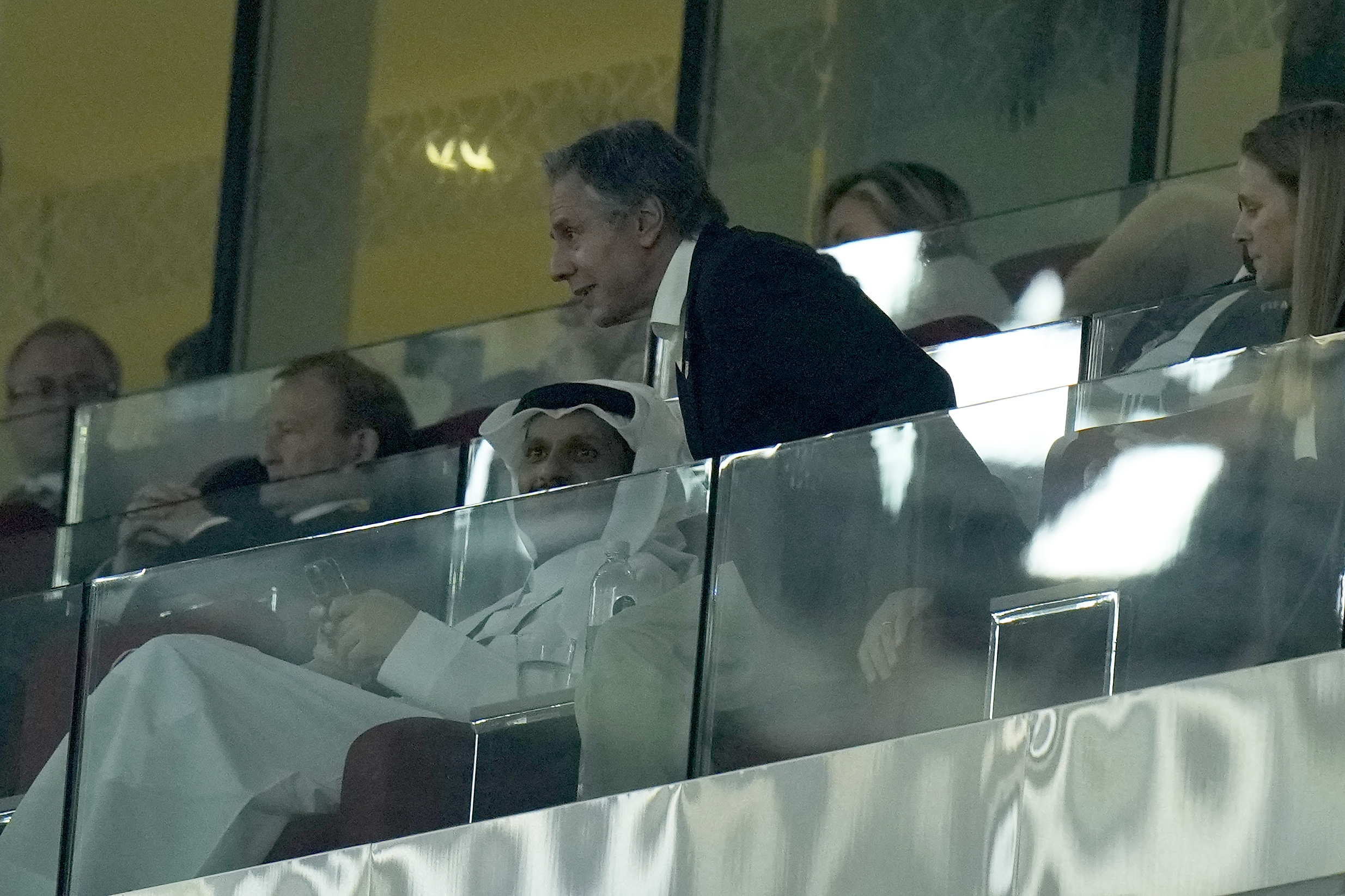 U.S. Secretary of State Antony Blinken, center, sits down to watch the second half of the World Cup, group B soccer match between the United States and Wales, at the Ahmad Bin Ali Stadium in Doha, Qatar, Monday, Nov. 21, 2022. (AP Photo/Francisco Seco)
Advertisement
Advertisement