When an East Ridge motel closed last week, displacing as many as 700 people, it didn't take long for local organizations and individuals to respond with emergency housing, food and other resources.

Since the motel's closure, the Chattanooga Regional Homeless Coalition has placed 62 children and 92 adults in other hotel rooms as temporary housing, according to director Mike Smith.

The money for those rooms came from a $50,000 emergency grant from the Tennessee Housing Development Agency, which the coalition will have to reimburse, and more than $37,000 from individual donations to a coalition fundraiser since Wednesday morning.

EPB also issued a statement Monday urging people to give to the coalition fundraiser, gathering more than $6,000 for emergency housing through their own link.

Smith said by phone Monday that the coalition estimates more than 170 children and seven people on hospice were living at the motel at the time it was closed.

Many Budgetel residents said they had no other options for housing and planned to turn to shelters or sleep in cars as cold weather came through the area over the weekend.

(READ MORE: 'I have no idea what to do': East Ridge motel residents react to possible closure)

Tracey Myers, who shared a room at the Budgetel with a partner and a woman recovering from a stroke, said in an interview they had paid for the space through Nov. 25. She estimated that without a refund from motel ownership, the three of them would be out around $350.

"A lot of the older people here are on fixed income," Myers said. "They can't afford to lose that. There are a lot of children here, there's even a couple that has a newborn baby."

Several others also told the Chattanooga Times Free Press last week they'd prepaid for their rooms shortly before being kicked out, spending between $200 and $1,000 to cover as much as a month's stay. Without that money, finding a new room or qualifying for a lease is even more difficult, they said.

To find temporary shelter for residents in the short term, nonprofit groups, churches, government agencies and individuals pooled money, time and other resources.

The homeless coalition secured 56 hotel rooms for two weeks, Smith said. Families with children were given first priority, followed by those with medical needs.

"We know that, as always is the case, people fell through the cracks," Smith said. "It's unfortunate. I mean, we already had 1,000 people (in Chattanooga) we needed to house."

Two families were also admitted to a family shelter in downtown Chattanooga, run by the Chatt Foundation, formerly the Community Kitchen. Foundation CEO Baron King said in a phone interview Monday the organization's case management team has been "inundated with calls" from displaced residents looking for housing.

Housing navigators and case managers from Chattanooga's office of homelessness and supportive housing have also been working with displaced residents, director Sam Wolfe said by phone Monday. Though the motel isn't in city limits, Wolfe said his office has absorbed some of the need and can hopefully help residents find housing and apply for assistance.

On Wednesday morning, Union Gospel Mission's Rev. Jon Rector set up a table outside the Budgetel and handed out bagged meals, hot coffee, oatmeal and toiletries to displaced residents. Rector said that since then, the mission has been flooded with calls from people looking for a way to help with time or money. Donations allowed the group to put up one displaced family of three in a hotel over the weekend, he said. 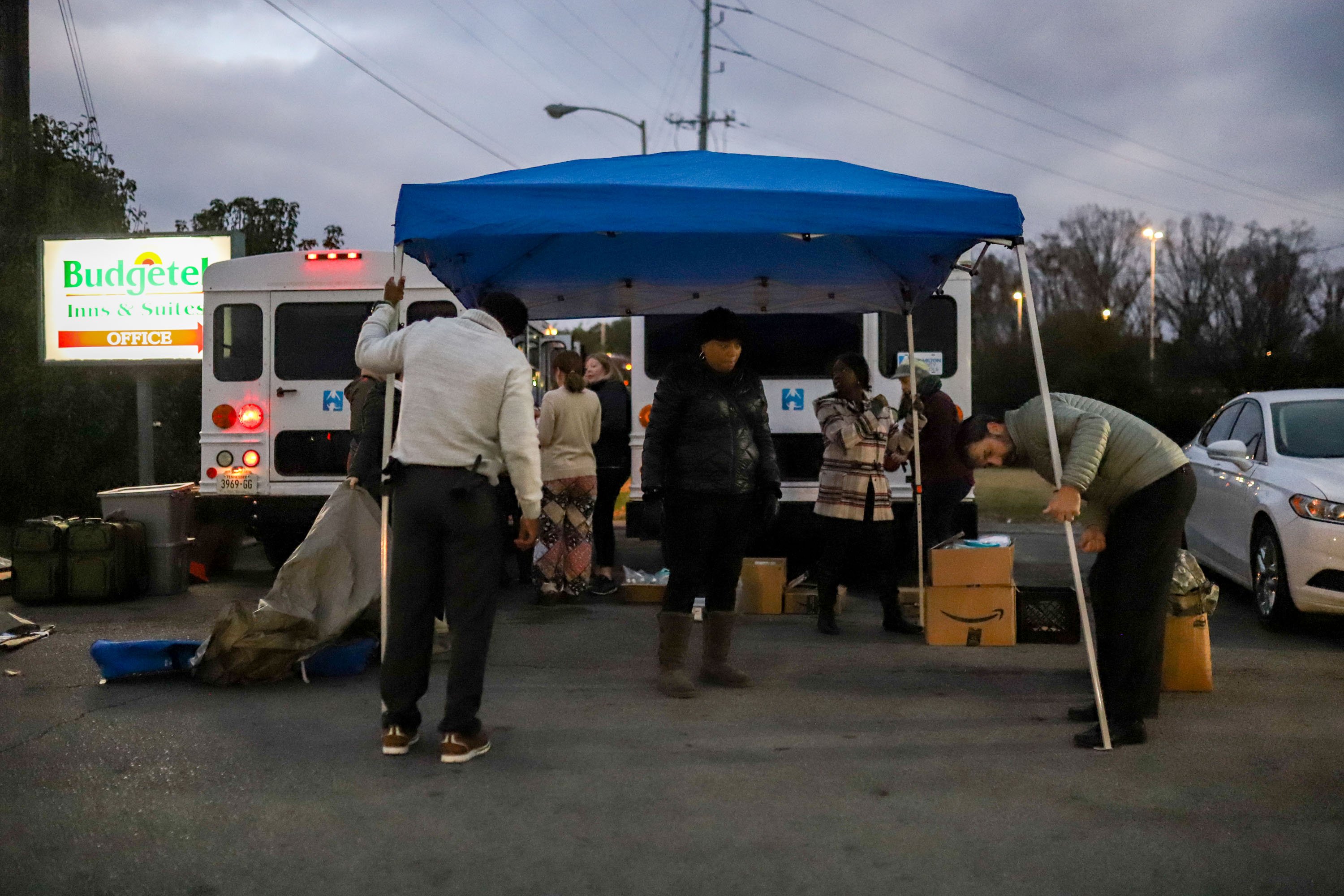 Staff photo by Olivia Ross / School district employees, officials including Superintendent Justin Roberston, and other local organizations such as The Union Gospel Mission wait outside the Budgetel to provide resources on Wednesday. After being told to leave the building by early Wednesday morning, many residents of the Budgetel in East Ridge begin packing their belongings. The building is said to be shut down due to high crime.

Social media posts encouraged people to donate food Thursday to the Chattanooga Area Food Bank, which provided boxes to those put up in hotel rooms by the homeless coalition.

"Food is the easiest resource to access," food bank President and CEO Melissa Blevins in a phone interview Monday. "That's the fastest thing we can do in Chattanooga when families are facing crisis."

Though many residents have met short-term needs including food and temporary shelter, the long-term need for permanent housing hasn't gone away, organizers said.

"The food bank will be here. We're ready to make sure people have enough to eat," Blevins said. "But I think the long strategy is the community has to come together with our corporate partners and our government to make sure we've got affordable housing and low-barrier shelters."