Adva Kasay did not grow up really celebrating Sigd, the Ethiopian Jewish day of fasting and repentance that began Tuesday night and lasts through Wednesday. She attributes that to the young age at which her parents came to Israel from Ethiopia.

Nonetheless, she seeks to convey the tradition in her capacity as emissary to the Jewish Federation of Greater Chattanooga. She recently made a slide-based presentation to help area residents learn about the holiday and more generally the Ethiopian Beta Israel community, which has deep and often overlooked roots in the Jewish tradition.

The ninth emissary -- or shlicha -- since the Chattanooga Jewish Federation started accepting them, Kasay, who is in her early 20s, arrived late last summer. Now, as she works to teach Chattanooga about the world from which she came, she, too, must adjust to life in her new temporary home.

The large nonprofit organization Jewish Agency for Israel reports receiving more than 10,000 annual applications for its decades-old emissary program, which seeks to provide Jewish communities around the world with a "living connection to Israel."

Michael Dzik, the executive director of the Jewish Federation of Greater Chattanooga, said by phone Tuesday that the local federation began hosting the emissaries 12 years ago.

Many came from big cities such as Jerusalem or Tel Aviv. Kasay comes from the smaller town of Kiryat Gat, where, she said at the Jewish Federation offices Monday, everybody knew everybody and there was not much to do. Her aunt, uncle and grandparents all lived close, and she and her playmates would run around between their houses, unlocked and open to all.

After school, she began her compulsory military service. First came basic training. She recalled struggling at first because she was not used to being yelled at for no reason.

Then came officer training. She specialized in social work -- helping fellow soldiers with their bureaucratic and personal problems. She grew tougher. One time, Kasay and her comrades spent a week living in the desert, she said, and she cried from the cold.

After her service, Kasay went to work a security job at an Intel facility near her home. She stood guard at entry booths, letting people with the right credentials pass.

She made several friends there. They made videos on TikTok. One featured the voice of some guy from the internet intensely -- and perhaps ironically -- encouraging women to be tough and defend themselves, according to Kasay's translation.

Jostling around in their security uniforms, wielding pepper spray, Kasay and her friend dubbed the words so it sort of looked like they were the ones speaking, and they pretend-yelled at the camera, poorly concealing their grins. The video went viral and crossed the social media feed of their boss.

Her boss, said Kasay, was "very disappointed in us."

After a few months, Kasay decided it was time for an adventure. She also felt people didn't know much about the Ethiopian Jewish community. She went through several interview rounds for the Jewish Agency for Israel's emissary program.

Kasay interviewed with Dzik and Ann Treadwell, the Chattanooga Jewish Federation's program director. "There was something about her poise," said Dzik, who sensed even over Zoom that Kasay was uncommonly caring and outgoing.

Kasay had her reservations. Her primary association with the American South was racism. But pictures of Chattanooga she found online charmed her.

Dzik said when his organization began hiring emissaries, the federation housed them around East Brainerd, not far from the Jewish Federation offices. But many Israelis aren't accustomed to suburban, car-based living, and the organization soon started placing them near downtown, to which he and Treadwell took Kasay when her plane arrived late last summer.

Now amid giving local talks at local churches or hanging out with children at Sunday school, Kavay makes her home in a strange land.

The light switches are weird -- they protrude from the walls. And carpets on the floor? What's that about? Her English has improved. She said she likes the flexibility and energy of "lol." In Hebrew, she said, they just say "hhh" -- for "hahaha."

She said she doesn't speak the language of her Ethiopian forbearers -- though many friends from a similar background back home do. She anticipates having children, trying to teach them the few words she does know.

"But their kids definitely are not gonna know any," she said, adding that this potential future concerns her. She hopes it can be avoided. 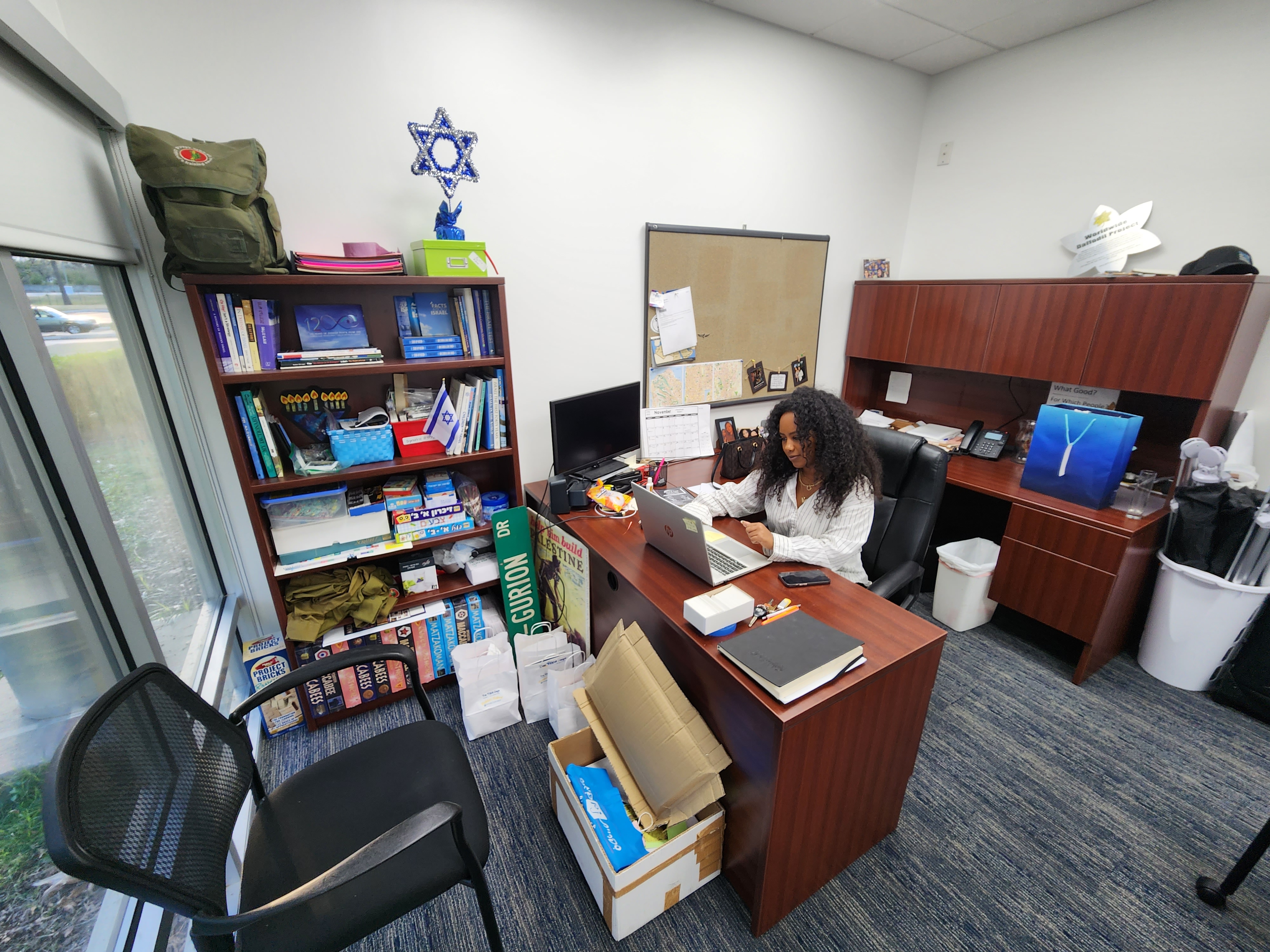 Staff photo by Andrew Schwartz / Adva Kasay in her office Monday at the Jewish Federation of Greater Chattanooga. She arrived from Israel late this summer to serve as a Shlicha — a kind of cultural emissary.
Advertisement
Advertisement