It begins as a slight smile, but as Deshaun Bass continues to explain his role on Tyner Academy's top-ranked football team, his face is quickly overtaken by a toothy grin that brightens his entire face

"I'm just out there trying to do my job and have fun with my teammates," said Bass, an autistic student-athlete who is one of two kickers the team uses for extra points.

The left-footer also specializes in directional kickoffs that keep the ball out of the hands of opponents' dangerous returners.

What began as just goofing off before practice with Rams assistant Twon McClain four years ago has turned into a key role in helping the program return to the Class 2A semifinals for the first time in five years.

"We were just tossing the ball around one day and instead of throwing it back, Bass punted it to me," McClain said. "And, I mean, he boomed it. I asked if he could do it again and he did. So then we put the ball on a tee and it didn't take long to realize the kid had a talent for it."

Bass has connected on 10 of 13 extra point attempts and his directional kickoffs -- which he pooches high into the air toward either sideline -- have been effective in pinning opponents deep in their own territory.

Forcing opponents to drive the length of the field has been a key in helping make Tyner's defense the stingiest in the state in 2A. The Rams have allowed seven points or less in 10 of 13 games, including six shutouts.

Tyner (12-1) hosts York Institute (9-4) in Friday's semifinal round, looking to advance to the BlueCross Bowl state championship game for the fourth time in program history. 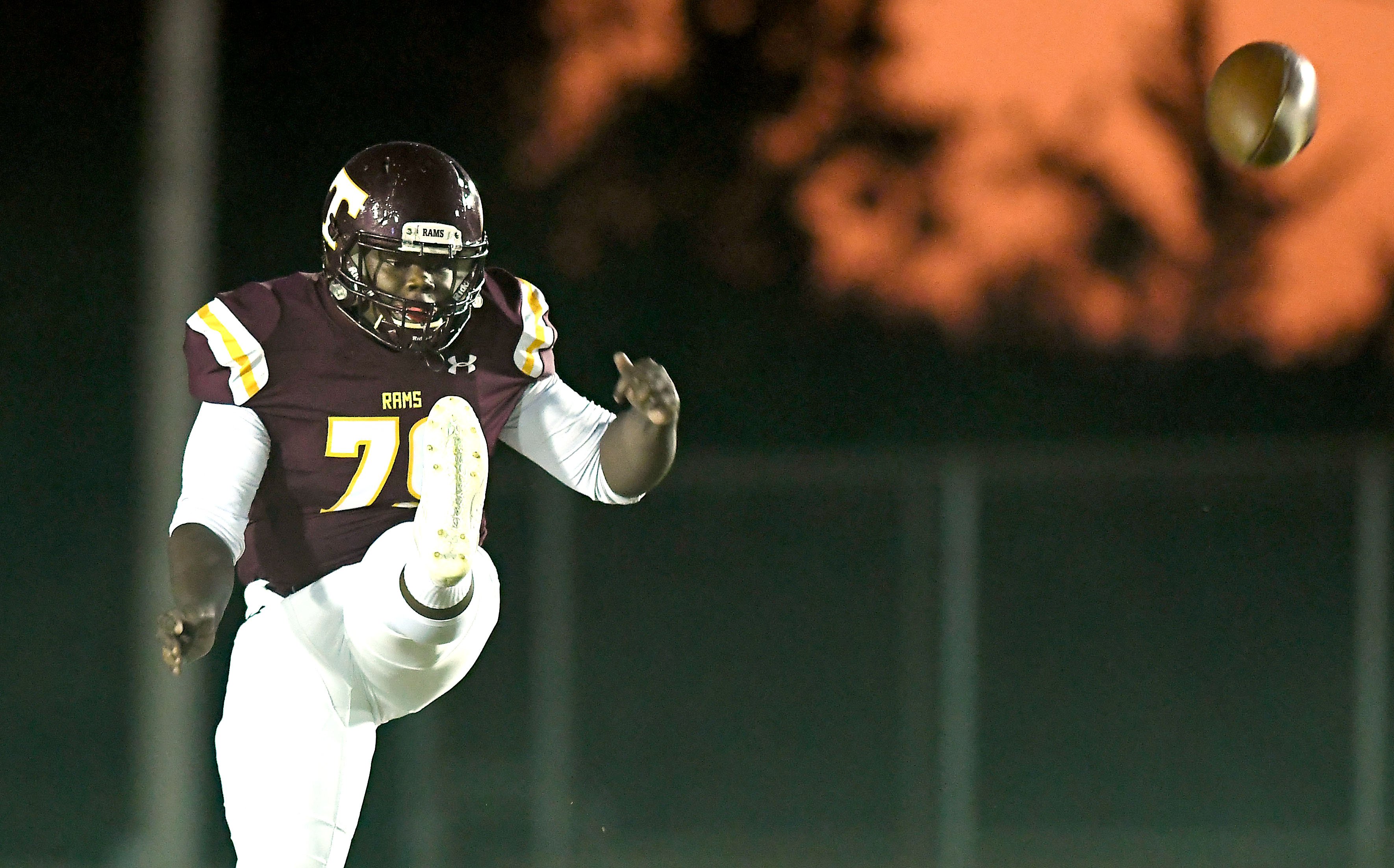 Staff Photo by Robin Rudd / Tyner's Deshaun Bass (79) kicks off for the Rams. The Tyner Rams hosted the Meigs County Tigers in a TSSAA football game on October 14, 2022.

This is only the second time York has reached a semifinal, losing to Milan in 2009. This year's Dragons have won their last four games by an average of 39-7 but will be challenged by a Rams offense, led by Mr. Football finalist quarterback Josh Jackson, which is averaging 45 points in the playoffs.

"Bass is a big part of what we've done this season," said Jackson, who has thrown for 809 yards, nine touchdowns and no interceptions through three playoff games. "Him getting his chance to be on that field just shows what hard work can do, because he definitely puts in extra time practicing.

"It's a beautiful thing to see all that work paying off on Friday nights. Bass is a guy who loves Tyner and loves playing the game. I remember before one of our games, he stood up in front of the whole team and said that us seniors will never get these times back, so we better make the most of it. I was like, 'Dang, Bass is getting the whole room hyped.'

"I've known him since we were in sixth grade and he's always had a lot of energy. He's just a guy you love having on your team. We hype him up before he kicks and he hypes us up after he comes off the field."

Sometimes Bass even gets a little too hyped up after he comes off the field.

"After he made an extra point against Brainerd, I started looking around for him so I could tell him where we wanted him to put the ball on the kickoff," said Rams second-year head coach Scott Chandler. "He was all the way back on the track, waving his arms up and down trying to get the fans to stand up and cheer louder.

"As a coach, I had never worked with an autistic kid before, so the communication process has taken some getting used to for both of us. But when you tell him where you need him to put the ball on kickoffs, he hits that spot almost every time. I think him finding his role on this team has been great for him. I've seen him really come out of his shell as the season has gone, and he's definitely been a big part of what we're trying to do as a team."