A 112-year-old building that held the Classic Coin and Jewelry store in downtown Chattanooga for decades is seeing a restoration aimed at bringing back the shine to the historic three-story brick structure.

"It's a labor of love," said Lawrence Dossche of KRE Development in an interview at the 109 E. Seventh St. building on Monday.

Workers already have torn away the metal cladding that had hidden the original exterior for many years.

Dossche said the $3 million project is expected to be ready early next year and offer both retail and office space to potential users of the vacant 9,700-square-foot building near the Hamilton County Courthouse.

Inside is a large vault, which the developer plans to keep, where collectibles were stored. Dossche said he found old baseball cards and records in the vault that's located on the first floor and is anchored into the basement.

He said he has worked to put the building on the National Register of Historic Places.

"I went the historic route," said Dossche, who was formerly employed for an architectural firm and moved from New York City to Chattanooga during the coronavirus pandemic. KRE bought the building in 2019.

Justin Dumsday, managing partner for River Street Architecture, said at the site that a search revealed the building held a lot of businesses over the years.

He said those included a shoe store, the collectibles business and the Club Fiesta, which at one time claimed to have the South's longest bar.

The second and third-floor exterior windows have been restored to their 7-foot-high size, taking 10 months for them to arrive for installation, Dumsday said. 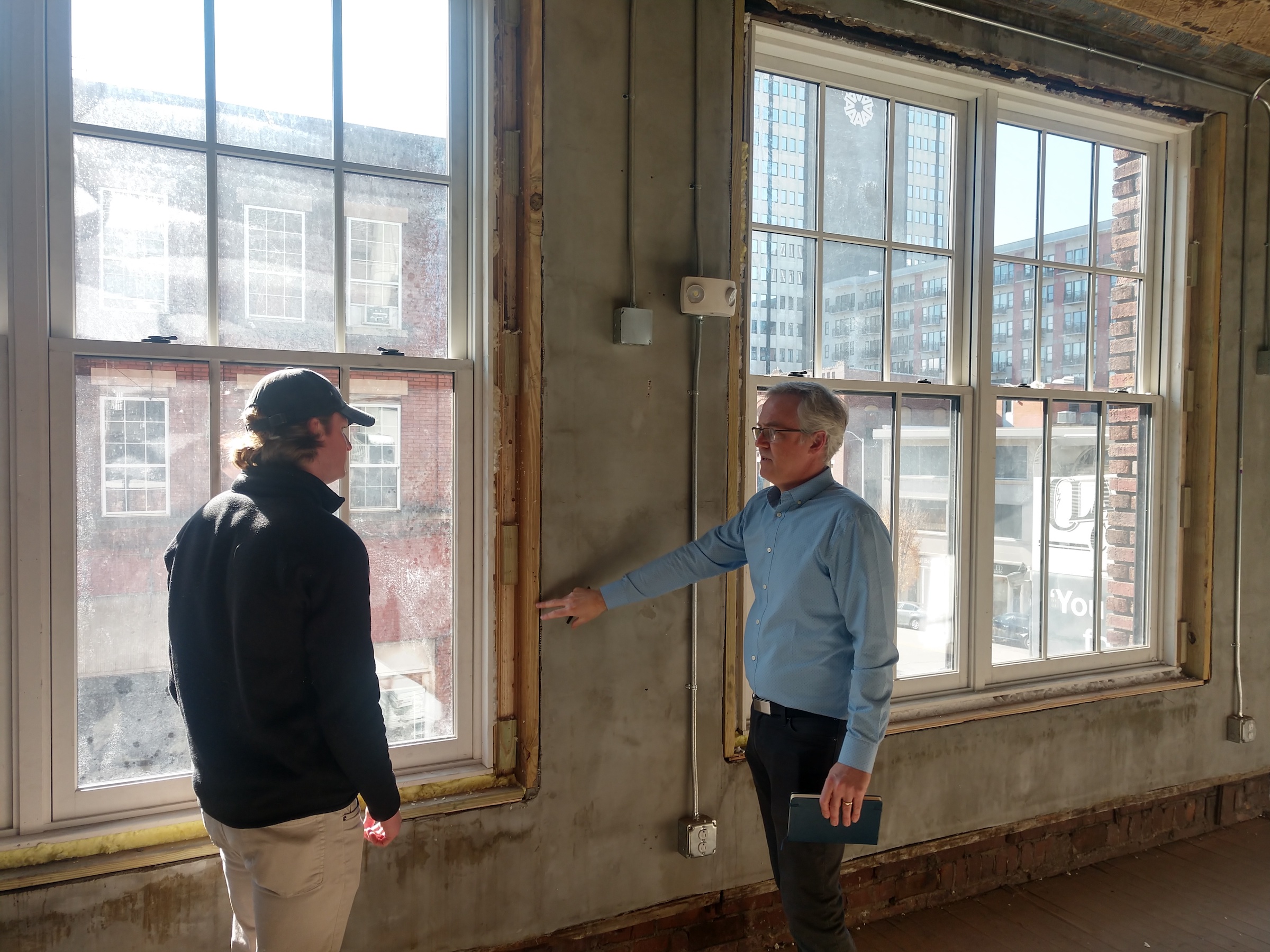 Staff photo by Mike Pare / Developer Lawrence Dossche, left, and architect Justin Dumsday check out the tall windows on the Classic Coin building in downtown Chattanooga on Monday. Plans are for the restored building to open early next year.

Dropped ceilings inside were removed to show those made of vintage tin on two of the floors, he said. A tin ceiling fitting with the historic nature of the building was placed in the top floor. Ceiling heights measuring from original wood floors range from 16 feet on the first level to 10 feet, 6 inches on the third.

Dossche said the structure could hold three separate tenants or one large venture. Proximity to the courthouse and the courts building could make it right for law offices, he said. Or the developer said he foresees "a young company" moving into the space.

"We're creating unique space with a lot of character," Dossche said about the building undergoing renovation by Construction Consultants.

He said the building could hold people who've been working out of their houses but now need offices.

"I thought about residential, but I thought it was a good opportunity for business," Dossche said.

"It kind of has a West Side Story feel, kind of New York back alley," he said.

Dossche said plans are to seek Leadership in Energy and Environmental Design status, probably coming in with a silver certification.

"I really wanted to make a splash," he said.