ATLANTA (AP) — In what was supposed to be a rebuilding year, the Atlanta Falcons are 5-7 and still in the hunt for the NFC South title.

The reality is they could be so much better if they weren’t 4-5 in one-possession games.

They were 7-2 in such situations last year.

The latest collapse, a 19-13 loss at Washington, came on second-and-goal at the Commanders 4-yard line when Marcus Mariota’s pass was tipped by Daron Payne and intercepted by Kendall Fuller with 58 seconds remaining. The pass was intended for Cordarrelle Patterson, who was open in the end zone.

“Yeah, I thought it was a great play call,” Mariota said. “You know, C.P. was open. Unfortunately, he got his hand up, made a play on it, and bounced it away.”

The previous play resulted in a 2-yard loss. Mariota tried to sneak across the goal line on a run-pass option to the left. He faked a pitch to Patterson, thinking Washington’s Montez Sweat would go for Patterson.

It didn’t work out that way as Sweat tackled Mariota.

“It was my decision,” Mariota said. “I thought I had a one-on-one opportunity with the defensive end and I thought he was crashing down on C.P. and maybe I had a chance to get a run.”

The Falcons have dropped three of their past four but face just one team with a winning record, Baltimore, the rest of the way. They’ll need to shore up their run defense after it gave up 176 yards on 34 carries. Atlanta has allowed an average of 189.3 yards rushing in the past three games.

Thanks to a stout offensive line, the running game accounted for 167 yards. Running backs Tyler Allgeier and Patterson combined for 106 yards on 11 carries apiece. Mariota added 49 yards on six carries.

Even so, it wasn’t enough.

“Every team is really good — anyone can win any given Sunday,” left tackle Jake Matthews said. “The teams that make the playoffs and play well are the ones that can find ways to pull out a win at the end, and unfortunately we didn’t do that today. There’s still a lot of football left to be played, so we have to correct this stuff and move on and get back to winning.” 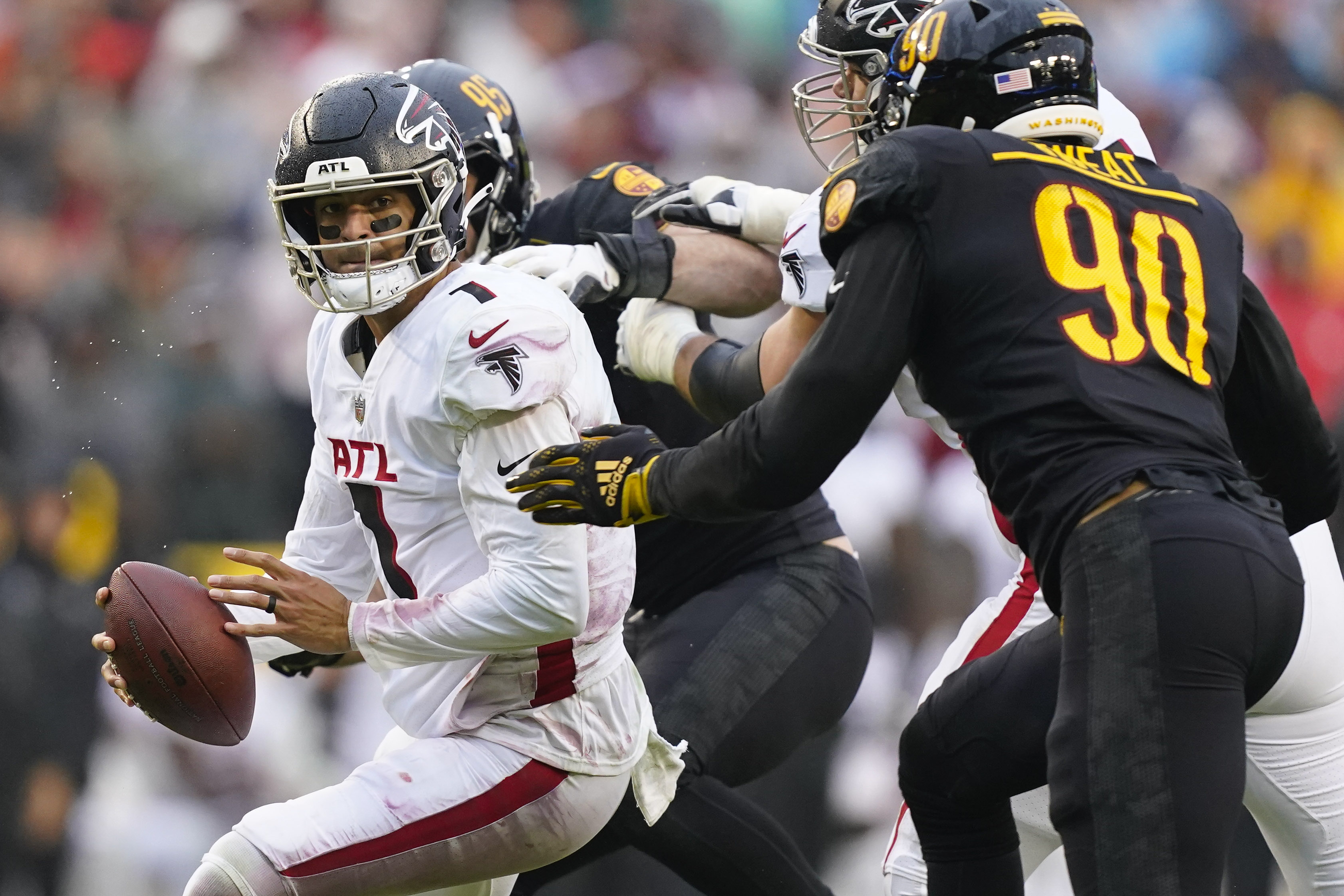 Mariota was just 15 of 25 passing for 174 yards, one touchdown and one interception. The team missed star tight end Kyle Pitts, who went on injured reserve last week with a knee injury, and tried a committee of MyCole Pruitt, Parker Hesse and Anthony Firkser that combined for 34 yards receiving and one touchdown on six catches.

“It’s tough without Kyle, right?” Mariota said. “He’s just an unbelievable player, and I thought multiple guys kind of stepped up into that role, and you have to when you’re replacing a guy like Kyle.”

Linebacker Mykal Walker intercepted Taylor Heinicke at the Atlanta 32 in the final minute before intermission, likely keeping the Commanders from taking a halftime lead in a 10-all game.

Rookie wideout Drake London, the eighth overall draft pick, had his second straight game with fewer than five targets and ended the day with two catches for 29 yards. He has yet to top 40 yards receiving since Week 3. Olamide Zaccheaus led the receivers group with five catches for 91 yards.

Ebiketie suffered a forearm injury, but it’s too early to tell if he will miss any time.

13 — the combined number of tackles, including eight solo stops, for linebacker Rashaan Evans, who leads the team this season with 67 solo stops and 52 assists.

Shore up the passing game and run defense and get ready to face Pittsburgh on Sunday before getting a bye. 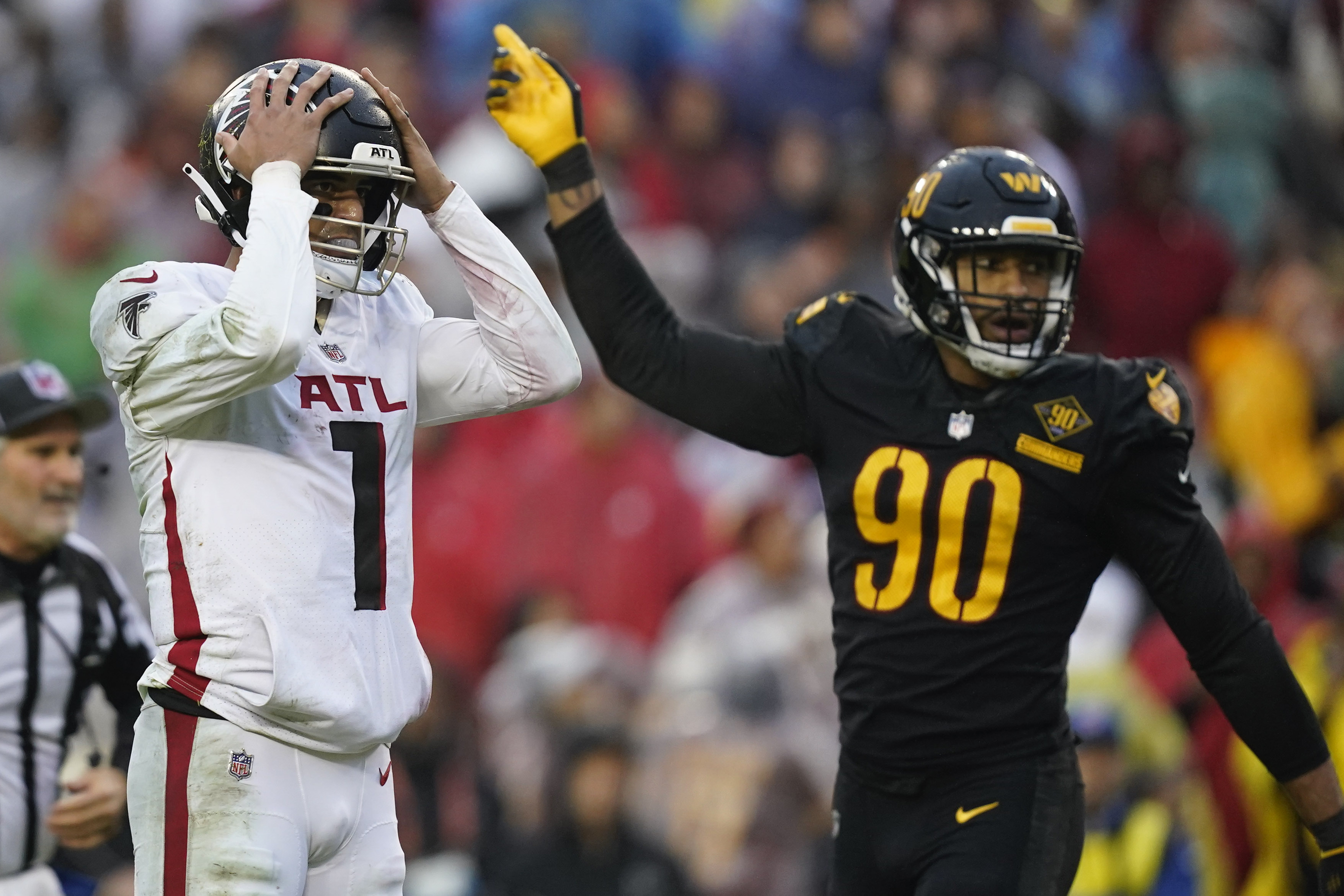