HOMESTEAD, Fla. — Kyle Larson found his way back into NASCAR's headlines, this time for a much more pleasant reason.

He held off fellow Chevrolet driver Ross Chastain to cap a dominant showing in Sunday's Cup Series race at Homestead-Miami Speedway, where Larson led 199 of the 267 laps on the 1 1/2-mile course.

The Hendrick Motorsports driver's third win of the season came two weeks after the 2021 Cup Series champion was eliminated from this year's playoffs — and a week after he was intentionally spun by 23XI Racing's Bubba Wallace in an act of retaliation at Las Vegas Motor Speedway.

On Sunday, the suspended Wallace was watching on TV from team headquarters in North Carolina.

"Definitely the best run we've had all year long," said the 30-year-old Larson, who is now one win shy of 20 in his Cup Series career.

Even though Larson can't win a driver's title this year, his Hendrick team still can, having now clinched a spot in the field that will decide the owners' championship in two weeks at the season finale at Phoenix Raceway.

"We're still technically not out of it," Larson said. "I can't win the championship, but it means more to me to win it as a team. We're going to go to Phoenix and try to get another championship."

And he will drive at Phoenix as if he's driving for his own title.

It wasn't exactly close at the end Sunday as Larson beat Chastain to the line by 1.261 seconds. Chastain could have clinched one of the four title-eligible spots in the finale if he had won.

The current eight-driver playoff field will be cut in half after next Sunday's race at Martinsville Speedway, with seven driver competing for three spots. Only Team Penske's Joey Logano, through his win at Las Vegas last week, has his berth clinched. Expect chaos.

"Track position's going to be so huge," said Joe Gibb Racing's Denny Hamlin, who has raced for the title in the finale the past three seasons but has never won a championship. "You're going to see aggressive driving."

Hamlin is on the wrong side of the cutline going into Martinsville. Chastain is second, followed by Hendrick's Chase Elliott and William Byron, who started Sunday's race in pole position.

"It took a good part of the race to get up there and get the car turning," Chastain said. "Incredible day on pit road by the boys."

There will be a race within the race next weekend. Chastain doesn't need to win to advance in the playoffs, but he didn't seem too interested in all the mathematical permutations after getting out of his car.

Martin Truex Jr., who led the field for 28 laps, was headed to the pits late in the race when a caution flag came out — and found trouble as he got there. Larson tapped the back of Truex's car, and the JGR Toyota wound up spinning 180 degrees and ending up in his stall, but with the front of his car facing the wrong direction.

It also seemed possible, given where Truex was, that he might have missed his stall entirely as the setting sun starting casting serious shadow over much of the track.

"My team said he was late turning into his stall," Larson said. "I don't know. If it was my fault, I'm sorry. I don't think it was. It's hard to see on this pit road."

For as bad as that moment was for Truex, it could have been much worse. His skidding car sent members of his pit crew scurrying for safety, some getting over the wall with just a split-second to spare.

He came back to finish sixth after racing Hamlin hard for late position, costing his teammate valuable playoff points.

Briscoe was looking for a big showing that would help his playoff hopes, or even a victory that would help him automatically advance. He didn't make it out of the second stage, completing only 160 laps, going into the wall and damaging his car beyond repair.

"It's broke bad," Briscoe said into his radio as white smoke billowed from the back of his Ford.

His title chances are badly damaged now as well, and his only path toward advancing is to win at Martinsville.

He blamed himself. Driver's mistake, he said.

"It's like I hit ice," he explained. "Frustrating. I think that's the first time I ever just crashed by myself. Embarrassing on that side. Of all the times for it to happen, that's not when we needed it to happen. We know what we need to do next week now." 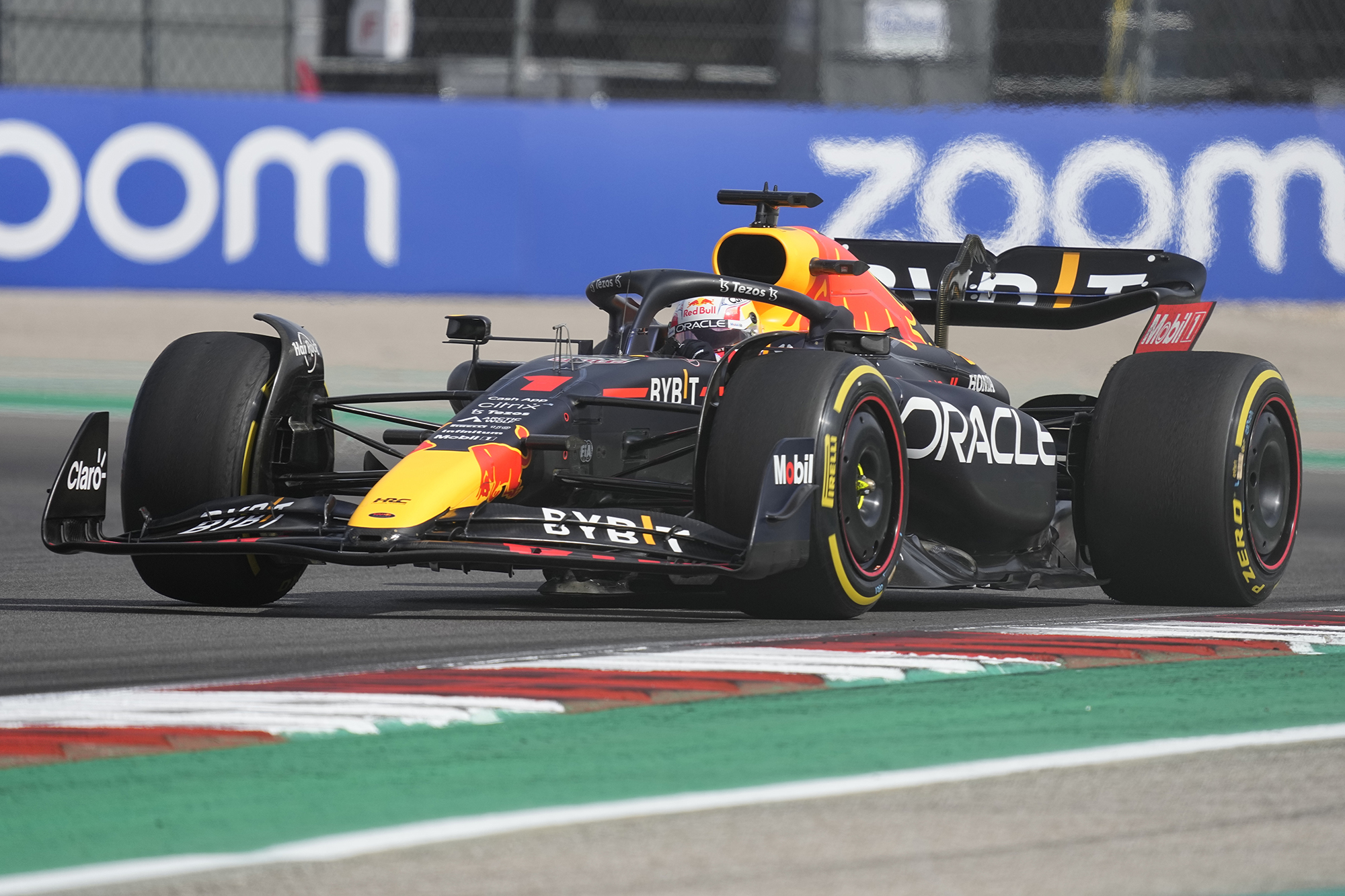 AP photo by Charlie Neibergall / Red Bull driver Max Verstappen competes during Formula One's U.S. Grand Prix on Sunday at the Circuit of the Americas in Austin, Texas. Verstappen won for the 13th time this year, tying the F1 record for single-season victories with three races remaining on the schedule.

Driver and team both delivered, overcoming self-inflicted race drama to chase down Mercedes's Lewis Hamilton and win at the Circuit of the Americas. Hamilton was second and Ferrari's Charles Leclerc was third.

"I think this is a race he would have loved to see," Verstappen said of the victory that came a day after the team announced Mateschitz, the Austrian billionaire co-founder of the Red Bull energy drinks global empire, had died at age 78.

The team was told shortly before Saturday qualifying that Mateschitz had died, and Verstappen vowed he would give everything to honor him.

"The only thing we could do today," Verstappen said, "was win."

Still, seeing the checkered flag was a relief. Verstappen's race was nearly undone when a rare slow pit stop — 11 seconds lost to a tricky change of the front left tire — dropped him out of the lead and well behind Hamilton.

He then chased down last season's championship rival and passed his Mercedes on lap 50 of 56. Verstappen had to hold off the pestering Hamilton through the final laps, and both drivers were warned not to exceed track limits that would draw a penalty.

"This one is definitely dedicated to Dietrich," Verstappen said. "I pushed it to the limit to come back."

"It felt amazing to even just be within shooting distance of Max at some points in the race," he said. "For a second, I thought we just might be able to hold on to it ... He came from a long, long way back."

The win continued Verstappen's run of dominance in 2022. He had already clinched his second consecutive season championship in Japan two weeks earlier. The Texas win was No. 13 this year, tying Michael Schumacher (2004) and Sebastian Vettel (2013) for most in a season with three races to go.

"We wanted to do that in style, and I think we did that today," Verstappen said.

Mateschitz bought the Jaguar team in 2004 and rebranded it as Red Bull in 2005. He added a second team to the Red Bull stable and named it Toro Rosso in 2006 to be a program for training younger drivers. That team is now Alpha Tauri.

The Red Bull racing program promoted Verstappen to F1 in 2015, when he was just 17, with the hopes he could become the youngest champion in series history. The dominance of Hamilton and Mercedes from 2014-2020 prevented that.

But Mateschitz, who had been reportedly ailing for months, lived long enough to see Verstappen win two championships and start what could be another dominant era for the team he founded.

F1 held a brief tribute to honor Mateschitz before the race. Large signs of "Danke Didi" (Thank you, Didi) were posted on the video screens. Vettel, who won four championships with Red Bull and now races with Aston Martin, appeared to be fighting back tears.

Verstappen also appeared to wipe away tears as he stood on the victory podium and the team gathered below him.

Leclerc was the championship leader when he won two of the first three races this season. He was asked after Sundays' race if Verstappen is starting a new era of Red Bull dominance.

"I hope not," Leclerc said. "I'll do everything I can to not let that happen .. I'm confident we can do that."

Leclerc's podium finish was a bright spot for Ferrari as he fought back from 12th at the start. He was second in qualifying but drew a 10-place grid penalty after taking a new engine.

Teammate Carlos Sainz's day was much worse. He started in pole position only to see Verstappen zip past him with an explosive bolt off the line. Sainz was then bashed by Mercedes' George Russell in the elevated switchback first turn, and his race was effectively over. The damage forced him out of the race at the end of the first lap.

Hamilton is drawing ever closer to a winless season, which would be a first in his 16-year career. The seven-time champion has 103 career victories but has reached the podium just seven times this season as Mercedes has struggled. He has finished behind teammate George Russell eight times in races they both completed.