Every winter, the sandhill cranes arrive at Hiwassee Wildlife Refuge -- tens of thousands of them, chuckling, dancing and wearing red caps. Their migration is considered one of nature's most awesome displays. And throughout the season, bird-lovers have ample opportunities to witness their local stopover.

But how do sandhills spend their summer months?

"Wings Over Water," now playing at the Tennessee Aquarium IMAX 3D Theater through February, tells the life history not only of sandhills but also of mallard ducks and yellow warblers -- three species that spend part of the year in Tennessee and the other part feeding, mating and raising young in wetlands across North America.

Narrated by Oscar-nominated Michael Keaton, the film documents these birds in the wild, performing elaborate mating dances and rituals that strengthen the bonds between mated pairs, and includes slow-motion drone footage that follows the birds in flight.

But beyond the majesty of these species, the film brings into focus the threats facing their habitat.

Wetlands are critical to birds, but also people: They are home to more than half of all North American duck species; they ensure safe drinking water for 50 million people; their prairie grasses store vast amounts of carbon deep in their roots.

According to the Environmental Protection Agency, 22 states have now lost at least 50% of their original wetlands -- largely the result of human activity, such as development and agriculture.

"Wing Over Water" introduces viewers to the people working to protect these vital places, like National Audubon Society Chief Conservation Officer Marshall Johnson, for example, who will visit the aquarium the evening of Nov. 8 to discuss ongoing conservation efforts and lead a public screening of the film.

"It's really a spectacular film and has some rich educational resources," says Thom Benson, Tennessee Aquarium communications manager. "We're hoping teachers might consider adding this film to a field trip experience at the aquarium this fall."

Stoke your flame for learning more about feathered friends with these fast facts.

> Sandhill cranes are perhaps most famous for their courting dance. Before mating, pairs leap, bow, twirl and stretch their wings wide. If dance skills are deemed satisfactory, cranes mate for life.

> The distinct chuckling call of the sandhill is the product of its unique anatomy. The bird has windpipes so long that they coil in its sternum, helping contribute to its rich harmonics. 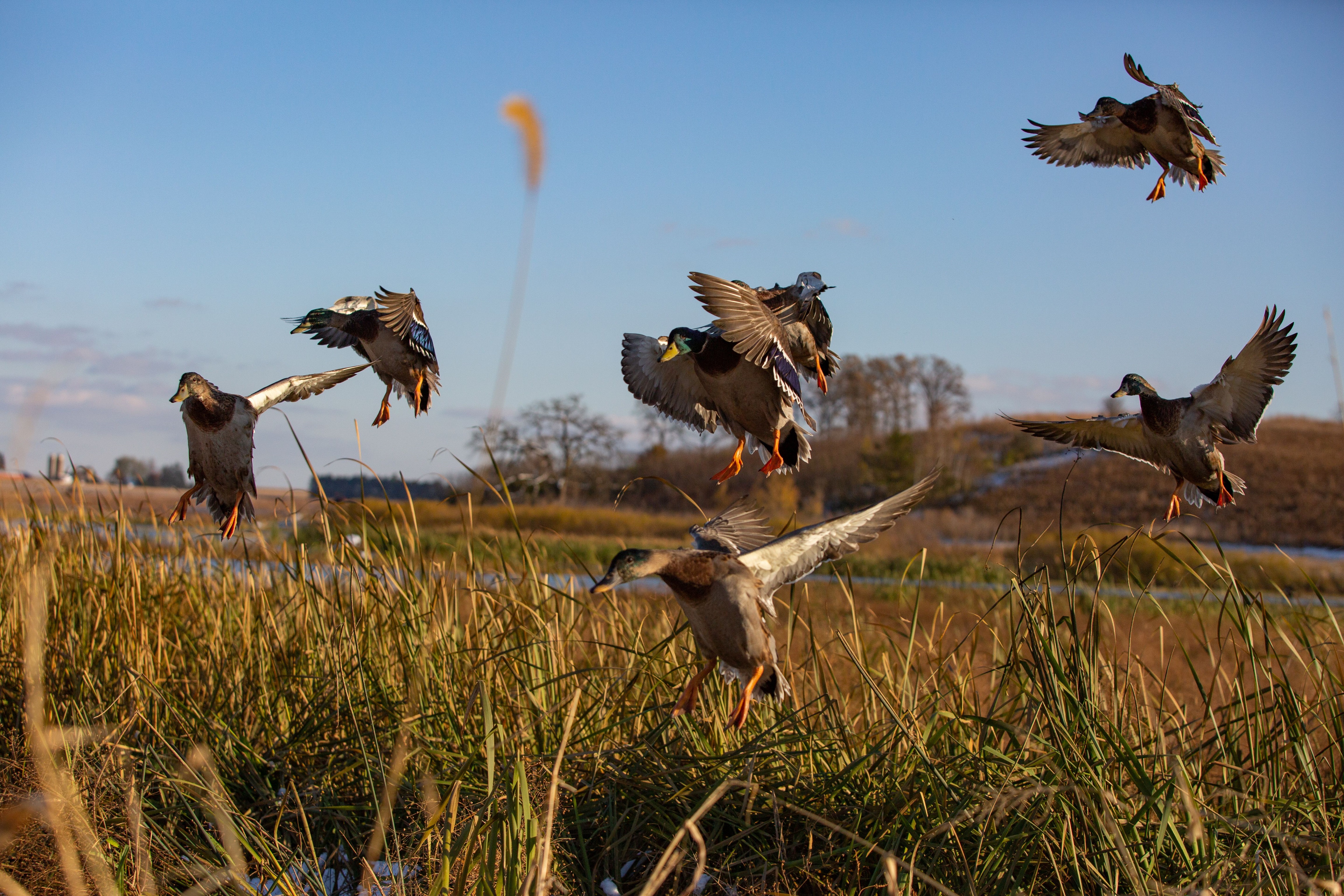 Photo contributed by Wings Over Water Film Crew / A group of mallard ducks lands amongst the tall grass in the prairie wetlands.

> Mallards are categorized as dabbling ducks, most easily identified through observation of "duck butt," which is when the bird submerges its head and neck, tipping only its tail out of the water to feed. (Diving ducks, on the other hand, feed by propelling their entire body underwater.)

> Highly recognizable with its bright green head and neck, the mallard is the most abundant and wide-ranging duck in North America, with an estimated population of 19 million breeding birds.

> The mallard is the ancestor of almost all domestic ducks, except the Muscovy. 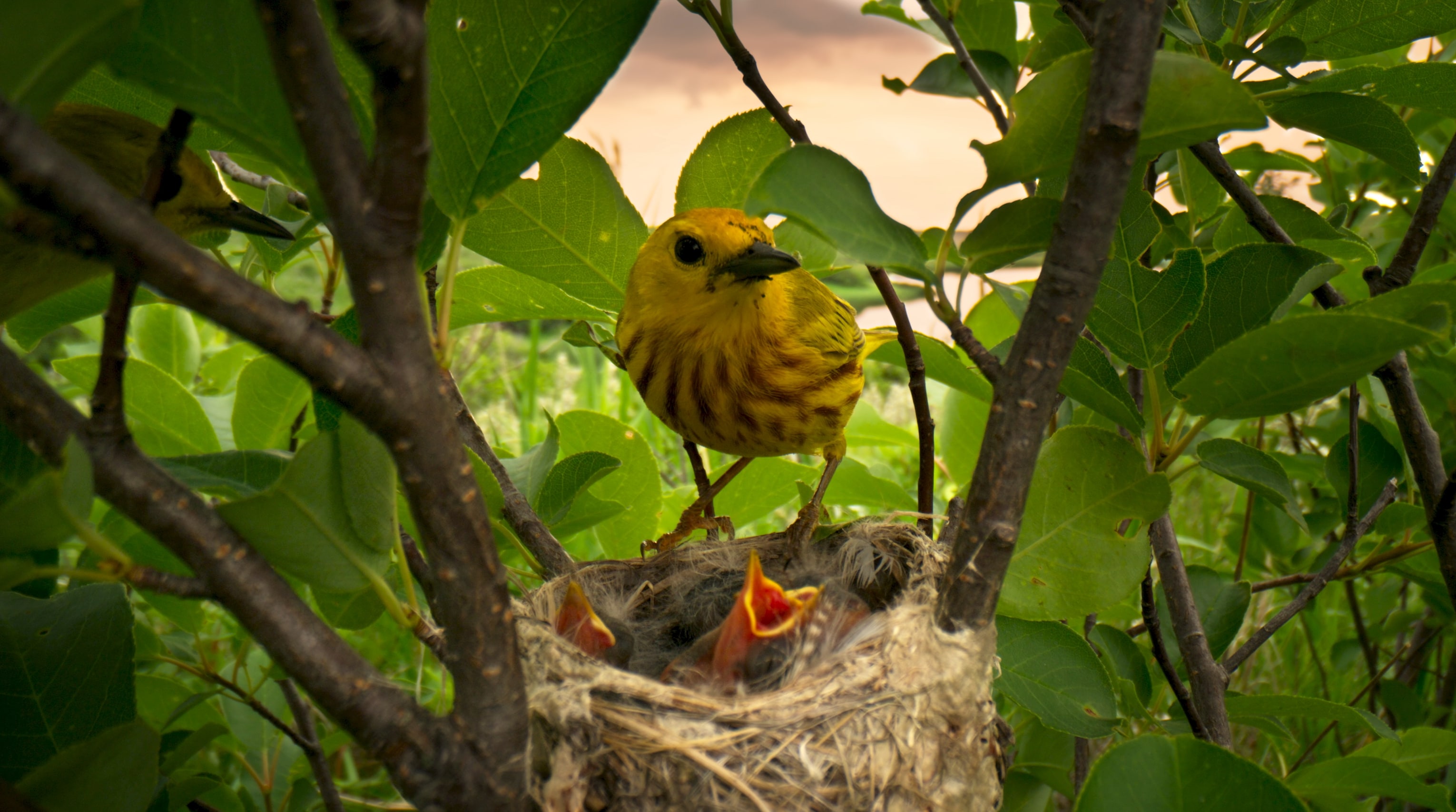 Photo contributed by Wings Over Water Film Crew / Yellow warbler parents care for their chicks in a nest on the edge of a pond in the prairie wetland region.

> The yellow warbler is the only warbler with yellow tail-spots, which can be helpful when attempting to distinguish one of North America's 53 different species of warbler.

> The most yellow of all the warblers, its color comes from a class of pigments called carotenoids, which it receives through diet.

> Brown-headed cowbirds, infamous for ditching their eggs in other species' nests, frequently parasitize yellow warbler nests. When they do, the warbler builds a new nest directly on top of the old one, sometimes resulting in a stack of up to six nests.

The annual Tennessee Sandhill Crane Festival is scheduled for Jan. 14-15. The festival takes place each year during peak sandhill migration and offers free shuttles from the Birchwood Community Center to the Hiwassee Refuge where knowledgeable volunteers with spotting scopes help visitors learn more about the species.