NASHVILLE — Supporters of President Joe Biden's sweeping Inflation Reduction Act predict the new law's $369 billion of environmental and tax provisions will dramatically speed the growth of renewable and clean energy efforts, promote independence from China when it comes to electric vehicle battery production, and help address climate change with carbon emission reductions of some 40% during the next decade.

"This absolutely is a game changer from our organization's perspective," said Stephen Smith, executive director of the Southern Alliance for Clean Energy, in a phone interview. "This is something we've been working on for 20 years. ... This injects more serious financial support into these technologies than any bill that has passed in the United States in relation to no-carbon or low-carbon technologies."

Critics, however, continue to question the massive spending bill's cost -- the overall measure clocks in at $750 billion -- as well as the inclusion of a 15% corporate minimum tax aimed at companies that earn more than $1 billion a year.

U.S. Sen. Bill Hagerty of Tennessee, who joined other Republicans in voting against the measure, told the Chattanooga Area Chamber of Commerce last month the bill is mislabeled and will, in fact, boost inflation with more government spending and higher taxes.

"This is not an inflation reduction act, this is an income reduction act," Hagerty said. "This is just a repackaging of the Green New Deal with many more taxes. 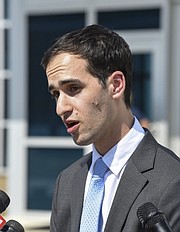 One of the Biden administration's policy goals in the law is promoting U.S. battery production and North American mining of minerals used to produce vehicle batteries. The aim is to reduce U.S. dependence on China, which dominates the battery market.

The new law seeks to do that by tying existing consumer tax credits for purchasing electric vehicles to those with North American-produced batteries and mineral content. The bill introduces two credits for new EVs, totaling up to $7,500 per car.

An additional credit of $3,750 applies if the EV's battery meets the North American mineral and production requirement.

Volkswagen Group of America, where production of the German auto manufacturer's electric-powered ID.4 SUV began in July at the company's Chattanooga assembly plant, is still assessing the law's impact. Volkswagen's EV batteries are to come from SK Innovation in Georgia.

"We expect Chattanooga-assembled ID.4s to be eligible for the full $7,500 tax credit (for purchasers) prior to the end of the year," Volkswagen said in a statement to the Chattanooga Times Free Press.

"In the short term, we think the Inflation Reduction Act could have a negative impact on EV adoption, but over time, the act's provisions can be beneficial for America's transition to electric vehicles and a clean energy future," Volkswagen said. "We also think that this will have a beneficial impact on auto sector employment in the North American Region.

"We remain in close contact with the (Biden) administration and will adapt to the new regulations as soon as we can in order to continue our mission to become an EV market leader in North America," Volkswagen stated.

And moving forward? Volkswagen said for 2023 and beyond, "We're seeking clarification if we satisfy the mineral content and battery assembly parts of the revised tax credit. We will inform our stakeholders as soon as we get the respective feedback."

While the company didn't elaborate, veteran auto industry executive John Bozzella, president and CEO of the Alliance for Automotive Innovation, recently did.

Bozzella cautioned that material, component and assembly requirements in the Clean Vehicle Credit will "immediately reduce" the number of qualifying electric vehicles available to consumers for purchase with the tax credit.

Bozzella said there are 72 EV models available for purchase in the U.S., a list that includes battery, plug-in hybrid and fuel cell electric vehicles. Seventy percent of those EVs have "immediately become ineligible," and none qualify for the full credit when additional sourcing requirements go into effect, Bozzella said.

Volkswagen's ID-4 was not on Bozzella's list of vehicles eligible for the tax credits.

"Only 2023 models in Tennessee qualify based on the list I have," Toprak said in a phone interview last week. "So I don't know if Volkswagen confirmed that or not, but that's on the list."

Incentives "are important for mass adoption" of EVs, Toprak said.

While the letter did not specifically mention electric vehicles, batteries and the tax incentives, Tennessee Chamber President and CEO Bradley Jackson said by phone that, too, is a concern.

"We've a lot of automotive manufacturers who are members, and what we kind of hear is they feel that with the section in that legislation, it actually probably limits the number of eligible EVs for the tax credit, actually drops it from about 72 to 22," Jackson said.

One of the world's biggest solar panel manufacturers should get a boost from the new Inflation Reduction Act at its plant in Dalton, Georgia. Scott Moskowitz, senior director and head of market strategy and public affairs for Qcells North America, said passage "means a lot" to the company, which is expanding its facility to produce up to 3.1 gigawatts of solar modules.

The final legislation's inclusion of Democratic U.S. Sen. Jon Ossoff of Georgia's Solar Manufacturing for America bill "will forever change the clean energy industry in the United States," Moskowitz said in an email.

"It will enable the creation of thousands of high-quality manufacturing jobs around the country, help lower energy prices and protect our environment," Moskowitz said. "We are already expanding our factory in Dalton and will soon employ more than 1,000 people there manufacturing 20,000 solar panels per day."

Moreover, Moskowitz added, "we intend to implement an additional multiphase, multibillion-dollar investment plan to bring additional steps of the solar manufacturing process to the United States."

Tennessee Valley Authority Chairman Bill Kilbride said the federally owned electric utility has a finance team poring over the more than 700-page law to assess how TVA might be able to take advantage of the new plan.

"It should offer us some benefits and opportunities, but we're still going through the legislation at this point," Kilgore told the Times Free Press.

"We're waiting to see what comes down with all of the federal appropriation dollars, but we are hoping that those dollars can be used in these programs," Herron said.

David Callis, executive vice president of the Tennessee Electric Cooperative Association, said co-ops in the state are "very pleased with the passage of this bill, as it includes issues for which we've advocated over the years."

The legislation provides funding for energy storage, which increases the value of renewable energy sources, Callis noted in an email in response to questions.

"The grant and loan funding provided by the legislation is particularly helpful for rural electric cooperatives," he said. "As nonprofits, all excess revenues -- and grants -- directly benefit our consumer-owners."

U.S. Sen. Marsha Blackburn, R-Tennessee, who voted against the bill, was critical of the measure during a recent appearance before the Chattanooga Regional Manufacturers Association.

"We're very hopeful for the work that VW, GM, Nissan and Ford are doing in Tennessee," Blackburn said. "We do know that we do not have a grid that would support a fully electric fleet. We continue to work to make sure that this will be commercially viable. But today, we need oil and gas."

In a tweet, Blackburn called the Democrat-backed law "a Trojan Horse for their socialist agenda."

According to the White House, the law should make it more affordable for Tennessee and Georgia families to purchase energy-efficient appliances, make repairs around their homes and save money on their monthly utility bills.

Among other things, the law provides rebates of 50% to 100% of the cost of installing new electric appliances, including "super-efficient" heat pumps, water heaters, clothes dryers, stoves and ovens. Millions of low- to moderate- income households are eligible for the rebates.

There are other rebates targeting household repairs and improvements in single-family and multifamily homes to boost energy efficiency. Another provision with no family income limits provides tax credits covering 30% of the costs to install solar panels and battery storage systems as well as make home improvements to reduce energy leakage or upgrade heating and cooling equipment.

Another tax credit covers 30% of the costs of community solar projects -- owned by local businesses that sign up families to save on their electric bills. It has additional bonus credits of 20% for projects at affordable housing properties and 10% for projects in low-income communities.

Other grants are directed to state and local governments to adopt the latest building energy codes, which the Biden administration says would save the average new homeowner in Tennessee 29% on their utility bills, or $719 annually.