A fool and his money soon part ways.

Is there any better way to frame Nebraska paying former Cornhusker quarterback Scott Frost $15 million to no longer coach its football team when it could have waited until October 1 and the buyout would have dipped to $7.5 million?

Either figure is pretty obscene given Frost's 16-31 overall record in four-plus seasons on the job. But handing him $7.5 million more than it would have been required to if it had only waited three more weeks is fiscally irresponsible bordering on criminal.

And don't tell me it all came from angry boosters, so it's not public money that could have been used for something far more important, such as improving educational opportunities for the vast majority of the roughly 26,000 students -- undergrad, grad and part-time -- on the Lincoln campus.

Sometimes image is everything, and the image of basically giving a football coach $7.5 million not to coach two more games -- after hosting Oklahoma this weekend, the Huskers are actually off on Sept. 24 before hosting Indiana on Oct. 1 -- would seem to scream of a university with its priorities completely out of whack.

Whether completely accurate or not, what kind of message does it send if you decide you need to raise tuition next year after not having a problem paying a football coach $7.5 million not to work for 20 more days? There's apparently plenty of money on hand to buy out an unpopular football coach at any price necessary. However, you're also so financially strapped when it comes to mundane stuff like balancing a budget for the university proper that you have to raise tuition on a lot of young people and their families who probably can't afford it.

At least that's the message a lot of people will take from this if Nebraska raises its tuition next year. A lot of parents' faces will turn as red as the Huskers' home jerseys. And given that perception, shouldn't somebody's head -- the school president, the athletic director, perhaps the chairman of the school's board of trustees -- roll over this?

Especially since all of this probably should have ended last season, after Frost went 3-9, which made his four-year record 15-29, not exactly a story of positive momentum.

Instead, Nebraska athletic director Trev Alberts -- who, in all fairness, didn't hire Frost -- gave him a mulligan after last season, hopeful this former national championship QB could, against all odds, return his alma mater to greatness.

So Alberts and Frost agreed on a plan to show both urgency and patience. Frost would be given a fifth season to turn things around, hopeful that his 5-21 record in one-score games over his first four seasons would begin to go the other way in a fifth. Conversely, Frost agreed to a $1 million pay cut, from $5 million to $4 million and to the slashed buyout of $15 mil to $7.5 mil on Oct. 1.

Then, of course, Nebraska blew a 28-17 lead against Northwestern in Ireland last month, that eventual 31-28 loss turning on Frost's ill-timed decision to attempt an onside kick that failed. Throw in this past Saturday's 45-42, lose-from-ahead home debacle to three-touchdown underdog Georgia Southern -- a loss the Cornhuskers paid the Eagles $1.423 million for the privilege to endure -- and Frost was fried.

Said Alberts of the $15 million golden parachute awarded his departing coach: "I know how disruptive these changes are, but we needed to inject something into this team to give them confidence and hopefully help them compete. Nothing would please me more than to see a pretty significant change and help this team get over the hump and win some games."

Nebraska currently stands 1-2 heading into Saturday's Oklahoma game. Assuming the Huskers lose that one -- and assuming any team will automatically win or lose a game this season seems a bit brazen when you look at Notre Dame's, Texas A&M's and Nebraska's lost weekends -- they'll fall to 1-3 with road trips to Iowa, Michigan, Purdue and Rutgers and a home game with Wisconsin yet to come. Given that, 5-7, or even 4-8 looks much more likely than 7-5 or 6-6.

The old timers may still look at Nebraska as a Top 10 program, one kissed by five national championships. But the new reality is that it's a state with very little local talent. It must recruit from afar and that has become increasingly difficult for all programs not named Alabama or Ohio State. 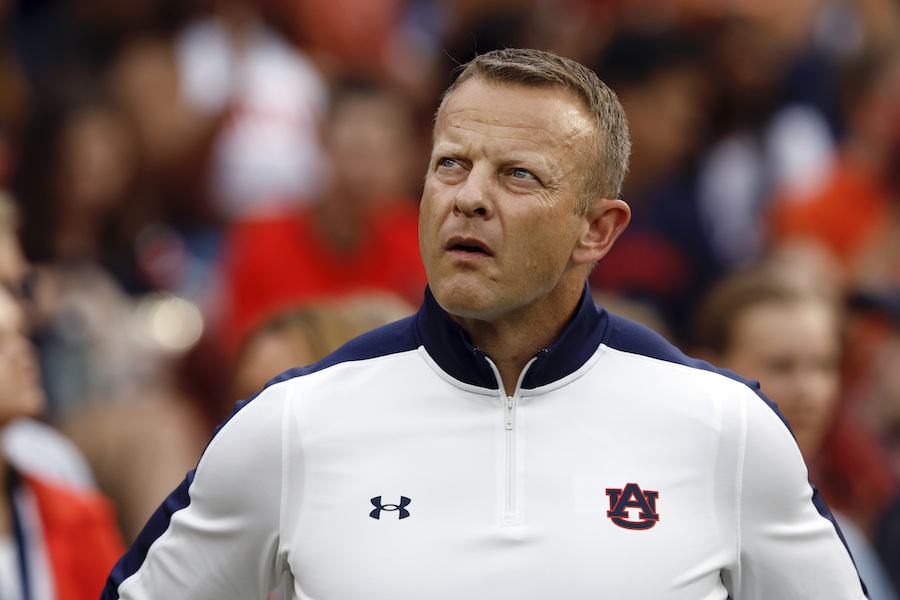 That said, the coach now on the hottest seat in America may be Auburn's Bryan Harsin, who's already lost the athletic director who hired him in Allen Greene, who resigned in August. Harsin was nearly forced out a year ago after one season. Unless Auburn can get to a New Year's bowl game this time around, he may be about to follow Frost to the unemployment office.

One other SEC coach who should probably not go making any big purchases this fall is Missouri's Eli Drinkwitz, whose Tigers, now in his third season as head coach, were crushed 40-12 by Kansas State. In fact, when Mizzou's Tigers face Auburn's Tigers on September 24th in Auburn, expect the loser to be the next target of college football's firing squad.

As Frost attempted to explain what happened in Saturday's loss to Georgia Southern, he may have also inadvertently explained what happened in the majority of the other 30 games he lost at Nebraska.

"We got beat on schemes," he said. "And I didn't really have an answer."

Then again, when you can get $7.5 million extra for apparently being too clueless for your employer to wait three more weeks to fire you, your own scheme just might be unbeatable.