Bradley County commissioners Monday voted down a change that some residents were concerned would make the panel's internal committee meetings less transparent.

On the agenda Monday was a proposed resolution changing language under Rule 8 that Dan Rawls, a county resident and former county commissioner, called "kind of unbelievable," contending it dimmed the transparency the May resolution had provided.

Rawls told commissioners the proposed change tears down what was accomplished in May and makes the meeting location a matter of convenience for government officials rather than taxpayers who foot the bill. 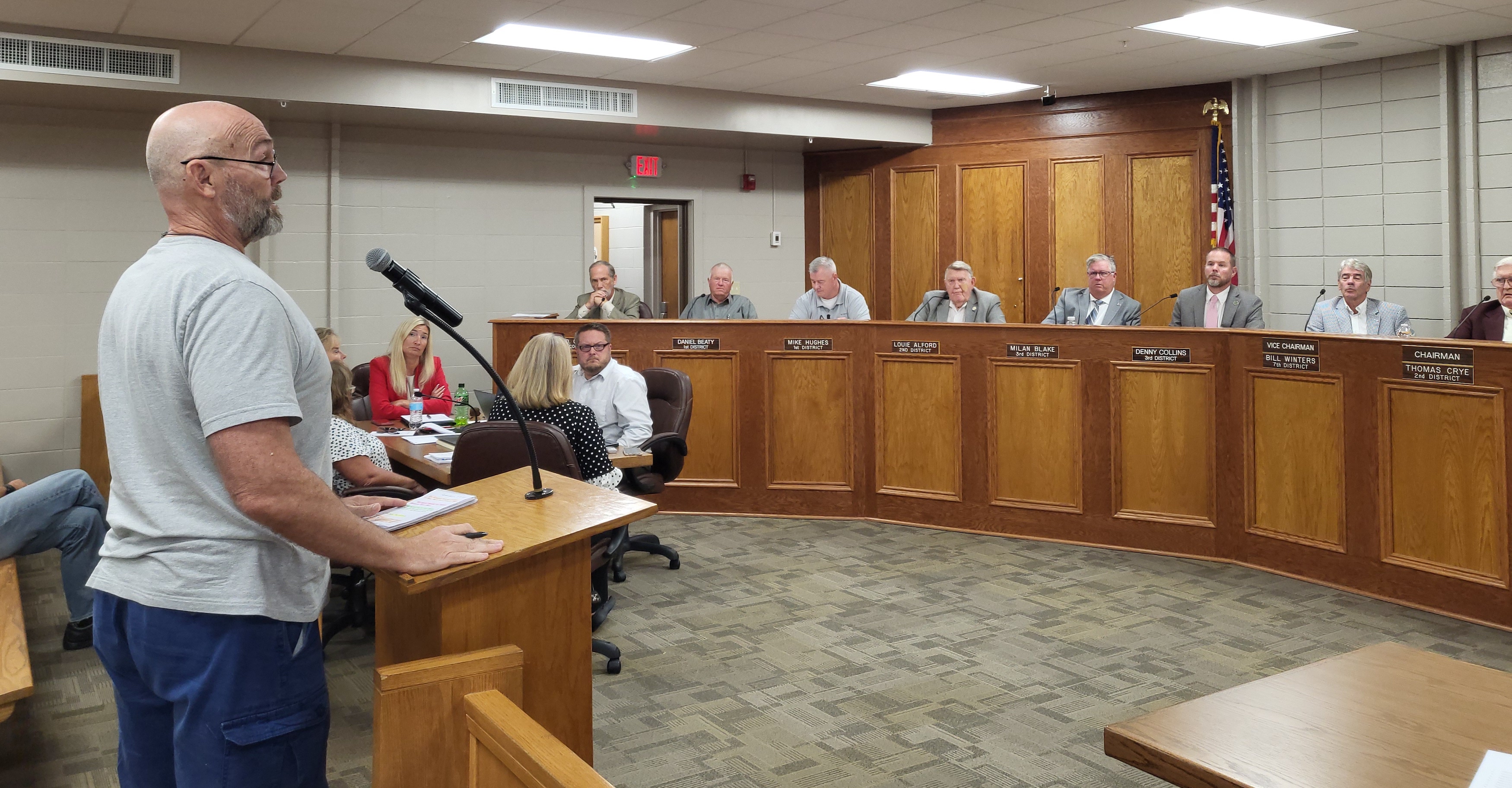 Staff photo by Ben Benton / Local resident Dan Rawls speaks to the Bradley County Commission on Monday prior to a vote in which commissioners rejected a proposed change to committee meeting rules that some residents said reduced government transparency.

Rawls and commissioners agreed some meetings about county property or issues such as the road department or county jail require an on-site meeting so commissioners can see what they're making decisions about.

But the idea of the May resolution, Rawls said, was to keep most committee meetings at the commission's courthouse chambers, where they can be recorded and livestreamed to county residents.

"Just back in May, we amended Rule 8, and that amending of Rule 8 actually increased the transparency within the commission, within the committee system, which would make those committees available to the taxpayers via the internet and via the system we use to televise these meetings," Rawls said, referring to Monday's commission meeting at the Bradley County Courthouse as an example.

Livestreamed meetings, he said, have been a major improvement for county residents whose schedules or mobility don't allow them to attend. Taxpayers paid for the technology after all, he said.

"The motion you have before you today to amend -- that motion decreases transparency clearly and without a doubt," Rawls said.

He said the proposal was confusing and it allowed meeting locations to be moved without explanation.

Rawls' remarks were echoed by residents Debra Gleason, Jessica Hedgecock and Tracy Dickerson, who told commissioners the move has the appearance of removing transparency, and they applauded the positive effect that making meetings available through technology has had on local government and the public's understanding of issues.

Gleason said the proposed resolution eroded transparency and public trust. Hedgecock agreed and said it was simpler for meetings to stay at the courthouse and to be able to watch them online when she can't go.

The May resolution hasn't even been used yet it's so new, Rawls said.

"It's a slap in the taxpayers' face to come forward and allow somebody who's paid by the government with taxpayer money to change a system that reduces the transparency for those paying the bills," Rawls said.

Commissioner Howard Thompson, who made the motion that brought the proposed resolution to a vote, said anyone who has an issue that would fall under an internal committee should plan to attend the meeting wherever it's held.

As commissioners discussed and compared the standing resolution on Rule 8 and the proposed one, they seemed confused by what the proposal was supposed to accomplish.

Finally, the 13 commissioners present -- Commissioner Scott Gilbert was absent -- voted down the proposal 12-1, leaving Rule 8 where it stood in May. Before the 12-1 vote was confirmed, the question was asked if anyone wanted to change their vote.

Commission Chairman Thomas Crye and other commissioners said it's important for residents to know all commission and committee meetings are open to the public no matter where they're being held.