With the passing of Queen Elizabeth II, I remember when my daughter first heard the queen speak on the radio. "Wow! I never heard English spoken so beautifully. Who is that?" I smiled because I'd grown up trying to imitate the "Queen's English" as a youngster in the British colony of Bermuda.

I was doubly saddened by the queen's passing because it came just days before my birthday. How does one celebrate life and death at the same time? My first instinct was to ignore my birthday. Who wants to celebrate getting older anyway? So I vacillated between mourning and sulking.

But then I started to reminisce about when the Queen visited Bermuda and how the American and British military base operated side-by-side on the island. I remember how my own mother looked like Queen Elizabeth's twin sister. And that mom bought me a Princess Anne dress so that I could pretend I was just like the Queen's daughter. Memories are a true blessing. I was tempted to laugh out loud, but gave a polite British giggle instead.

Yes, I know that British royalty can be extremely controversial. The British empire created colonies across the globe, canceling cultures, and leading the slave trade. Recent switching to looser aligned "Commonwealths" from colonies did not appease lots of former colonists.

Queen Elizabeth II mourned at funeral by Britain and world 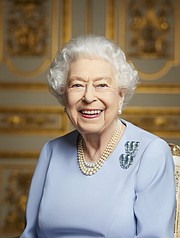 Could there be a major commonwealth exodus under King Charles III? He's dismissed by many with his wife being even more disliked. And there's no soft-spoken queen to bridge the antipathy and mute the multiple royal scandals.

The future will be "interesting:" un-canceling cultures for some, loss for others, and disruptive for most, including us. Consider the potential economic chaos around the world of a Commonwealth breakup. Imagine Brexit on steroids, especially when you throw in the impact of Russia's war against Ukraine. Small nations already suffering will be in calamity mode.

While the USA would no doubt be affected, especially with supply chains, we have proven our resilience during COVID-19 and should be OK. This country is made up of folks who persevere and overcome. I smile remembering my parents who were first generation American born. They were dedicated to the American Dream: rising from colonial history, making a difference, and maximizing opportunities for themselves and others. While part of me misses speaking like a queen, I appreciate the distance from the colonial empire and commonwealths.

Today, that distance is minimal and it's not due just to technology. We all struggle to survive the economic issues straining us, the anger threatening to overwhelm us, and the massive political changes driving us into the Down Under.

What to do? We definitely need to come together, even as we're breaking apart. To do that, every humanity-based effort is ever more necessary. Every small act of kindness helps heal the wounds that have been inflicted upon us whether by COVID, politics, economics, or colonial-based history. For the energy and will to do that, we must embrace every moment that celebrates life, especially when it seems more fleeting than ever.

That brings me to my birthday. I knew intellectually that it celebrated another year of life and every act of kindness that I've done and others have done for me. But my loved ones had to work super hard to bring me out of my funk about the Queen's death and possible world chaos.

Maybe the moral of this tale is that it's hard work, but helping others makes life worthwhile. So Cheers! Let's get on with the work that gives life to our lives.

Contact Deborah Levine, an author, trainer/coach and editor of the American Diversity Report, at deborah@diversityreport.com.