The United States will limp into the World Cup, and not just because of all the Americans' injuries.

The U.S. played a 0-0 draw against Saudi Arabia on Tuesday night at Murcia, Spain, that was somewhere between unimpressive and alarming.

After managing no shots on goal in Friday's 2-0 loss to No. 24 Japan, the U.S. got just two against the 53rd-ranked Saudis in the Americans' final tuneup match. Among its last seven games against World Cup-bound nations, the U.S. has one win, three losses and three draws, getting shut out six times.

“We’re playing tentative,” said U.S. coach Gregg Berhalter, who plans to announce his 26-man World Cup roster on Nov. 9. “It’s nervy times. People are worried about being on the roster or not, and it’s a difficult moment.”

The two results will do little to quiet criticism of Berhalter, who left Jordan Pefok, John Brooks and Tim Ream off this roster.

Forwards Ricardo Pepi, Jesús Ferreira and Josh Sargent combined for five touches in the opponents' penalty area during the two matches, according to Opta.

“We had a better performance than last game,” Pepi said. “We all have to go back to our clubs, take care of our own business, and we'll all be ready.”

Oft-injured Gio Reyna came off in the 30th minute because of muscle tightness. Christian Pulisic was among four changes, returning to the depleted U.S. lineup after missing Friday with an unspecified injury.

Pepi had a team-low 13 touches and no shots before Ferreira replaced him in the 59th minute.

“It was tough for Ricardo. He didn’t get much service. He didn't get many chances,” Berhalter said. “So it’s really hard to evaluate players when they’re not getting opportunities.”

After missing the 2018 tournament, the U.S. has rebuilt with among the world’s youngest rosters in 56 matches under Berhalter. The Americans open against No. 19 Wales on Nov. 21, face fifth-ranked England on Black Friday and play No. 22 Iran on Nov. 29 in the toughest of the eight groups by ranking. 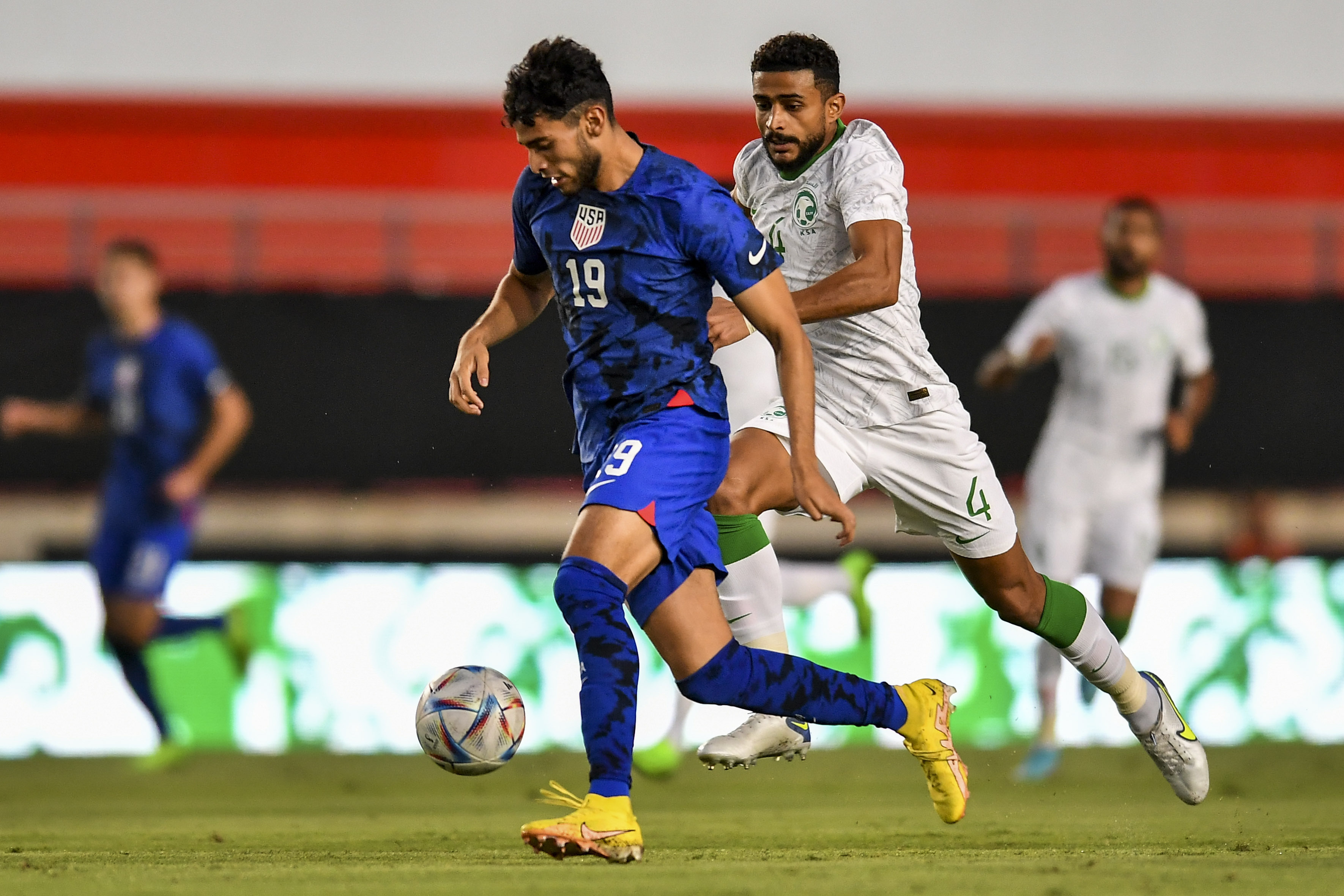 The U.S. was without Tim Weah, Yunus Musah, Chris Richards, Antonee Robinson and Zack Steffen due to injuries, and Miles Robinson will miss the World Cup because of a torn Achilles tendon. Because the Cup has been jammed into the middle of the European season by FIFA to avoid Qatar’s summer heat, players have club matches through Nov. 13 and more injuries are possible.

Reyna, the 19-year-old son of former U.S. captain Claudio Reyna, is a constant health concern. His 2021-22 season was wrecked by leg ailments, and Borussia Dortmund has limited his playing time this season to 247 minutes.

DeAndre Yedlin started at right back, Sergiño Dest moved to the left, Kellyn Acosta replaced Luca de la Torre in midfield and Pulisic took over from Brenden Aaronson on the left flank.

Yedlin limped off in the 59th minute after Saud Abdulhamid’s lunging tackle and was replaced by Joe Scally.

Pulisic and Weston McKennie played until the 75th, when Aaronson entered in central midfield and Malik Tillman took over a flank.

There were just 364 fans in Estadio Nueva Condomina, which has a capacity of about 31,000, and teammates could be heard shouting instructions. A spectator ran onto the field during the first half and approached Dest before being stopped by security.

Wearing its new blue tie-dye style uniforms, the U.S. was tested just 24 seconds in. Matt Turner dived to his left to save a long-range shot by Sultan Al-Ghannam. Turner made a fine block on Haitham Asiri’s point-blank shot in the 70th minute after second-half sub Mark McKenzie was stripped of the ball. 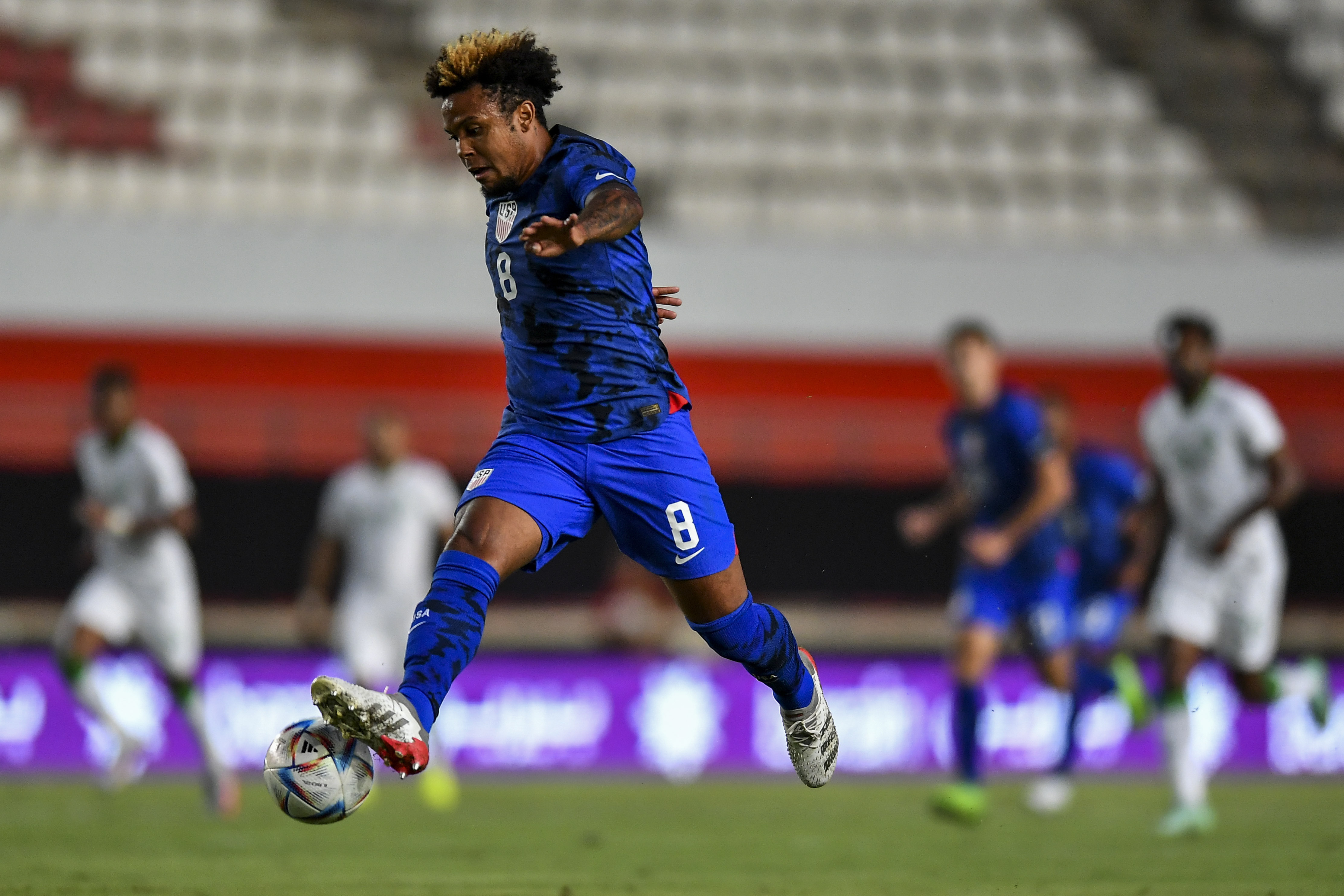