There's a job interview, and then there's what Victoria Capdevielle put in front of Jessica Revels six years ago at Bread & Butter.

"Jessica was one of the first people who applied and the first to interview," says Capdevielle, who shares ownership of the Dayton Boulevard bakery with Alex Whitman. "We did a little 'Great British Bake Off' sort of thing -- we gave her a recipe with very bare instructions."

Revels recalls the charge -- a batch of chocolate chip/walnut cookies. She admits getting off to a bit of a slow start, but had more than enough game.

"I stumbled a little finding the ingredients," she says. "I was a young kid, trying for a new job in a new bakery, but I'd been in bakeries for eight years (prior). I knew what I was doing."

In fact, Capdevielle says Revels was her first hire in November 2016. Revels started out as the pastry chef, but succeeded Whitman as kitchen manager three years later.

"We're open seven days a week, and there's someone in the kitchen every day from about 5 a.m. to 8:30 p.m.," Revels says. "When we opened the doors, it was Alex and Victoria plus three of us. Now we have about 30," about evenly divided between kitchen and retail staff.

It's a long way from Bread & Butter's beginning, which Capdevielle recalls was in the kitchen of the Chattanooga home she shared with Whitman, her "life and business partner."

"We met in Chattanooga," she says. "I was born in Argentina to French parents, and moved to the U.S. in 1991. I came to Chattanooga because the (cost of living) was affordable and the outdoors is at your finger tips.

"Alex is an adventurer," she adds. "He started traveling after high school and went to Europe, Russia and China. He came here from Colorado."

"Then we'd take it to the farmers market and sell it all in 30 minutes," she says.

Capdevielle says she and Whitman decided going bigger in their home kitchen wasn't an option. She says they looked around, found an affordable location in Red Bank and got help from Whitman's family building out a kitchen.

"Now we can do 100ish loaves a day, with the ability to flex up to about 200 if we have enough notice," she says, adding that the sourdough bread is the bakery's top sellers. Its croissants and cinnamon rolls come right behind, Revels adds.

Capdevielle says Bread & Butter "got a lot of traction" right away, in its first year of operations, and has a solid customer-retention rate.

"We're very much about a handmade product and working with local farmers," she says. Revels adds that, during the global pandemic, those local farmers supplied more than what she and her staff needed to bake.

"We started leaning more toward veggies from those farmers," she says. "We leaned into things like pasta and other staples, whatever we could. We'd have only one customer in a a time. We did curbisde. 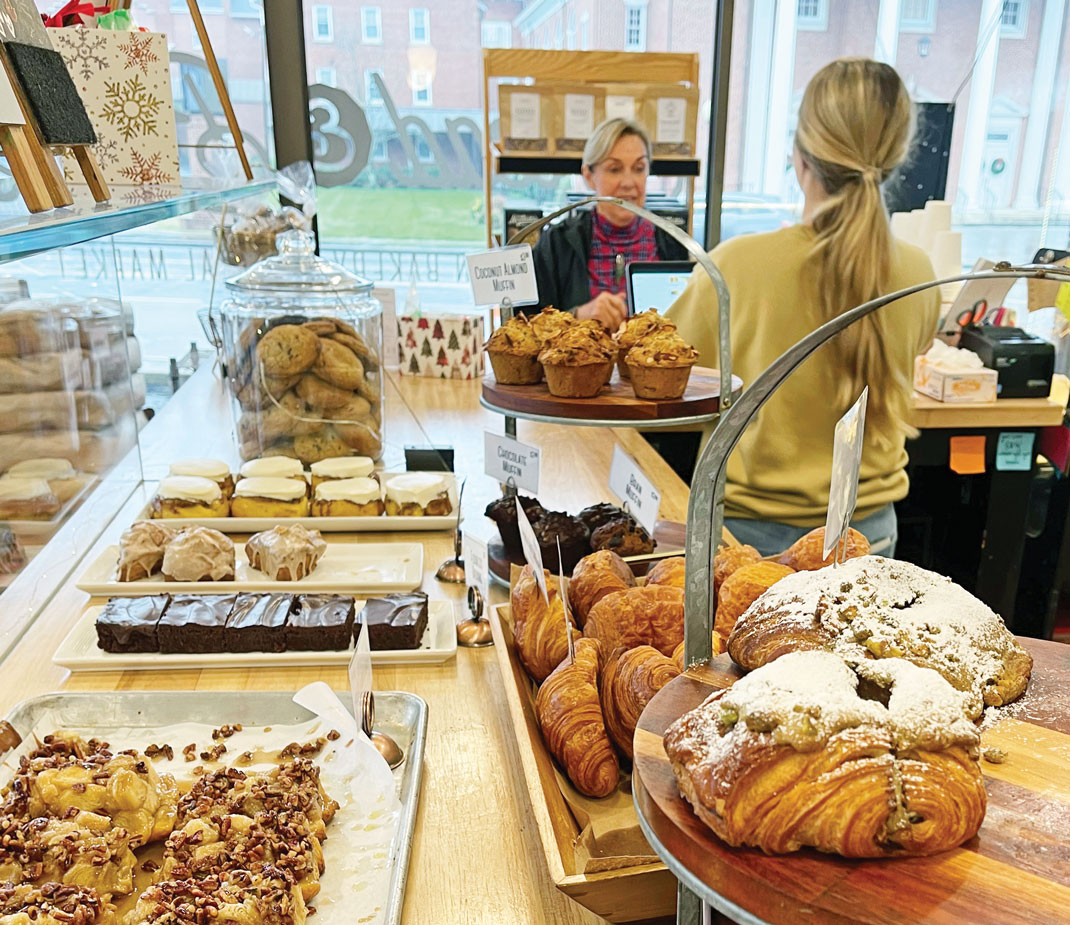 Photography by Jennifer McNally / Samantha Gronholm completes an order for a customer at Bread & Butter Bakery.