Wade Hinton grew up on Chattanooga's Westside raised by his single mother and a host of friends and supporters.

From that experience, Hinton says he learned the value of community and gained the support, education and encouragement to go on to law school and eventually to become the first persons of color to be the city attorney in Chattanooga and one of only a few Black Chattanoogans to have senior management roles at different major corporations in Chattanooga.

"We didn't have much growing up -- I received free lunch my entire time in public schools," Hinton recalls. "But that never stopped my mom from making sure we served others, be it delivering goods to the elders or doing laundry for others in the neighborhood."

Hinton recognizes that most low-income Chattanoogans, especially minority children, haven't enjoyed the opportunities and success that he has had. But Hinton is eager to make sure that more people are included in Chattanooga's growing economy and realize more of the American dream.

At age 47, Hinton left his job as a vice president at Unum in 2020 to try to become the first Black mayor of Chattanooga. In a crowded 15-person field, Hinton finished third, capturing 6,108 votes, or 22% of the ballots cast, to finish behind Tim Kelly and Kim White, who ran again in a runoff race in March 2021.

Hinton says he didn't take much time looking back on his unsuccessful mayoral campaign. The Chattanooga lawyer quickly moved ahead after the campaign to form his own consulting and advisory company, taking his legal, corporate and government experiences and passion for promoting equality to create Hinton & Co.

Hinton's company work with dozens of businesses to help assess, promote and implement diversity, equity and inclusion programs in their business with seminars, advice, and a variety of services to aid organizations trying to build more inclusive staffs.

"Throughout my career -- in both the public and private sectors -- I have been dedicated to creating a more inclusive community by amplifying the voices of those who haven't been heard and creating more seats at the table," Hinton says.

During Hinton's tenure with Unum as its first chief inclusion and diversity officer, the Chattanooga-based insurance giant received a number of awards and made its first appearance on Forbes Magazine's list of Best Employers for Diversity.

Hinton insists that diversity, equity and inclusion are more than just hiring a diverse workforce, as important and challenging as that is.

"Having diversity alone is not enough because you can have someone who is at the table but isn't able to raise his or her hand to give their ideas," Hinton says. "That inclusion part is key and something that organizations need to work on. Diversity needs to be more than just an object or just trying to get the numbers to solve the diversity issue."

Among the dozens of companies and organizations that Hinton has consulted with is CBL Properties Inc. in Chattanooga. Stephen Lebovitz, CEO of the Chattanooga shopping center company started by his father, said CBL has been working with Hinton's company to improve its diversity and inclusive practices, "and we're really excited about what we have been able to accomplish and some of the opportunities we have ahead of us."

Lebovitz said the people and culture of any organization are key to its success and having a varied and diverse pool of talent as fully involved as possible helps to improve the staff and their work.

"I think this is smart business," Lebovitz says.

Working with the Urban League of Greater Chattanooga where Hinton was the charter president for the Urban League Young Professionals, Hinton has launched a pioneering effort to help assess the diversity and inclusion efforts for the entire community. Hinton and the Urban League solicited and received responses from more than 50 major area employers about their workforce makeup and practices from which Hinton is assessing and preparing the first Community Cultural Index report scheduled to be made public in February, 2023.

The Chattanooga Urban League was selected by the Federal Reserve Bank of Philadelphia to be included this year in a "Reinventing Our Communities" study on how cities are building an equitable workforce recovery. During the yearlong program, 11 communities from across the country will engage in racial equity and workforce training, peer learning, and personalized coaching and advising, leading to the development of local workforce equity plans.

"This is just the right next step for us to take a look at the community holistically and see where we, as a community, actually are," Johnon says. "At some point, we're considering putting out a scorecard for businesses from this index."

The Community Culture Index will be one of the first data-driven efforts of its kind for an entire city and could be a model for other cities around the country.

"What we measure, we manage," Hinton says. "Many employers may see their own DEI (diversity, equity and inclusion) efforts as an acceptable status quo, but they may still be unsure to what degree their peers and competitors are doing more or a lack a high-level understanding of how they can make progress. This index will address those questions while orienting our entire business community in a healthier, stronger, more inclusive direction."

Hinton said he wasn't always sure that Chattanooga was the kind of inclusive community where he wanted to live. After graduating from Chattanooga School for Arts and Sciences and going to Atlanta to study music at Emory University, Hinton thought at the time he could find more opportunities in another community and thought he wouldn't return to his hometown. While arranging musical events at Emory and developing a passion for philosophy and law, Hinton decided to pursue a legal education at the Univerity of Memphis which rekindled a desire to return to Tennessee and ultimately back to Chattanooga.

"As much as I felt at home in the Westside, I didn't think there was a place for me here in Chattanooga.," Hinton recalls. "And I wasn't alone. Even with the remarkable transformation taking place in Chattanooga, many of us didn't feel like we were a part of the story. In the boardrooms and executive suites where decisions were being made about our great city's future, there were few people who looked like me. The leadership of our city did not reflect the great diversity of its citizens."

When he returned to his hometown after earning his law degree in Memphis, Hinton became the first Black attorney at Schumaker and Thompson and after serving at the law firm of Miller & Martin and later helping Volkswagen get started in Chattanooga as its deputy counsel, Hinton was named by then-mayor Andy Berke as the first person of color to serve as city attorney for the city of Chattanooga. Hinton served under Mayor Berke for five years where he helped push for greater diversity in city government and its agencies, creating the Board Connector to help identify a more diverse population of leaders to serve on key government, nonprofit and business boards.

That effort to help diversity leadership then led Hinton to America's biggest disability insurer, Unum, where Hinton served as vice president of diversity, equity and inclusion. DiversityFirst named Hinton one of its Top 100 Diversity Officers.

In the aftermath of George Floyd's death at the hands of the Minneapolis police in 2020, businesses and communities around the country pledged to do more to promote racial equity and inclusion. Hinton said he hopes to build on the city's vaulted "Chattanooga way" of collaborative, communitywide involvement to help assess how local organizations and leaders are doing to promote more equity among diverse elements of society.

As many employers struggle to find enough talent to fill all of their staffing needs in Chattanooga with unemployment near historic lows, Hinton said diversifying the talent pool and cultivating an inclusive culture is more critical than ever to attracting and retaining workers.

"It's expensive when you lose talent, and communities that are more inclusive are going to do better," Hinton says. "We're only as strong as our team, and culture is important, and we want and need everyone to feel like they belong and are included."

* Job: Founder and CEO of Hinton & Co., a diversity, equity, and inclusion consulting firm in Chattanooga.

* Education: Hinton grew up on the Westside of Chattanooga and graduated from Chattanooga School for Arts and Sciences, Emory University in Atlanta and the University of Memphis Law School.

* Career: After earning his law degree, Hinton joined the Chattanooga law firm of Shumacker & Thompson and later worked at Miller & Martin before joining Volkswagen of America in 2009 as deputy general counsel, serving as Chattanooga’s city attorney from 2013 to 2018, working as vice president of diversity, inclusion and equity (DEI) at Uum from 2018 to 2020, and running for Chattanooga mayor in 2021 before forming Hinton and Co. in July 2021.

* Recognitions and civic involvement: Hinton was named one of the 40 best advocates and business leaders under the age of 40 by the National Bar Association and the Network Journal. He was a member of Harvard’s 2015 Young American Leaders Program and was a 2017 Presidential Leadership Scholar and a 2018 Diversity Community Champion for Justice. Hinton also was a recipient of the German Marshall Fellowship and he founded the Board Connector, which works to encourage more diversity on Chattanooga nonprofit boards.

* Personal: Hinton and his wife, Jana, are parents of a daughter and live in Chattanooga. 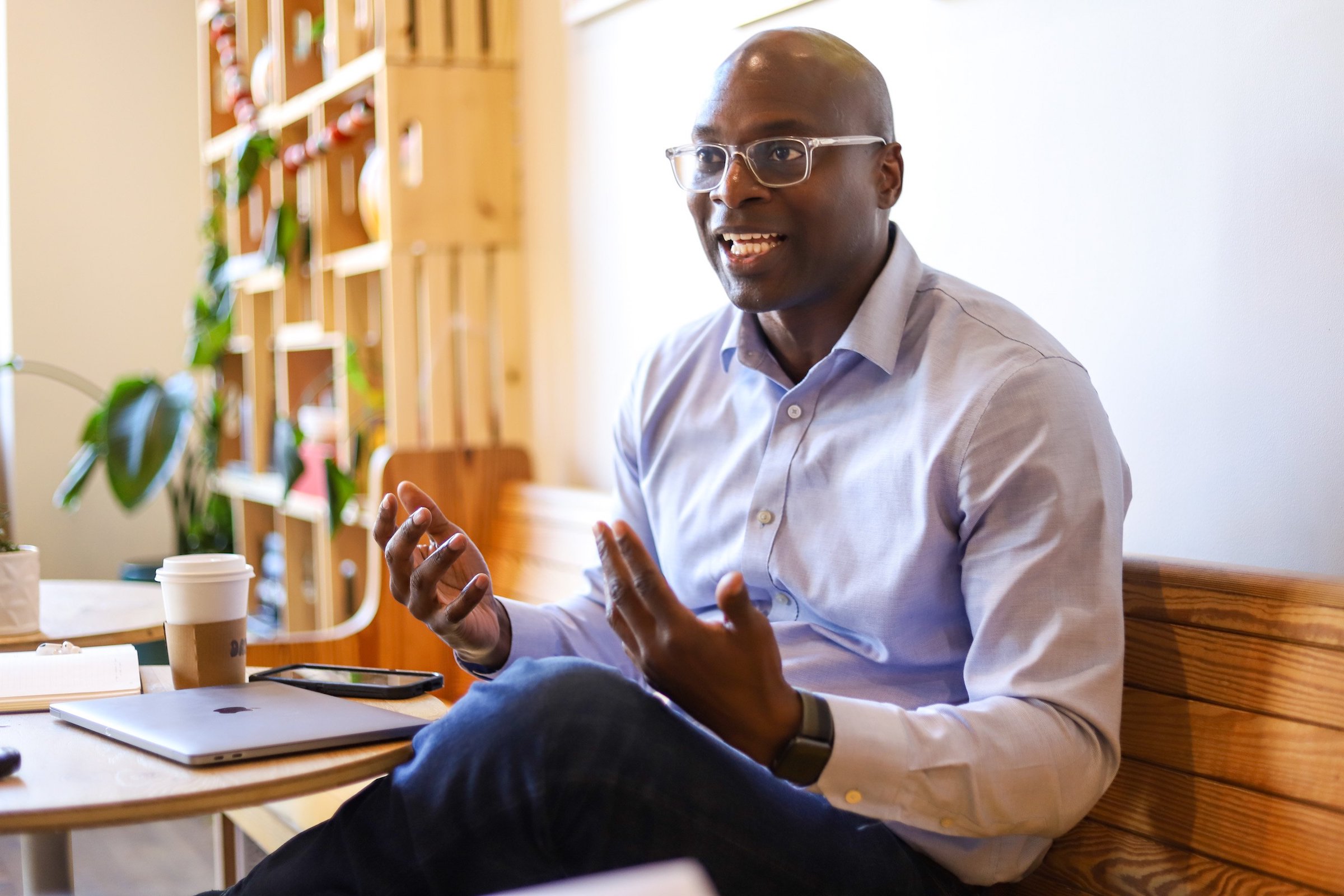 Staff photo by Olivia Ross / Wade Hinton speaks during an interview at The Bode Hotel on Wednesday, November 9, 2022. 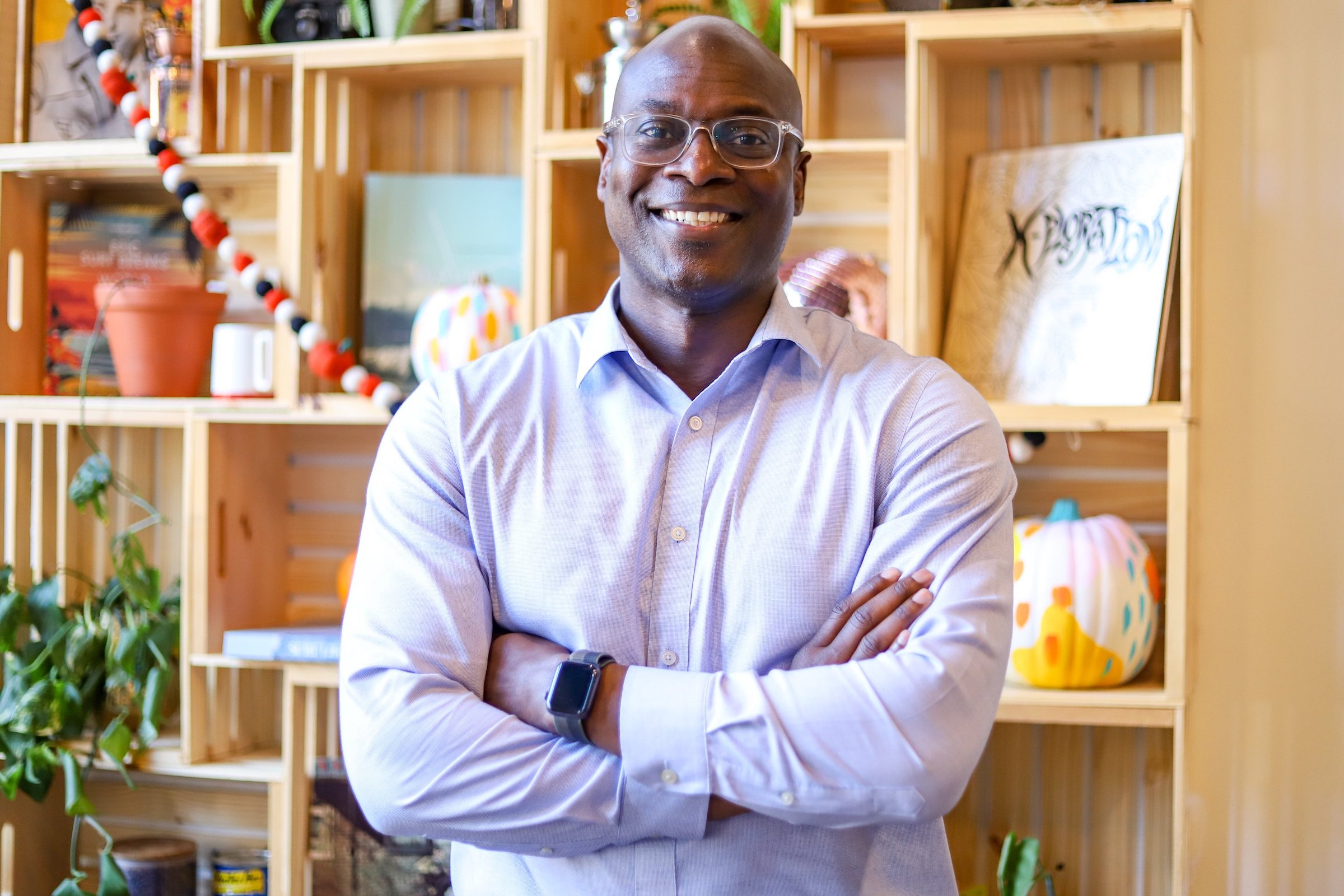 Staff photo by Olivia Ross / Wade Hinton poses for a photo at The Bode Hotel on Wednesday, November 9, 2022. 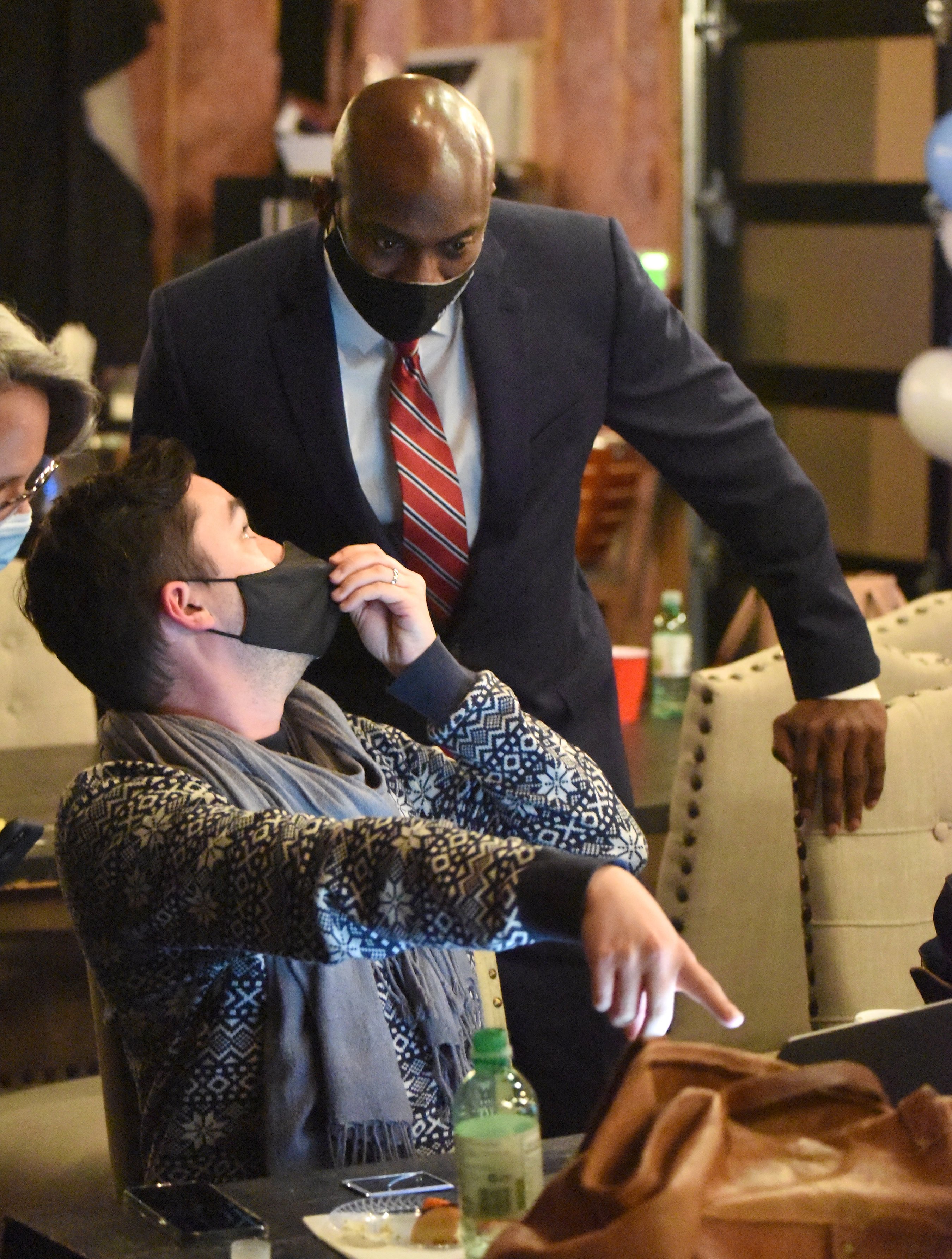 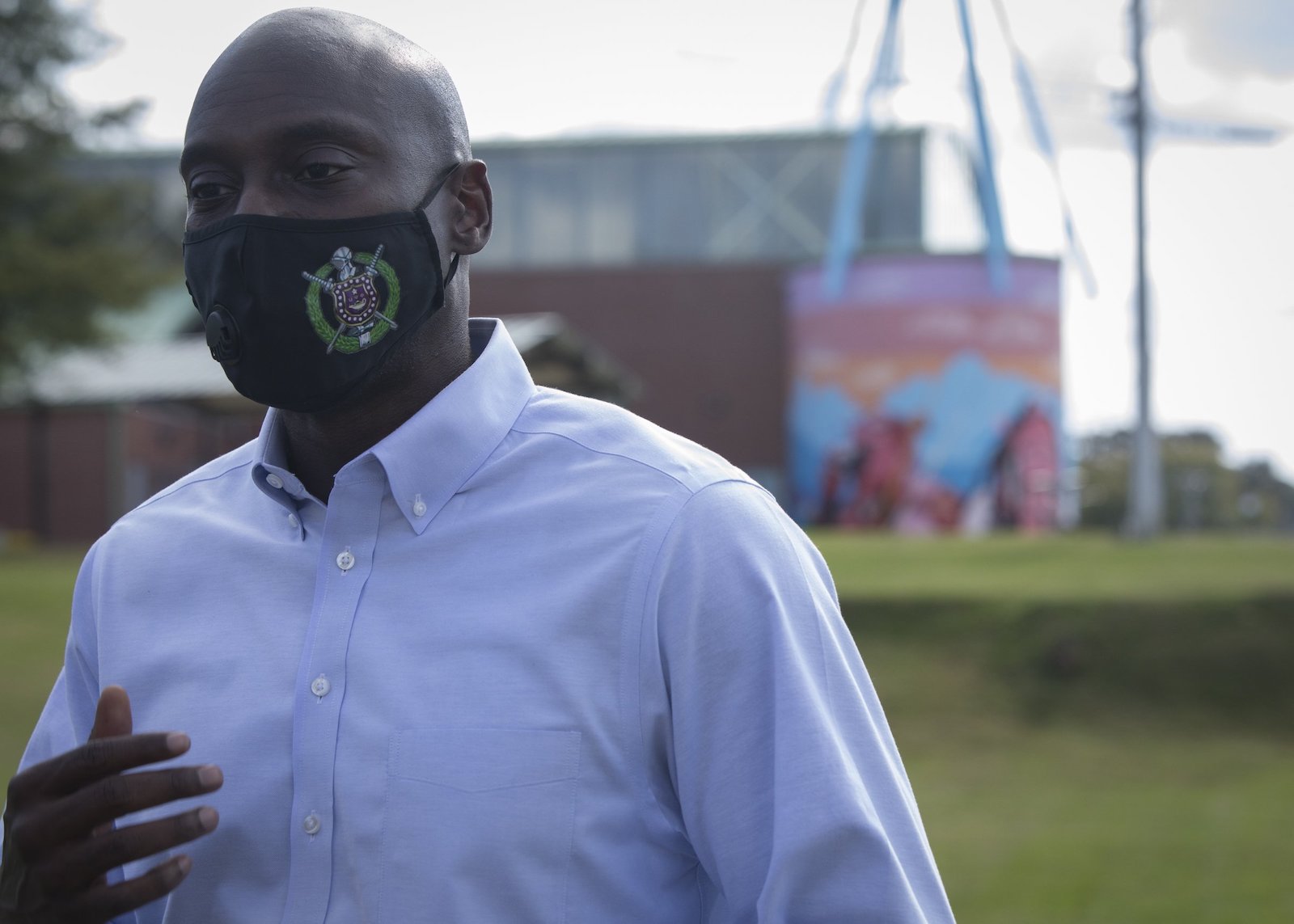 Staff photo by Troy Stolt / Chattanooga Mayoral candidate Wade Hinton is seen outside of the Brainerd Rec Center during Vote with us bus tour event in October 2020 in Brainerd.