KNOXVILLE — The sad irony of Tennessee's offensive struggles in an inexplicable seven-point home loss to a Kentucky team that came in reeling was that it also happened on the day the program retired the jersey of its most prolific outside shooter.

Even in his orange plaid button-down shirt and jeans — and likely without needing much of a warmup — Chris Lofton, the Kentucky native who played for Tennessee from 2004-08, could've outshot the current Volunteers who took the court and fell flat Saturday afternoon at Thompson-Boling Arena.

During a halftime ceremony, Lofton, who connected on 431 career 3-pointers, became only the fifth Tennessee men's basketball player to have his jersey raised to the rafters, joining Allan Houston, Dale Ellis, Bernard King and Ernie Grunfeld.

Even NBA megastar Kevin Durant, whom Lofton once famously drilled a game-winning 3 over during a Texas-Tennessee matchup, took note, posting "Congrats to Chris Lofton, got his jersey retired at the University of Tennessee...one of the best competitors I've been on the court with. Respect #5" on Twitter. 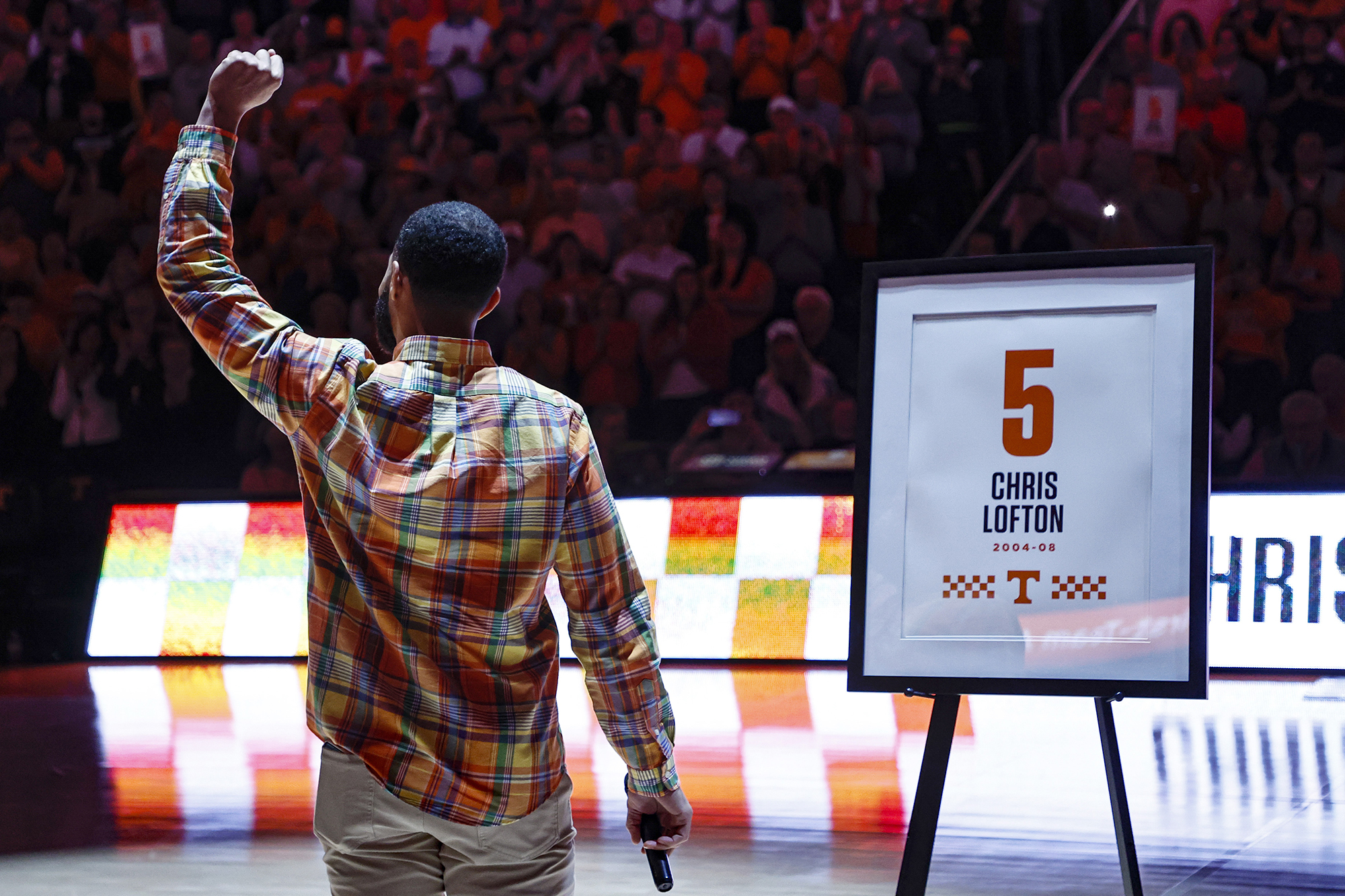 AP photo by Wade Payne / Former University of Tennessee basketball player Chris Lofton acknowledges fans at a halftime ceremony during the Vols' game against Kentucky on Saturday in Knoxville. Tennessee retired the No. 5 jersey of Lofton, who played for the Vols from 2004-08 and set the program record by making 431 3-pointers.

Despite opening the game on an 8-0 run, by halftime the Vols had shot a pedestrian 2-of-9 from 3-point range to not only trail the Wildcats, but allow a team that came into the matchup just 1-3 in the Southeastern Conference to gain the type of confidence that would carry it into the second half. Kentucky rode that to a 63-56 win that ended the Vols' 25-game streak of home wins.

"Our guard play wasn't what we know it needs to be," said Vols coach Rick Barnes, who was too hoarse after yelling during the game to speak above a gravelly whisper afterward. "We've got to have better overall play from our guards and perimeter.

"We still have too many guys who think offense and not their role."

Against a Wildcats defense designed to prevent Tennessee's backcourt from finding open shots, the Vols — who had made nearly 35% of their 3-point attempts this season before Saturday — never found any rhythm beyond senior post Uros Plavsic.

The former Hamilton Heights star was the only consistent offensive option, shooting 9-of-11 in the paint. The rest of the team was just 14-of-46 from the entire field, including the backcourt of Santiago Vescovi, Josiah-Jordan James and Zakai Ziegler finishing a combined 2-of-15 from behind the arc.

The Vols were a horrendous 3-of-21 as a team on 3-point attempts, but even more stunning were the number of easy buckets — some as open as warmup bunny layups — that were missed.

"In games like this, you've got to make uncontested layups," Barnes said. "Every game people work hard to take away our perimeter players. We missed a lot of shots at the rim. I mean, some of them uncontested or mildly contested.

"The difference in the game was rebounding. They did whatever they wanted to do. We gave them too many points there. They thoroughly beat us on the boards."

Any team, even a conference contender, can suffer through a frustrating off day offensively. But a potentially more glaring weakness for this Vols team that may have been exposed once again was getting completely outplayed physically on the glass.

For the third time in as many losses this season, Tennessee was outrebounded, and this time by a monstrous amount as Kentucky grabbed 13 offensive rebounds and finished with 20 more total boards. Although scoring surges by the Vols were few, each mini run in the second half was answered by Kentucky, typically with second-chance baskets.

Unless the Vols fix the problem of allowing teams to be more physical in attacking the rim, if that aspect remains an inconsistent flaw, they will become a candidate for an early exit from the NCAA tournament.

"We didn't do our job," James said. "Too many second-chance points, and we let them get confident. The three losses we've had, especially today, we didn't crash the glass. That's what championship teams do night in and night out.

"It's tough because we pride ourselves on being the toughest team. We've got to look ourselves in the mirror and be better." 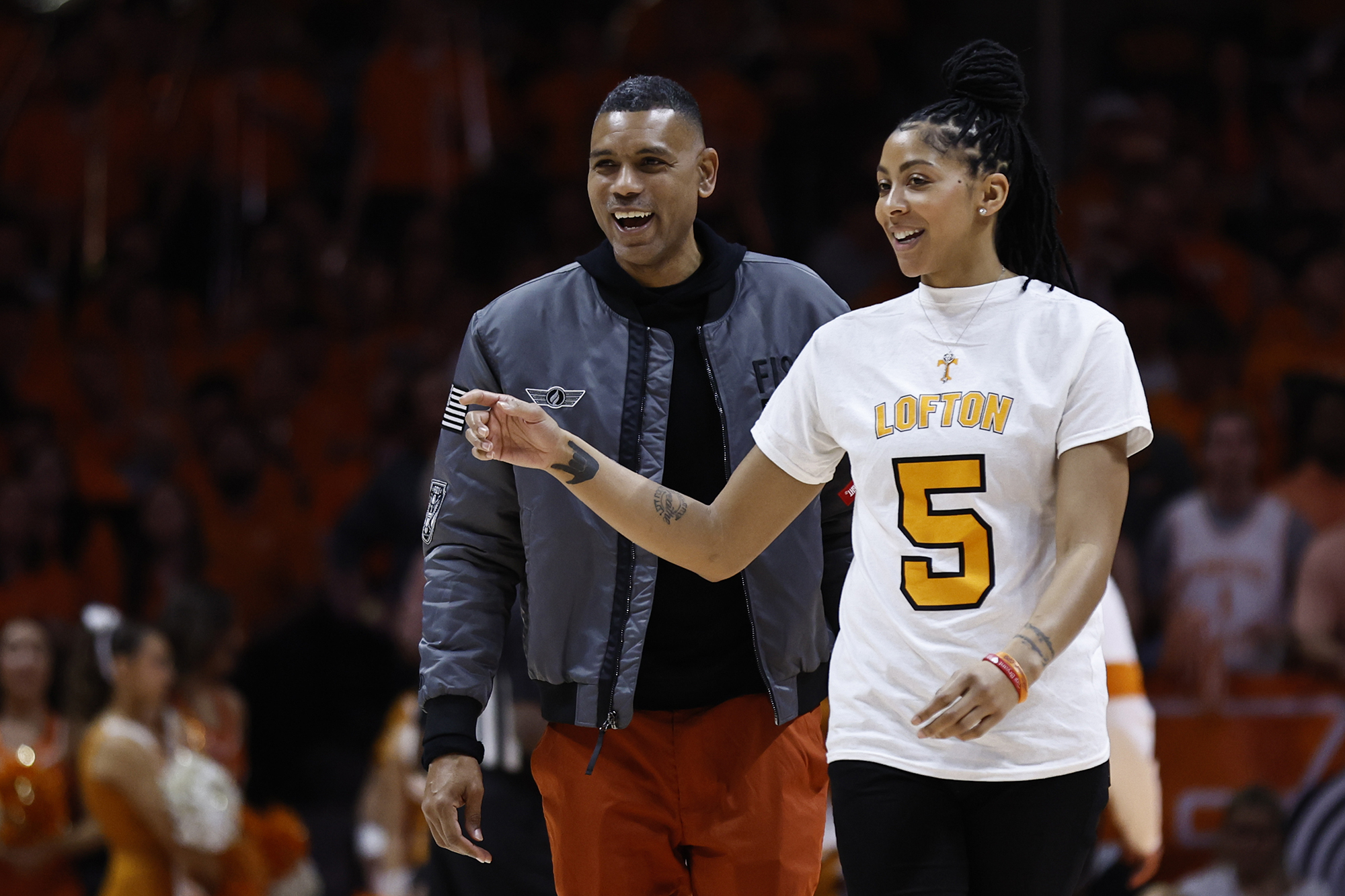 AP photo by Wade Payne / Former Tennessee basketball players Allan Houston and Candace Parker walk to the court at Thompson-Boling Arena on Saturday in Knoxville. They were on hand for the retiring of former player Chris Lofton's No. 5 jersey during halftime of the Vols' game against Kentucky.