For Caiden Botts to shine in his first Cleveland-Bradley Central basketball matchup at Jim Smiddy Arena meant a lot to the versatile 6-foot-5 junior, who transferred this past semester from Silverdale Baptist Academy.

Botts showcased his toughness driving to the hoop, as he made all six of his field goals inside the paint and also sealed the 59-55 win for the Bears with a last-second rebound following Cleveland's 3-point game-winning attempt in overtime.

Before icing the game from the free throw line, an energized Botts leapt high at mid-court with teammate Dee Reid.

"My granddad had his basketball jersey number retired here, so to come back and put on for my hometown means a lot," said Botts, who helped lead Bradley Central's strong 61% shooting mark from 2-point range as they scored 44 points inside the paint in the District 5-4A victory.

"I love all these guys. We are all brothers and all play for one another. We really click off and on the court. To battle with them every day means a lot to me."

Bradley Central (12-3, 5-2) played with confidence on their home court as they trailed for less than three minutes in the victory against ninth-ranked Cleveland (16-5, 6-1).

Reid was a force defensively with two steals and a block in the first quarter, while the athletic junior guard also made a key impact with 10 second half points. Ramireon Taylor also stepped up on the defensive end with a strong contest on the Blue Raiders' final shot attempt, which fell into Botts' hands.

The Bears were also provided sparks by Jackson Ary, as the 6-foot-7 post had 13 points, eight rebounds and four assists, and from senior point guard Trevor Carpenter, who scored 15 points on 6-of-12 from the field with a pair of 3-point makes. Botts led the way with 17 points, which included a strong right baseline drive through two defenders for a tough basket late in the third quarter.

"These guys have put in the work," Bradley Central coach Zach Carpenter said. "This strong season we've had is about them. They practice hard every day and we have a great group of guys, who all stepped up tonight. Caiden was big time tonight, Dee played great for us on both sides of the ball and Jackson has really come on these last two games."

Cleveland was led by senior guard Gabe Leeper with a team-hgih 16 points, including a game-tying left-handed layup to force overtime. Jasen Brooks finished with nine points, 11 rebounds and four steals, while Anyone Thomas added 13 points in the defeat. 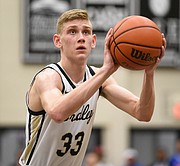 In the girls' game, second-ranked Bradley Central improved its win streak over district opponents to 120 straight with a 60-31 victory in which Jason Reuter's team forced 26 turnovers.

The Bearettes (19-0, 7-0) had a 20-0 run which featured freshman Kimora Fields, who hit a tough turnaround jump shot and then had high-point block on the defensive end. Fields finished with 16 points, eight rebounds and six steals.

Hannah Jones, Avary Brewer and Harmonie Ware also stood out in the win, combining for 38 points.