Local residents awoke on Oct. 1, 1947, to the Chattanooga Daily News front-page headline that Tennessee Supreme Court Justice Alexander W. Chambliss had died. An accompanying editorial tribute by publisher and president Julius Ochs Adler posted a question: "How can we go about telling of his influence on this community?" and then proceeded to enumerate the many ways Chambliss had affected his community: "Tennessee mourns the passing of its distinguished chief justice and Chattanooga suffers the loss of a citizen of infinite variety and usefulness who for over 60 years touched every phase of the good life here and whose many services to the community and the state affected every citizen in a constructive way."

Adler's high praise would be echoed by countless others across the state during the days that followed. Tennessee Gov. Jim McCord offered his own assessment of Chambliss's death, noting "the state of Tennessee has lost a distinguished citizen and an outstanding jurist ... . [H]e commanded the respect of those who were fortunate enough to know him and whose career will undoubtedly be an inspiration to the young men in the legal profession of Tennessee."

Chattanooga's Alexander Wilds Chambliss garnered accolades throughout a career that began with his admission to the Virginia Bar in 1884 and continued, after a relocation to Chattanooga, with the practice of law in a firm that would be known as Chambliss and Chambliss. Shortly after his arrival in Chattanooga, Chambliss married Lillian Nelson, and they had two children: John A. Chambliss, attorney and Tennessee state senator, and Mrs. Sam E. Whitaker, wife of the U.S. Court of Claims judge. After his first wife's death, he married Agnes Shallady, who also preceded him in death.

Chambliss first entered public service in 1896, when he was elected to the Tennessee state Senate. Five years later, he became mayor of Chattanooga and then was re-elected for a second term in 1903. Following his two terms, he returned to the law and civic leadership. When his friend, Adolph S. Ochs, went to New York to purchase The New York Times, Chambliss accompanied him as his attorney and handled the legal details of the transaction. He served as legal counsel for J.B. Pound in the consolidation of his hotel chain -- including Chattanooga's Hotel Patten -- and assisted in the founding of Provident Life and Accident Insurance Company (now Unum), serving as a director for many years. 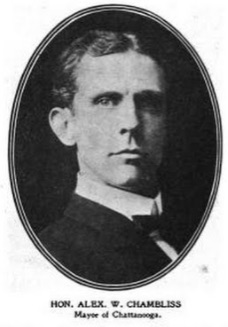 In 1919, Chambliss was elected to another term as Chattanooga's mayor, his third time to hold the highest local office. He was re-elected in 1923, but, only a few months into that term, resigned to accept an appointment to the Tennessee Supreme Court by Gov. Austin Peay. When he was encouraged in the 1930s to campaign for Tennessee governor, he refused, admitting that he enjoyed the work of the court, especially "the mental agility required to work out intricate legal problems, search the authorities and draw fine distinctions on points of law." His written opinions were "cited in written reports as leading cases, particularly those dealing with corporate law."

Gifted with a "ready wit and pleasing address," Chambliss was a favorite speaker at key events across the state. He had a passion for poetry and frequently quoting favorite passages that enhanced his serious comments, but he also was a master storyteller, often including humorous anecdotes that had his audience laughing loudly. His skills as an accomplished and "fair" parliamentarian added to his speaking skills. Chambliss was often asked to preside at state conventions and meetings, where his "unfailing good humor" rendered his "firmness" acceptable.

Elevated to chief justice of the Tennessee Supreme Court on Feb. 3, 1947, Chambliss attributed his success to a firm belief in "the ability of men to overcome obstacles through sheer will." He often shared a childhood remembrance of saying "I can't," only to have his mother hand him a dictionary, asking him to find the word "can't." When he was unable to find it, he yielded to her advice and "for the rest of his life refused to use the word." His favorite saying became: "Read books and know men."