MELBOURNE, Australia (AP) — On the court at Rod Laver Arena on Tuesday night, Victoria Azarenka — the athlete — displayed the same confident brand of take-the-ball-early, hard-hitting tennis that carried her to two Australian Open titles and the No. 1 ranking a decade ago.

That was responsible, in part, for the way she beat No. 3 seed Jessica Pegula 6-4, 6-1 to return to the semifinals at Melbourne Park for the first time since those triumphs in 2012 and 2013.

After the match, Victoria Azarenka — the person — opened up about how, away from the court in recent months, she managed to learn a new mindset by, in her words, “Trying to be neutral, not to go negative; accepting the anxiety that I have; accepting the fear that I have.”

And that, too, she explained, allowed her to deal with a fear of failure and play once again to the very best of her considerable abilities, which she certainly did against Pegula, who hadn't dropped a set in the tournament and ceded only 18 games through four matches until Tuesday.

The two — her professional and personal lives — “are definitely connected,” Azarenka said.

“I don’t think that one goes without the other. I feel like a tennis court — probably for everybody, but for me, especially — triggers a lot of those fears, a lot of anxiety,” she continued. “It’s kind of like an open canvas. When everything comes there at a high-pressure moment, high-stress moment, weird emotions come on the court. Sometimes, like, ‘What ... are you thinking about on the court?’”

A key turning point, one that helped her realize she needed to confront what was bothering her, came when she broke a few rackets after a loss at a tournament in October. 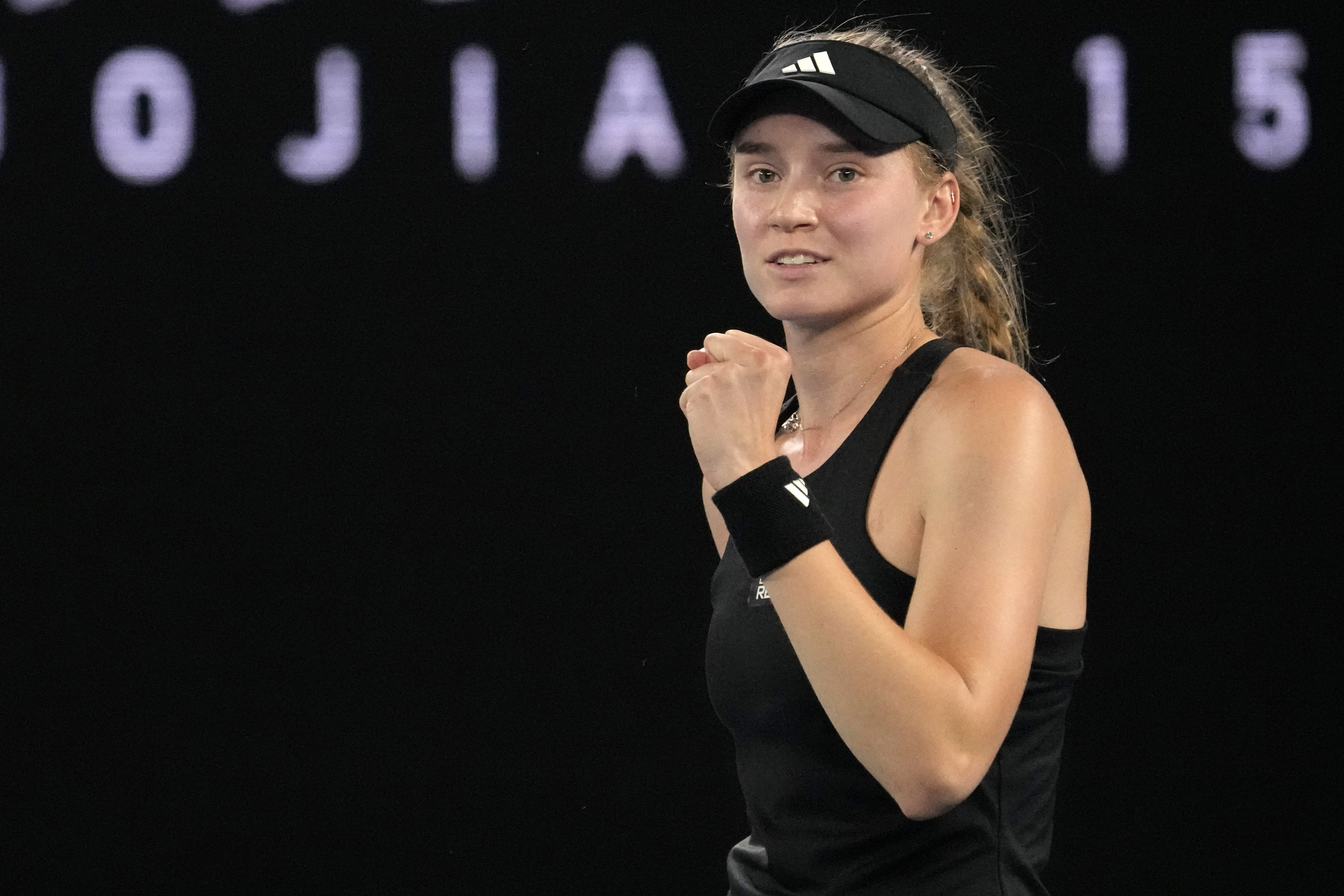 “I don’t think you recognize it right away. I think it builds up until you hit kind of a pretty bad spot where nothing kind of makes sense. You feel kind of lost,” Azarenka said. “I was at the point where I couldn’t find anything that I feel good about myself. Not like even one sentence.”

The No. 24-seeded Azarenka’s semifinal opponent will be No. 22 Elena Rybakina, the reigning Wimbledon champion, who defeated 2017 French Open winner Jelena Ostapenko 6-2, 6-4.

Rybakina — who was born in Moscow but has represented Kazakhstan since 2018 because it offered to fund her tennis career — hit 11 aces to take her tournament-leading total to 35.

In men's action, Karen Khachanov reached his first semifinal at Melbourne Park — and made his second consecutive trip to the final four at a Grand Slam tournament, following his run at the U.S. Open last September — when 22-year-old American Sebastian Korda stopped playing in the third set because of an injured right wrist while trailing 7-6 (5), 6-3, 3-0.

Khachanov will face No. 3 Stefanos Tsitsipas, a 6-3, 7-6 (2), 6-4 winner over Jiri Lehecka, for a berth in the men’s final. Tsitsipas, a finalist at the 2021 French Open, got to the semifinals in Melbourne for the fourth time by saving all eight break points he faced.

A three-time runner-up at the U.S. Open, most recently in 2020, Azarenka has always played most effectively on hard courts, and that showed again on this evening. She repeatedly got the better of lengthy exchanges of forehands and backhands; Pegula made eight of the match’s first 10 unforced errors.

After some misses, Pegula would sigh, roll her eyes, slump her shoulders. She often looked into the stands at her coach, Davis Witt, to say something, including one exclamation about the ball speed: “It’s so ... slow!”

“Just made it tough for me to feel like I could really pressure her,” Pegula said. “Felt like she was pressuring me constantly.”

Pegula, a 28-year-old from New York, was playing in the quarterfinals in Melbourne for the third year in a row but fell to 0-5 for her career at that stage in Grand Slam tournaments, with each loss in straight sets. Her parents own the NFL's Buffalo Bills, and Pegula wore a patch on her skirt during matches with the No. 3, the jersey number of player Damar Hamlin, who collapsed on the field during a game on Jan. 2.

Her exit Tuesday leaves No. 5 Aryna Sabalenka as the lone top-20 woman still in the bracket. On Wednesday, Sabalenka will play unseeded Donna Vekic in the quarterfinals, while No. 30 Karolina Pliskova faces unseeded Magda Linette.

Now 33 and a mother — she walked into the stadium wearing a jersey from Paris Saint-Germain, the favorite soccer team of her son, Leo — Azarenka, who is from Belarus, delivered big shot after big shot, raced to a 3-0 lead in 12 minutes, and never really let Pegula, a good friend, into the match.

“Leo doesn’t really care so much that I’m playing here. ... Obviously, he is watching some matches, but he definitely wants his mom to be home," Azarenka said. "So a few more days here, and I’ll be back.” 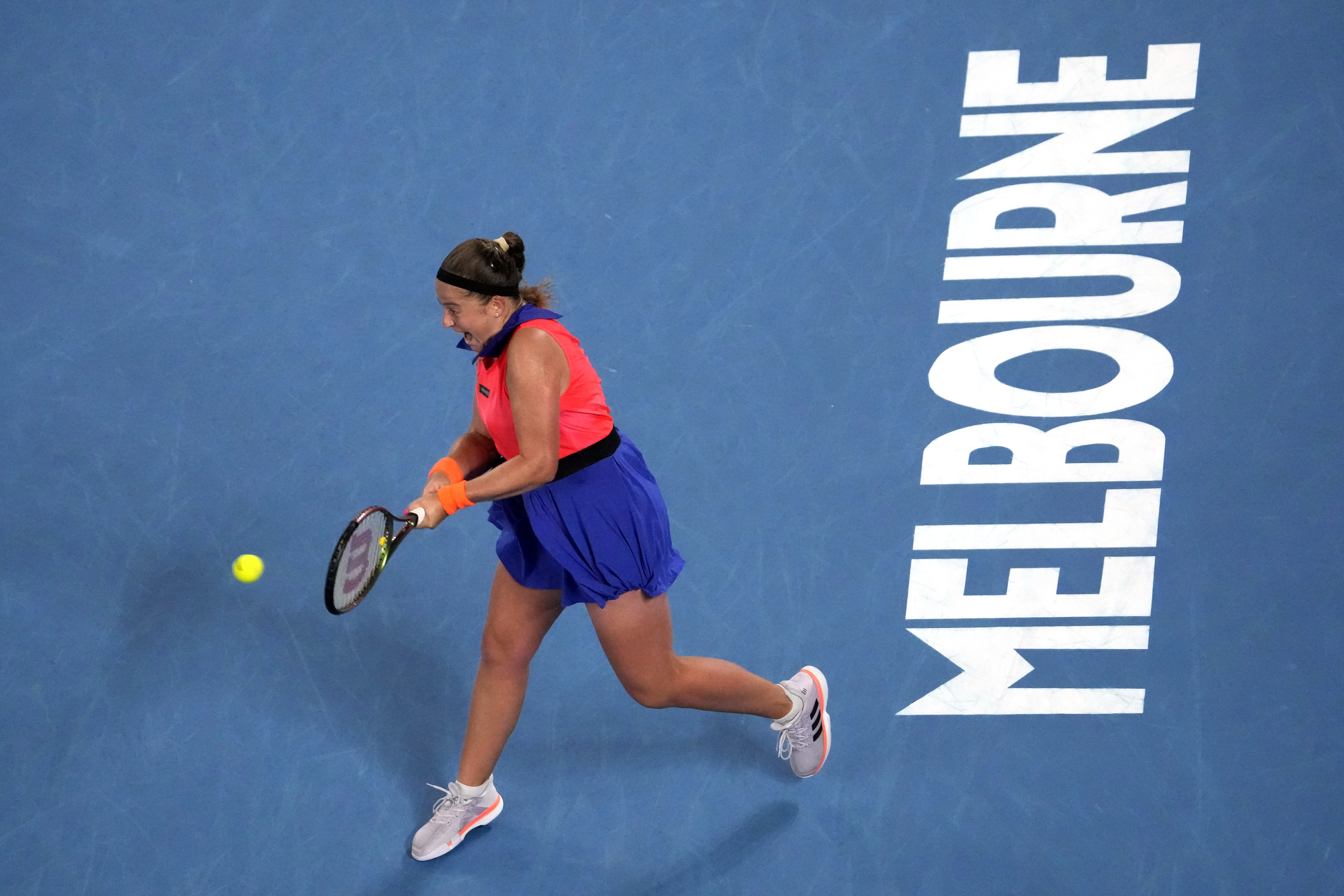