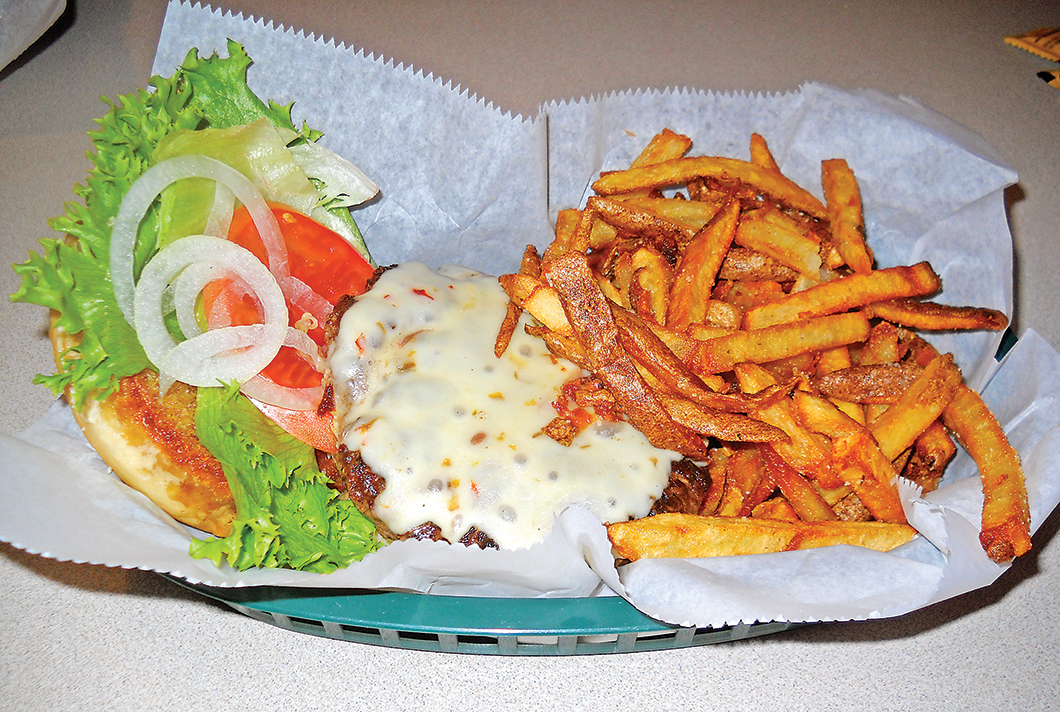 The 7-ounce Slick burger, covered with pepper jack cheese, comes with lettuce, tomato and onion, plus a generous helping of hand-cut fries.

The little brick and concrete block building on a rise in "downtown" St. Elmo has been home to several bars and restaurants over the last decade, but none of them has become king of the hill.

Slick's Burgers is the latest to try its hand.

With a fairly simple menu of burgers and sandwiches and beer on tap, it appears poised to offer a quick lunch or dinner for tourists and businesspeople and an evening place to grab a cold one for the neighborhood's hipsters and wannabes.

A sandwich board displays specials of the day. On the day we were there, they included a specialty turkey burger, a barbecue burger, a Greek burger and a BLT (bacon/lettuce/tomato).

You can make any sandwich a combo (with fries and drink) for an extra $3.

Since this was a burger place, I felt obligated to try a burger, so I went with one of the specials of the day, the Gobbler ($8, $11 for the combo), which was the specialty turkey burger.

The sandwich board described the burger as having ground turkey, hoisin barbecue sauce (a Chinese-influenced sauce), homemade sriracha slaw and pickles.

My burger came on a plain Niedlov's Breadworks bun. That was such a nice change of pace in a restaurant world that wants to give you anything but a nice, soft bun.

Inside, the turkey burger didn't come close to filling the bun (at least a half inch off) but was delicious with its Asian inspired barbecue sauce and slaw. I might have expected a bit more slaw for the relatively high burger price, but I enthusiastically ate every bite.

The hand-cut fries were similar to those served by Five Guys or the former Boardwalk Fries location in Hamilton Place mall. Generous in portion, they were not overly done and had enough salt to bring out the taste. They were gone in a hurry.

My brother ordered the Slick ($7), the 7-ounce house ground burger, which came with lettuce, tomato and onion on the side. He added pepper jack cheese.

After the first bite, he proclaimed it "one of the best burgers I've ever had." And he didn't change his opinion after the last bite, complimenting its soft bun and the flavor of the meat. He also was a fan of the hand-cut fries.

Diners place their order at the front counter - the choices are above the counter on a lighted blackboard - and the attendant there was friendly and quick in answering our questions. You serve yourself soft drinks or tea, and your table has paper-towel rolls to wipe any gooey mess that manages to slip out of your burger. Ketchup and mustard are on each table, and the attendant who brought our meals asked if we wanted mayonnaise and returned with two packets when we said we did. At least three people, between the time our meals were served and when we left the building, asked how the meal was or thanked us for coming in. One of them - a man with a shaved head - may have been Slick himself. It's nice to feel welcome.

The eclectic decor offers walls filled with a multitude of old metal signs advertising beer and cigarettes, and, among other things, vintage mirrors, a cow skull and a Volkswagen Beetle hood. The dropped ceiling over the light blue walls (and one exposed brick wall) is painted black and is strung with lights. A TV is high on the wall in one corner. Pendant lights or wall lamps, both with glass shades, offer additional lighting over several of the booths. Seating is ample at five four-person booths, one three-person booth, one table of six, one table of four, two high tables and a counter-like table for three, but there is plenty of room to move about. The bar seats three - four if you know each other well. Several theater seats offer rest for patrons waiting to be seated or those waiting for takeout orders.

The price for my turkey burger combo was a tad higher than I'm used to paying for lunch, but the burger and fries were delicious and made me want to return and try some of the combinations with egg, bacon and the different cheeses. As the offspring of former small-business owners, I always want to see local restaurants do well. So I hope the little hill has finally found a long-term resident.