When 4,000 beagles bred for experimentation were rescued from Envigo RMS in August, volunteers from the Humane Educational Society transported 21 of those dogs from the Cumberland, Virginia, breeding facility to Chattanooga. Hundreds of Chattanoogans applied to adopt the dogs, who experienced conditions described as tortuous.

Federal officials accused Envigo RMS of a series of animal welfare violations in May, in response to a complaint from the People for the Ethical Treatment of Animals. During an undercover investigation conducted in 2021, the organization found 5,000 beagle dogs and puppies confined 24/7 in prison-like cages and kennels, according to PETA's website.

"They used beagles because they're so good natured," says Yvonne Ownby, one of the lucky few Chattanoogans who was able to adopt one of the dogs from the facility, a female beagle she named Thomasina.

The beagles at the facility were often deprived of adequate nutrition, leading to painful dental problems and difficulty eating. Employees sprayed the dogs' cages with high-pressure hoses while the dogs and their food were still inside, and afterward the dogs were left wet in their cages with food that was often moldy or covered in maggots or waste.

Ownby and Clare Gruber, a Lookout Mountain resident who adopted a male beagle named Beau, both noticed their new family members were missing their dewclaws, which are basically a dog's thumbs and big toes. Workers were instructed to remove newborn puppies' dewclaws where the bone met the nail without using anesthesia, according to PETA's investigators. 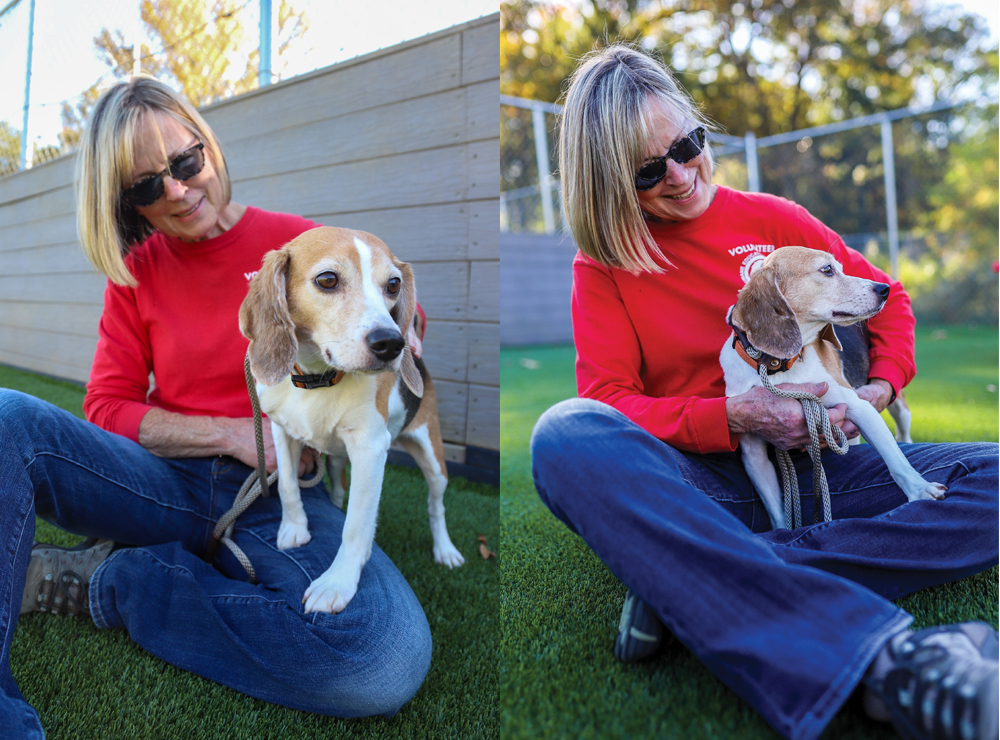 Staff photos by Olivia Ross / Yvonne Ownby sits with Thomasina outside at the Humane Educational Society.

Thomasina is the smallest of Ownby's five dogs, who are all very gentle with their new sister, Ownby says. She is docile and sweet, which are common traits for beagles -- unfortunately making them an ideal dog for breeding and experimentation.

Beagles are also known for being vocal creatures, and the baying sounds from the thousands of beagles housed at the Virginia facility could be heard from miles away, rescue volunteers from Chattanooga said.

Ownby lost a beagle, Lulu, in March, and Birdie -- LuLu's favorite canine companion -- was overcome with grief, she says.

"It was so sad, and I thought, 'She needs another little LuLu,'" Ownby says of Birdie. "Now they're best buddies. They sleep together."

Birdie, whose breed is unclear, was also adopted from the Humane Educational Society. She was named Birdie because of the bird-like shape of her feet, which is likely a result of being confined to a crate, Ownby says. Ownby fostered Birdie, who was returned to Ownby twice by adopters who couldn't handle her nervous and destructive behavior.

But Birdie does fine with a companion like Thomasina to keep her in line. Thomasina is doing well, but it's taken some time, and she still needs some work.

Thomasina was terrified of doors when Ownby first brought her home, she says.

"I would open the door, and she would run away from it," Ownby says, adding that Thomasina used the dog door before she was willing to go through the regular door. "It was really sad."

Thomasina was terrified the first time she saw Ownby with a towel on her head after a shower, but she loves following Ownby around the yard when she uses the riding lawn mower.

At the Envigo facility, Thomasina was identified as "CHP CFN," according to her tattoo.

Puppies' ears were tattooed with needled clamps by workers who then rubbed paint into the holes.

Thomasina also has a hole in her ear, and it's unclear what caused it. Many of the dogs are injured in fights, according to the PETA investigation.

She's small for a beagle, likely because she was forced to have so many litters. She was only 17 pounds when she was adopted, and although she's "noticeably bulkier," she's still under 20 pounds, Ownby says.

"She's funny when she eats, and she won't eat any hard treats," Ownby says of Thomasina, who, like most of the rescued beagles, has problems with her teeth. She has to soak her dry food and mix it with canned food so she's able to eat. 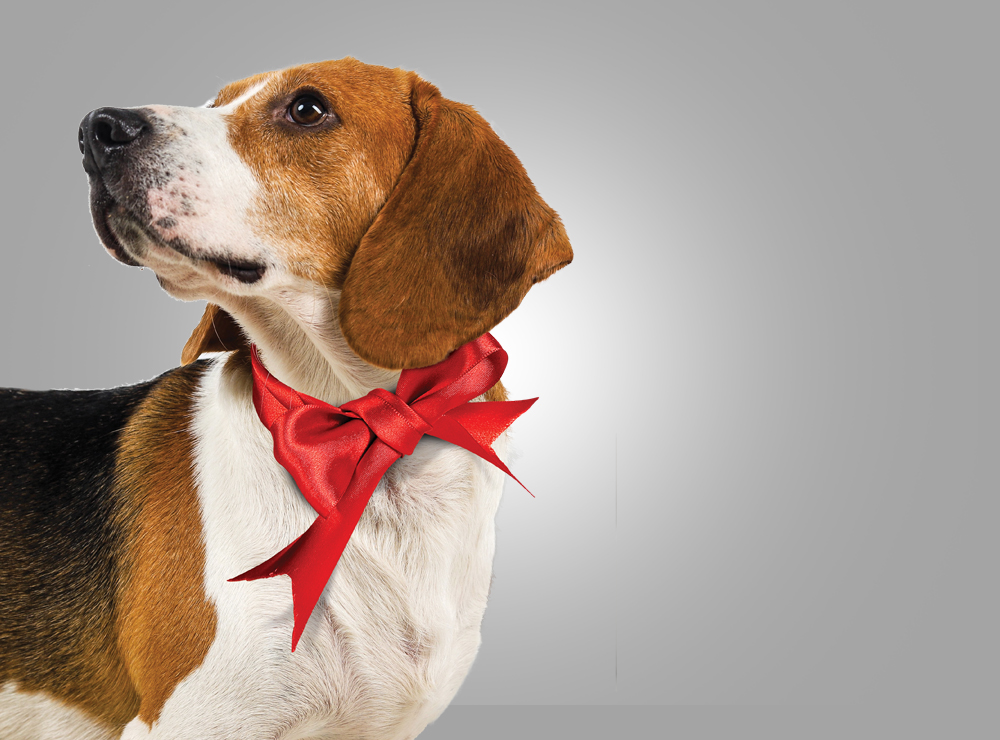 House-training Beau, a male beagle adopted by Gruber, is still a work in progress, Gruber says.

"The diapers have been a saving grace," Gruber says, adding that Beau loves to mark his territory -- and everything is his territory.

When Beau first came home with her, he hadn't been neutered yet, and his choice in potential mates was equally indiscriminate.

"He humped everybody," Gruber says of her other two dogs, a male and a female, both adopted from the Humane Educational Society. "He was one of the studs, so I guess he was doing his job."

Beau doesn't know how to do a lot of the things humans think dogs just naturally know how to do, such as how to jump onto a couch or go down some stairs.

"Every sound freaks him out, and he barks at the broom," Gruber says, "but the vacuum doesn't bother him."

Rather than walking on a leash, Beau does his business in a fenced-in backyard that he accesses through a doggie door. But it took a while for him to learn to use the grass as his bathroom, because he'd never gone anywhere outside his kennel. He's not quite sure how to handle kisses and cuddles, but he's getting there, Gruber says.

"Sometimes I'll just throw a magazine down, and he'll just rip it up and think that's the best thing in the world," Gruber says. "He was so wound up when we first got him. He was like a caged animal. It took him a couple of weeks to settle down."

Beau had trouble eating until he had dental surgery to remove some decayed teeth, which were likely painful. Due to poor nutrition, the teeth were so decayed that they just crumbled as they were removed, Gruber says.

A few times in the first month after his adoption, Beau tried to eat his own waste, which is something he probably had to do to survive when he was deprived of food -- a common occurrence at the Virginia breeding facility. 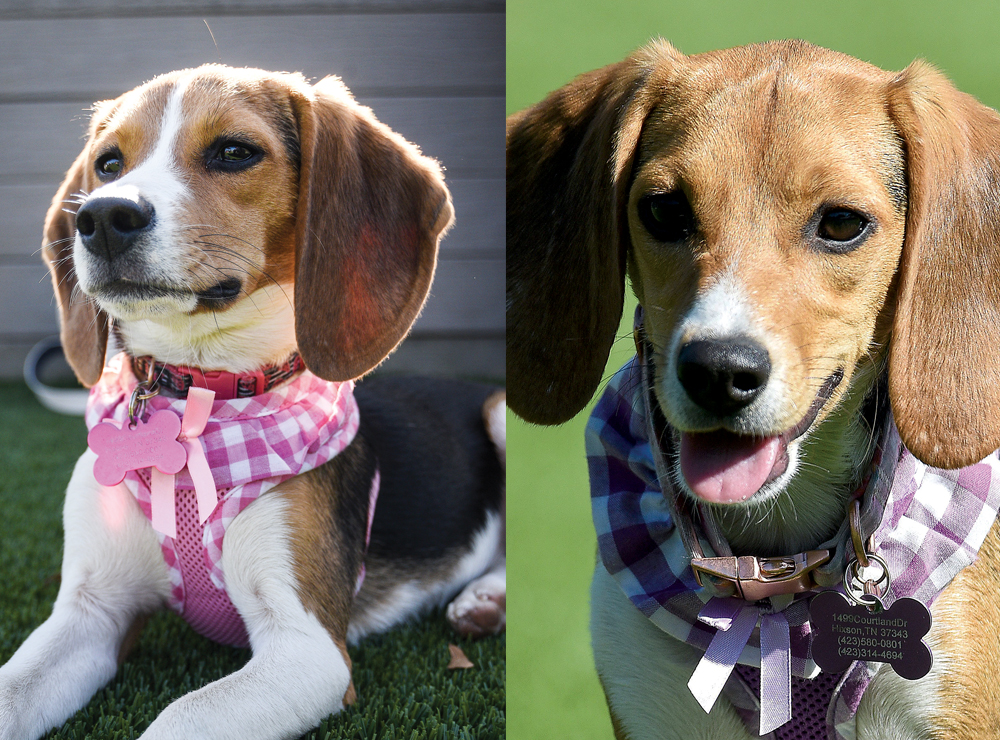 Thomas, Belinda, Arya and Charlotte Skinner, and Piper and Pippa

When they started dating, Thomas and Belinda Skinner both had beagles, Hank and Bonnie, who are both 15 now.

"We were following the story of the Envigo breeding facility, and it just pulled on our heartstrings," says Thomas Skinner. His family owns Vine Street Market, and Anita Headrick, who owns neighboring Riverview businesses Alice Blue and Hanover Blue, was hosting an event to get two of the Envigo beagles adopted. A customer told him he needed to go see the beagles, and a half-hour later he was Facetiming with Belinda and his daughters, Arya, 4, and Charlotte, 1, and decided to apply to adopt the dogs.

"Two days later, we had a pack of four [beagles] and two small children," he says.

Their beagles from Envigo, Piper and Pippa, are sweet and playful dogs.

"They're just high-energy, which matches the children," Thomas Skinner says. "We wanted the girls to grow up with dogs of their own, so it's been fun."

So, of course, they couldn't come home with just one beagle.

"We had to have both of them," Belinda Skinner says of Piper and Pippa, who are littermates. They pile onto each other when they sleep, and it's easy to tell that they're siblings, Thomas Skinner says.

He wasn't aware that the dogs had a neurological disorder until the person at the shelter who reviewed his application told him about their condition and asked if he still wanted to adopt them.

"I knew they were kind of walking a little funny, but I thought that was just puppy legs," Thomas Skinner says. "It makes them unique."

The dogs make young Charlotte Skinner laugh and smile, but she doesn't like it when they give her kisses.

"It's a little much for her, because they're on the same level," Thomas Skinner says of his younger daughter and the beagles, who are around the same height.

Four-year-old Arya Skinner immediately claimed Piper as her own, and she likes when Piper falls asleep on her, she says.

Thomas Skinner says customers recognize the dogs when he occasionally brings them to work.

"They're almost famous," he says of Piper and Pippa, and Headrick considers herself their "puppy godmother."