On Oct. 23, Jennie Hobbs joined a small circle of people in chairs, while about a hundred more looked on, and answered a prompt designed to invite calm upon a controversial subject:

"This is what I know about immigrants, and this is when I learned it."

Polarization nationwide has shaken many social institutions – schools, families and churches among them.

Disturbed by his perception that Americans have become terrible at talking to people they disagree with, and inspired by a recent book that details a strategy for the task, Malone hopes to bring the approach into the community at large.

His Christ United Methodist Church is one of the largest in the area, and since the inaugural session he's been organizing highly structured conversations in his church around often difficult subjects.

The approach, as enacted in these "3Practice Circles," offers a vision of communication with special relevance to the evangelical tradition: It suggests that, when confronted with someone who sees the world differently than you, the essential task is not to convince, or even come to an agreement, but to simply listen well.

"If more Christians lived the way of Jesus Christ," Malone said by phone Thursday evening, "I believe more people would want to follow him."

Mic in hand, Hobbs, who through her work in human resources has helped people immigrate, recalled by phone Thursday telling her small discussion group, and all observers in the room, that being an immigrant is "really, really hard," and that it takes a lot of courage and determination to immigrate to another country.

When her two minutes was up, the second part of the structure kicked in. Listeners could ask questions, but they had to begin with the words: "I'd be curious to know"-- and their question would effectively grant the speaker an additional minute in which to respond.

Things Hobbs's questioners were curious to know included how much immigration can cost and whether the immigrants she works with had come legally.

Hobbs said the enforced conversational structure, by which all responses had to come from a place of curiosity, felt "safer" than she anticipated, and that she felt "empowered" to speak her mind. 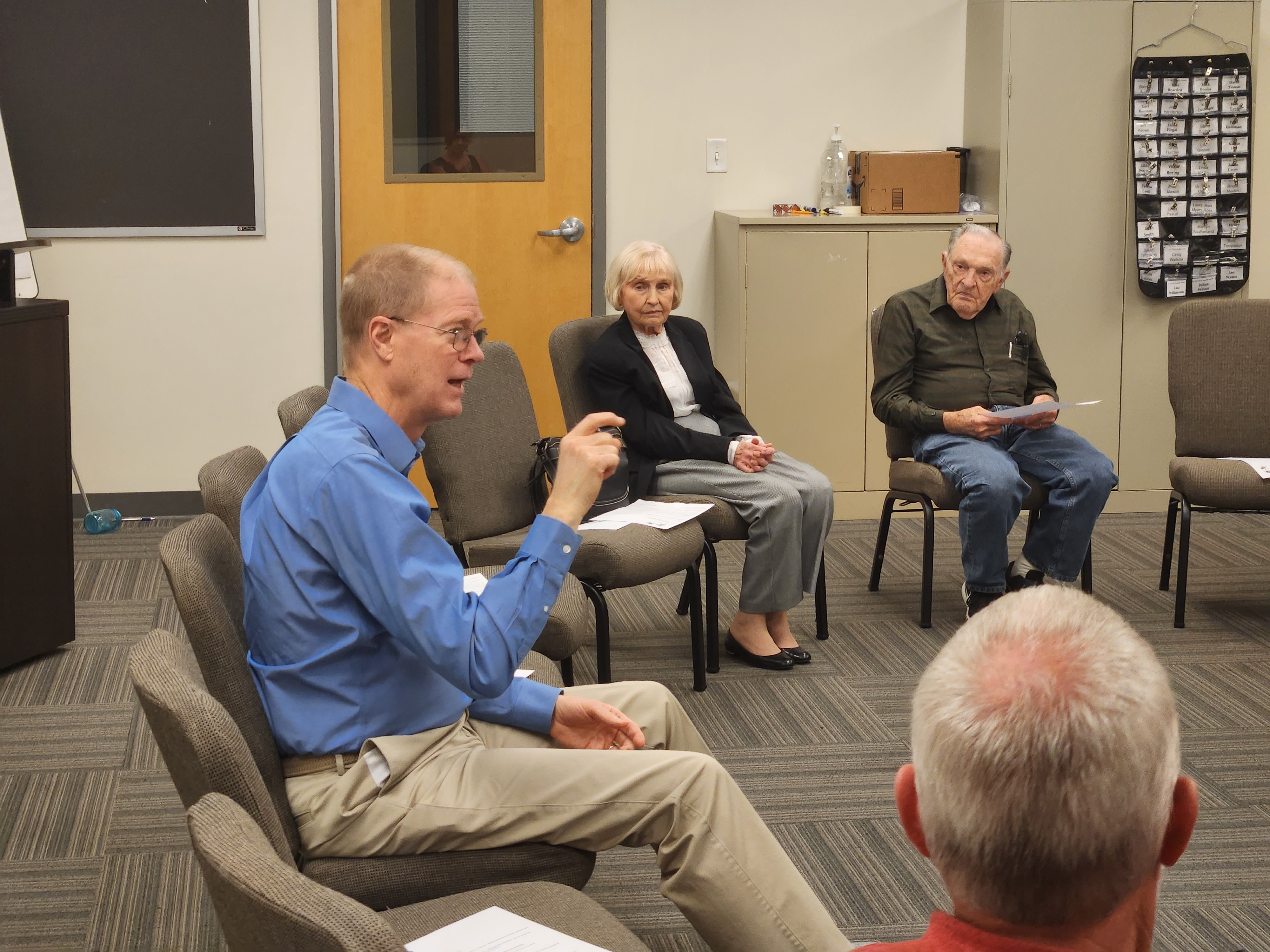 Malone, the pastor, encountered the book, "3Practices For Crossing the Difference Divide," in the summer of 2021. With the 2022 election season approaching, Malone went back to the book's website and invited its authors, Jim Henderson and Jim Hancock, to facilitate the Oct. 23 discussion session. Malone also took a class to be "referee" – trained and certified to lead discussions in which everyone adhered to three specific practices:

-- I'll stay in the room with difference.

-- I'll stop comparing my best with your worst.

A musician with ever-alert ears, Henderson first heard someone say that last one 20 years ago and thought, "that's a killer hook."

The other two practices came in time, he said by phone Wednesday, and after teaming up with Hancock on a documentary film, the two of them -- finding common cause in their desire to learn how to help people talk to each other better -- wrote the book and began organizing events aimed at applying the lessons from their research.

Henderson was once a pastor. He was interested in evangelism but noticed it often didn't go well and wanted to improve.

"Life is a marketplace of ideas that are competing with each other for a reality narrative," he said. "It's all up for grabs."

Christians have their own narrative of reality, Henderson said, and he said he feels their traditions often train adherents to think "my job is to have superior information such that I can defeat your argument."

"We're not trained to actually out-listen people," Henderson said, but "what if Christians were thought of as the best listeners in the world?"

Ultimately, his efforts to "revitalize evangelism as a spiritual practice"-- which involved interviewing atheists, focus-group-style -- didn't work, he said. Still, it made him more comfortable with difference and turned out to be "great training for the political problems to come."

He said by phone Wednesday that "2020 and 2021 were the most stressful seasons of my entire ministry."

Amid the pandemic, Walliser worked to cultivate a vision of Christianity that he felt transcended partisan politics.

But, as in the case of many churches, the contours of those partisan politics found their way into his roughly 7,000-member congregation.

"You have the mask or no mask, right. You had every extreme possible within the church. So what did we do? We created services just for people to wear masks," Walliser said. "We had some services where if you don't want to wear a mask and did not want to social distance, we can do that as well."

He said criticism came from all around. Some people said, "What, are you trying to kill us?" But others felt the government had no business preventing the church from convening in person.

Walliser sought solid ground everyone could agree on and argued that the church should stand on "the rock of Christ."

"Obviously, we're pro-life," he said. "We believe in the sanctity of marriage, and we teach that."

But there are many ways to express Christianity, he said. Abortion may be the top concern of some. Others, he said, focus on caring for the needy or welcoming the immigrant.

"All of those things are legitimate, biblical things that our church is involved in," he said.

"And I don't like to be manipulated that way," he said.

Walliser said he tells people not to choose a party.

The denomination to which Malone's church belongs is fracturing along flashpoints like whether the church should sanction gay marriage. Some people see the breadth of the ideas of Christianity housed in the United Methodist Church as diluting its power and identity. Amy Ziegler sees the quality as a virtue.

A former teacher and longtime attendee of Christ United Methodist Church, she has attended all of Malone's 3Practice sessions, including one on Wednesday evening. She was one of about 10 people there, most of whom, she said, did not really know one another.

This week's prompt was: "This is what I wish more people understood about Christianity."

The hour proceeded, and speakers chimed in popcorn style, with this or that member of the circle breaking the silence to respond to the prompt until Malone flashed a phone timer indicating two minutes and interrupted with a firm but gentle "thank you." Then more silence.

Then the "I'd be curious to know " questioning phase began.

Sometimes people asked questions immediately. Other times, the room held silent, and everyone sat in that silence. Once, when the time ran out on a speaker who clearly had more to say, Malone jumped out of "referee" mode and offered one idea for a question. Perhaps, said Malone, someone in the room was curious to know what the speaker would have said, if only he had a bit more time to talk.