LAS VEGAS (AP) — Bubba Wallace adopted the mantra of “Peace. Love. Understanding.” to push back against the negativity and vitriol so often hurled his way.

There was nothing peaceful or understanding about Wallace's skirmish with Kyle Larson at Las Vegas Motor Speedway over the weekend. Wallace appeared to deliberately crash the reigning NASCAR champion in a dangerous retaliatory move Sunday and then he tried to fight Larson.

Now NASCAR is in a no-win situation as it decides whether Wallace was out of line.

No penalty? That will be classified as favoritism and maybe even fear of punishing the star of Michael Jordan’s race team, who remains the only Black driver at the top level of the sport.

A suspension? That would be a strong statement against what NASCAR already considers taboo — drivers using their cars as weapons — though a driver suspension in the final three weeks of the season would be another massive headache for a sanctioning body currently putting out fires in every corner.

Wallace apologized Monday, saying his behavior “does not align with the core values that are shared by 23XI Racing and our partners."

“I compete with immense passion, and with passion at times comes frustration," Wallace posted on social media. "Upon reflecting, I should have represented our partners and core team values better than I did by letting my frustrations follow me outside of the car. You live and you learn, and I intend to learn from this.”

Wallace is one of NASCAR's most polarizing drivers, and his successful 2020 push for NASCAR to ban the Confederate flag at its races deeply divided fans.

The false narrative that Wallace faked a hate crime — after a garage pull in his garage stall at Talladega was found to be fashioned as a noose — still circulates among some fans, though he never saw it and even the FBI categorized it as a noose.

Wallace claims his steering broke when Larson bounced him into the wall so he had no control of his Toyota when he shot down the speedway and hooked Larson's car.

Data will show if that's true. It doesn't pass the eyeball test. 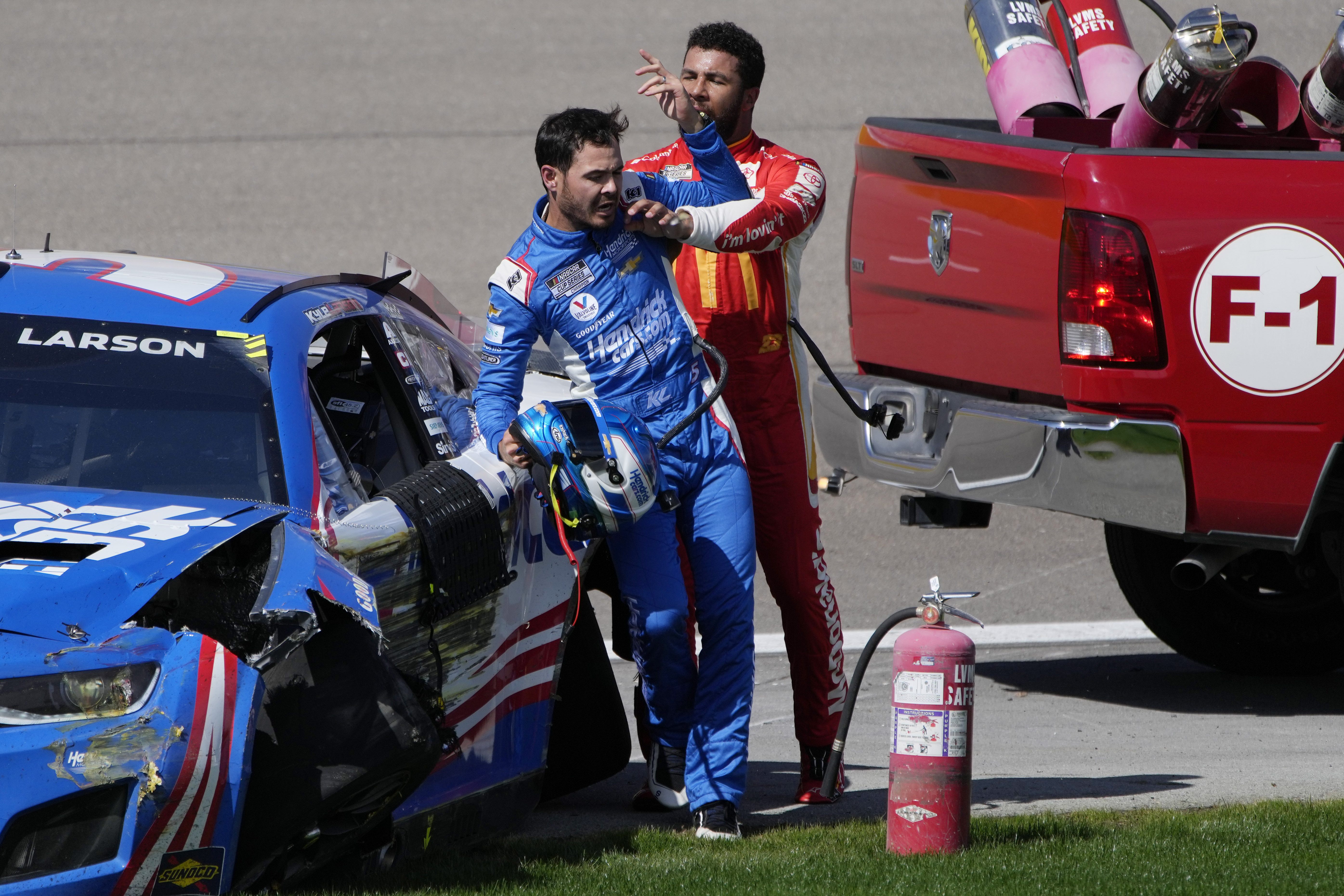 It looked as if Wallace chased after Larson to intentionally drill his car in the rear corner, one of the most dangerous moves in NASCAR racing. Wallace's hit spun Larson directly back into traffic, where he slammed into the door of title hopeful Christopher Bell.

Had he not hit Bell's car, Larson's trajectory had him headed into the wall backward in a potential nightmare situation: The new Next Gen car is too stiff in the back and drivers are absorbing far too much energy when the impact comes there. Two drivers are out with concussions, NASCAR has held safety briefings the last two race weekends, and any fix won't come until next season.

Larson believed Wallace was rightfully angry because he did squeeze Wallace into the wall. He wasn't even upset that Wallace charged after him as Larson tried to get out of the way. (“I’m 5-(foot)-6, 135 pounds. I’m not going to get too wound up about anything" Larson said last year about driver fighting).

Larson does think Wallace crossed a line in terms of safety.

“With everything that’s been going on here lately, with head injuries.... I don’t think it’s probably the right thing to do,” Larson said. “I’m sure with everything going on, he’ll know that he made a mistake in the retaliation part and I’m sure he’ll think twice about that next time.”

Wallace at the minimum broke a rule by walking on a live track after climbing out of his crashed car to confront Larson. He made contact with a NASCAR official, but most replays show Wallace was only brushing an official's hand away.

No one can predict what NASCAR might do about Wallace's repeated shoves of Larson. Fighting is a popular element of the sport, and NASCAR doesn't consistently police fisticuffs.

No matter the NASCAR decision, this is going to stick with Wallace for some time.

He has never received the benefit of the doubt from NASCAR fans and is often accused of being undeserving of his heavily funded seat driving for Jordan and Denny Hamlin at 23XI Racing. He withstands an enormous amount of hate, and those very detractors will note he's had previous outbursts against fellow competitors.

For all those same reasons, maybe Wallace deserves a bit of peace and understanding. He never asked to be NASCAR's face of diversity, and the role kind of fell in his lap in 2020 during a national reckoning of social justice issues.

Yes, Wallace benefited greatly from using that platform, albeit sometimes reluctantly. Nonetheless, it got him a great job with an exciting upstart team and it wasn't just that Jordan was now his boss; Wallace even gets to drive the No. 23 in homage to the NBA great.

With all that comes a ton of pressure.

Wallace is expected to win races now and through two seasons he's only done it twice. He is expected to make the playoffs — he's not done that yet — and be a critical cog in Toyota's core group of drivers.

His career statistics this season are up in every meaningful category except laps led, and so Wallace in theory has made significant progress.

And he's always had a chip on his shoulder, something Wallace readily admits, and he is known to be moody. Now he's got a great car and a great team and great expectations — and all of that was in the mix when Larson squeezed him. Wallace had led 29 laps and now came Larson in an aggressive game of chicken between two drivers not racing for the Cup title.

Wallace didn't budge: “I don’t lift. I know I’m kind of new to running up front, but I don’t lift.”

So he didn't. Now Bell, a Toyota teammate, has fallen to last in the eight-driver playoff field because he got caught in the melee. Even though Larson has been eliminated from the driver playoffs, his car is still in the owners' championship and finished 35th.

And Wallace? Well, he must apply his “Peace. Love. Understanding.” philosophy to whatever now comes his way from NASCAR — and everyone else. 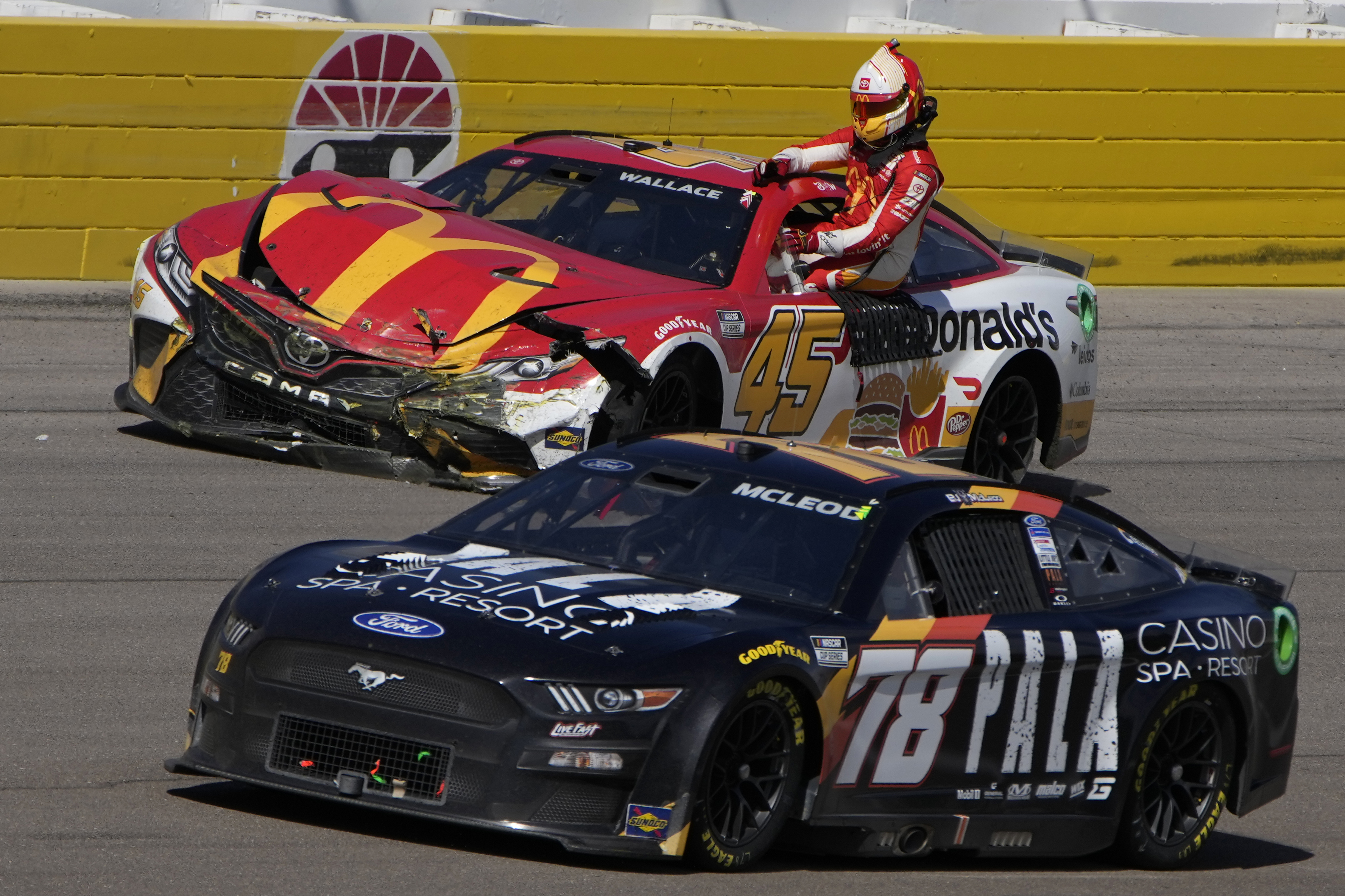 Bubba Wallace gets out of his car after crashing during a NASCAR Cup Series auto race Sunday, Oct. 16, 2022, in Las Vegas. (AP Photo/John Locher)
Advertisement
Advertisement