Even with more than 50 other coffee and pastry retailers operating across the Chattanooga region, two startup coffee outlets were picked by a panel of judges Tuesday night as the best business ideas ready to leap ahead with more expansion.

Be Caffeinated, a chain of drive-through coffee shops launched four years ago in Red Bank, won the top prize of $50,000 in the sixth annual "Idea Leap" competition among startups and small businesses pitching their plans for growth. Sleepyhead Coffee, which started in 2019 as a coffee cart and now operates out of the downtown James Building, took the second-place prize of $20,000 in the contest sponsored by the Tennessee Valley Federal Credit Union.

Each of the coffee retailers plans to use the prize money to expand offerings of treats along with their beverages.

Christopher Wood started Be Caffeinated in a former Central Park drive-through along Dayton Boulevard in 2018 along with his business partner Douglas Lee. The pair have grown the business to include four drive-through coffee outlets, and Wood is eager to add New York-style bagels to Be Caffeinated's menu.

Wood said he learned to enjoy and appreciate such bagels early in life from his grandparents in Hattiesburg, Mississippi, at their Corner Coffee Shop that prepared such bagels every day they were open.

"Any of you who have had a New York-style bagel know what I am talking about, and unfortunately there is a huge absence of that in Chattanooga," Wood told more than 100 people gathered Tuesday night at the Bessie Smith Cultural Center for the final pitch competition for the 2022 version of Idea Leap.

Wood and Lee are determined to change that by adding bagels to their growing coffee chain and trying to make enough of the New York-style bagels to sell to other grocery outlets and stores as well.

With the $50,000 prize the credit union awarded to Be Caffeinated for the best business pitch, Wood said he plans to acquire ovens and other equipment for bagel production to be able to produce thousands of bagels a day instead of the more limited number now possible with hand-rolled bagels. The company has already grown to about 50 employees at locations in Red Bank, North Shore, Highland Park and Chattanooga State Community College, and Wood said he plans to add one or two more locations within the next couple of years.

"There are a lot of coffee shops in Chattanooga, and more are moving into town," Wood said, noting that both the new Honey Seed bagel shop on the Southside and the Red Owl Coffee chain moving into town will soon open more outlets. "They each have their own appeal, and we're doing fine."

Be Caffeinated has given back nearly $15,000 to local nonprofits, and Wood said he hopes to grow that even more.

While Be Caffeinated is planning to boost bagel production, Sleepyhead Coffee plans to add a cafe to serve its vegan, gluten-free pastries and coffee.

Sleepyhead Coffee started in September 2018 as a coffee cart by co-owners Brandon Carruth and Christian Harris, who said they were inspired to launch a mobile cart after visiting San Francisco, where such carts are common.

Carruth, who said he has worked preparing and selling coffee since he was 16, said coffee tends to build relationships and community. Harris said the business is the first gay-owned coffee shop in Chattanooga and has operated since March 2019 in the James Building. The storefront was remodeled last year into what Harris said is "the most Instagrammable place in Chattanooga."

With the prize they won from Idea Leap, Carruth and Harris said they plan to buy a bigger oven and baking equipment to open a fully vegan bakery and cafe.

"We've maxed out the small space we're in now, and we're eager to expand," Harris said after winning the second biggest prize in the pitch contest.

Three local businesses won $10,000 prizes from the credit union in this year's Idea Leap contest after being chosen as finalists from among nearly 150 initial business applicants in the startup competition. They were Mountain View Low Vision Services, a provider of products, services and rehabilitation for visually impaired people; Neutral Ground Chattanooga, a New Orleans-style po' boy and yaka mein restaurant; and NewTerra Compost, a composting and waste management company for homes, businesses and events.

The $100,000 in prizes was the richest yet since the credit union created the Idea Leap contest five years ago. and Vice President Tommy Nix said the credit union plans to expand the contest next year with three separate competitions targeted at the credit union's 17-county service territory.

Since the credit union launched its Idea Leap initiative in 2016 to provide loans for startup businesses recommended by local business assistance organizations, nearly 200 local companies have received loans to help build their businesses. From the proceeds of those loans, the credit union created its annual Idea Leap grants. 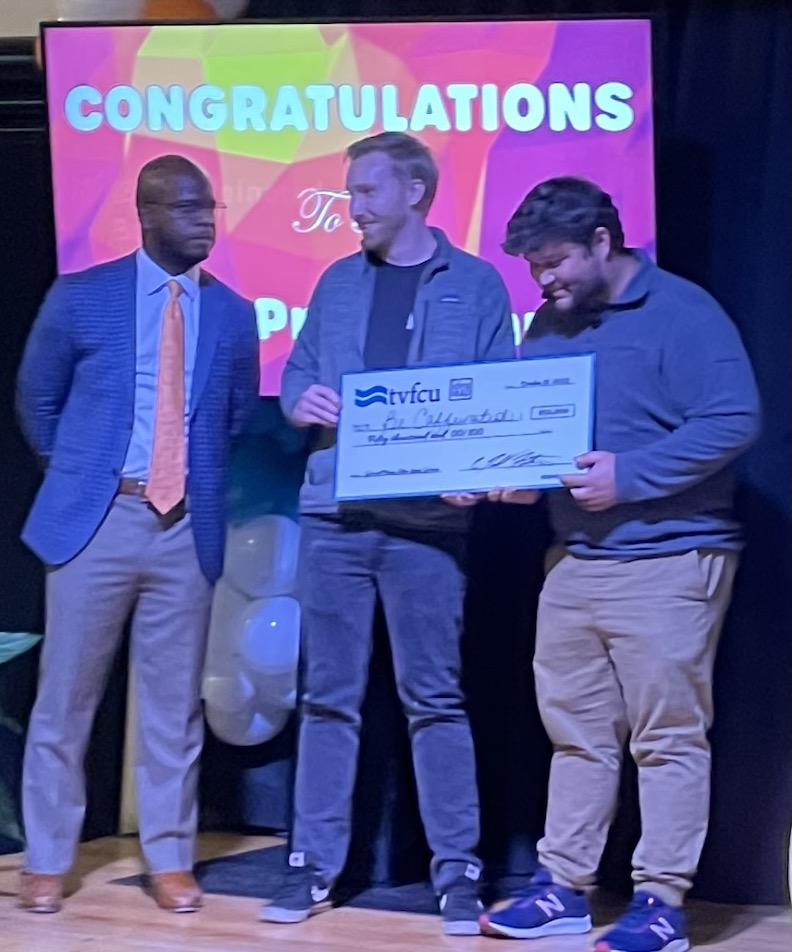 Staff photo by Dave Flessner / The co-owners of Be Caffeinated, from right, Christopher Wood and Doug Lee, display the $50,000 check they received from Marcus Johnson of the Tennessee Valley Federal Credit Union after winning the top prize in this year's Idea Leap competition. The contest awarded a total of $100,000 to small businesses judged to be able to use such funds to best expand their businesses.
Advertisement
Advertisement