NASHVILLE -- As early voting kicked off this week in Tennessee, Democratic gubernatorial nominee Jason Martin continued to press for a debate, while incumbent Republican Gov. Bill Lee insisted it's not going to happen.

"You know, I've worked really hard to stay focused on being the governor," Lee, 63, told the Chattanooga Times Free Press in a phone interview. "I'm spending the vast majority of my time doing that. That's what I think Tennesseans want me to do. And that's how I'm spending the next few weeks."

The New York Times reported this week on the erosion of election norms and ongoing debate about debates, with candidates of both major parties refusing to debate their opponents in contests around the country. Even the Republican National Committee has vowed to boycott 2024 presidential debates hosted by the nonprofit Commission on Presidential Debates, which has hosted presidential debates every election cycle since 1988.

The Tennessee governor, meanwhile, is giving little attention to underdog Martin, a Nashville pulmonologist and critical care specialist as well as a political newcomer. Martin, 47, said his experience treating dying patients early in the COVID-19 pandemic led him, in part, to run because of what he calls Lee's inadequate response to the pandemic.

"It is very frustrating because I think the people of Tennessee deserve a conversation about the state of affairs right now, which is largely tied to his record," Martin said in an in-person interview outside the state Capitol after he was formally endorsed by the Tennessee Education Association's political action committee.

Martin said when Lee was the GOP nominee in 2018, he and Democrat Karl Dean debated several times.

"He didn't have a record to defend, but now he does, and I think the people of Tennessee deserve that respect," Martin said. "And I'm committed to a respectful conversation about the issues. My problem is not with the man. My problem is with the policies. And we need to be able to come together and talk about that. And look, he's got time to talk to everybody else. He goes to fundraisers, he's been down in Williamson County on conservative talk radio" while participating in a 90-minute forum discussing politics.

"He's got time to do it. He's just choosing to avoid this conversation. And this is a broader strategy sent down from the 'home office'" for Republicans avoiding debates with Democratic opponents, Martin added.

He cited the 5th Congressional District in Middle Tennessee, where Republican Andy Ogles, a former head of the libertarian group Americans for Prosperity-Tennessee, just wrapped his term as Maury County mayor and is now the GOP congressional nominee and has declined to debate his Democratic opponent, state Sen. Heidi Campbell of Nashville. Republican candidates are doing that around the state, Martin said.

The New York Times reported candidates in 10 of the most competitive contests for Senate and governor have agreed to just one debate, and in at least four competitive contests, candidates did not agree to any debates. Although Lee and Martin are not taking part in a debate, they did both discuss the issues in interviews with the Times Free Press. 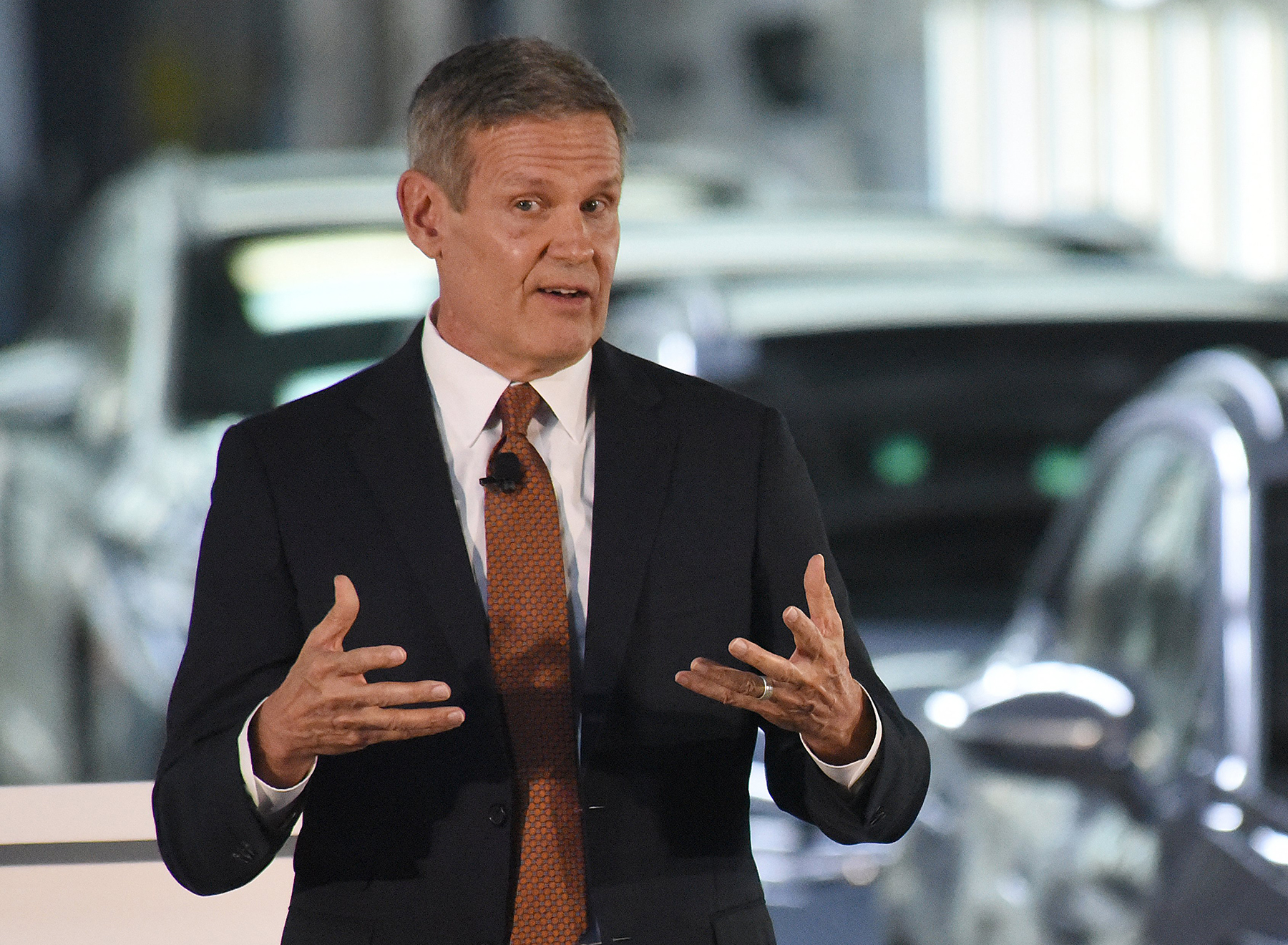 Asked what he considers his top achievements as governor, Lee said that when he ran in 2018, he talked about Tennessee being a place where people can "find a good job and have a good school for their kids and have a safe neighborhood."

"And we have made some significant steps in many of those areas," Lee said during the Times Free Press interview, adding there is more to come in a second term.

He said Tennessee during his first term fostered an environment that led to 70,000 additional jobs coming into the state, not counting jobs generated within the state itself. That's helped bring about record low unemployment as well as opportunities for people to find meaningful work, according to the governor.

Tennessee Department of Economic Development figures show the state saw 95,706 new job commitments from 2018 to 2022 on 545 projects with a capital investment of $31.23 billion. Among projects landed was Ford Motor Co. and Korean battery maker SK Innovation's agreement last year to build a $5.6 billion "Blue Oval City" in West Tennessee for a battery plant and assembly facility for the next generation of all-electric F-series trucks.

Lee said he has "pushed hard" to boost vocational and technical education in K-12 schools and Tennessee Colleges of Applied Technology. The new emphasis "provides a path for them that leads to meaningful work" and a focus that was lacking in the past, Lee said.

"And that's life-changing for a lot of kids," he said.

The governor also pointed to his successful effort to replace the state's 30-year-old K-12 education funding formula. It now provides a set amount of money per student instead of funding by categories, which was how the old formula was calculated. Critics argue the plan could potentially harm school districts because they might see fewer state funds over time. Changes were "overdue," Lee said.

As governor in 2019, Lee successfully pressed for "education savings accounts," designed to provide taxpayer-funded vouchers to students to attend privately run schools, including religious schools. He also was successful in getting the GOP-run General Assembly to pass a law creating a state charter school commission that can override local school districts when they reject a charter school application.

Last year, Lee -- a social, religious and economic conservative who prior to becoming governor worked as a mentor to prisoners -- won approval for a bill he championed that offers community-based alternatives to incarceration for low-level or nonviolent felons and helps inmates with education and life skills.

But it hasn't been all roses for Lee as he deals with Republican supermajorities that control the state House and Senate.

This year, House Speaker Cameron Sexton, R-Crossville, and Lt. Gov. Randy McNally, the Republican speaker from Oak Ridge, came back with a bill that cracked down on violent crime. Lee refused to sign it, saying the data does not suggest the "truth in sentencing" effort would be effective.

Sexton has vowed to bring legislation in 2023 to crack down further after a spate of violent crime erupted in Memphis this year, including a shooting spree by a 19-year-old man, later arrested, who livestreamed parts of it.

Also in Memphis, a female jogger was abducted and killed in September. The 38-year-old man charged with murder had been released from prison in 2020 after serving 20 years for a previous kidnapping. 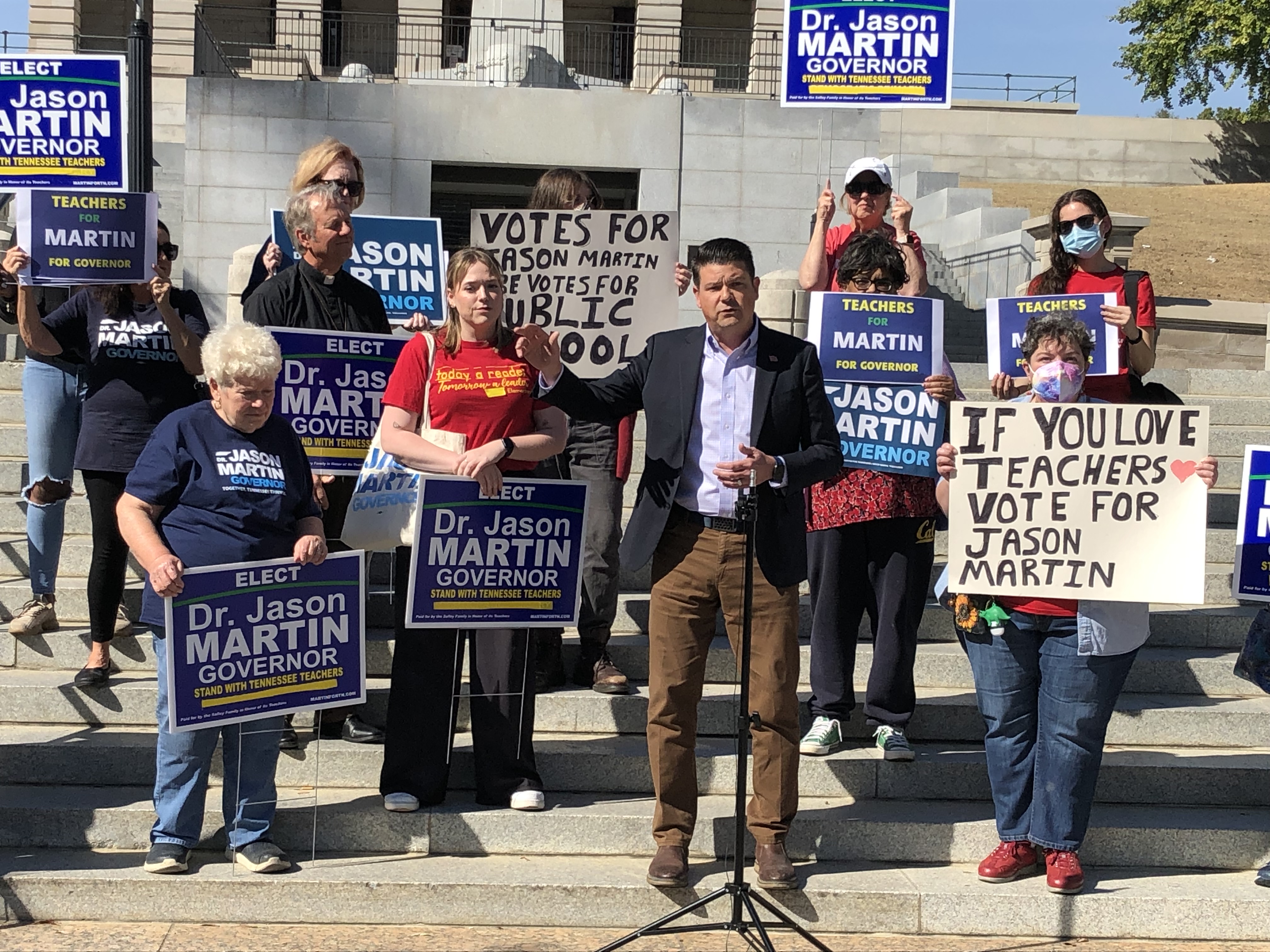 Martin has criticized legislative Republicans and Lee on school vouchers and refusing to expand Medicaid to an estimated 330,000 Tennessee adults under the federal Affordable Care Act. He has denounced the state's abortion laws that took effect earlier this year following a U.S. Supreme Court ruling overturning the landmark 1973 Roe v. Wade decision that made abortion legal.

Lee had previously signed a "trigger law" making all abortions illegal in anticipation of the Supreme Court ruling. It has a provision allowing any physician charged with peforming an abortion to offer an "affirmative defense" stating it was necessary to save the life of the woman or prevent irreversible harm.

He noted the law includes no exceptions for rape or incest.

"We live in Gov. Bill Lee's Tennessee where you can be forced to have your rapist's baby before your rape kit comes back from the underfunded Tennessee Bureau of Investigation crime lab," Martin said. "That is wrong, and we need to do something about it."

Lee rejected that, saying, "I believe that the most vulnerable in our community are unborn children. And I don't believe we can go too far in protecting the lives of unborn children. And that is what we have worked to accomplish in our state, to provide protection for those children and at the same time provide protection for women with a serious health condition. Doctors are given the opportunity and have the opportunity to provide services in the case of serious health conditions" if they are acting in "good faith."

He's a fierce critic of Lee's effort to partner with Michigan-based Hillsdale College on charter schools in Tennessee. The college, headed by conservative Larry Arnn, was engulfed in controversy after leaked video obtained by Nashville television station WTVF showed Lee and Arnn at a June gathering in Franklin where Arrn declared teachers are "trained in the dumbest parts of the dumbest colleges in the country."

A charter school organization linked to Hillsdale recently pulled its effort to win approval for its schools after several were rejected by Lee's handpicked charter school commission.

"It's about instilling an ideology, a right-wing ideology in our kids," Martin said last week as he rallied with teachers outside the Capitol. "And multi-communities across the state rejected Hillsdale and their local school boards rejected Hillsdale.

"And what has the governor done? He's set this board to hear appeals to try to inflict this curriculum on communities whether or not they want it, and that is wrong. One thing I can tell you all -- if Larry Arnn were to come to our community, and I was governor, and he was to look at that crowd and to say our teachers, 'You all went to the dumbest parts of the dumbest colleges in the country,' he would be shown the door. We're not going to put up with it. We can do better to support our communities."

Lee said the state has 106 charter schools in the state already serving 41,000 students.

"And those are children, for the most part, whose parents have made a choice to be in public charter schools," Lee said, adding that 91% are minority students. "I think it's really important to maintain those families' ability to make that choice."