To decarbonize and electrify America's economy, the head of the nation's biggest public power utility thinks several hundred new nuclear reactors may be needed in the next generation, including 20 or so new smaller reactors across the Tennessee Valley.

In a talk to business investors and nuclear power leaders this week, TVA President Jeff Lyash said the utility's initial efforts to build small modular reactors near Oak Ridge will serve as a model to construct more than a dozen other such reactors in TVA's seven-state region. The reactors will help provide around-the-clock, carbon-free energy needed to meet TVA's goal of operating a carbon-free power grid by 2050.

"I have no interest in building just one reactor," Lyash said during a presentation to the Atlantic Council in Washington, D.C., this week. "I'm interested in 20 reactors -- maybe more."

As cars shift from gasoline to battery power and homes and industries shift away from natural gas and propane to electricity use, Lyash projects electricity demand in the Tennessee Valley will likely jump by 50% to 100% above current levels within the next three decades. To meet the higher demand while phasing out its aging fleet of coal plants, Lyash said TVA is eager to expand renewable energy sources like solar, wind and geothermal while expanding nuclear power generation.

TVA has pledged to reduce its carbon emissions by at least 70% by 2030 and 80% by 2035. Lyash has an aspiration for TVA to be carbon neutral by no later than 2050 even as power demand could double from the growth of electric vehicles and economic expansion in the Tennessee Valley.

To replace coal, natural gas and other fossil fuels, Lyash said more nuclear power will be essential, especially to provide reliable, continuous power when the sun doesn't shine for solar generators or the wind doesn't blow for windmills to generate electricity.

"We have to preserve, extend and leverage the existing nuclear fleet, and we have to have new nuclear if we are going to solve these problems," Lyash said.

TVA and other utilities are planning to phase out most fossil fuel generation during the next couple of decades to help limit greenhouse gas emissions linked with global warming.

Clarence "Bud" Albright, a former undersecretary in the Department of Energy and current president and chief executive of the U.S. Nuclear Industry Council, said more nuclear power is essential for maintaining reliable and sustainable electricity service.

"When we look at the energy crisis we are in today, we see danger and opportunity," Albright told the Atlantic Council. "The short-term dangers are clear in Europe (where energy is getting more expensive and harder to produce). But there is an opportunity as we look to advanced nuclear power to do what no other clean energy source can do. We have zero carbon with reliable 24/7 power."

But over the past four decades, TVA completed less than half of the 17 reactors it once proposed to build. The federal utility invested nearly $10 billion in construction and financing expenses on the design or construction of the mothballed nuclear plants at Bellefonte, Phibbs Bend, Yellow Creek and Hartsville in Tennessee and Alabama that were never completed. The projected demand for the new reactors never materialized, and the costs of completing those 10 reactors exceeded their projected value.

Lyash said he is hopeful the next generation of advanced nuclear plants will be more cost-effective and efficient to build and operate, and he added TVA is being more deliberative in its approach to building any new reactors. 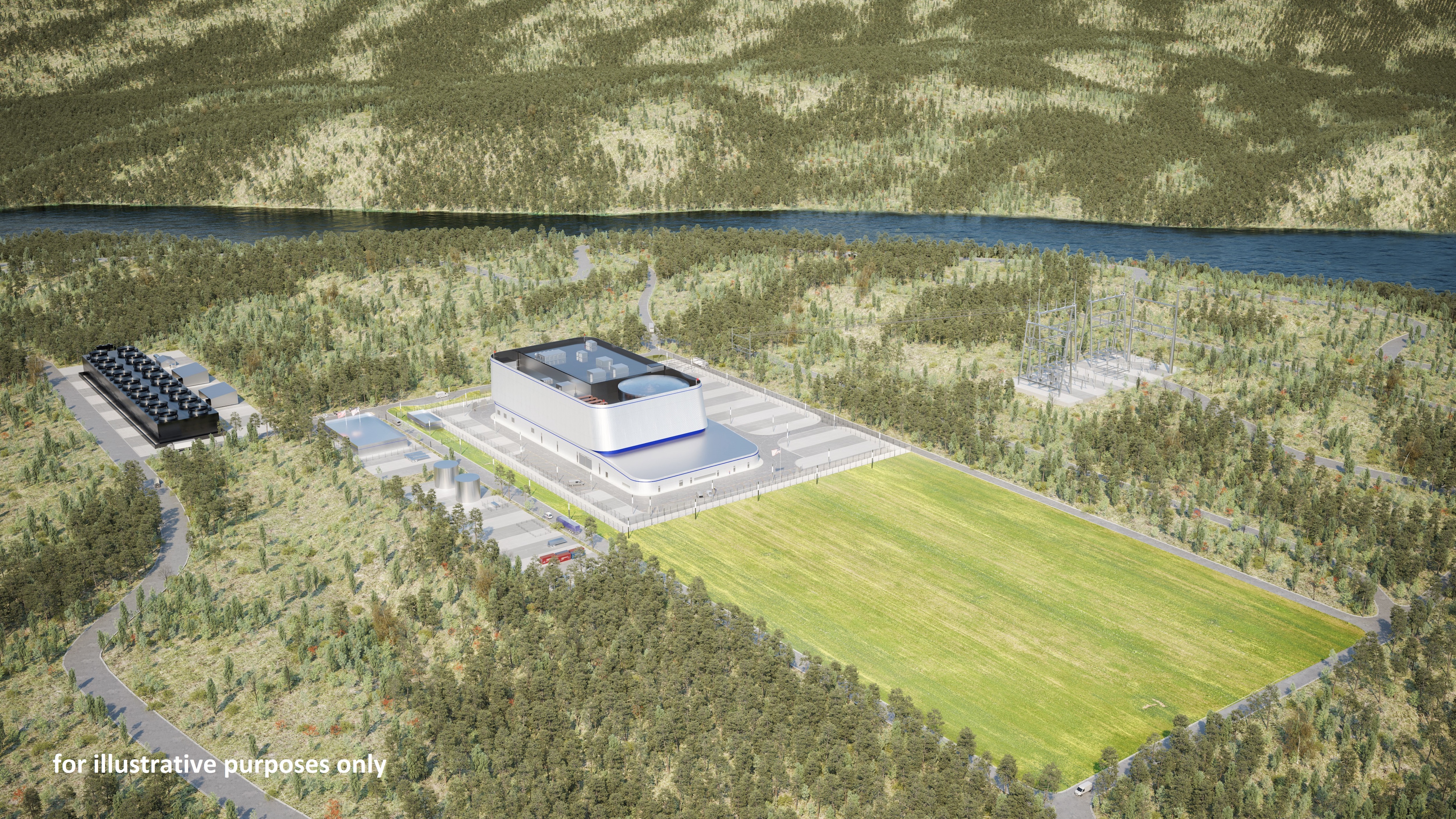 TVA / A drawing shows plans for a GE Hitachi BWRX-300 small modular reactor on the Clinch River near Oak Ridge. TVA President Jeff Lyash said he hopes the smaller reactors can be located across the Tennessee Valley.

But Paul Gunter, director of reactor oversight for at the anti-nuclear power group known as Beyond Nuclear, said TVA and other utilities should have learned their lessons from cost overruns and delays with nuclear power plants during the past half-century. After scrapping plans for 10 reactors it once planned and began building, TVA's last completed nuclear power plant -- the unit 2 reactor at Watts Bar -- took 43 years from design to completion.

The proposed new small modular reactors have yet to be fully designed and licensed, Gunter said in a phone interview.

"SMR presently stands for 'small mirage reactors,'" he said. "The technology is not ready, and given the history of the previous three generations of nuclear power, the industry refuses to recognize the common failure of nuclear power and the inability to meet cost and time schedules."

(READ MORE: TVA seeks to extend the life of its oldest nuclear plant for decades)

Gunter said the new advanced reactors being built at Plant Vogtle in Georgia are costing more than twice as much as initially projected and have taken years longer than planned to build even after the industry convinced Congress in 2005 to fast-track licensing and to provide tax credits, loan guarantees and other government assistance to build the plants.

Among more than 30 initial applications to build one of the Westinghouse AP1000 reactors, only the two units at Vogtle are still being built, Gunter said.

"For these so-called advanced nuclear units now being talked about, there are no guarantees that they have learned any lessons from the previous failures and the inability to control costs," Gunter said.

Lyash, a former nuclear plant operator who has headed the biggest public utilities in both Canada and the U.S., said TVA is using "a very disciplined, gated process, where at each gate in the process you decide whether to continue or to take an off-ramp."

"We want to be very disciplined in our approach," he said. "These units have to be delivered on schedule and on budget. And when they come into service, they have to operate at 95% capacity factor and do so safely."

Unlike previous generations, the small modular reactor will be fully designed before construction begins, and its modular design will allow key components in each reactor to be built in a factory setting and shipped to the reactor site.

"We've got to earn our place at the table with a competitive price -- stamping out plants on budget and on time," Jay Wileman, president and CEO of GE Hitachi Nuclear Energy, told the Atlantic Council.

GE Hitachi is working with several utilities on its BWRX-300 small modular reactor, including both TVA and Ontario Power Generation. Ontario Power and TVA have agreed to a development partnership for the new plants.

Ontario Power plans to deploy the BWRX-300 at its Darlington site as early as 2028, and Lyash said TVA hopes to build on the lessons learned with the smaller reactors being added at Darlington.