One afternoon in April 2005, David Carter was supposed to attend a seminar on Catholic canon law. He skipped it.

There were more pressing matters for Carter, now a pastor at Chattanooga's Basilica of Sts. Peter and Paul. Pope John Paul II had died, and cardinals seeking to elect a new pope deliberated inside the Sistine Chapel. In nearby St. Peter's Square, Carter found his seminary classmates -- a diverse cohort that reflected the global character of the Catholic scene in Rome, where they all studied.

The announcement that a new pope had been selected gave way to a "great moment of anticipation," Carter said by phone Tuesday. The announcement that it would be Joseph Ratzinger, to become known as Benedict XVI, gave way to screams of delight. Carter turned to embrace a fellow seminarian, a burly Scotsman, and the two jumped up and down in joy, he said.

"Everybody in St. Peter's Square was just thrilled that there was going to be this continuity with what we had known all our lives," Carter said.

Observers described the bookish Benedict, who in a nearly unprecedented move retired in 2013, as a reluctant pope. His death, announced by the Vatican on Saturday, is causing Chattanooga-area Catholics, from the Bishop of Knoxville to schoolchildren, to reflect on his historical role as a stabilizing and lucid intellectual force that, here and beyond, held space for old -- some say timeless -- traditions amid the encroachments of modern life.

Carter said he shares the worldview and pastoral impulses of Pope Benedict XVI. Richard Stika, named the third bishop of the Knoxville-based East Tennessee diocese by Benedict in 2009, said by phone Tuesday "a lot of the things that I teach are reflections of what Benedict taught."

Stika grew up in an experimental period for a Catholic church working to implement the vision of the Second Vatican Council, a 1960s effort to update church traditions and teaching styles in an increasingly secular world.

Benedict sought to limit what some saw as the excesses of progressives who, among other things, pushed to make rituals more inviting and to liberalize church policies on human sexuality. Observers say Benedict, who was the Catholic church's top doctrinal official under Pope John Paul II before taking on the role himself, drew hard lines where he felt it necessary in his campaign against what he called the "dictatorship of relativism." 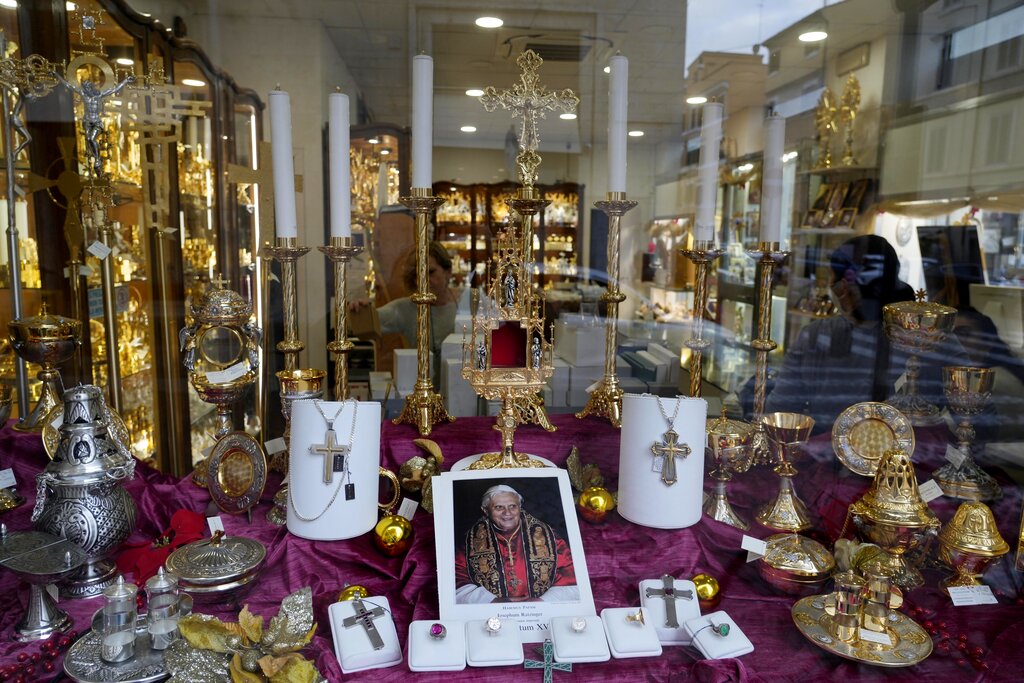 A picture of late Emeritus Pontiff Benedict XVI is displayed of a shop window selling religious items in Rome, Monday, Jan. 2, 2023. Benedict XVI, the German theologian who will be remembered as the first pope in 600 years to resign, has died, the Vatican announced Saturday. He was 95.(AP Photo/Gregorio Borgia)

One time, around 2012, Stika joined Benedict and a few other bishops at the Vatican. Stika recalls telling Benedict of the growing Latino population in the Diocese of Knoxville, prompting the pope, who was preparing for a trip to Mexico, to pepper Stika with questions.

As Stika moved to leave, he told Benedict of having recently read Georg Ratzinger's book, "My Brother the Pope." According to Stika, Benedict said, "How was it? I haven't read it yet." Stika kidded him, saying, "Now I know everything about you." As Stika turned to leave, he heard a faint voice. "Please pray for me," Benedict said.

Stika said he told the pope, "Every moment, whenever I pray, I will pray for you.'"

The next year, Benedict XVI resigned as pope -- the first to do so in nearly 600 years. But even as Pope Francis took over, Benedict continued to write.

"What I liked about Pope Benedict -- his teaching was very clear," Stika said. "He wasn't a conservative, and he wasn't a liberal. He was faithful."

Benedict's legacy lives on in the Chattanooga area today, not just within its religious leaders, but in the practices of the church.

In a 2007 letter, for example, Benedict developed a more permissive policy for priests to celebrate a traditional Latin Mass -- breathing additional life into a practice beloved by some that preceded the Second Vatican Council.

Carter became pastor at the Basilica of Sts. Peter and Paul in 2013, and the next year, responding to the request of parishioners, he said, he began conducting the Latin Mass once per month. For Carter, the ritual emphasizes the transcendent aspects of worship. It has become divisive in the Catholic church, however, as some of its supporters see it as superior or more authentic than its modern equivalent.

After services resumed following the early days of the pandemic, the Basilica's Latin Mass became a weekly practice. Today, every urban area of the diocese offers it, Stika said.

There are practical limits on any further spread.

But Pope Francis has also instructed bishops to somewhat limit the ritual. With the urban areas now covered, the diocese won't expand it further, Stika said.

Carter, wary of the ultra-traditionalist groups that question the legitimacy of today's Vatican regime, stressed he fully obeys and respects Pope Francis, has accepted the documents of the Second Vatican Council and seeks to implement its vision in the church. But he said that in recent years, owing to reasons he believes are too complex to reduce to one person or policy, a "sense of tumult, of disconnectedness, of being unmoored" has descended once more upon the church.

Local Chattanooga Catholic schools are discussing Benedict's significance in classes this week, officials said. And Stika will preside over a memorial Mass on Wednesday at the Cathedral of the Most Sacred Heart of Jesus, in Knoxville. It will be open to the public and livestreamed on YouTube.

Bishop Richard Stika will celebrate a memorial Mass for Pope Emeritus Benedict XVI at 7 p.m. Wednesday at the Cathedral of the Most Sacred Heart of Jesus, in Knoxville. All are welcome. The Mass will be livestreamed on the cathedral’s YouTube channel.