Every winter from mid-November to the end of February, around 25,000 sandhill cranes descend upon the Hiwassee Wildlife Refuge in Birchwood, Tennessee, about 40 miles north of Chattanooga.

Every winter since 2013, hunters also have descended upon the area, setting up camp on private lands surrounding the refuge and aiming to bag a sandhill crane or two as the birds migrate south.

Winter also brings the Tennessee Sandhill Crane Festival to the Hiwassee Refuge. The 32nd edition of the annual event is 8 a.m. to 4 p.m. Saturday and Sunday. The event is free. Shuttles run from the Birchwood School, 5623 Highway 60 in Birchwood. Shuttles are free and loop between the Cherokee Removal Memorial, the Hiwassee Refuge and the school. Only handicapped parking is allowed at the refuge.

WHY DO THEY COME?

Sandhill cranes have always passed through Tennessee on their way to South Georgia and Florida, where they spend the majority of winter, said David Aborn, who began studying sandhill cranes when he was hired as a professor at the University of Tennessee at Chattanooga in 1999.

In the 1990s, the Tennessee Wildlife Resources Agency began planting corn and other grains for waterfowl at the Hiwassee Wildlife Refuge, and more sandhill cranes started stopping there in increasing numbers each year as they migrated south, he said by phone.

"Cranes love corn," Aborn said. "If you plant it, they will come."

By the early 2000s, between 10,000 and 20,000 sandhill cranes were spending the entire winter at the Hiwassee Wildlife Refuge, he said.

An average of 29,000 cranes spent the winter in Tennessee over the past five years, according to the agency's website.

Crops, including corn and sunflowers, planted in fields on the refuge provide food for the cranes, and the Tennessee Valley Authority lowers the water level around the refuge during their migration so the birds can roost in the mud flats overnight, Mime Barnes, regional outreach and communications coordinator for the Tennessee Wildlife Resource Agency, said by phone.

'RIB-EYE OF THE SKY'

Before 2013, hunting sandhill cranes -- sometimes referred to as the "rib-eye of the sky," owing to their reputation as the tastiest species of migratory bird -- was prohibited in Tennessee.

Sandhill cranes were hunted to near-extinction in the 1800s, but the population has since rebounded to more than 1 million in North America.

The cranes can cause problems for farmers of crops such as wheat that the birds feed upon, Barnes said. That's one reason the state agency initiated the hunting of sandhill cranes.

The most recent fall count, in 2021, of the Eastern population of sandhill cranes, the population that includes those that migrate through Tennessee, was 90,029, about 5% lower than the 2020 count, according to the U.S. Fish and Wildlife Service's 2022 report on the status and harvest of sandhill cranes.

For the 2022-23 season, the Tennessee Wildlife Resources Agency issued two kill tags each to 1,250 individual hunters, with each tag allowing a hunter to kill one sandhill crane. Tag limits are established at the federal level, and 2,500 was also the limit a year ago, Barnes said, based on information provided to her by Jamie Feddersen, Tennessee Wildlife Resources Agency migratory game bird coordinator.

The number of cranes harvested in Tennessee last season was 484, according to the 2022 federal report. 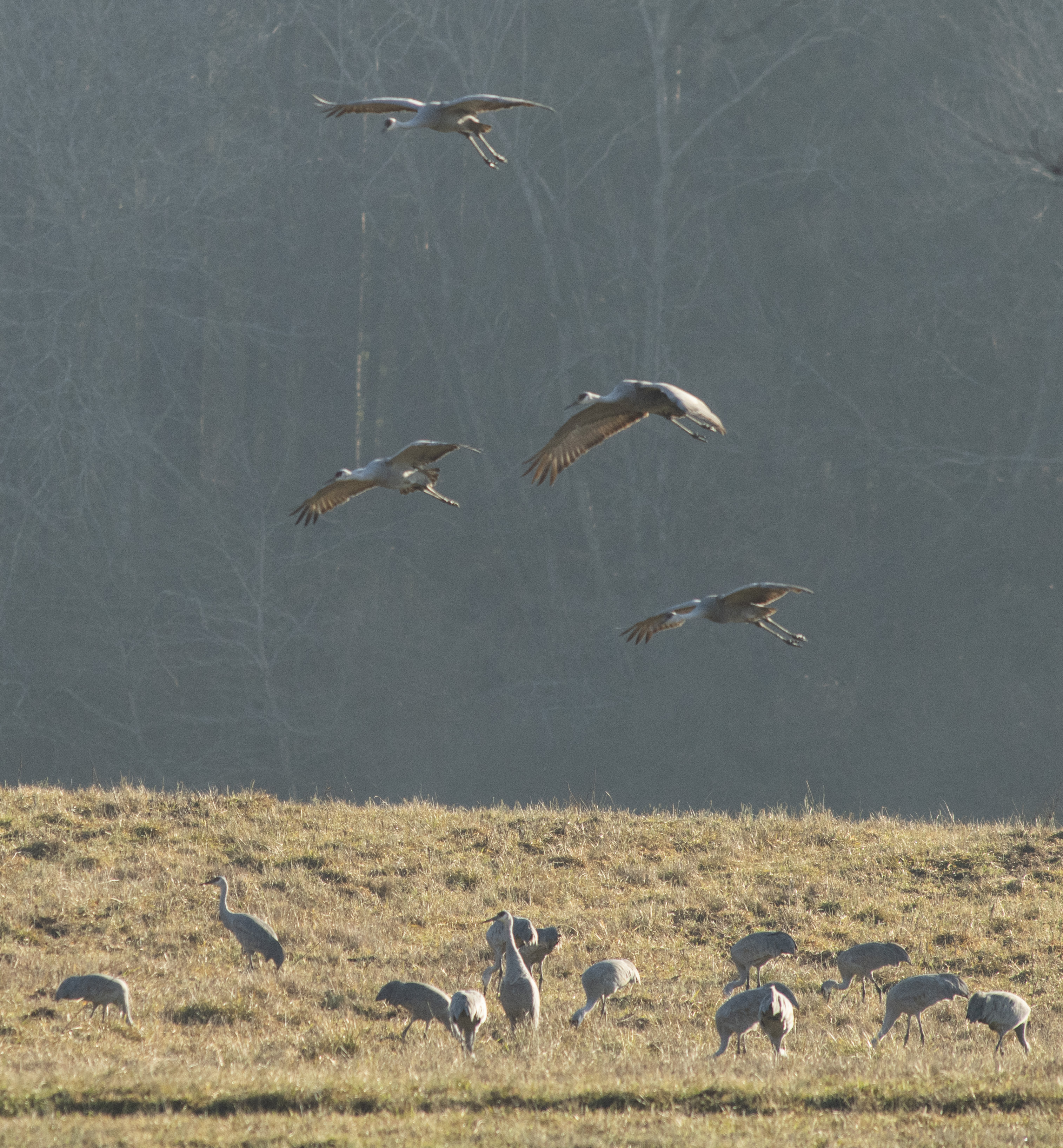 The sandhill crane population is monitored in Tennessee through a weekly survey, and the peak count could influence the number of tags issued the following year, Barnes said.

The 2022-23 hunting season for sandhill cranes in Tennessee runs from Dec. 3 through Jan. 31, with a break Jan. 13-15 that falls during the Tennessee Sandhill Crane Festival.

Hunters typically set up decoys in agricultural fields where they have spotted cranes feeding in the afternoon, then camp out overnight in hopes that the birds -- which are known to be wary and difficult to fool -- return the next morning, according to the state Wildlife Resources Agency's website.

"They can be pretty wary," Aborn said of sandhill cranes. "Hunters will say that they're big and they don't fly very fast, but they're still not a very easy species to hunt."

No hunting is allowed on the refuge, but private land surrounding the refuge and its fields of feed is fair game.

"We don't have any way of knowing who's hunting on private property where," Barnes said.

No boats are allowed outside the river's main channel during the winter months, and hunters legally cannot shoot the birds from the water. Birds wading on the shore of the refuge are off-limits regardless of where the hunter is shooting from, Barnes said.

"It's a refuge for a reason," she said, adding that the bird's nesting areas within the refuge are roped off during the annual sandhill crane festival, the only period during hunting season that people are allowed on the refuge.

Because hunting season encompasses much of the winter, it prevents Aborn and others from doing research on the refuge when the cranes are there.

Aborn was radio-tracking and doing detailed counts of the cranes within the refuge before hunting began in 2013, but now his access to the refuge is restricted and his research has stalled, he said.

Fedderson has expressed interest in resuming research of the cranes, including wintering behavior of the Eastern population of sandhill cranes, a population on which little research has been done in comparison to Western populations, Aborn said.

Aborn's previous research has revealed a few differences in the behavior of the Eastern population from the other five sandhill crane populations in North America.

"I've seen some indications that family groups break up during the winter here," Aborn said. "Normally in other populations, it seems like the family groups don't break up until they start heading north again, but in some of the radio tracking I did, I found several family groups where one parent would continue on to Florida, but the other parent and the chick would stay here in Hiwassee."

Sandhill cranes, which typically live at least 20 years, mate for life. They don't successfully breed until they are 5 to 7 years old and have one of the lowest reproductive rates of any North American bird, with only one nest in three producing a chick that survives to migrate in the fall, according to the Tennessee Wildlife Resource Agency's website.

Hundreds of sandhill cranes can be seen in all directions from the Hiwassee refuge at any time of day during the sandhill crane festival, and spectators also may spot white pelicans and endangered whooping cranes that pass through Tennessee as they migrate south, as well as bald eagles, which prey on sandhill cranes, Barnes said.

Aborn is speaking about his research at 12:30 p.m. Jan. 21 at Reflection Riding Nature Center. Attendees can visit the two sandhill cranes living on-site before heading to the refuge in Birchwood to view the migrating cranes.