Even if Brandon and Wendy Buckner never set foot outside The Hot Chocolatier, their specialty shop on Market Street, they could probably mark the changing of the seasons.

Crowds asking for pumpkin spice everything? September has arrived. Back to searching for chocolates? October.

November brings another surge -- visitors attending Ice on the Landing at the Chattanooga Choo Choo hotel, just across street. And, of course, Black Friday shoppers.

Then, they say -- there's Christmas. Not only is December The Hot Chocolatier's biggest month of any given year, but sales in December 2021 were about double those of February, the shop's second-best month.

"Christmas will get us through the slow season," from about Easter into September, says Wendy. "We always have last-minute customers, but I love so much the people who come in October talking about Christmas, thinking of Christmas parties.

"And corporate giving becomes this big, massive thing," she says, noting that the shop put together more than 1,1o0 gift baskets in 2021.

The Buckners say that this holiday season will be the first since 2019, just prior to the global pandemic, that the shop's indoor seating will be open. Brandon says they were forced to close from March to June in 2020, and the business is still recovering.

"We were going gangbusters until the pandemic hit," he says. "It messed with us, and we're still easing back in."

And finding good help post-pandemic "has been insane," says Wendy, who's quick to credit the current staff for doing what's necessary at a given time.

The Buckners, both chocolatiers, have been crafting artisan chocolates, gourmet desserts and pastries in their current location since early 2014, having moved from another location on the Southside. But they remember well their shaky start in North Chattanooga's Business Development Center incubator.

"We were told our business wouldn't fly," Wendy recalls. "That if I didn't already have the seed money, I wasn't likely to get it. I left there heartbroken."

But the Buckners didn't quit. They say they found a champion in Kevin Maxfield, then the director of the BDC incubator, and managed to cobble together their startup.

"We ended up being the first business in there with a commercial food license," Brandon says. "Because we were different than hot food, we didn't have to go through a bunch of stuff we would have had do if we were deep frying or something like that.

"And there was another chocolate shop that closed, so people were driving from the Hamilton Place area to our space in the incubator."

Wendy says that, after a couple of moves over the years, she wants The Hot Chocolatier's current location to be its "forever home." But the building has new owners, she says, leaving her, her husband and their business "kind of in limbo." But they have an ace up their collective sleeve.

"We bought a building in St. Elmo before the pandemic," Brandon says. "We want to make it a retail location with a bakery and café in front."

Wendy adds that they've renovated what used to be a hair salon, including building out a kitchen – where staff is producing all of the shop's chocolate. She adds that they plan to open the new location as soon as they can hire enough employees.

"(A second location) was always in our minds, because we've learned the hard way about what can happen when you don't own your own building," she says. "Our first stop after the incubator was on Main Street. Right when we opened, the building changed hands. (The new owners) tried to get us to leave and we had to get a lawyer to help save our lease.

"If we ever have to move from where we are, I'd still want a downtown presence. Our preference for a second location would be St. Elmo – and eventually supply chocolate to multiple locations." 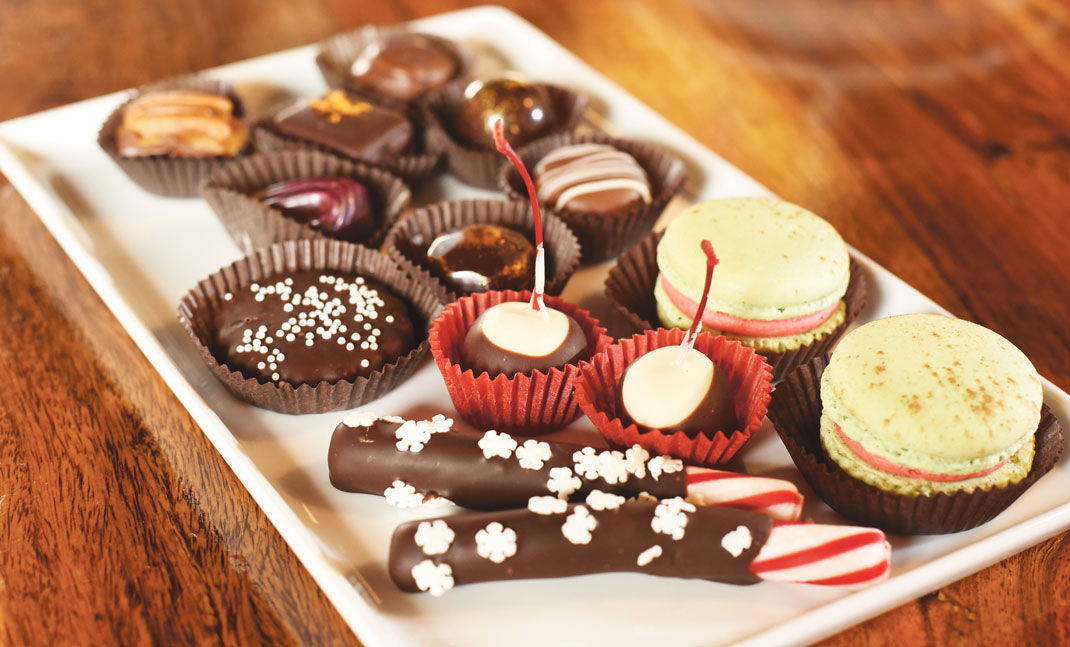 Photography by Matt Hamilton / A selection of holiday chocolates and other treats at Hot Chocolatier.