Three years ago when the Associated General Contractors was looking for a new training ground to get more workers to go into construction, Chattanooga City Councilman Chip Henderson suggested the local building association consider an abandoned elementary school in East Chattanooga.

When local leaders first viewed the former Mary Garber school on Roanoke Avenue, the 68-year-old facility was in such disarray that the school system was able to use only half of the 28,000-square-foot building for storage.

But on Friday after an $8.4 million renovation during the past year, the refurbished building was officially opened as a Construction Career Center that community leaders heralded as a model for the nation. The new center was developed and built with public and private funding and will provide needed training in high-demand carpentry, masonry, plumbing and electrical jobs for high school students and adult learners.

“This, like a lot of Chattanooga, is a rebuilt story where we have brought new life and purpose to an old asset,” interim Chattanooga Chamber of Commerce President Charles Wood said during a grand opening celebration at the center Friday.

In the dual enrollment program between Hamilton County Schools and Chattanooga State Community College, 80 students are already enrolled this fall from Howard and East Ridge high schools to earn one of five different construction certifications to go to work right out of school or pursue more advanced building trade skills. Next year, the school expects to enroll 160 high school students from Howard, East Ridge and Brainerd and 40 other adult learners to gain needed skills to help build infrastructure.

“This is one of the most impressive facilities that I have seen across the country,” Steve Sandherr, the CEO of the Associated General Contractors of America, told the Chattanooga Times Free Press during a visit to the school on Friday. “This project is an incredible example of a state-of-the-art training facility with broad community support that provides students the opportunity to look at multiple career opportunities in areas where we clearly need more workers.”

Sandherr said there are currently 350,000 open construction jobs across the country, and with the average construction worker now over the age of 40, at least 40% of the current U.S. construction workforce is expected to retire over the next decade, according to projections by the Associated Builders and Contractors.

Such jobs usually have above-average pay levels, as the average construction worker in America is now paid about $35 an hour.

Hamilton County Mayor Weston Wamp, who is also on the Tennessee Board of Regents, said the vocational training offered at the new center will lift the lives of its students and help the building industry fill its future talent needs.

“This is just the beginning,” Wamp pledged.

Wood said the Chamber is already making plans for expansions in such vocational training efforts to meet future workforce needs.

The Construction Career Center represents the first partnership in Tennessee between a community college, a local school district and a nonprofit training program and was funded with $2 million in grants each from the city, county and state, along with another $4 million of contributions from local foundations and private donors.

The school’s inner-city location allows many students to attend who wouldn’t otherwise be able to get to the vocational training now done at the Sequoyah High School in Soddy Daisy, and the facility should help spur the revitalization of one of the city’s lower-income neighborhoods. Already, the Nippon Paint Co. is building a $61 million plant next to the Construction Career Center on the site of the former Harriet Tubman housing project. and Councilwoman Marvene Noel, of Orchard Knob, said she is hopeful for other development as part of the “East Chattanooga Rising” effort started by former Mayor Andy Berke. 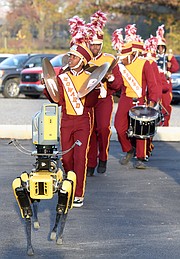 U.S. Rep. Chuck Fleischmann, R-Ooltewah, said support for vocational training is gaining support across all political perspectives and is needed to balance the emphasis on 4-year college programs in the past which were not necessarily suited for all people.

Fleischmann conceded that in his own education he was strong in book learning but struggled in high school classes in building with his hands.

“We know that these students here at this Construction Career Center have a God-given gift for their skills and their talent,” Fleischmann said. “Let’s lift them up like we do for those students getting the top score on the ACT exams. I want every person in America to have their skill recognized and we need these students to help us build America.”

Chattanooga Mayor Tim Kelly said the Construction Career Center offers the potential to change the lives of students enrolled in the program by giving them a pathway for higher-paying jobs. Kelly, who campaigned for mayor by promoting his “One Chattanooga” plan to bring the community together, said the widespread support for the center from the state, city, county, AGC, foundations and private donors underscores the support for new educational pathways.

“In trying to close the gaps in our community, it really must start with education to give people the marketable skills to make upward mobility possible,” he said. “This represents a huge step forward for our community.”