A looming local ordinance banning abortion clinics, daily protesters and a lawsuit by her landlord do not faze Diane Derzis, owner of the newly established Bristol Women's Health clinic about a mile across the Tennessee border in Virginia.

Since it opened in July, Derzis' abortion clinic has also drawn condemnation from the local Catholic Diocese and evangelical Christian groups -- as well as hand-wringing from some in the area business community, concerned that the city, long-touted for its central location at the convergence of three state borders, will now be viewed as an abortion destination.

Derzis said none of that concerns her.

"I don't need a welcome mat from anyone in this city. We pay taxes. They take them," she said.

Derzis, 68, has spent a lifetime working to provide abortion access in clinics across the South, a vocation that took root when she was a 20-year-old married woman who sought out her own abortion. She owns three other abortion clinics in Columbus, Georgia; Las Cruces, New Mexico; and Richmond, Virginia.

Until this summer, Derzis also owned an abortion clinic in Jackson, Mississippi -- the last abortion clinic in a state that no longer has any left. Her fight to keep that clinic open landed in the Supreme Court last summer in a case – Dobbs v. Jackson Women's Health Center -- now memorialized as one that a majority of justices used as a vehicle to overturn nearly 50 years of abortion rights established by Roe v. Wade.

"I guess I must love the chaos," Derzis said in an interview last week. "But this is nothing compared to what women have to go through to obtain this procedure."

Derzis' latest fight is defending a lawsuit brought by her Bristol, Virginia, landlords, who contend that they had no idea when they leased their building it would be used as an abortion clinic -- a service they are morally opposed to, according to their lawsuit.

"It's absurd. If that was a concern, they should have done their due diligence," said Derzis, noting the clinic had previously been just a mile away on the Tennessee side of the border that splits the city of Bristol in two.

It is not the only bump along the way in the rollout of the new clinic, which moved to its new Virginia location in late July in anticipation of Tennessee's ban on abortions that came one month later.

Dr. Wesley Adams had operated the Bristol Regional Women's Center in Bristol, Tennessee, for decades -- the only abortion provider serving a broad swath of Appalachian communities in Northeast Tennessee and surrounding states. He scouted the building in Bristol, Virginia, picked up the phone and called Derzis. 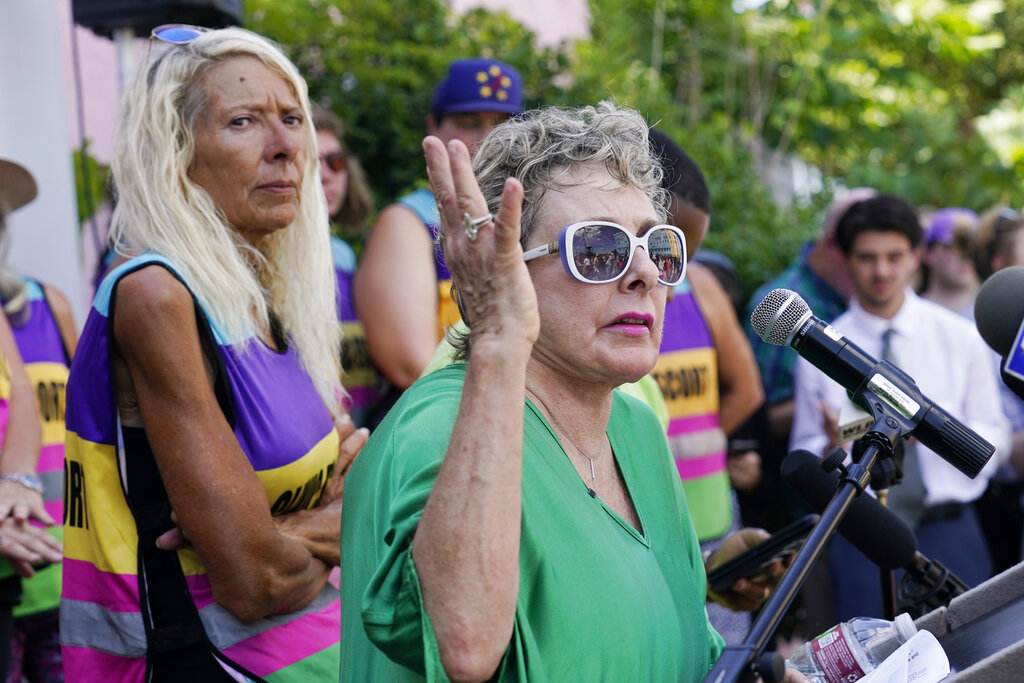 "I met Wes 30 years ago, but we had not seen each other in many, many years," she said. She said she didn't hesitate to partner with Adams on the new clinic.

"A marriage was made," Derzis said. "Then they started in on Wes."

Barry Staubus, the district attorney in Sullivan County -- where Adams' Tennessee clinic was located -- has warned Tennessee doctors they could face prosecution if they participate in abortions performed out of state.

Adams, who could not be reached for comment for this story, sought legal advice, but "nobody knew what was going to happen," Derzis said.

Adams left the clinic in Derzis' hands, but many of his former volunteers and staff now work at the new clinic, she said. The absence of Adams, a licensed obstetrician who performed abortions, is not just the loss of a business partner. It has added to Derzis' ongoing challenge of recruiting and retaining physicians at the clinic.

With access to abortion limited or nonexistent throughout the South, the clinic in its first six months has provided abortions to patients from Mississippi, Louisiana, Texas and Tennessee, she said.

(READ MORE: What the data says about abortion in the Chattanooga region)

Her staff has also had to deal with protesters outside its work and other disruptions to day-to-day operations, she said.

"We had a UPS man who refused to deliver packages recently, and I hope he lost his job," she said. "People need to think. If he's a Seventh-day Adventist, could he refuse to deliver supplies to a hospital?"

Patients often have to make their way past protesters outside the building, some organized by The Family Foundation of Virginia, a conservative organization that helped draft a resolution barring future abortion clinics in Bristol and the surrounding county.

The resolution, which is expected to be considered at Bristol, Virginia, City Council meeting February, would keep the Bristol clinic from expanding or relocating, but Derzis dismissed its impact on her clinic.

"It's a dog and pony show," she said. "It's also the best advertising we could get. And as a business owner, it makes us queen bee here -- the only abortion provider in the area."