When Puerto Ricans belt the name Roberto Clemente in song, they want the world to understand their pride, unity and culture. Clemente, for them, is the pinnacle of what it means to be a true Puerto Rican.

The baseball legend's name is in their songs. Children read about his story in school. His picture hangs in the houses of many Latino ballplayers.

"When we're being challenged and they're trying to figure out who we are, the answer is we all wear No. 21," said Luis Clemente, Roberto's middle son. "We are Roberto Clemente, so you know who we are. This is the face of what makes a Puerto Rican."

Fifty years after his death, Roberto Clemente, the skillful outfielder who played all 18 of his MLB seasons with the Pittsburgh Pirates, remains one of the most revered figures in Puerto Rico and Latin America. His graceful flair and powerful arm were unrivaled in his era, but his humanitarian efforts are perhaps his greatest legacy. Half a century after he played, many of today's Latino baseball players credit him for paving the way.

"The name Roberto Clemente is something that fills us with passion and admiration," said Miami Marlins pitcher Sandy Alcantara, who was born in the Dominican Republic. "... He was one of the Latin players that did so much for us here in America — not only here, but in all of Latin America."

Clemente's life ended at age 38 on Dec. 31, 1972, when his plane crashed off the coast of Puerto Rico as he was delivering relief supplies to earthquake victims in Nicaragua. He died with exactly 3,000 regular-season hits, four National League batting titles, 12 Gold Gloves, an MVP award, two World Series championships and 15 All-Star appearances.

Months later, he was elected to the National Baseball Hall of Fame, the Baseball Writers' Association of American having voted to waive the standard waiting period of five years between a player's last MLB appearance and first time on a ballot. 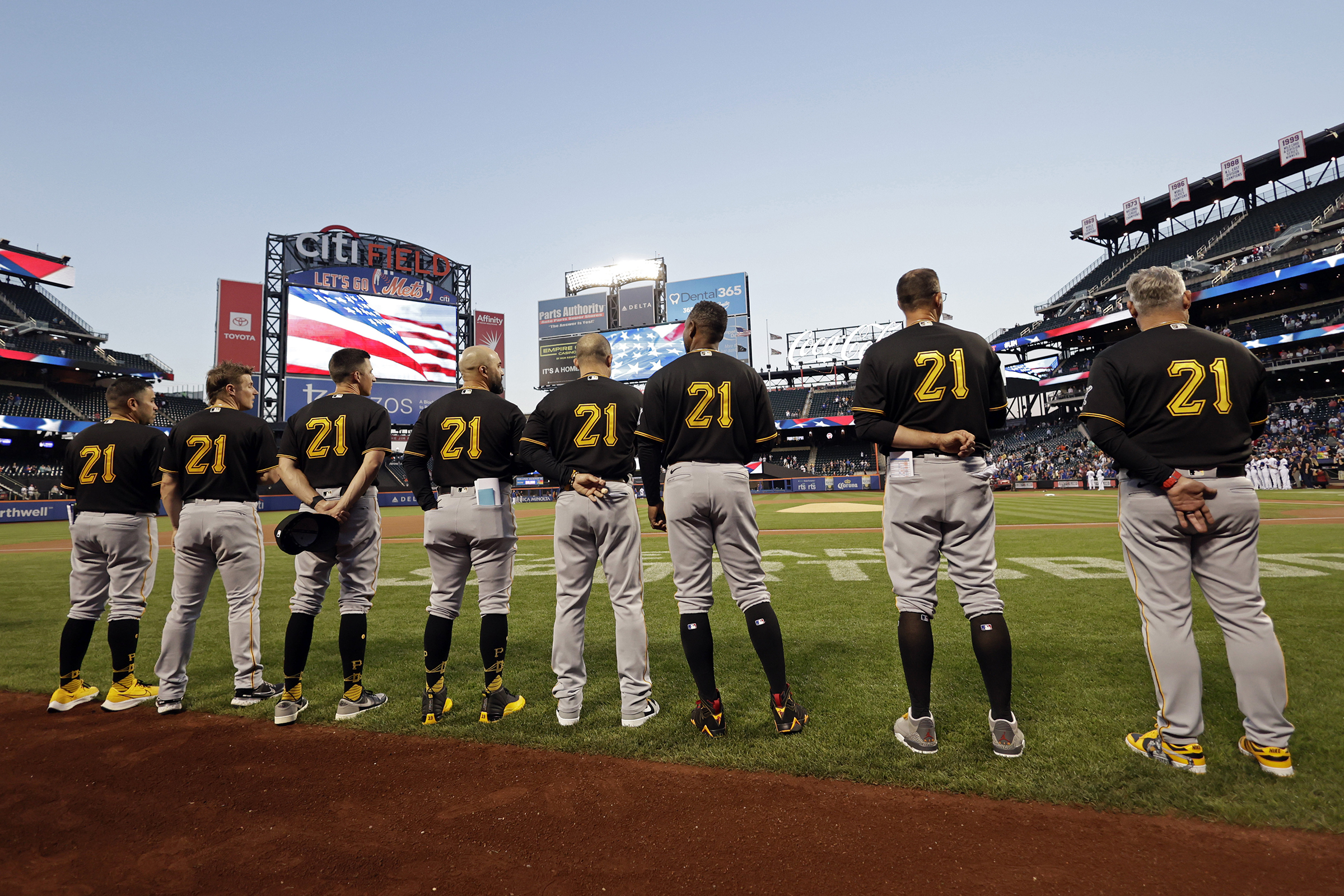 AP photo by Adam Hunger / Members of the Pittsburgh Pirates, wearing No. 21 in honor of the late Roberto Clemente, stand for the national anthem before a game against the host New York Mets on Sept. 15.

He was passionate about his Puerto Rican roots, and he spoke loudly about the racism he experienced as a Black Latino during a career that paralleled the civil rights movement.

"That was an expression of Clemente's angst of how many saw him," said baseball historian Adrian Burgos Jr., who focuses on the experience of Latinos in baseball. "Outside of that superstar ballplayer, they saw a Black man, a Black Latino, when he began to speak."

Clemente entered the majors after Jackie Robinson broke the sport's color barrier, and he was unprepared for what he faced when he left Puerto Rico.

According to demographics data compiled by the Society for American Baseball Research, white players made up 90.7% of MLB players when Pittsburgh selected Clemente from the Brooklyn Dodgers in the 1954 Rule 5 draft. African American players made up 5.6%, while Latino players made up 3.7%.

When Clemente reported for Pirates spring training in Florida, Black players weren't allowed to eat in the same restaurants as their white teammates after games and often had to wait for food to be brought back to them on the bus.

Clemente refused to be treated like a second-class citizen, and he demanded the same mindset from his Black teammates.

"He would even tell the rest of his teammates, 'Those of you who eat food from this place, we're going to go at it,'" Luis Clemente said. "And they'd say, 'Roberto, we're starving. We have to eat something.' He'd say, 'I don't care. ... If I'm not good enough to be served food at that restaurant, then that food is not good enough to feed ourselves.'"

Clemente understood the impact of his voice, which he used to denounce racism, often in his native Spanish. His statements were translated in broken English. His pride and demeanor were often misunderstood.

"There's all kinds of cultural dissonance in terms of a sense of who he is and the more traditional take on ballplayers for these taciturn, tobacco-spitting white guys," said Rob Ruck, author of "Raceball: How the Major Leagues Colonized the Black and Latin Game."

Clemente spoke about political and social issues with Martin Luther King Jr. He was passionate about creating equal access for Latinos and often went back to Puerto Rico to host free baseball clinics for underprivileged kids.

The Roberto Clemente Award is given each year to a Major League Baseball player for charitable work in the community. Los Angeles Dodgers third baseman Justin Turner was the 2022 winner. 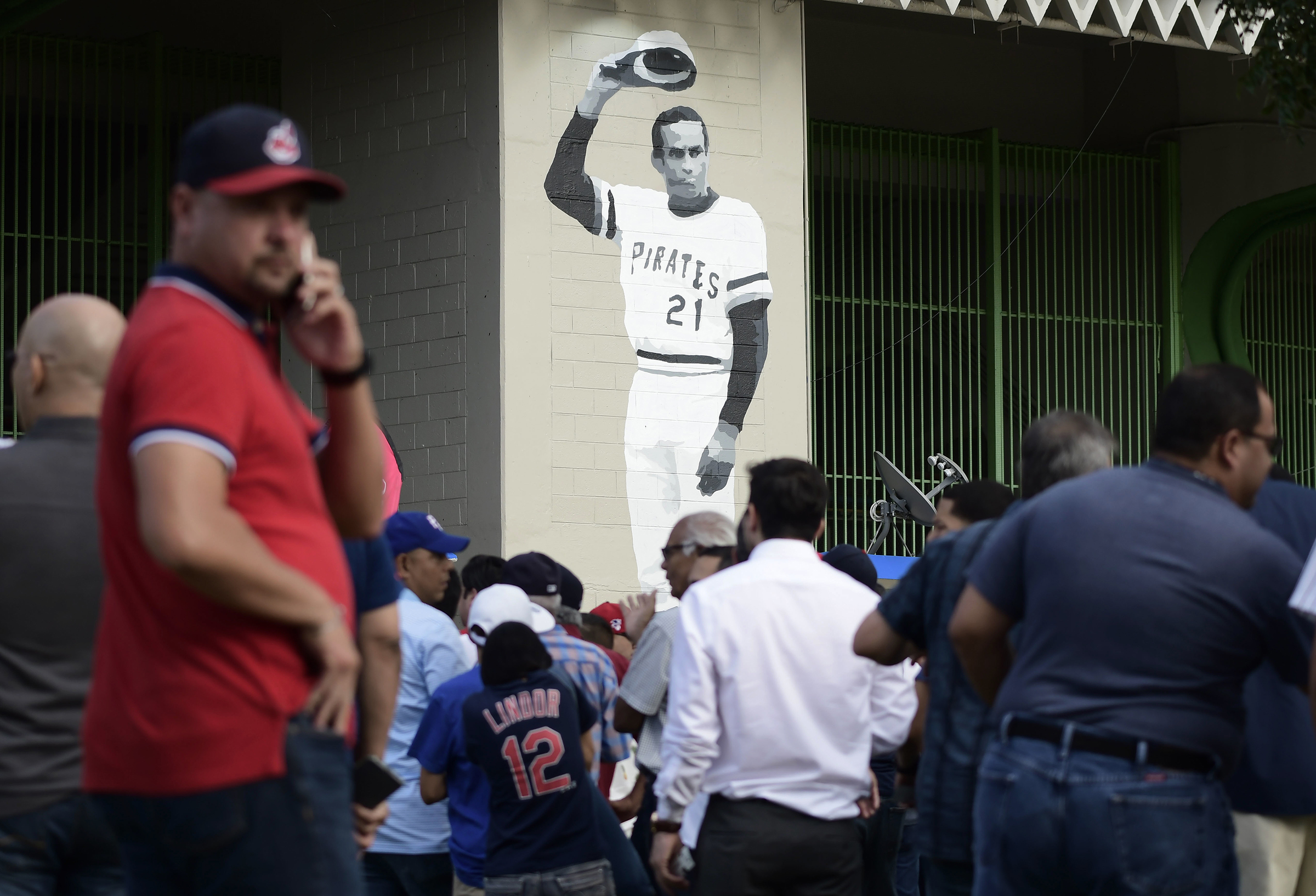 AP photo by Carlos Giusti / A mural of Puerto Rican MLB legend Roberto Clemente decorates Hiram Bithorn Stadium, where fans wait to enter for the finale of a two-game series between the Minnesota Twins and the Cleveland Indians on April 18, 2018, in San Juan, Puerto Rico.

Clemente's dedication to humanitarianism lives today through his family and the Roberto Clemente Foundation, which delivered food and aid to families in Puerto Rico when Hurricane Fiona ripped through the island this past September.

"That is the true Clemente legacy," Luis Clemente said, "is how you help others and how you make others understand how important they are in society."

The same can be said for today's Latino players, he added, as he feels their dedication to their home countries started, in part, with his father.

"Dad set the example of being thankful for what God provides," Luis said, "for the opportunity of becoming a Major League Baseball player. ... These players for the most part, they have had it rough. They understand what living in need is, and they know how to share their blessing."

On opening day in 2022, 38% of players on active 30-man rosters were people of color, per the Institute for Diversity and Ethics in Sport. The percentage of African American players (7.2%) is the lowest it has been in more than 30 years, while the number of Hispanic and Latino players (28.5%) continues to increase.

On Sept. 15, when the league celebrated its annual Roberto Clemente Day, the Tampa Bay Rays made MLB history by starting nine Latin American players against the Toronto Blue Jays.

Young stars such as Atlanta Braves right fielder Ronald Acuña Jr., who is from Venezuela, have helped usher in a livelier era for MLB, one in which boisterous Latino players are more comfortable than ever showing off the energy and flair more typical in their home countries than in the U.S. And yet Latino players still confront longstanding criticisms that any eccentricity they bring is too much.

"The continuing tension that Latino players encounter is this notion that is rooted in an imagined past," Burgos said, "and that is 'Play the game the right way.' Much of that comes out of the culture of Major League Baseball during its segregated era, where it was only white American players that were in the league."

Because of his impact, many people believe Clemente's No. 21 should be retired leaguewide. Only Robinson's No. 42 is retired on every MLB team.

"For me, Clemente was a figure of political resistance," Ruck said. "He was also a figure to me that captured what sport can be in its best-case scenario, which is a democratic arena accessible to all."