Jenny Smith's rise to become one of the top open-water swimmers in the world began in her school library as a child in Carmel, Indiana.

Smith was already a passionate swimmer, competing in age-group and high school swim meets in what was and remains a hotbed of swimming in the United States. Carmel High School is a nationally known force in prep swimming, regularly winning Indiana state championships. Smith had already found her passion in swimming at an early age.

"I've always had an affinity for the water," she says. "It's where I feel at home."

But it was in the school library where Smith discovered a book about Gertrude Ederle, the first woman to swim across the English Channel. Ederle, who was known as the "Queen of the Waves," completed her English Channel swim on Aug. 6, 1926. She was also an Olympic gold medalist in 1924 and held world records in five swimming events.

Even Ederle would be impressed by Smith, who this summer became the first American ever to complete Enduroman Arch to Arc Ultratriathlon, becoming the 49th of only 50 people ever to complete the grueling event.

The Enduroman Arch to Arc Ultratriathlon begins at the Marble Arch in London's Hyde Park and takes athletes on an 87-mile run to the English coast at Dover, England, followed by a swim of more than 21 miles across the English Channel to the French coast, and ends with a 180-mile bike ride from Calais, France to the Arc de Triomphe in Paris.

It is considered the hardest triathlon on the planet, and Smith dominated the event, setting the women's non-wetsuit world record for the event, finishing the journey in 72 hours.

Swimming is an integral part of Smith's life, and she says that in many ways the water is where she's most comfortable.

The Arch to Arc isn't Smith's first major accomplishment in the water, or even her first time to swim the English Channel. She first crossed the Channel in 2017, in an effort inspired by the loss of her swim coach and friend, Anne Cleveland, who passed away two months before Smith's first English Channel swim.

"It was a euphoric and surreal swim," Smith says.

The 2017 English Channel crossing was the first leg of the Triple Crown of Open Water Swimming for Smith. She also crossed the 20-mile Catalina Channel, from Santa Catalina Island to Rancho Palos Verdes in California in 10 hours and 45 minutes. Then, she became the 174th person to complete the trio of epic swims by swimming 20 Bridges on June 30, 2018, a 28-mile circumnavigation around Manhattan Island, swimming the East River, Harlem River and Hudson River in eight hours and 52 minutes.

Smith says she uses her training in yoga and meditation to swim distances some might think impossible. She is a certified yoga instructor.

"It's all mental. It really is, and that's the draw for me," she says. "That's why I do these things. You're pushing yourself to a place you can't get to any other way. You only have yourself. There's no cell phones, no dogs barking. It's complete deprivation, and that's fascinating to see what comes up. You've got to deal with your dark side. The challenge for me is just seeing what comes up and how I handle it. It's the ultimate meditation, and it's a moving meditation."

Smith has lived in Chattanooga for 22 years, raising two sons Max and Zane with her husband, Will. She is the founder and coach of the Baylor Tri-Masters Swimming club for adult swimmers in the area. Finding a balance in her competitive goals and family obligations is a challenge Smith takes seriously. She says that finding that balance is hard in a sport that requires lots of training, travel and time.

"I think it can be a very selfish sport, so you have to be careful," she says. "There has to be some humility and humbleness to it. So, for me training is more just about a complete lifestyle. It's a lifestyle and has been since I was 8 years old probably."

To maintain that balance, Smith includes her family in her sport where she can. Her sons joined her for the 2017 English Channel crossing, doing their summer reading in the pilot boat that accompanied her on the swim. 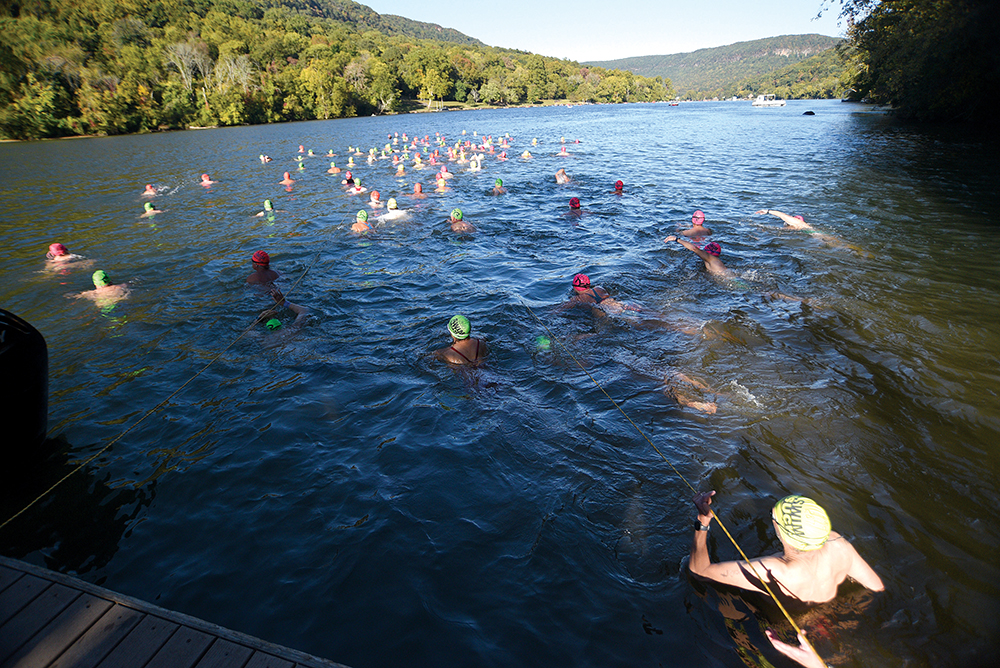 Staff photo by Matt Hamilton / Swimmers begin the 2022 Swim the Suck race through the Tennessee River Gorge. The 10-mile competition is now in its 11th year.

Recently, Smith has turned her focus to making the Tennessee River safer for all users, with a focus on swimmers, who can easily be missed by larger boat traffic on the river. With the increased use of the downtown riverfront, Smith says there's a need for dedicated safe zones to prevent accidents.

"There's definitely more traffic in the river now," she says. "Especially around Maclellan Island there [are] paddleboarders, rowers, open-water swimmers, bass-boat traffic and then the main channel traffic. This is why we have been advocating for a swimming area."

Karah Nazor Rivers, founder the Chattanooga Open Water Swimmers (COWS) group, agrees, saying the number of swimmers in the water has only increased since the beginning of Ironman events in the city. She says there's a need for better understanding by everyone that uses the Tennessee River as it flows through downtown Chattanooga.

"We need to share the river, but it would be good if people were more educated about the fact that there could be swimmers in the water," Rivers says. "Also, a lot of swimmers coming from out of town don't understand the currents, and they also don't know that there's bass fishermen who will be coming down the river. People sometimes just assume it's safe because Ironman is held here."

Smith has plans to meet with the U.S. Coast Guard to address the concerns of the swimming community, and she hopes to see the area's waterways improved just as improvements have been made for Chattanooga's running and cycling community in recent years.

"We've got to come together as a community and create some safe spaces for everyone," Smith says. "If we call ourselves an outdoor city, that includes the water and the river." 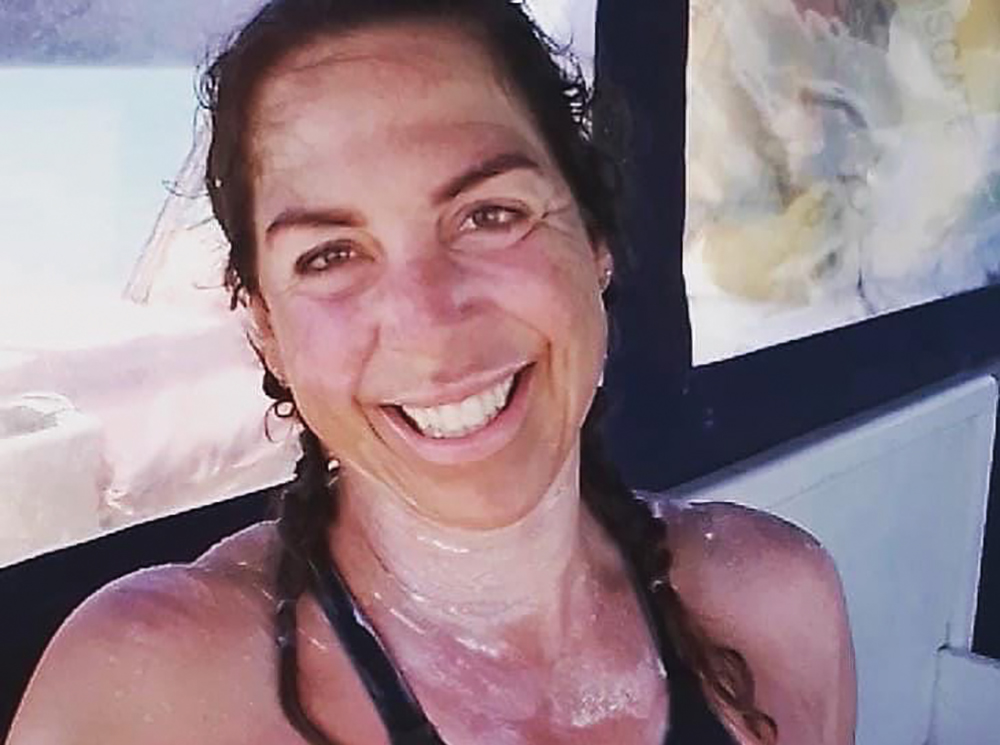 Photo contributed by Jenny Smith / Jenny Smith is all smiles before heading to the final leg of the triathlon, a 180-mile bike ride.

NEXT STROKES FOR SMITH

Smith is currently recovering from her successful completion of the Enduroman Arch to Arc Ultratriathlon, but she's already planning to attack new challenges to add to her resume of accomplishments, which includes numerous long-distance swims.

Perhaps she'll attempt to complete the swim across the Molokai Channel in Hawaii -- her previous attempt was stopped three miles from shore after a group of tiger sharks began to venture too close to Smith. Whatever she chooses to do, Smith says she hopes to continue to build upon her previous accomplishments and build her name in the world of international open-water swimming.

"I'm not a celebrity here in Tennessee, but when I go other places around the world, it's a bigger deal," she says.

In the meantime, Smith continues to work on her form and fitness. Despite all she's accomplished in her sport, she says there's always room for improvement as she looks to the next challenge.

"I still have people look at my stroke," she says. "I still swim with other swimmers in the masters group. You do need to get in a pool with someone to [help make] those adjustments and correc­tions. That's the thing about swimming: It's all about efficiency, and you can't do that by yourself. You can have a feel for the water, but you need someone to help you improve your efficiency." 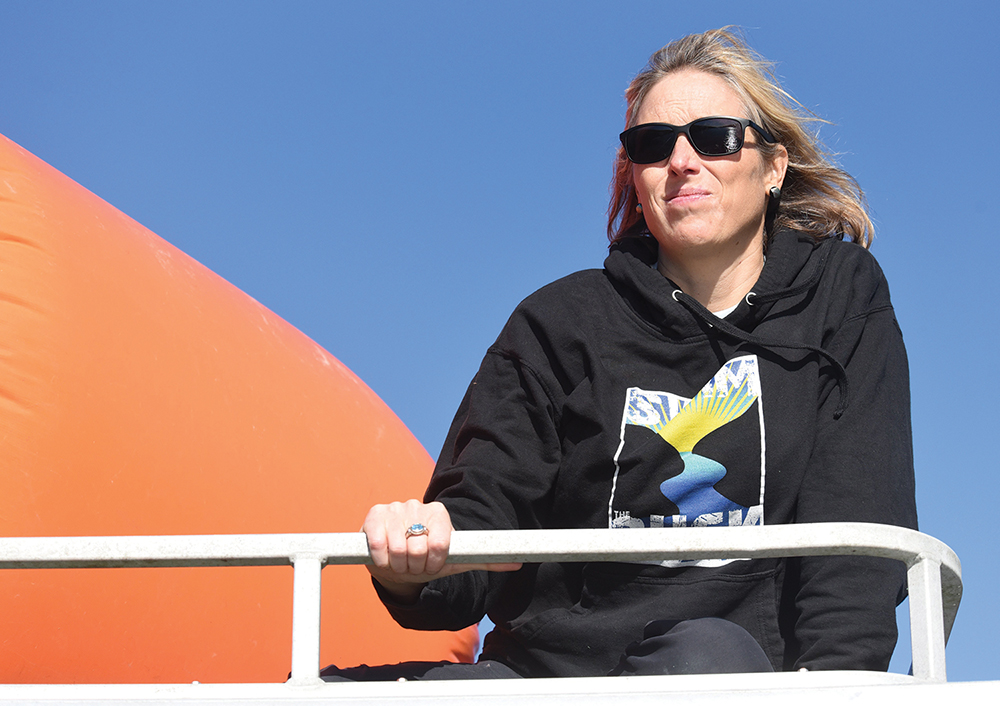 In the past two decades, and perhaps even moreso since Chattanooga began to host Ironman triathlon events in 2014, open-water swimming has increased in popularity in the Scenic City and specifically on the Tennessee River.

Like Smith, Rivers began swimming in Chattanooga as a child, competing in meets run by the Chattanooga Area Swim League since she was 7 years old and later competing in high school. She was introduced to open-water swimming as a college student at the University of Miami where she fell in love with the sport.

"I've always loved the ocean," Rivers says. "I just love the freedom of swimming straight without running into a wall. It's like the difference between trail running versus running around a track."

COWS meets Wednesday nights to swim in the Tennessee River, from April through October. Additionally, the group meets Tuesday and Thursday mornings to swim in Chickamauga Lake near the dam.

Swim the Suck, a 10-mile race held each October in the Tennessee River Gorge, is in its 11th year, and the race has become one of the most popular swimming competitions in the country, with the 125 slots selling out quickly each year.

Baylor Tri-Masters Swimming provides instruction and activities for adult swimmers in a pool setting as well as in the open water. Smith founded the group in 2016, and she says the group meets Mondays, Wednesdays and Fridays and is open to everyone from beginners to more experienced fitness swimmers.

Smith says joining a masters club is the best way for swimmers to improve their skills, especially for those who want to learn more about open-water swimming.

"My advice is always to buddy up, find a friend, perhaps join a masters (swim) group," she says.

— A swim of the length of Lake Tahoe

— Swim the Suck in the Tennessee River Gorge