World Cup prize money continues to be a sticking point for equality in soccer, despite the historic equal pay agreement between U.S. Soccer and its men's and women's teams.

Earlier this year, the U.S. national teams decided to split prize money, which means that the haul from playing in the sport's most prestigious tournaments will be distributed equally between players for both teams — after the federation takes a cut off the top.

It was a landmark agreement, hailed as an important step for equality even beyond sports. But other nations haven't followed suit.

At the heart of the matter is the huge disparity in prize money between the men's and women's tournaments — and how it is eventually passed on by federations to their players.

FIFA has earmarked $440 million in prize money for this year’s men’s World Cup. The winner in Qatar will take home $42 million.

The U.S. women won $4 million from a $30 million pot at the 2019 Women's World Cup. FIFA President Gianni Infantino has proposed doubling the prize money for the 2023 event, but the field has expanded from 24 to 32 teams.

That could change. FIFA secretary-general Fatma Samoura recently suggested that the final prize money total for the women could be greater.

“Today, the men’s World Cup is the one that is funding all the FIFA competitions, including the Women’s World Cup. But we have seen new trends in terms of revenues,” she said at an event in Sydney.

Some countries — including Australia, Ireland, Brazil, Norway and others — have made significant strides toward equal match and appearance fees, but an equal division of pooled World Cup prize money hasn't been part of those deals.

Brazil announced equal pay for its men's and women's teams in 2020 but the agreement pays the women a “proportionately equal” amount — or the same percentage — of World Cup prize money.

In July, Spain's federation also agreed to give its female players a percentage of bonuses equal to the men’s side, as well as earnings from sponsorships, image rights and improved working conditions. It did not reveal specifics. 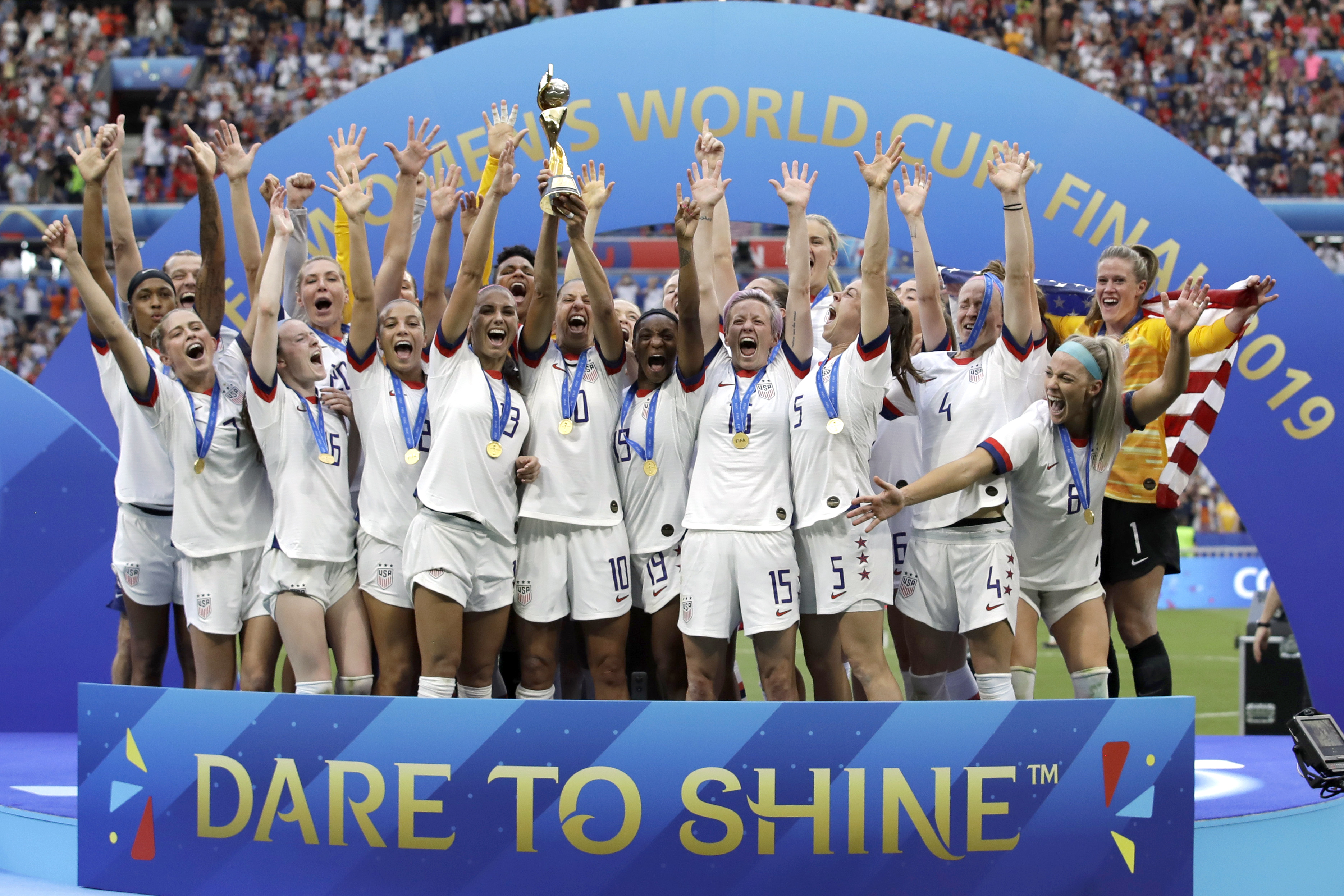 FILE - The United States' team celebrates with the trophy after winning the Women's World Cup final soccer match against The Netherlands at the Stade de Lyon in Decines, outside Lyon, France, July 7, 2019. (AP Photo/Alessandra Tarantino, File)

Lisa Delpy Neirotti, associate professor of Sport Management at George Washington University, said there is a three-pronged approach for equal pay: Public sentiment has to be for it, the women have to be unified in their demands, and the players needs allies, as in the case of the U.S. men's team.

That might be a tough ask in countries like France and Germany, both successful World Cup nations, because the men's team would give up a lucrative payday. France, which won $38 million for winning the 2018 World Cup in Russia, distributed $11 million between the 23 players on the squad.

In contrast, the U.S. women have been more successful than the men, winning the last two World Cups. The U.S. men failed to qualify for the 2018 tournament in Russia.

“If the (U.S.) women continue to do better than the men, it’s not really hurting the men. Even though the men get more, the women can actually contribute just as much if they keep going," Neirotti said. "But it’s not always the same economics in other countries — those other countries where the men go further in the tournament and thus generate a larger prize pool. So obviously the economics of coupling that with women would probably be more significantly hurting the men than the women."

Players like Alex Morgan, Megan Rapinoe and Becky Sauerbrunn tirelessly campaigned for pay equity, spurring chants of “Equal Pay” at the World Cup final three years ago in France and gaining public support. Then the women worked with the men's union to forge an agreement, securing both sides a larger share of the overall prize money after the federation's stake.

U.S. Soccer will take 10% of the money awarded to each team, then split the rest among the players on the two teams’ World Cup rosters.

Australia, which co-hosts the 2023 Women’s World Cup, has instead called on FIFA to equalize the prize pools. The Socceroos, as they're known, will get a cut of the prize money if the team advances to the knockout round. But the federation also has plans to put the windfall into a second-tier women's league and a national women's competition.

Canada's men, currently in contentious contract talks with the federation, have asked for 40% of World Cup prize money, a friends and family travel package and an “equitable structure with our women’s national team that shares the same player match fees, percentage of prize money earned at our respective FIFA World Cups and the development of a women’s domestic league.”

Canada's women have said they do not consider an equal percentage of prize money as equal pay.

“Canada Soccer has been engaged in ongoing discussions with our National Teams, which are and have always been anchored on our values of fairness and pay equity — addressing previously unbalanced standards. That means dollars, not percentages,” Canada Soccer said in a statement. The federation says there has been progress in the negotiations.

For now, at least while FIFA's disparities in prize money exist, getting men’s teams on board is what it will likely take for women's teams to win equal pay, said Gina Antoniello, clinical assistant professor at the NYU School of Professional Studies.

“So how can we get that allyship? Because it’s the right thing to do. Because women’s rights are human rights,” Antoniello said. “It is, I think, a little bit of a delicate balance, to collaborate, but not be pandered to.” 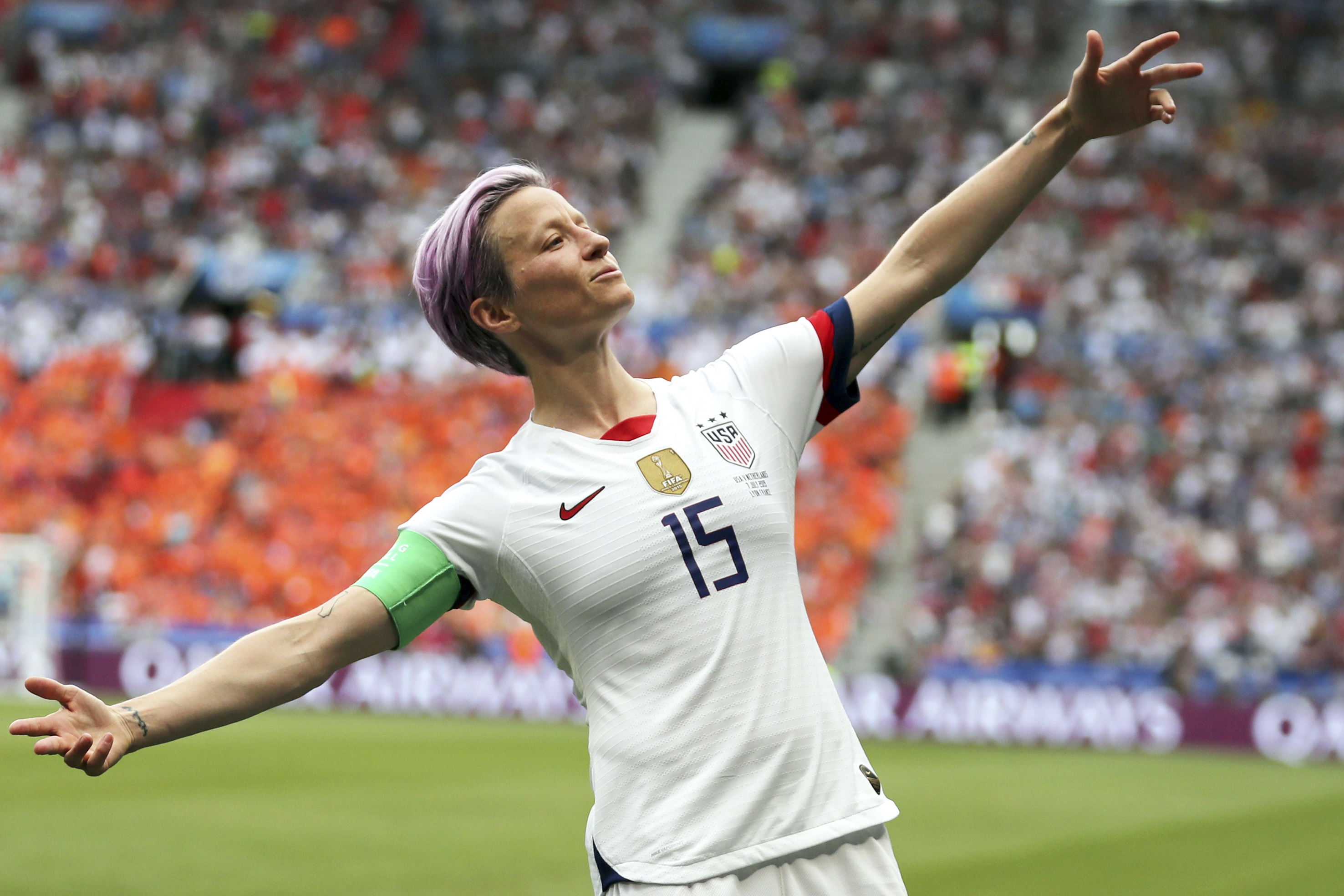